The black day of AMD

The Sunnyvale chipmaker presents particularly dismal quarterly results, with a large revenue drop and a loss of 180 million. Do theRadeon Fury will save her, before it's too late?

It did not really surprise anybody, considering that AMD declared and warned about it two weeks ago, but it's still not pleasant to see one of the two x86 chips (sorry, VIA) and one of the only two video card keys we have left, Presents an economic situation Which is quite difficult to describe in any way other than 'crash'.

In the second quarter of the year 2015, broke AMD A personal negative record close to a decade when revenue was less than $ 941 billion - $ 35 million, to be exact, which is a 2014 percent drop from revenue in the second quarter of 181. Low revenue also left its mark on the bottom line, with a net loss of $ 180 million, joining a loss Net of $ XNUMX million it recorded AMD In the first quarter of 2015.

The whole latest economic report contains very few bright spots, but when you look specifically at the field of processors and video cards for the domestic market - you find that the situation is particularly difficult, with a loss of $ 147 million (!) Based on meager revenues of $ 379 million. In other words - the vast majority of the money it loses AMD Comes from the home market, which accounts for only 40 of the company's revenues. For comparison, just a year ago, in the same quarter the same entry into the household products division 828 million, lost in the bottom line 6 million only. 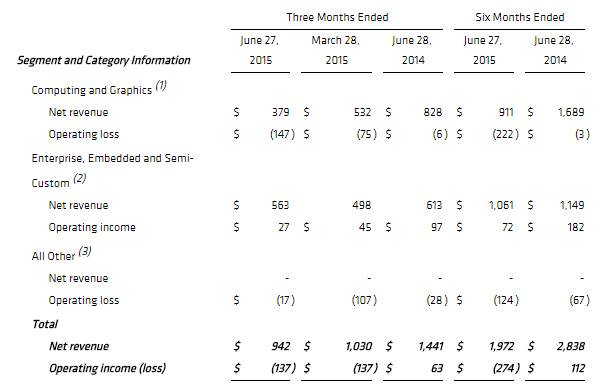 In fact, if it weren't for the enterprise enterprise chipset and custom chips (those on the Xbox One and PlayStation 4 consoles) that maintain easy profitability and more or less stable revenue - most likelyAMD Would have reached the point of collapse (or point of sale to another company).

Does AMD's future continue to be in real danger, much more than we have expected to date? With the new Zen architecture Is at least a year away from commercial products to the enterprise-enterprise market, and at least a year and a half from the home market, it seems that the company's main opportunity to get back to normal (as much as possible) is through its new graphics cards, The Radeon Fury cards To the high market, which has relatively higher profitability. The Fury X models And the Fury launched can be competitive,AMD They will need to pull out some more "aces" to ensure that revenue continues to reach beyond the launch months, when the buzz and limited amount are doing their thing.

According to the latest reports in the next month we will see AMD also launching the The Hidden Radeon R9 NanoAnd we have no choice but to hope that he will stand up to the grandiose declarations of AMD - and will constitute a significant and unique reinforcement of the company's graphic processing line.