The generation of processors to replace the Skylake Will not turn worlds, but still should provide some important upgrades to consumers

The year 2016 is emerging as a year to see whether AMD still has the ability to compete with Intel in terms of performance and not only in terms of price, The new Zen architecture But also 'thanks' to the delay in switching to a new lithograph of the 10 nanometer, which it announced Intel Officially some time ago.

This delay, which will bring us the Cannonlake processors only in the second half of 2017, created the intermediate generation that will be the third in 14 nanometer lithography and will be called Kaby Lake. Now, a pair of new slides Who came to the network First details about us Skylake replacements.

The Kaby Lake Generation Will be accompanied by a new generation of chipsets of its own, the 200 Series, which will be named Union Point and will also be based on the current LGA 1151 chassis. In fact, it is very possible that the 1151 will become more lifelong than any of its sisters since the gay LGA775 days due to the existence of Kaby Lake and it is also natural that the first 10 generation will be based on the LGA1151 Intel.

The new generation will offer Processors Desktops in thermal envelopes of 35 watts, 65 watts and 95 watts, in the same way as the current generation - which probably ensures that the number of processing cores in the different models will also be the same as what we know now. We are guaranteed an improvement (relatively minor, probably) in the overall processing cores and also an improvement in the built-in graphics core capabilities, of course, which this time will offer support for 5K resolutions, and H.265 and VP9 video-compression standards with up to 10-bit depth. 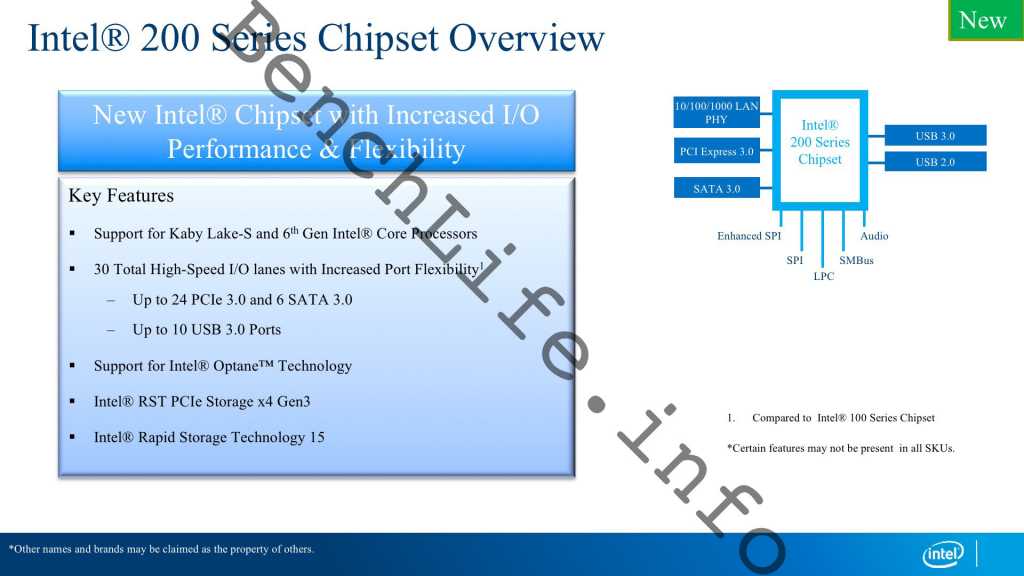 Kaby Lake Support for DDR4 and DDR3L memory at enhanced base speeds of 2,400MT / s and 1,600MT / s respectively, support for the Thunderbolt 3 standard (still based on a dedicated chip, and not unfortunately structured), improved processor capabilities for processors with locked product Wider spectrum to full range BCLK made a comeback in Skylake?) And support for Intel's intriguing Optane technology, which is supposed to be the first commercial and practical application of 3D Xpoint revolutionary technologyWhich she unveiled this year.

For dessert, the Kaby Lake generation also has support for Intel's Rapid Storage technology for SSX-based XXUMXX2 PCI Express 3.0XUMUMX-based SSD drives - and an important increase in the number of PCI-Express 4 channels coming from chipset to 3.0 (compared to 24 in the current Skylake generation), which is supposed to become SSD drives in this interface Popular and much more popular. It should be mentioned that these are drives that can provide speeds of close to 4 gigabytes per second (!), So that a change that should allow these products to become mainstream products instead of current market products is certainly considered one of the main upgrades Kaby Lake.

The Kaby Lake processors are expected to reach us at the end of 2016 - ostensibly next to the first processors based on the spoken Zen architecture of AMD. We are looking forward to examining the capabilities of these models head to head, and we hope that the result will indeed create much better competition in the hardware world.