The red chip developer posters for this day also include one small, inexpensive processor that is a wink for advanced users on the one hand, and a budget bucket service on the other - get to know Athlon 3000G

The notebook market is not entirely flashy products in the hundreds and thousands of dollars, andAMD Realize this. Sometimes markets also need to have processors with minimal processing power to perform common tasks.

Athlon brand of AMD Just like the Pentium brand Intel These days, he focuses mainly on basic and accessible entrance products. We get a reminder that the world of desktop computers does not start with Ryzen 3 but rather with processors Athlon Simpler. 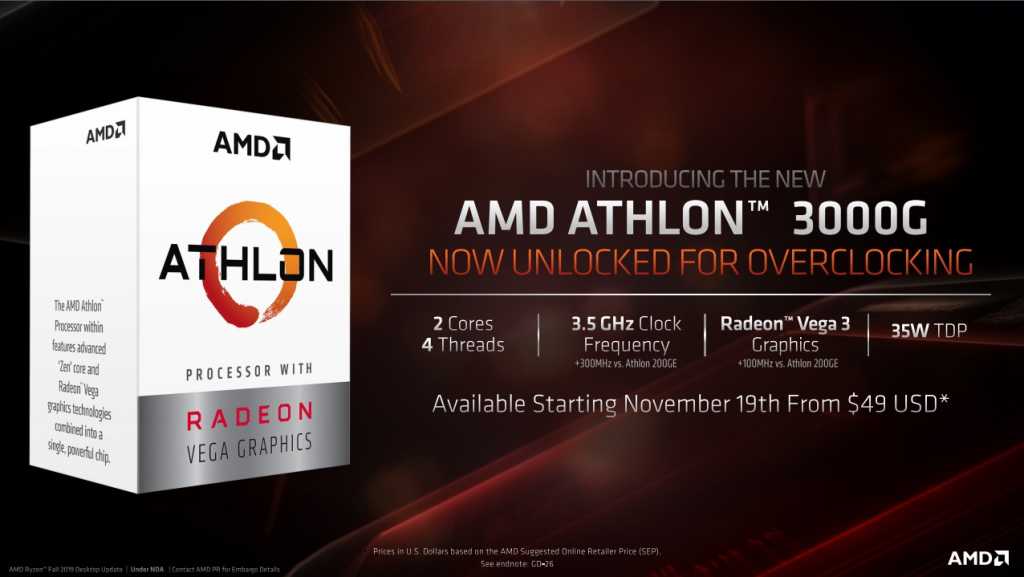 The Athlon 3000G is a new processor with 2 cores and 4 capillaries. It is based on Zen Plus architecture AMD And manufactured in the 12 nm process. This processor actually replaces the Athlon Last year's 200GE comes with a number of improvements.

One is a more serious heat sink in the packaging. While last year's 200GE processor came with simple cooling that meets the requirement of an 35W heat casing that processes this, the Athlon 3000GE comes with the Wraith Stealth cooling of AMD, Cooling that comes in packaging of Processors Rated for 65W.

Not for that. The Athlon 3000GE will come with a fully open frequency multiplier out of the box and will allow The fast As manual as possible under the circumstances. Also the graphical core type Vega The built-in 3 that can be improved by using a frequency accelerator.

So in fact, AMD Manages two different audiences with this product that retains a price tag of only 49 dollars (about NIS 200). One audience, of course, is the one who can settle for such a processor - computers for home theater, office, Internet browsing and movies, for example. From the other side, would be great to put up Cooling Even more advanced air on this processor, place it on an advanced motherboard, and see how much frequency it can be squeezed while the power consumption remains under control.

For just 49 dollars, many may want it not just as a backup processor, but simply a toy for overclocking games. The sane audience will of course also benefit from the fact that the processor now comes with Cooling More advanced than the box and more processing power.

Today's biggest competition for the Athlon 3000G comes from past generations AMD. The Ryzen 3 2200G with a core 4 core and a significant Vega 8 advanced graphics core can be found at quite desirable prices, and is soon expected to drop below the tax line and reach you at only NIS 300. The percentage difference is great, and there may be some who still prefer theAthlon Little.


Wait, there's more!
Join To the group of zon And you can receive exclusive updates on various offers on the net, share content that you find interesting, consult with members of the site, and more - Join now!
Tags
AMD Athlon Zen attitude
Share
Facebook Twitter LinkedIn WhatsApp Telegram

Living in the Green: Razer's 2020 Renewal

Living in the Green: Razer's 2020 Renewal