Today officially launches into the world air motherboards with the B550 chipset AMD, Many have been waiting for almost a year. This is the second chipset that comes with standard support PCI-Express 4.0 after X570 Launched in July of last year.

The B550 took a long time to hit the market, and many expected it to happen as early as last year or early this year, as not everyone wanted to upgrade to the serious X570 for one reason or another - and yes, a fan on the chipset is one of them. In addition, we know that there are those who care about the support of the generation of future processors, and although today we know that last year's chipsets will also support them, it is always good to purchase Motherboard New if the price justifies it.

The B550 is a chipset with a very different approach to what we have known so far in the motherboard market, or at least in recent years. AMD Decided to have one chipset that would control most market segments, but on the other hand would still be positioned below the X570. The way she did it was to leave the chipset with תקשורת PCI-Express 3.0 to its interfaces, but allow the processor to continue to support the advanced 4.0 standard to the video card interfaces and volumes in M.2.

How much and how much did she leave AMD To the various motherboard manufacturers. As a result, there are motherboards based on the B550 chipset from $ 90 up to $ 300 right now. Who knows, maybe even more expensive B550 boards will be launched soon. Their differences are the same differences that can be found on any other platform between Motherboard From $ 90 to $ 300. B550 allows Overclocking, And therefore very similar to the X470 for example. 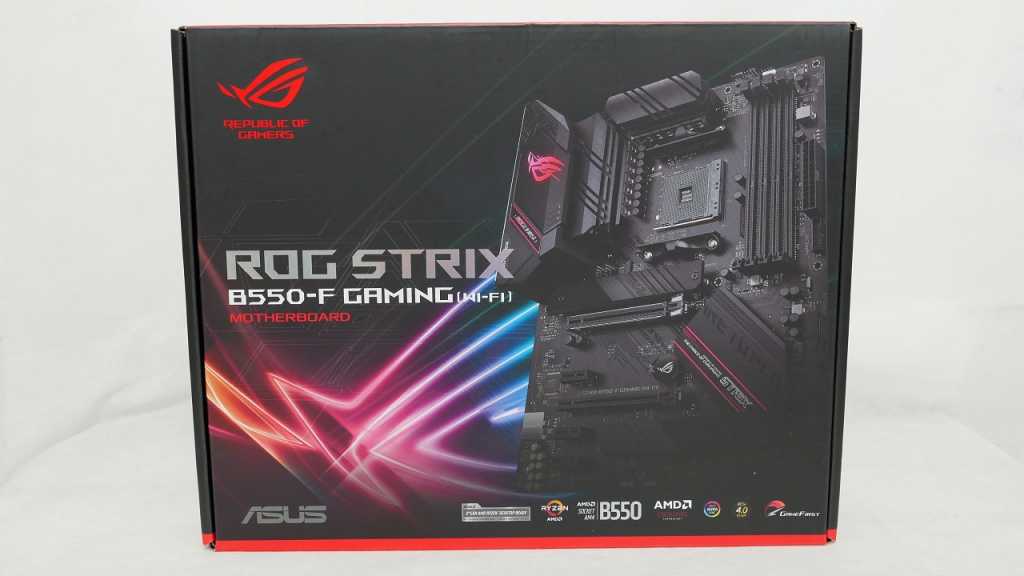 The Asus ROG STRIX B550-F GAMING WIFI is Motherboard Which takes the fresh chipset relatively high. This is a motherboard that is priced at $ 210, but on a scale of 90 to 300 it is definitely at the top, but not the "excessive" of advanced motherboards. The most advanced of Asus With this chipset is theB550-E. 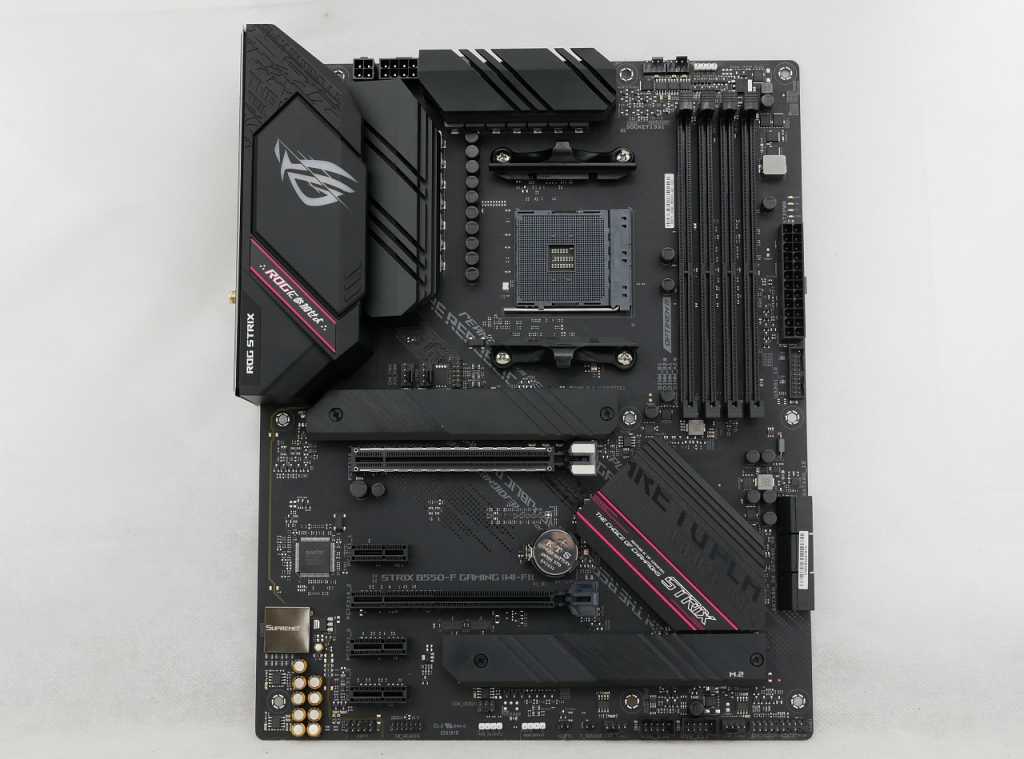 This motherboard comes in a standard ATX configuration. You won't find much here beyond a fairly standard output array, with a bit of color and STRIX switching bracket. Integration Degrees in STRIX Panels Asus Both A is the cheapest, H is the medium, F is the advanced, and E is the leading. You will not always find all the ranks in every chipset, but order still exists. Specifically, this is a STRIX model B550F-GAMING with WiFi, this is a version that costs $ 20 more than the one without the wireless communication. 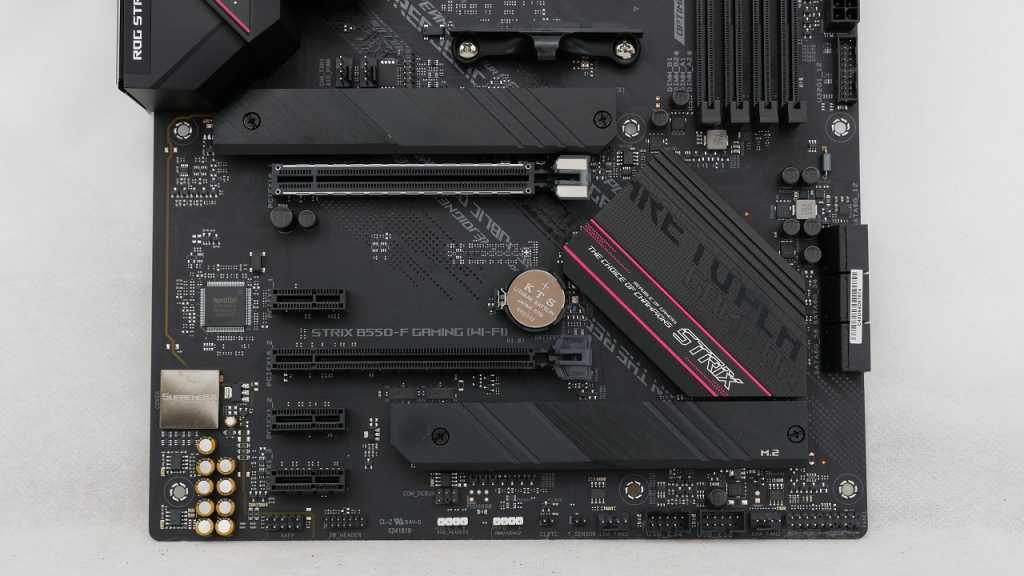 Boards in the B550 chipset only support Ryzen 3000 processors and this does not include APU processors such as Ryzen 5 3400G or Ryzen 3 3200G. Meaning, purely Processors Zen 2 architecture based. Motherboard It will also support the series RYZEN 4000 to be launched in the future. The interfacePCI-Express The top X16 along with the top M.2 interface support standard 4.0. All other interfacesPCI-Express Various, together with the additional M.2 - support the 3.0 standard that comes to the chip system, for your attention. It's actually the big divider between the B550 and X570.

Apart from the familiar audio interfaces, there are HDMI 2.1 and DisplayPort 1.2 display ports that will be used for processors with built-in graphics cores to be launched in the future. The network port is at a speed of 2.5Gbps on the i225-V controller Intel. The four portsUSB Blue is 5Gbps, while red and Type-C are 10Gbps. Both portsUSB The blacks are in the old 2.0 standard and are generally recommended for peripherals. There is a Bios reset button nearby, and a connection to the Wifi antenna that comes in the box. The Wifi is based on the advanced AX200 controller, and there are also Bluetooth In the 5.1 standard. 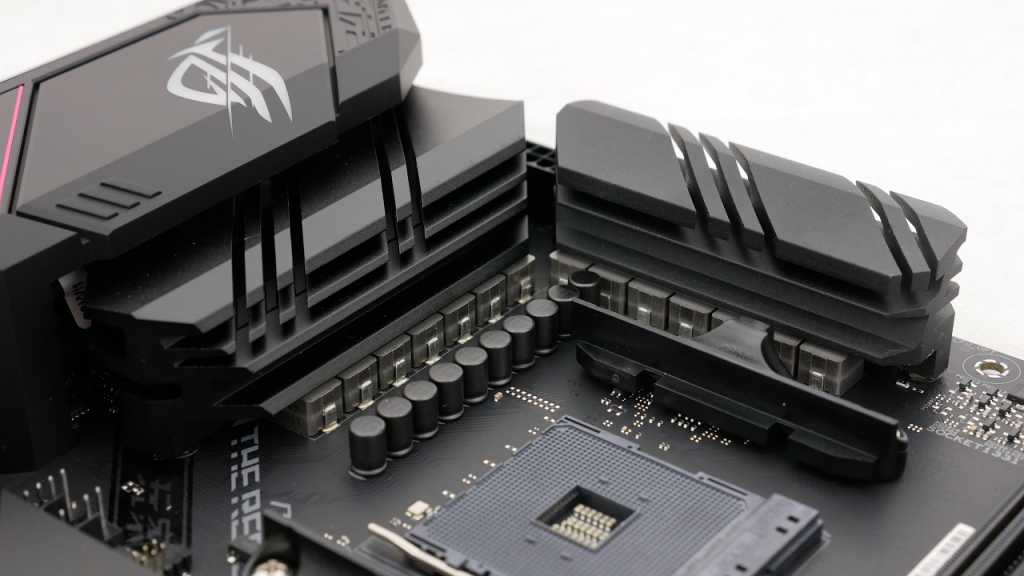 The power supply system for the processor is quite good in this motherboard. It contains 8 stabilization stages for the CPU cores, and 2 additional stages for the IO controller inside the processor. Each core installation is rated at 50A for a maximum current of 400A. This is a pretty good ability but not particularly impressive. Yes this is an upgrade over everything we saw in the first generation of boards AM4, And much of what we also saw in the second generation of tablets. In terms of residency AM4, This motherboard is located in a good place in the middle, but technically far from advanced boards for speed in the bracket. 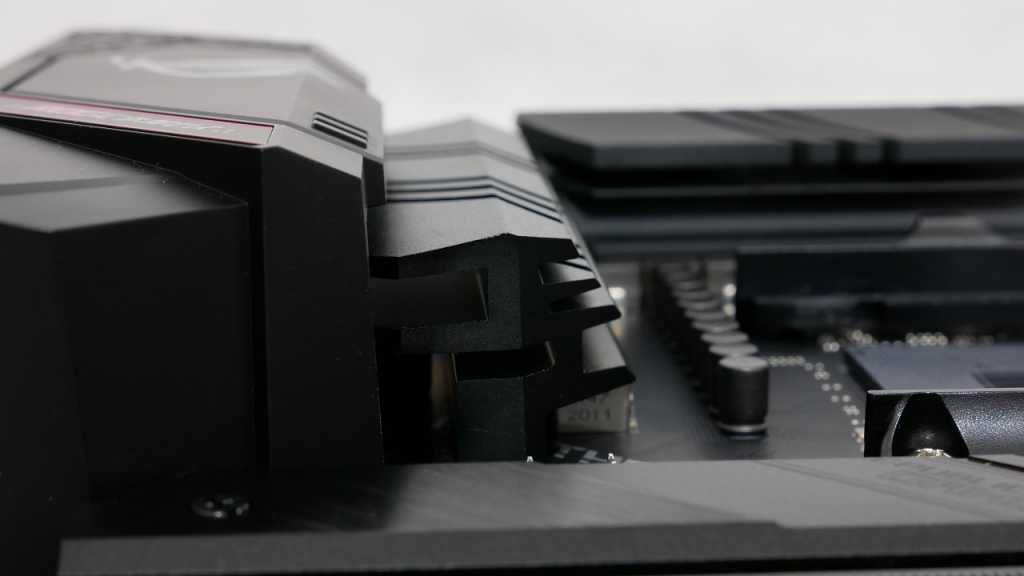 The heat sinks on the voltage stabilizers have an acceptable surface area. These are not thin aluminum fans here, and there are no copper pipes here, but there is no problem with these heatsinks. For testing, we installed a processor RYZEN 9 3900X has 12 cores in this motherboard, and we tested it with maximum effort after an hour. The temperature of the stabilizers did not exceed 75 degrees Celsius without air flow on the heat sinks with a room temperature of 25 degrees Celsius - this is a pretty good result. 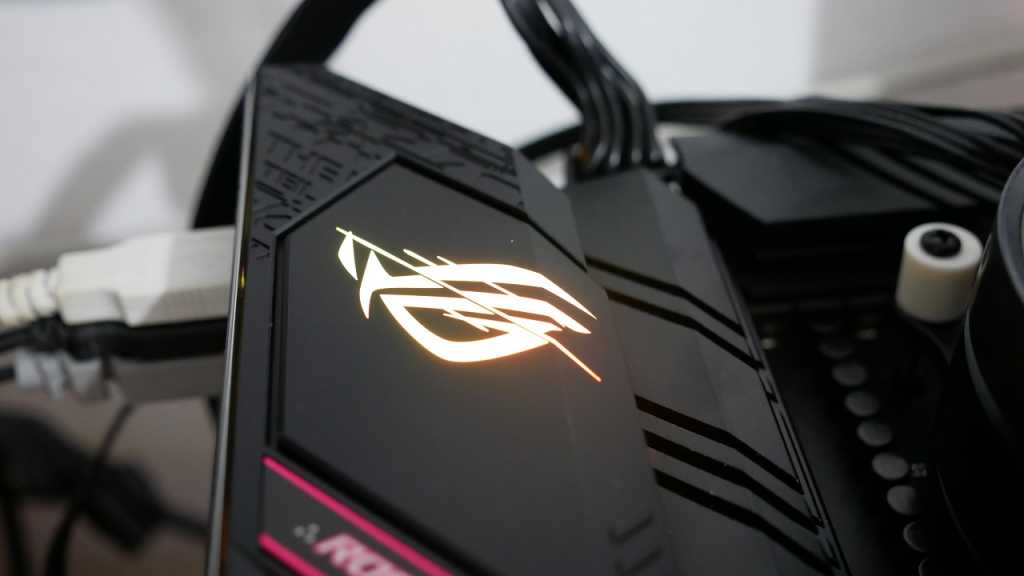 There is also RGB in the form of a ROG logo over the heatsink heaters. You can control the lighting of the logo through the Aura software Asus. 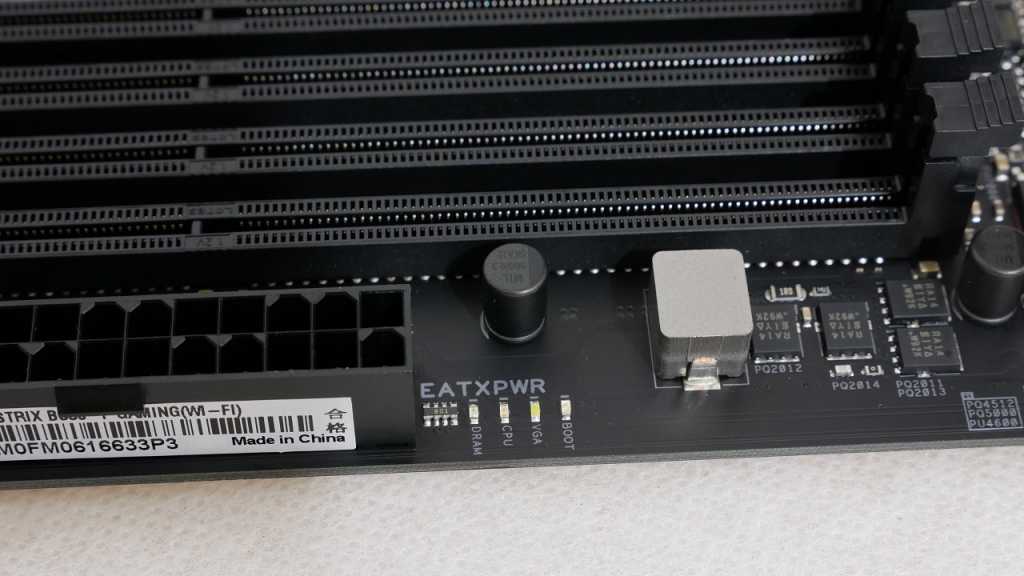 When it comes to troubleshooting and dealing with boot problems, there are several lights next to the 24-pin connector on the motherboard that light up when testing these components in the computer boot. If there is a malfunction in the video card, processor or memory, the light will remain on. Unfortunately, even at a price of over $ 200 this motherboard does not include a 2-digit LCD monitor for troubleshooting. There is also no power button on the motherboard itself - for your attention.

Who did you call mid-market?

Obviously - there are still some features that will save users, in this case a standard PCI-Express 4.0 for all devices. Still, limiting to a single video card and an M.2 drive for a device are sometimes all a user would ever want from a motherboard, and specifically this is what STRIX B550-F GAMING provides.

At $ 190 for the Wifi-free model, and $ 210 for the Wifi, it's all about the mid-high-end market, those who are ready to add a little over a previous generation, or an advanced B450 chipset, for example, to get something transmitting Flagship. 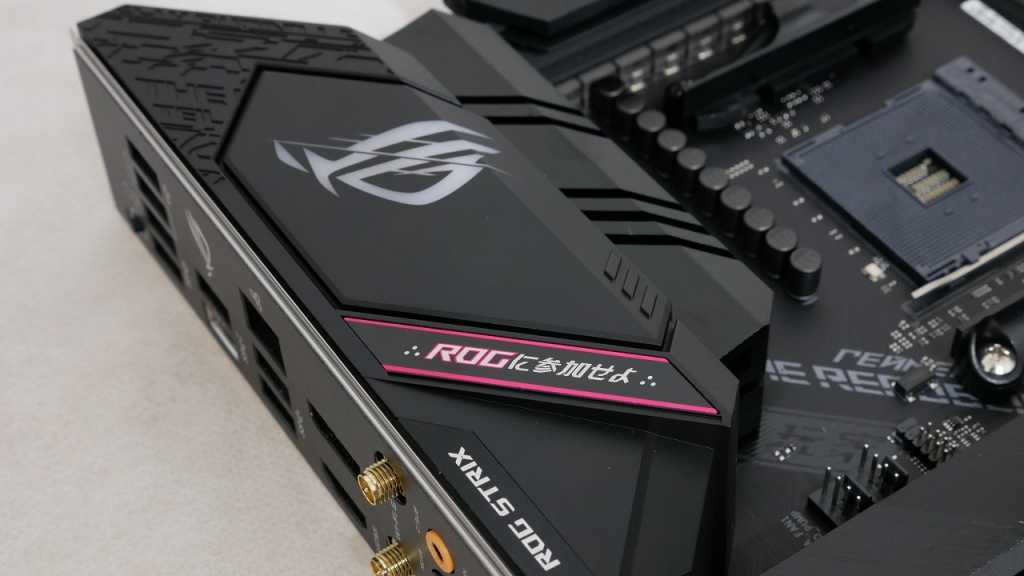 Without advanced overclocking aids, the B550-F puts itself at a point that caters primarily to those who plan to play lightly in bios, but only to activate the PBO mode of AMD Process and move on. $ 209, or about 950 shekels, the STRIX B550-F GAMING should be the highest point for a user who wants a lot without exaggerating, but retains potential Overclocking And support forPCI-Express 4.0. I would be happy if the voltage stabilization system was made of more than four split stages, an array of five split stages (10 actual) for the CPU cores would upgrade the board's acceleration capabilities rating.

If we look at an X570-based board that comes up similarly, like the Asus Prime X570 Pro, we find that in each model there will be models that prefer things in the corresponding model. For example, the B550-F benefits from a visitor Network Faster, and the fan saving is small on the chipset. On the other hand, all of the X570 Pro's PCI-Express interfaces are 4.0 standard and contain an interface USB Type-C for enclosures. The overclocking capabilities of both are quite similar. 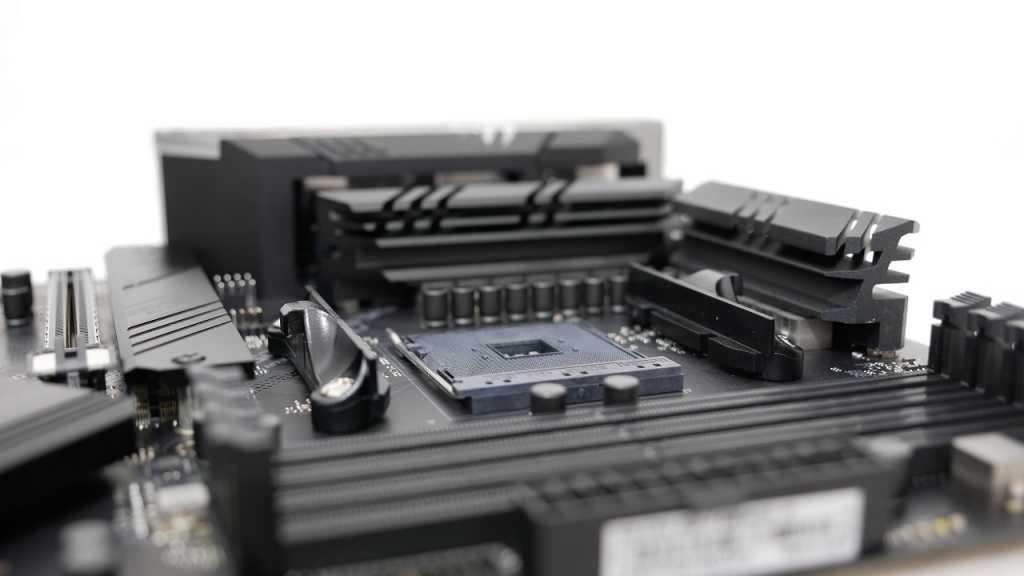 We will leave the consideration to you on the subject. One thing is for sure, the Asus STRIX B550-F GAMING is not Motherboard Bad at all. $ 20 is a fair addition to high-speed Wi-Fi, but if you don't need wireless communication at $ 190 or about NIS XNUMX after taxes, that's a fair price for a new, advanced motherboard.