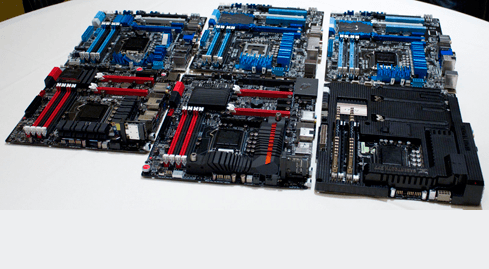 22 's nm processors Intel On the way, and with them a new generation of motherboards. Let's see what Lassus will offer you

deja vu? Just a little over four months ago we ran into In a pile of motherboards New וAdvanced One of the largest manufacturers in the business that accompanied the launch of The Sandy Bridge-E processors וNew chip set X79And here it is New generation processors Added from home Intel It's just around the corner - and with it, of course, a new generation of motherboards that will be based on the Panther Point series chipsets.
We are here to introduce you to a part of the call-up prepared by the leading motherboard manufacturer in the field, Asus.

The "tough" Sabretooth family of Asus Returns to another round, and with it comes a comeback the unique Thermal Armor that made its debut on the Sabertooth P67.
Thermal Armor is a hard shell that covers the face of the motherboard and should provide performance Cooling And improved heat dissipation in addition to better protection for the components themselves. To date, we have not seen conclusive evidence of the upgraded efficiency of this thermal shell, but it certainly gives the motherboard an unusual look that some potential buyers will like.
The latest version of the Sabertooth features features such as covers for the various expansion slots on the motherboard designed to prevent penetration of dirt into them, six ventilation slots in strategic positions that allow airflow through the board for the purpose Cooling More efficient and also able to cause the system fans to continue rotating for a while after its shutdown, for faster cooling.

Apart from the thermal armor, you can find four memory slots in the Sabertooth Z77 DDR3, Pair PCIe 3.0 X16, PCIe 2.0 X4 slot, three PCIe X1 slots, support for multi arrays graphic cards, SATA technology support and a generous number of SATA II and SATA III connections USB 2.0 andUSB 3.0, of course.
For those who have forgotten,Ivy Bridge Based on the LGA1155 chassis that is identical to the current Sandy Bridge processors and can serve them as well,Ivy Bridge The future.

The MicroATX boards continue to gain popularity, and Asus will try to prove that gaming is not a dirty word for them with the Maximus V Gene, which despite its limited size is based on the Z77 chipset and will include four memory slots DDR3, A pair of PCIe 3.0 X16 slots, an "open" PCIe 2.0 X4 slot (shorter than the X16 connections), physical BIOS control buttons, a pair of SATA III connections, four SATA II connections, six USB 3.0 connections, audio in SupremeFX III technologies separated At the level of the printed circuit board from the rest of the board to minimize interference and noise, a combination of a mini PCIe slot and an mSATA slot that rises from the board and can accommodate, among other things, expansion cards for Wi-Fi connectivity, drives SSD And the like, voltage measuring points and pretty much everything you would expect to find in a full-size motherboard and even larger - in a nice little package.

The Maximus V Gene's older brother is also based on the Z77 chipset and offers four memory slots DDR3, A pair of PCIe 3.0 X16 slots, an "open" PCIe 2.0 X4 slot, a PCIe 2.0 X16 slot, three PCIe X1 slots, a generous number of SATA connections andUSB From the second and third generations, a variety of monitoring capabilities and control of system characteristics, the same "combo" unit mini PCIe and mSATA as in Gene, a new audio technology that programs SupremeFX IV that also includes separation from other board components and special "audio capacitors", aluminum shield And even an external amplifier that will come along with the board called ThunderFX.

Another unique feature of the Maximus V Formula is body Cooling (VRM), which includes built-in water cooling preparation. It is likely that most users will never really need to use this option, but its very existence will surely spur to the enthusiasts The fast many.
as Which we reported A few days ago, the launch of chipsets and motherboards for the next generation,Ivy Bridge (If there are no unexpected surprises), then we'll probably also find out when these models are coming out Asus And how much the whole story would cost us.