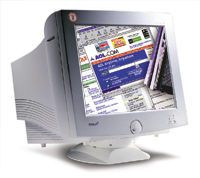 Most of you are probably using a computer screen. Even at this moment…. (What not?!)
Have you ever wanted to buy a screen, but you did not really understand what they want from you with all these concepts?
Keep reading, and you will know everything…

Most of the screens sold today are based on cathode tube (CRT, Cathode Ray Tube) while computers Mobile It is mainly used in Liquid Crystal Display (LCD), which has also entered the desktop market.

When you come to buy a computer, there are some data that will always appear: