The company is launching an updated version of its small gaming mobile, which will come with a unique stand for an external desktop video card that will allow you to bounce performance in an instant

Company Alienware, Which specializes in desktops and laptops for gaming, unveiled a few days ago the smallest gaming laptop it has ever introduced - theAlienware 13. With the initial price of 999 (about NIS 3,800), the Alienware is a small version of the PC.Alienware 14, but with one very important twist. Along with the small gaming laptop, the company presents a concept that may have been seen before, but today comes with a much better and more effective implementation than ever before. Named "Alienware Graphics Amplifier", the company enables the laptopAlienware 13 Connect to external desktop video card for drastic performance increase. Among the cards that the company is putting into the new amplifier, we can find the PNX 760, 970 and 980 cards.

Specification (the most powerful configuration that can be built)

At the initial price of Alienware 13 gaming laptop, which stands at 999 dollars, the company introduces a computer with a processor Core i5 4210U dual core, the Windows operating system 8.1, 8 gigabytes of זיכרון DRR3L and 500 GB of RAM זיכרון Internal HDD. Unlike his older brother,Alienware 13 comes in less than one inch thick and weighs almost a whole pound less.

According to the company, the cooling system of the graphic amp works best with basic fans of video cards, the main reason that the company began to offer the amplifiers with video cards of the company NVIDIA, But Alienware emphasizes that the amplifier also supports based video cards AMD. According to the company's introduction of the product, it seems that the new amplifier is currently working only with the laptop,Alienware 13, but we speculate that because of the special connection the amplifier uses to connect to a laptop, support will only come to future computers for the company's gaming laptop family. Using the graphics amplifier with the computerAlienware 13 requires a reboot of your computer, not a particularly troublesome thing but not an ideal thing for changing fast situations between mobility and stationary. 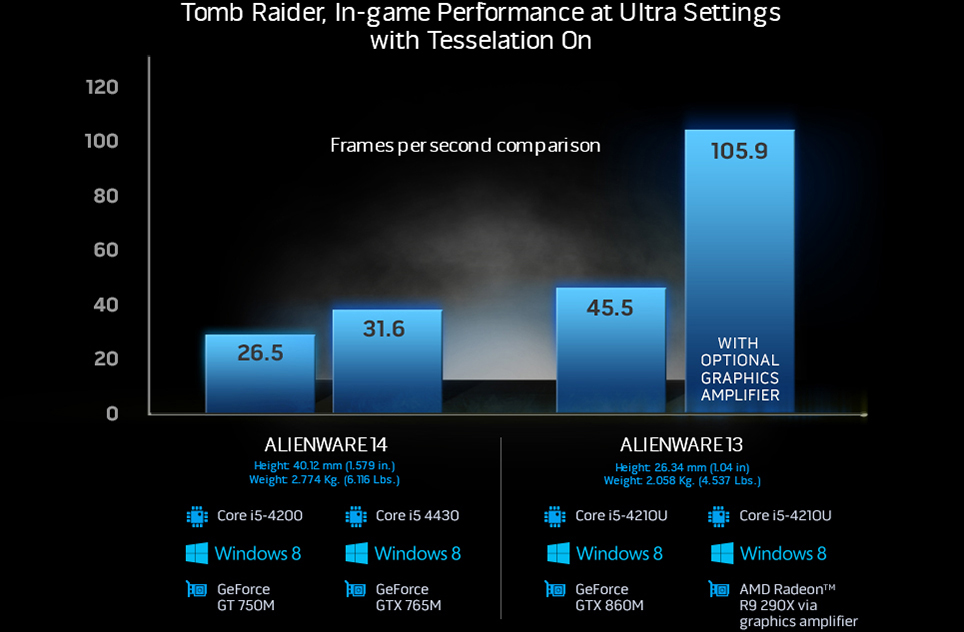 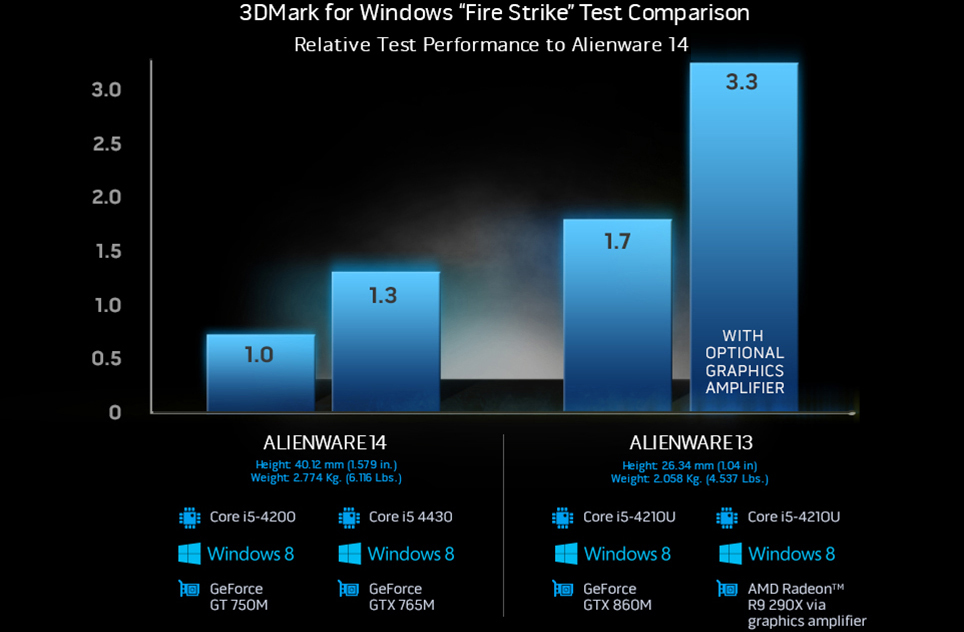 The company is starting to market the graphics amplifier from its product at a starting price of $ 300 (about NIS 1,120) for the structure of the amplifier only, with an additional payment for each graphics card that the buyer will want to put in, which stands at 260, 365 and 660 dollars for GTX 970 cards. GTX 760 and GTX 980 respectively. In performance tests conducted by the company, the connection of the new graphics amplifier to the Alienware 13 laptop shows a 2x increase in performance than what the same system would have achieved without the graphics amplifier. Not only does this show a welcome improvement for gaming laptops that usually need to compromise on performance due to their size and designation as computers Mobile, But it can also be taken from the fact that the future of mobile gaming is going to gain considerable momentum in performance thanks to the trend of amplifiers in graphs that the company can create.