The AORUS 15P with RTX 3070 is the first laptop among a series of laptops to be tested at HWzone in the near future and for this purpose we are building a completely fresh results database. For the 15P we set up a fairly standard computer system in terms of price with a pair graphic cards That match the performance area you get from it:

We examined these two video cards because they represent dominant performance points in the mid-market world today. The GTX 1660 SUPER is a video card for the masses for a little over a thousand shekels, whileRTX 2060 SUPER is considered a higher grade at a price that is close to double that (at least on the slightly brighter days before the cryptocurrency panic).

And now for getting acquainted with the graphics core that is inside this AORUS 15P, plus thanks to Techpowerup who sewed at our request a GPU-Z version which supportsRTX 3070 Max-P:

God-RTX 3070 in the laptop version, although its name does not correspond in its hardware composition to the desktop version and this is something that is very important to emphasize. This is a GA104 core as in the desktop version, but the amount of active processors is significantly lower. B-RTX 3070 Desktop We have a composition of 5,888 CUDA processors with 46 RT cores and 184 Tensor cores. Here we find 40 RT cores and 160 Tensor cores.

Also, the operating frequencies themselves are lower, especially during exertion. With its increased core composition, the desktop RTX 3070 can easily maintain frequency Core Total of 1900MHz and above. 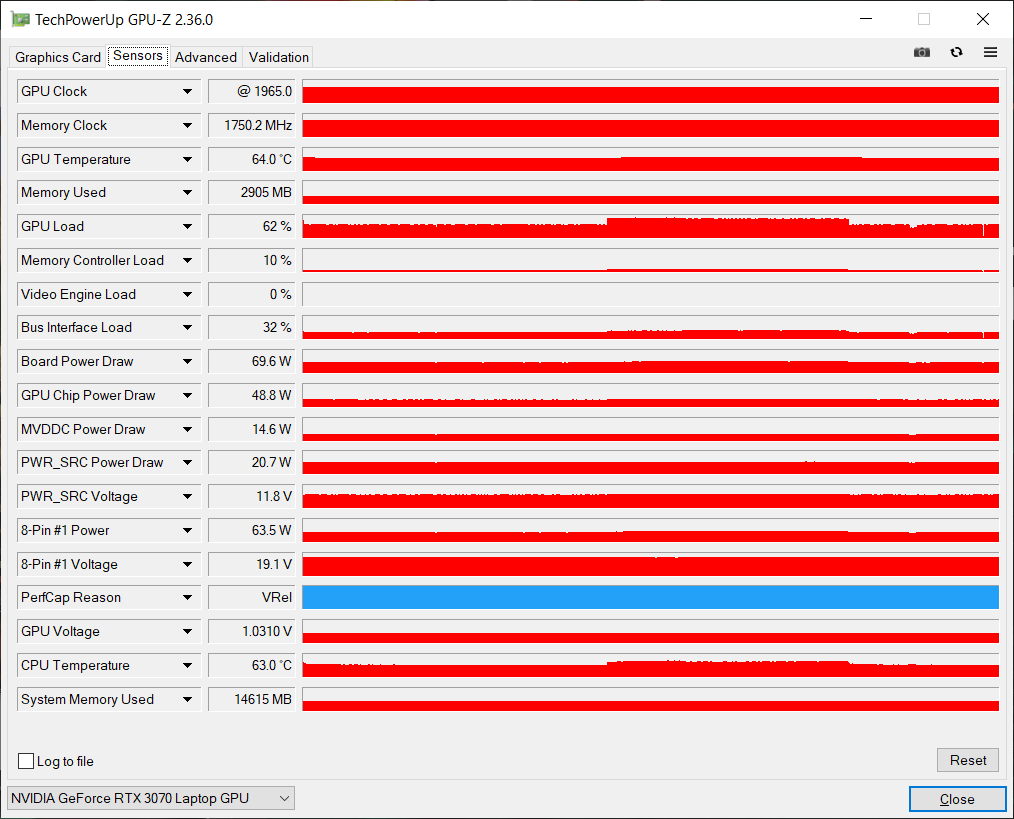 During an effort I was quite upset, the graphics core of the computer Mobile It will operate at a relatively high frequency of 1950MHz and even higher. Admittedly, once the entire computer system is adopted in an intense game the operating frequencies will be lowered accordingly. It is important to remember that a joint effort of the processor and the video card will cause the large heat sink to heat up faster. The average operating frequencies we saw for the video card after an effort time of 15 minutes or more was in the 1700MHz range.

Another clarification before approaching the performance tests is that they were done in 1920X1080 resolution and so will the upcoming laptops tests. Specifically, we chose quite demanding titles for this resolution that is common to a lot of gaming computers we are about to see.

It is important to know that the performance tests for 15P and computers Mobile More in the future, at least in games, we Special Deals Even when the computer is on a standby time of more than 15 minutes and its operating frequencies are balanced. Sometimes short performance tests can be misleading as the computer does not have time to reach a balance of temperature and operating frequencies. 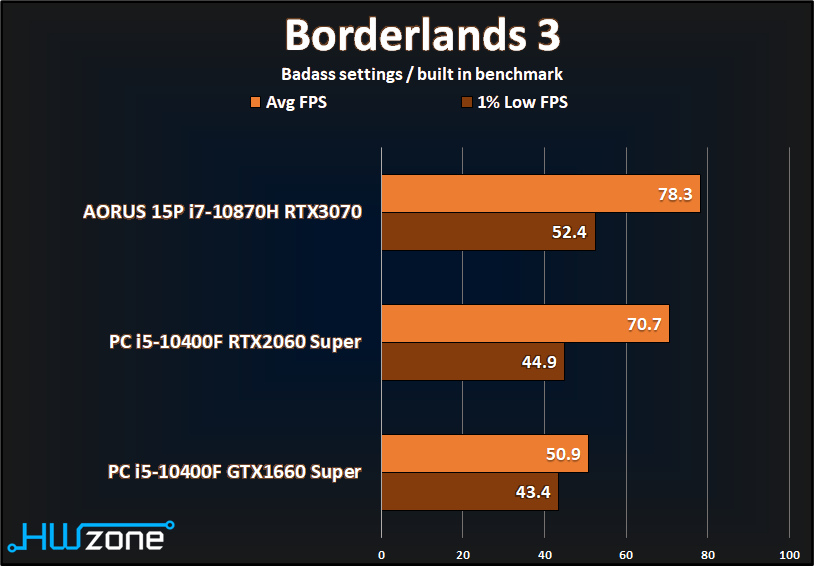 In the game Borderlands 3 you can see that the 15P with RTX 3070 has resulted in a performance that is about 10% higher than that of our desktop computer with RTX 2060 SUPER. Given the configuration and size, this is a very respectable result. To put it mildly, this is a pretty exotic version of this video card. 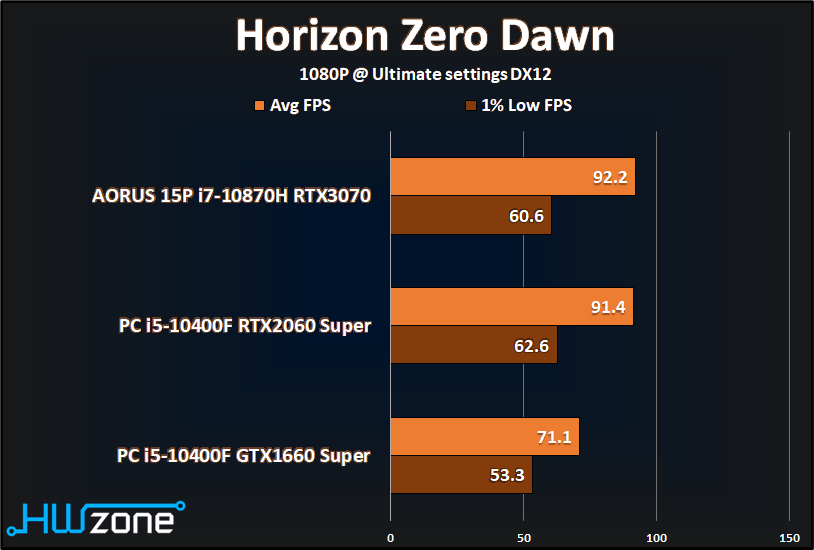 In the Horizon game our laptop performance is practically the same as the performance of the desktop computer with RTX 2060 SUPER. We think one of the reasons for this is mainly the serious load on the CPU. While the i7 10870H is an 8-core processor, at effortless its operating frequency is relatively calm and in games like this it will usually spend around 3.4GHz. In contrast, theCore The i5 10400F will spend around 4GHz despite having two less cores. 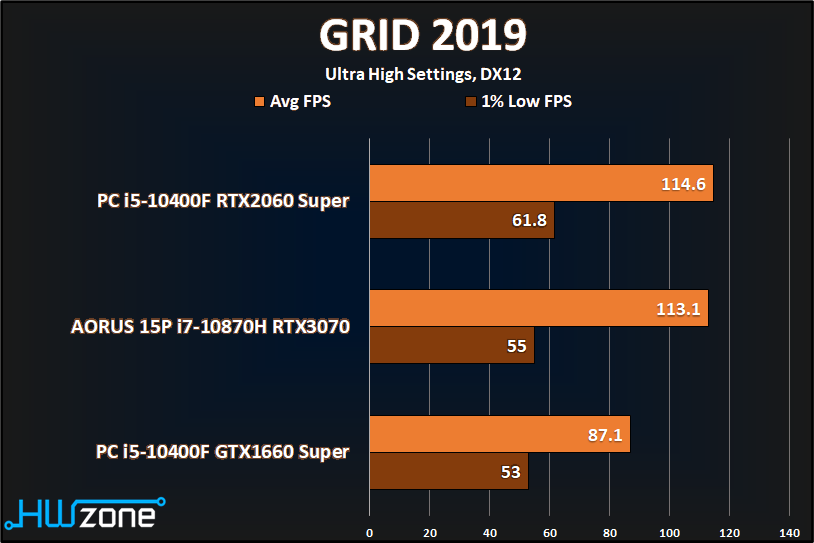 In the GRID 2019 game, the average performance difference is also very small compared to a desktop computer with an RTX 2060 SUPER. The difference in performance at minimum frames per second probably comes from the difference in the power of the processing cores between Core i5 10400F and Core The i7 10870H has slightly slower cores during total effort. 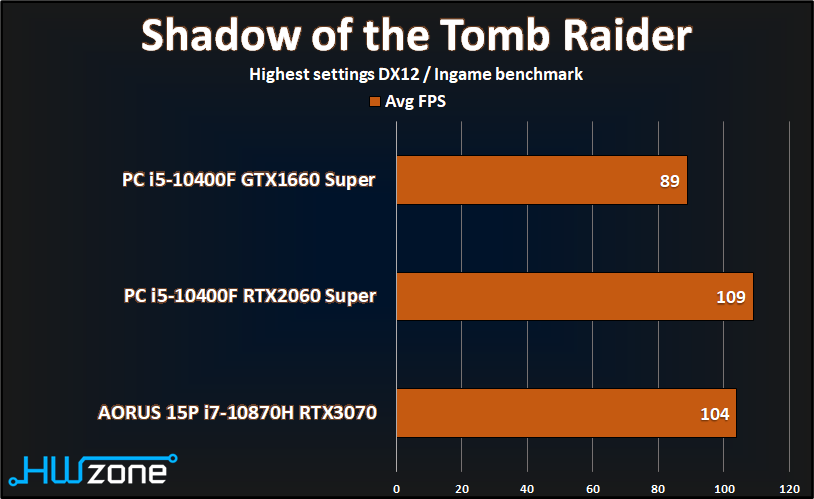 The game Shadow of The Tomb Raider also likes Processors Strong behind graphic cards Strong, and here we see transport of the desktop system across the 15P. Still, the difference is relatively small and when you think about the size and power differences between them, you can understand why מחשב נייד With serious performance suddenly looks relatively lukewarm in front of desktop monsters. Everything in perspective. 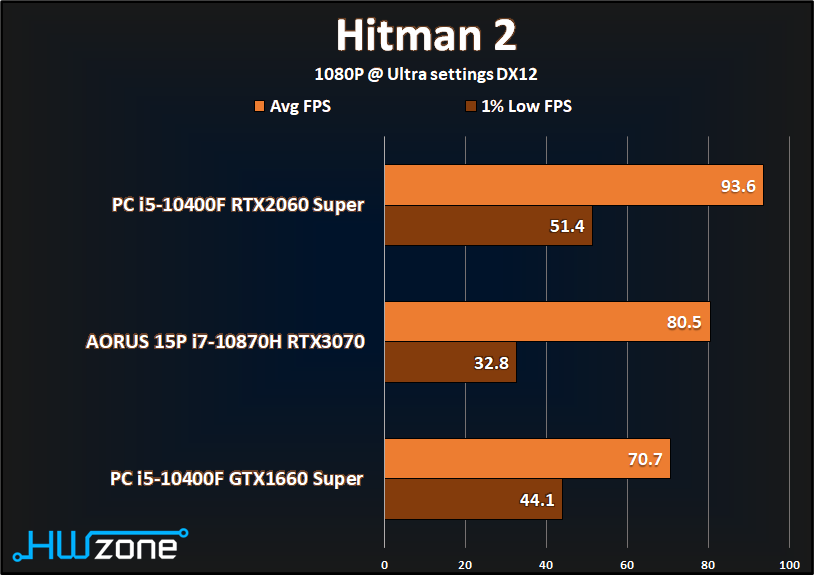 In Hitman 2 the laptop performance is between GTX 1660 SUPER and RTX 2060 SUPER. The minimum amount of frames is lower than both due to the lower operating frequency of the processor. In general, the performance is quite good and with a little ease in the graphics it will be able to run perfectly even at over 100 frames per second. 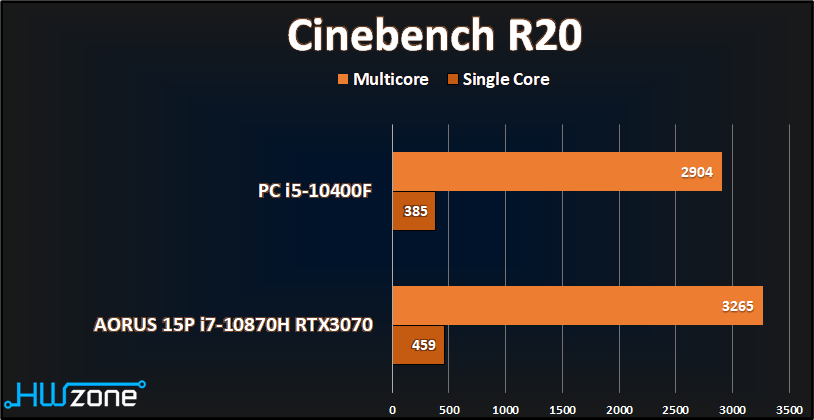 In the rendering test Cinebench R20 it can be seen that the 10870H does its job wonderfully especially when given the thermal space to do so, when no graphical effort is present.

The 99 Wh battery in the AORUS 15P in normal mode is battery A giant that can serve a laptop for long hours of work, but keep in mind that the hardware here is quite hungry. When the operating system is in Performance Mode, the 15P during intense office work survived 110 minutes (running PCMark 10 loops). In the state of energy saving for the last 15%, the battery life increases slightly to 125 minutes. Full charge speed from 0% to a full battery is quite reasonable and stands at 135 minutes.

In a test that is not synthetic, theAORUS 15P with Balanced mode a little over 220 minutes which is very respectable. In this mode, the screen is set to operate at 60Hz and 50% brightness. Office work needs no more than that at all. Five hours of office work with a serious gaming computer in office work is a joint effort of fair planning and a huge battery. God-AORUS 15P is very fond of plugging it in and giving its processors wings.

Heat emission when typing and using the keyboard 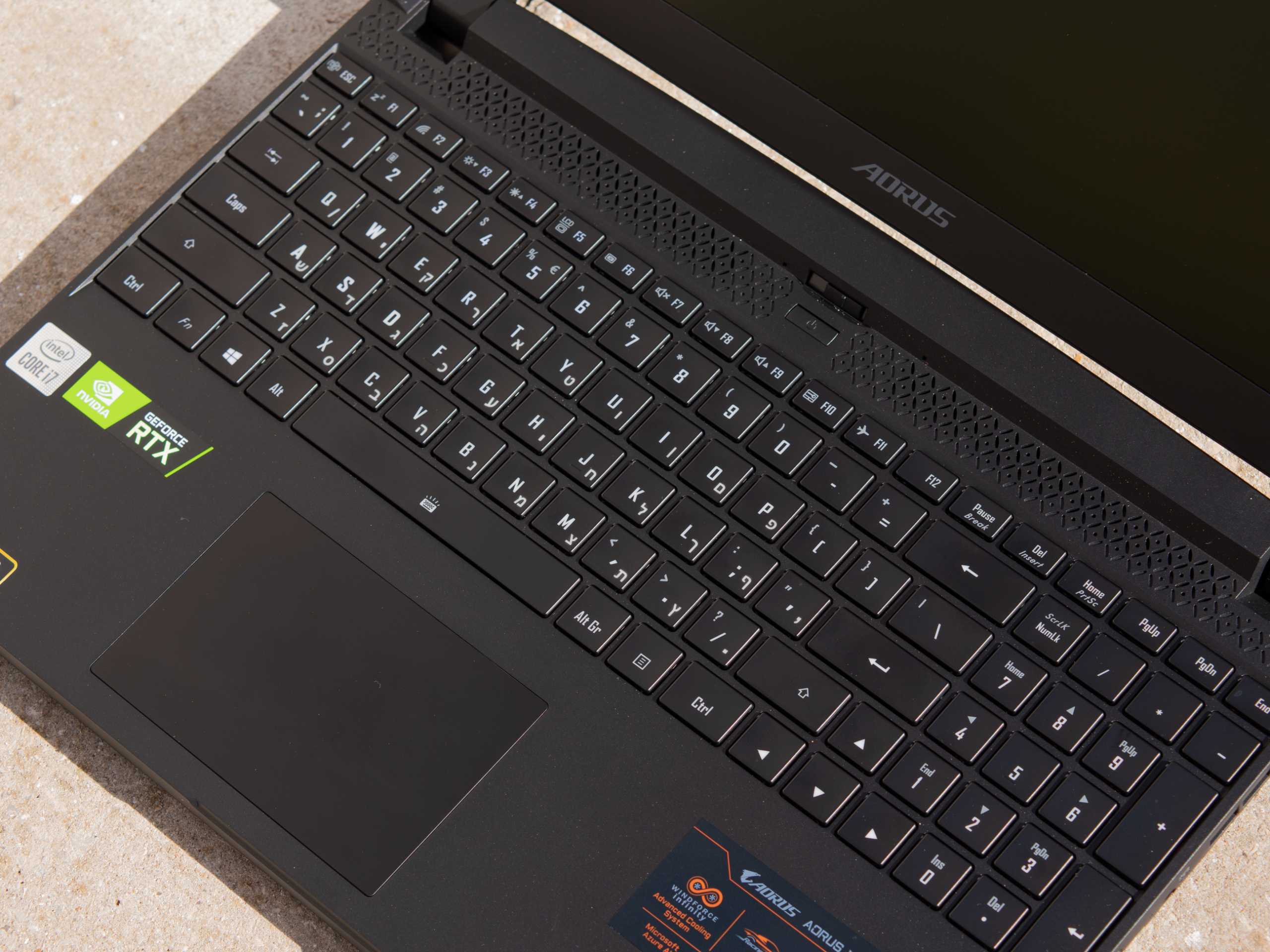 Above the keys is an air exhaust system that actually prevents hot areas and heat traps under the keyboard keys from forming. The typing experience itself is quite pleasant and no heat is emitted towards the user. This is possibly the most comfortable gaming computer I have ever used with membrane keys. Pressing in any area of ​​the key lowers it all fairly evenly and there is a noticeable click that allows for easy typing. Upgrading a map will only be for mechanical buttons.

In every generation of hardware launches we see how the world of graphics and processing gets an extra degree of computational power, and the AORUS 15P is no different. In the past the graphical power differences between what can be obtained on an advanced desktop computer and what can be obtained on a laptop have been abysmal. Since then, thanks to technologies that improve the performance output per power consumption and placement of technologies for the application and emission of increased power consumption in computers Mobile, We come to the launch where even under serious graphical effort the performance output we get will not embarrass advanced desktops.

God-Core The i7 10870H that GIGABYTE chose to use in this laptop is the same processor that it also chose in the generation before the launch of RTX 30. Although this is not a "previous generation" processor since the series Core In the tenth generation at least in high heat envelopes it is not technically a previous generation product, but there is certainly a sense of using a processor whose capabilities and behavior are slightly behind.

The feeling is not random, as we are a few weeks after the announcement of fresh laptops from AMD Based on the fantastic Zen 3 architecture that can be found in the Ryzen 5000 desktop processors. We are convinced that with an advanced laptop processor like the AORUS 15P will be able to fly even higher, although we also understand why GIGABYTE chose an octa-core processor of Intel The E-Comet Lake Existing.

Inventory availability is the key to sales success, and the ability to produce is more important than anything. GIGABYTE is familiar with the current market situation with AMD and the great shortage that exists in relation to the demand for Zen 3 processors and has chosen to launch its new AORUS 15P with an Intel processor that is significantly healthier available to it. The concern remained mostly to accept and assimilate the coveted graphic cores of NVIDIA And it seems thatGIGABYTE Meets the task.

Computers GIGABYTE The new ones and the AORUS 15P in particular are available for sale today along with the new video cards from the GeForce RTX 30 series. The user experience is very surprising from a manufacturer that we are usually used to seeing in video cards and motherboards. It is evident that GIGABYTE Does a lot to enhance the user experience on its laptops. God-AORUS 15P is easy to use, well built, easy to upgrade and maintain and contains quality components.

A price tag of ten thousand shekels is not easy to digest and contains an addition over an official price considering the challenges of availability and logistics, but the new AORUS 15P is a gaming computer with serious capabilities in a compact package. The 240Hz display is a nice bonus for e-sports players as games such as CS: GO or Valorant are an easy application for theRTX 3070 Max-P. Excellent cooling capabilities, good typing experience and minimalist exterior design and a taste that goes well with a combination of business and pleasure.