And now in the reference: Review AMD Radeon HD7970 3GB


It all started when we discovered the 2009 technology in mid-DirectX11 Through promos and various examples throughout the server. The computer players sprang from their chairs excitedly for what awaited them.

At the end of 2009 it did happen and-AMD Has launched the world's first generation of graphics cards,DirectX11 All its features, series Radeon HD5000. Series this It was also the first series to be produced entirely in 40 nanometer lithographs, which means that we found not only support for new technologies but more processing power. Since then, she has managed to come out with another series called Radeon HD6000 Which also used 40-nanometer lithography but also provided higher performance. Opposite toAMD position NVIDIA Which caught it short in every corner with equally good processing strengths and a large selection of products for all markets.

The peak of the competition between Series Radeon HD6000 And Geforce GTX500 We have not even gone through the shadow of launching a series Radeon HD7000 The new products continue to be cheaper and more expensive to fight on the customer's heart, but the new products are still significantly expensive and sometimes not worthwhile. 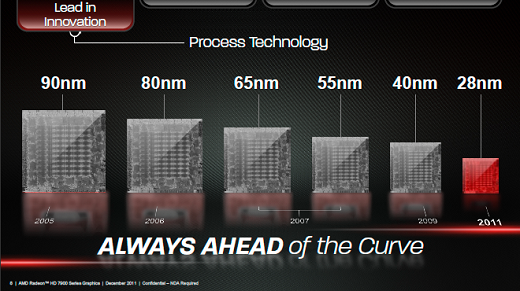 AMD Known as a manufacturer that does not give up pioneering in the fields of its graphics card technologies. She introduced graphic cards First supported byDirectX11, The first in the production of 55 and 40 nanometers and the first in energy saving technologies.

Being a technological pioneer is good and bad. Well, because you bring something that did not exist to the market. Bad, because you give your competitor an opportunity to learn lessons before he launches his product. AMD Has promised 28 2011 video cards already in XNUMX and seems to have been able to keep its promise, albeit with great difficulty. Tahiti Is the code name it gave AMD To the series of cores that it uses family cards Radeon HD7900 Which currently includes the HD7970. The core of theTahiti As found inHD7970 Contains 2048 Processors Which operate at a frequency of 925 MHz.

The volume of memory it provides HD7970 Is no less than the 3 gigabyte type GDDR5 Which runs at 1375 MHz speed. Increasing the memory volume in 50 percent is a nice addition though AMD Did not stop there and chose to use a controller that provides bandwidth of 384 bit, a vital component of the amount of memory traffic. Many of you will raise an eyebrow in view of the work that a 3 gigabyte video card carries memory But it's important not to forget that this video card is manufactured to deal with the graphing loads we will already receive in the array Eyefinity It has three or more screens and very high resolutions that are not on a single screen.