Anti-Aliasing - The quick guide to smoothing jagged edges in games

Many times find themselves Gamers Encounter with the anti-aliasing option (or short for AA) in games and not so much about what to choose - the names are confusing, the effects are different and so is the impact on performance. We are here to arrange for you on the different types of advanced filter so you can choose wisely the effect that suits you best

Before we get started, it's important to note and remember that not all AA types exist in every game - the types you can choose vary depending on the graphic engine and the choice of the programmers.

The existing AA types and their impact on performance

The type that applies to the image during processing is the most difficult on computer resources because it processes the scene at a higher resolution and shrinks it to the standard resolution dimensions.

This type is called MSAA or Multi-Sampling Anti-Aliasing. He has a brother who performs a similar action called SSAA or Super-Sampling Anti-Aliasing (his former name was FSAA). Although, SSAA is known to reduce image quality and make it look picturesque or oiled because of the way it works with a slide that not only eliminates jagged edges but also corners. SSAA is not commonly used at all, but only in MSAA.

MSAA works cleanly by sliding the jagged edges of objects and trying to avoid other elements within objects. This may result in a little bit of memorization within the objects, but usually the quality of the image improves dramatically. There is a product for the filter, which is expressed in games through MSAA X2 or MSAA X4. The product symbolizes the amount of internal processing performed. The product of X2 processes the internal resolution of the 2 jagged edges and 4 4 processor, resulting in a smoother image. It is important to remember that the difference between X2 and X4 will not always be large or noticeable, but the damage to performance is quite high. 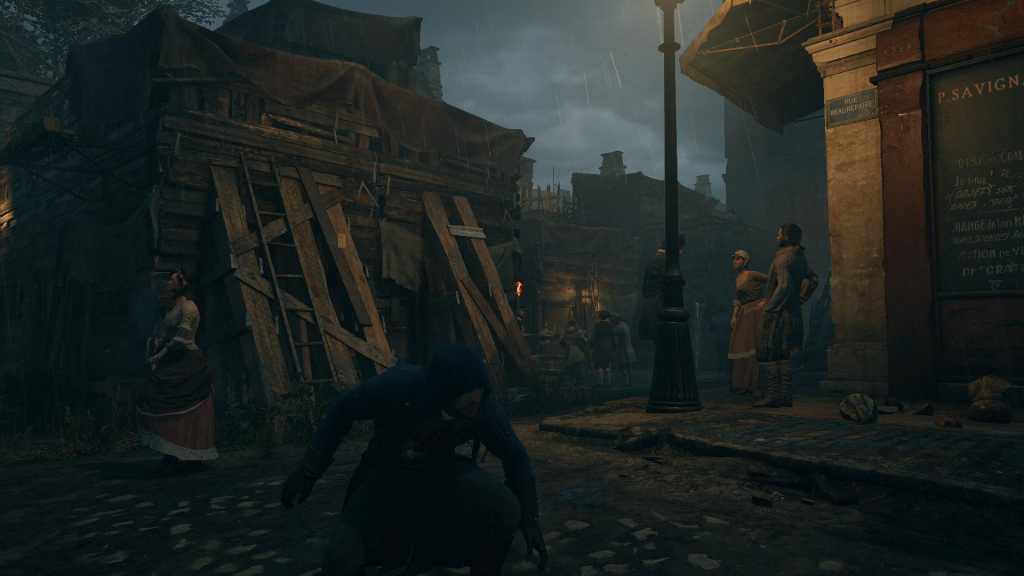 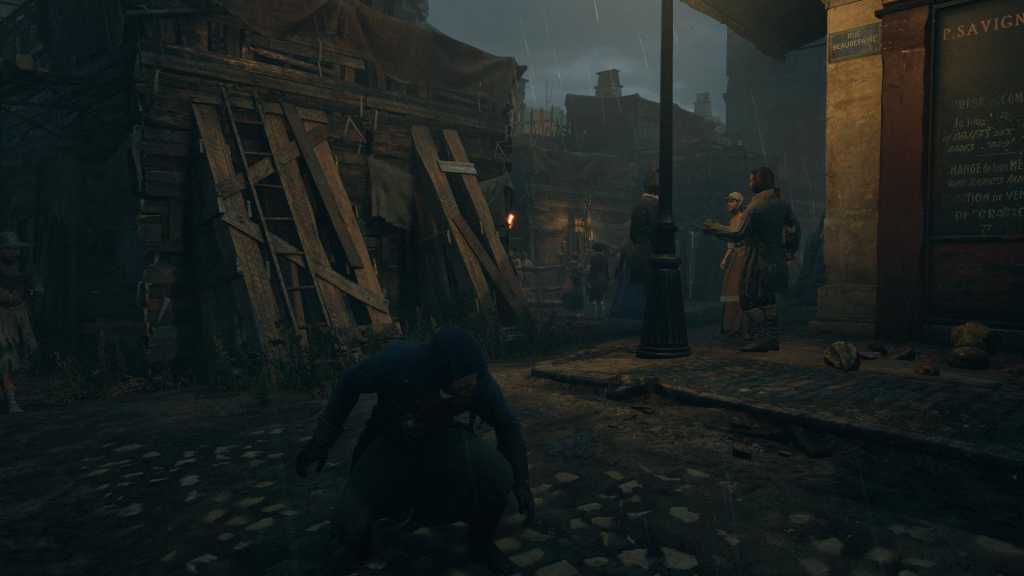 Pay attention to the lighting pole and wall of the building. The jagged edges that were examined without the addition of the filter were softened and made more delicate.

When they belong slightly to the past, these filters can still be found (CSAA in Anuidia and EQAA in AMD) that have the same mode of operation. Their role is to identify the existence of objects of this kind and to decide whether to perform the smoothing of edges. Visually, these effects are similar to MSAA but do not apply in any case, only selective. Due to the lack of uniformity in image quality, what used to be a little used today is already quite rare in games.

Filters after the image are filters that apply to a processed image only after it has been fact and it makes its way from the video card to the computer screen. Because of this, the effect of this filter is on Performence Is significantly lower than the effect of the MSAA filter.

The first popular filter in the category is the FXAA. The role of the FXAA is to move a 'smooth' image smoothing into a fact that is soft and soft to make sharp and fine edges except for more soft and pleasing to the eye. Here you can find an example of an FXAA filter starting on an image: 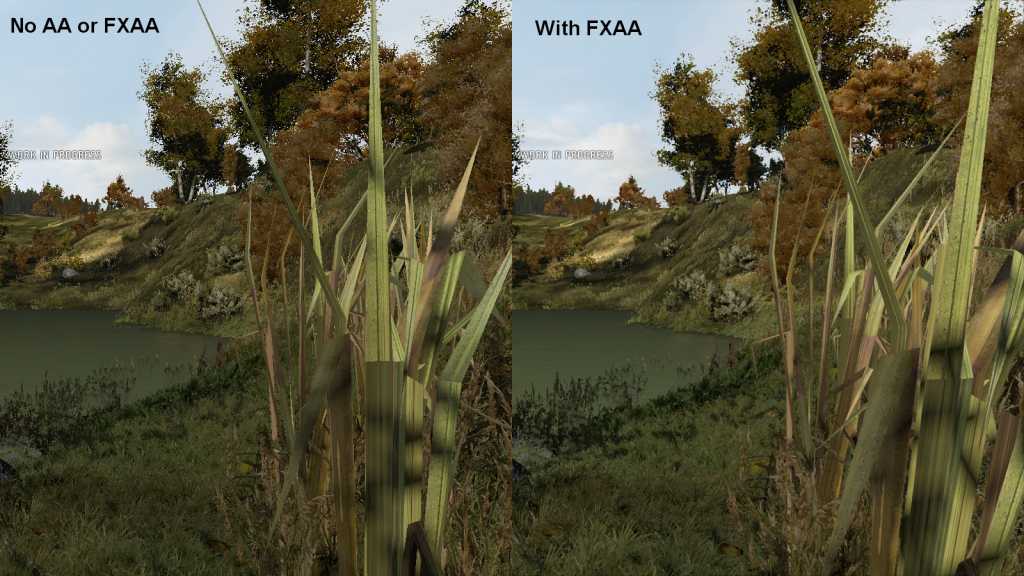 Note that jagged edges are still much jagged but much softer. These are not just the smooth edges but the whole picture and here comes the lack of the FXAA filter. While it handles the jagged edges lightly, it may obscure objects that are not necessarily blurring. Thus, there is very little performance degradation against an image quality that can be problematic (depending, of course, on the scene and the game). 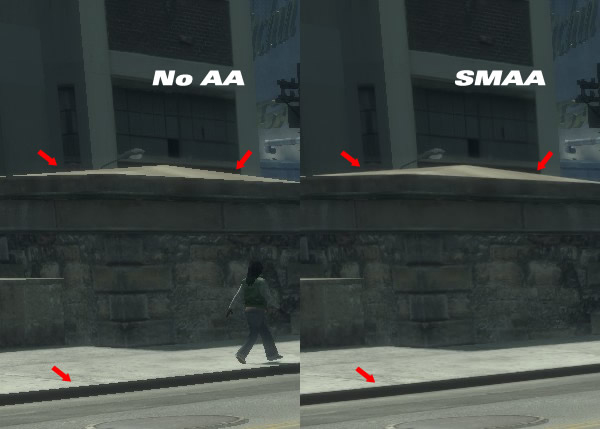 This technology combines elements from FXAA and MSAA by not only processing higher-resolution pixels for smoothing, but also using color tones and depth calculations to smooth edges. This method is not considered common but there are many tools that help users apply it externally to games. This is a filter that is more specifically designed for those who love image qualities, who do not like the weight of MSAA.

TXAA is a new filter designed for video card Anodia GTX 600 and above only. This filter provides a visual effect similar to FXAA but does not adversely affect the image quality of non-AA objects. However, this filter remains heavy than FXAA.

MLAA of AMD She Technology Quite similar, and it is carried out after a fact scene. The principle is similar, the processing of few elements of sharpness where sharpness is desirable for smooth jagged edges. Demo Here:

While these methods are not heavy on video card resources, their price is image quality. MSAA explained in the beginning is still the preferred option for image quality enthusiasts and is undisputed.

MFAA - New and unique to Maxwell

MFAA Is an AA method which was recently developed by Anodia And it is possible to use the graphics cards that carry only Maxwell cores (such as GTX 970 and GTX 980).
MFAA is a method for calculating the edge of an object and its background, but by using an efficient code from the image hierarchy with the same calculation that includes less gradient color change.
While MFA technology does not allow high image quality like MSAA, performance degradation is significantly lower.

Recently Anodia launched Technology called DSR Which allows GTX 600 or higher graphics card users to create resolutions that are higher than their screen resolutions, thus shrinking the render dimensions back to the screen size and earning image quality. Also users AMD Can use some tools to get a similar effect. 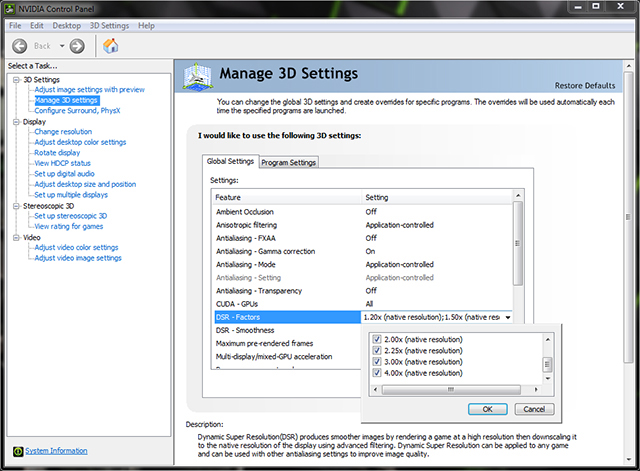 What actually happens in such a situation is very similar to what the MSAA filter does. There is higher pixel processing relative to the screen resolution, so shrinking the resolution helps smooth out jagged edges. An example of using DSR would be rendering 2560 × 1440 resolution on the 1920 × 1080 screen.

The addition of 70% in the resolution means an almost double filter of the sample (MSAA 1.7 if you wish). Thus, the performance degradation is not as high as applying the MSAA X4 filter and image quality is acceptable.

Here are the AA types that are common today by quality and weight:

One of the phenomena that happens today and actually existed quite a few recent years is users who open discussion in the forum about how disappointed they are with their new and advanced video card. These users will in many cases be those for whom the highest definitions are literally so. They access the graphical settings in the games and pick up every option and every slider you see to the maximum. Unfortunately it also includes a MSAA filter in a multiple of 8. It is very important to remember that the filters should be used judiciously and according to the quality of the image, and should not be used without consideration at all Performence Very high. Today there is no video card that prevents the maximum filtration levels in new games.

The best way to run filters is to look at the quality of the picture and the scene before you. Also, even for different screens the discretion will be different. On large screens with low pixel density, the priority for AA will be higher than on small, high-resolution screens. Play between filters, see how the image changes and stay moderate. Sometimes the differences between one product and another in the filter are simply not worth a huge loss of Performence.

Want to discuss the manual or anti aliasing technology in general? You are welcome to enter Offline video cards our.