By
This year at Computex Asus The main emphasis is on the high market, with many advanced motherboards from series ROG and-TUF And some surprises
When its competitors want to place an emphasis on the home and office market Asus This year the foot on the gas pedal in relation to end users and motherboards.
We were greeted by a showcase of motherboards from a series ROG (MT Republic of Gamers). Seems like a generation Z97 Asus Expands the product line, and presents more panels than previous generations. If so far we have known two or three boards ROG Dor, this time launching Asus Not less than five.

It also appears that it intends to launch products ROG Further, they will also be based on the chipset Z97. The most advanced in the series is theMaximus VII Formula. Below it is the X-MITX The dwarf VII Impact, And other low-cost versions such as theGene, God-Cleaning and the-Hero. The new addition to the series is theCleaning Which is priced quite aggressively - only $ 150 at launch. This is to give the prestigious color scheme and branding even to those who can not always afford. Here demonstrates Asus The use of water cooling for the heat sink designed for voltage stabilizers in the motherboards. There is also love forAMD Asus. Here is a computer system based on theAPU The new AMD, God-FM2 + With processor owner Core Built-in graphics are particularly powerful. Motherboard is theCrossblade Ranger, Product ROG Designed for the platform. Rapid interaction is an important issue for Assass. The company devoted a wall to display products LGA1150 New ones with interfaces SATA Express To the means storage and-Thunderbolt For any media that needs very fast traffic.
graphic cards
In honor of Computex, the company launched a new line of graphic cards on behalf of STRIX. Models in this series are equipped with advanced cooling and volume זיכרון Double graphic compared to that found in standard products. So, atRadeon R9 280X AndGeForce GTX 780 sample STRIX 6 is found in gigabytes and not 3. There is a series of popular products in the market for the graphics cards that come from the horse and this series ARES. WhenAMD With a dual-core video card, Asus will come out with its own special model that carries advanced frequencies of operation, a printed circuit board designed in contrast and of course also Cooling advanced. So she did with ARES When launched Radeon HD5970So she did with ARES II When launched Radeon HD 6990 And so she did this time with ARES III Which provides a replacement for the most powerful video card AMD, God-Radeon R9 295X2 Based on two Hawaiian graphics cores. God-ARES III Comes after an evolution of cooling when it is all covered with a block Cooling Made of copper. Here you will not find fans and pipes, this video card needs a serious radiator, pipes and pump. Asus Apparently she understood that the target audience was not playing games (or actually?).
Modding sponsored TUF
Motherboards series TUF (MT The Ultimate Force) Of Asus Is such that it is built to survive harsh air conditions and effort over time. This is also the only motherboards series that takes responsibility for five years, compared to three in all the rest. With TUF She allowed herself Asus Play with designs. Due to its goals and the structure of the boards, it appears that the military approach to the matter will be accepted more than any standard color scheme for gamers.
Meet Sabranco, A series of snowy motherboards with a white color scheme. This is the first experiment of Assus with this color scheme and also a fairly successful one. It is important to remember that the preparation of white motherboards is not a simple thing, since after dyeing enters Motherboard The oven has a chemical process in which the paint needs to maintain the desired shade. Motherboard It comes after a great demand for white products. After opening the exhibition has released Asus On Twitter the tablets and said that if 500 gets re-tweets of the advertising, it will consider bringing more such products. Of course, more than a few days have passed and they are already close to 2000.
Such white motherboards open the door to new projects and colors on the PC. So, we got the next project. 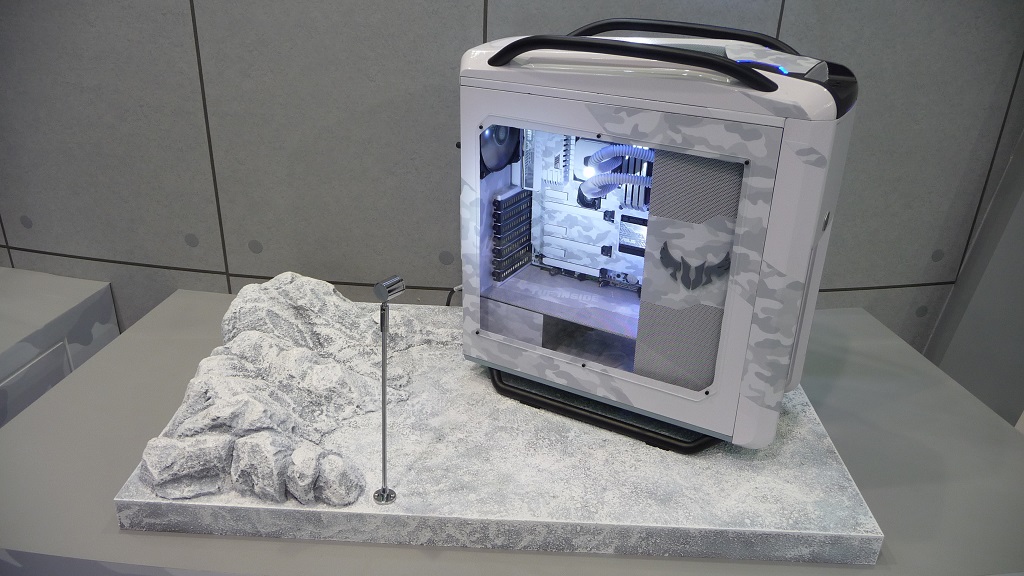 Here demonstrates Asus The use of the computer is almost completely white with the motherboard Sabranco. In our opinion, this is one of the brightest and most elegant designs to date. there's more Modding in Asus, Also in the mainstream series. Thus ASUS also introduces the concept of execution Modding With a color scheme of black and gold as there are other products on the market that match these colors. Another project presented to us was the Maximini, an advanced gaming computer in a small car configuration. Cute, is not it?

No doubt this year Asus She went on a display that impressed visitors at the exhibition. The motherboards from the series ROG We expect to see this month for sale in Israel. The "TUF The new one is expected to arrive later.