Meet one of the most prominent motherboards in the AM4 chassis AMD, The ROG X470-F's Asus, Which offers all good to all those who are willing to invest

Summer 2018 is a great time to upgrade hardware to those still stuck with the distant past processors who simply can not adequately address many uses. We brought you a product review that is desirable and accessible to those who want to build an advanced computer system, preferably with a processor that has 6 or 8 cores from AMD On the basis of Motherboard Has an advanced chipset.

Asus motherboard manufacturer sent us a review of one of the most prominent representatives of the review is the X470-F series STRIX ROG. As you can tell from its name, this motherboard is based on X470's new chipset AMD And was created to provide improved support for the Ryzen 2000 series of processors AMD. This series includes Processors "Simple" with 4 cores up to 8 powerful core processors such as RYZEN 7 2700X.

This chipset was born to replace the previous X370. It brings support features such as SLI or CrossFireX to a combination of several graphic cards In an integrated array. In addition, these motherboards usually have a larger range of connections to various expansion and storage devices.

Without exception, a basic requirement of AMD Motherboard manufacturers are X470-based extensions that are suitable for execution Overclock Her labors. As a result, these motherboards naturally include advanced power supply systems to the processor, because the process requires increased input voltage and consequently increased heat emission and power consumption accordingly.

This chipset is considered to be the most advanced AM4 processor for processors today AMD. Below it is the B350 chipset which will soon be replaced by an upgraded one as well (our reviews are already in the oven). The memory supported by the entire socket is of a type DDR4 And is limited to 16GB sticks per slot on the motherboard. The maximum supported memory speed depends on the motherboard.

A closer look at the motherboard

This motherboard is in a standard ATX configuration and will therefore fit any chassis that supports this or a larger configuration.

I have to admit that I really like the aesthetic direction she chose Asus With this product, and I sincerely hope you will continue with this design line in the future. The design is fairly clean (at least considering what we have seen from the motherboards market so far) and mostly matte black.

The array of PCI-Express interfaces is generous and varied enough for my taste. The two interfaces intended for populating graphic cards Heavy weights contain an external reinforcement attached to the motherboard and made of steel. This is one of the positive changes in modern motherboard designs. The lower interface is the older 2.0 standard and the X4 speed. It's an interface that fits products like expansion cards toUSB, Sound cards and a variety of multimedia products. 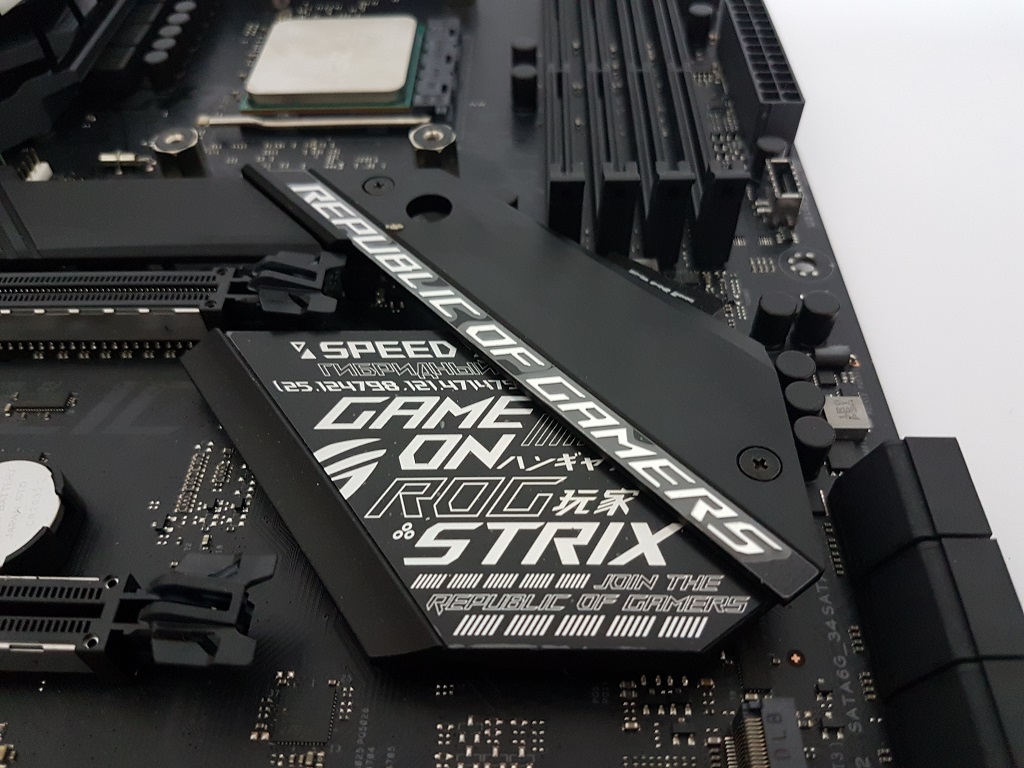 Here you can see the heat sink of the X470 chipset. This body along with other bodies installed on the motherboard is entirely made of aluminum casting. I am very fond of the theme of white text on a black background. It is important to note that the text changes slightly with a change in the viewing angle, which is known as Foil in the graphics world. There are no LEDs or bulbs of any kind in this heat sink. 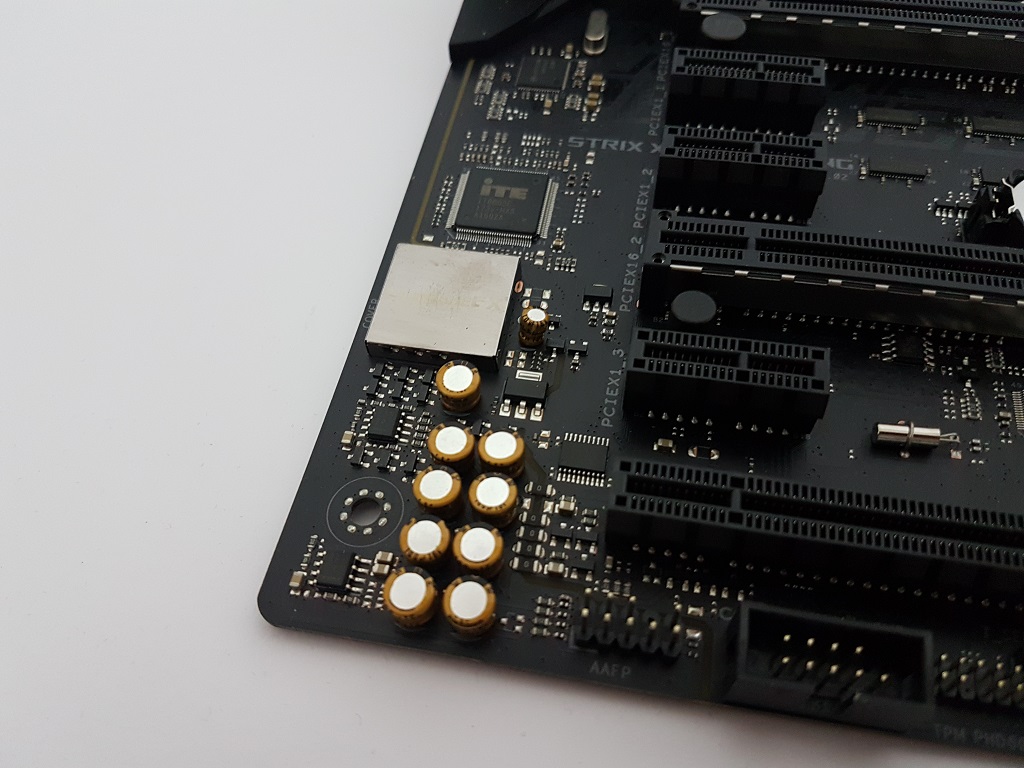 A quality sound card is something that is always appreciated. The one on the X470-F is the Realtek ALC S1220A that is considered to be the most advanced sound card you'll find on your motherboards today. This area is electrically separated from many nearby areas to reduce noise and includes high-quality capacitors resulting in Japan to receive the signal which also receives reasonable amplification. You can mark this category.

In hindsight, there is an excellent balance. There are 7 standard 3.1 USB ports to one side in the modern Type-C configuration for those of you who have the latest phones and headsets for the same devices. The network controller is standard Intel The I211-AT is suitable for speeds of up to 1Gb per second. There are also display ports of type DisplayPort And HDMI to those who want to use this motherboard with processors RYZEN Which include built-in graphics cores such as 2400G. 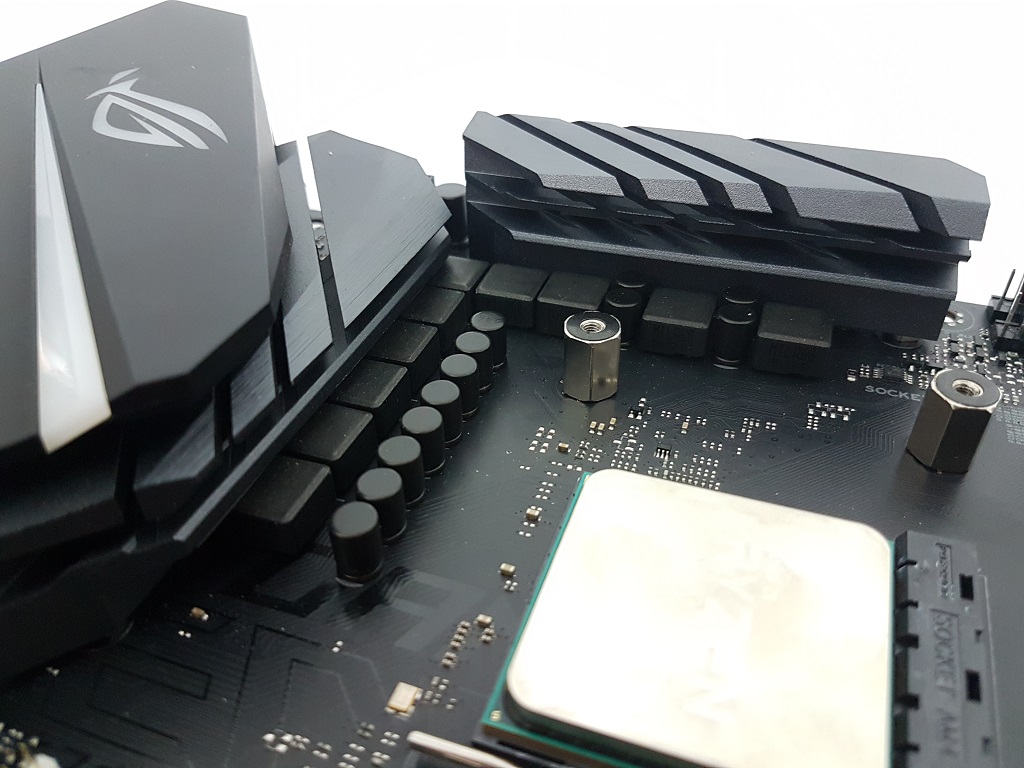 This is the processor power supply system on the motherboard. Its function is to obtain electricity from the 8PIN connection, to stabilize it and to supply it securely to the processor cradle. This is one of the most important systems on motherboards that are advanced today as they dictate overclocking capabilities and maintain my life span Processors And the motherboards themselves. Asus Chose to decorate the system with a plastic cover that includes bulbs RGB Controlled. Demo below. 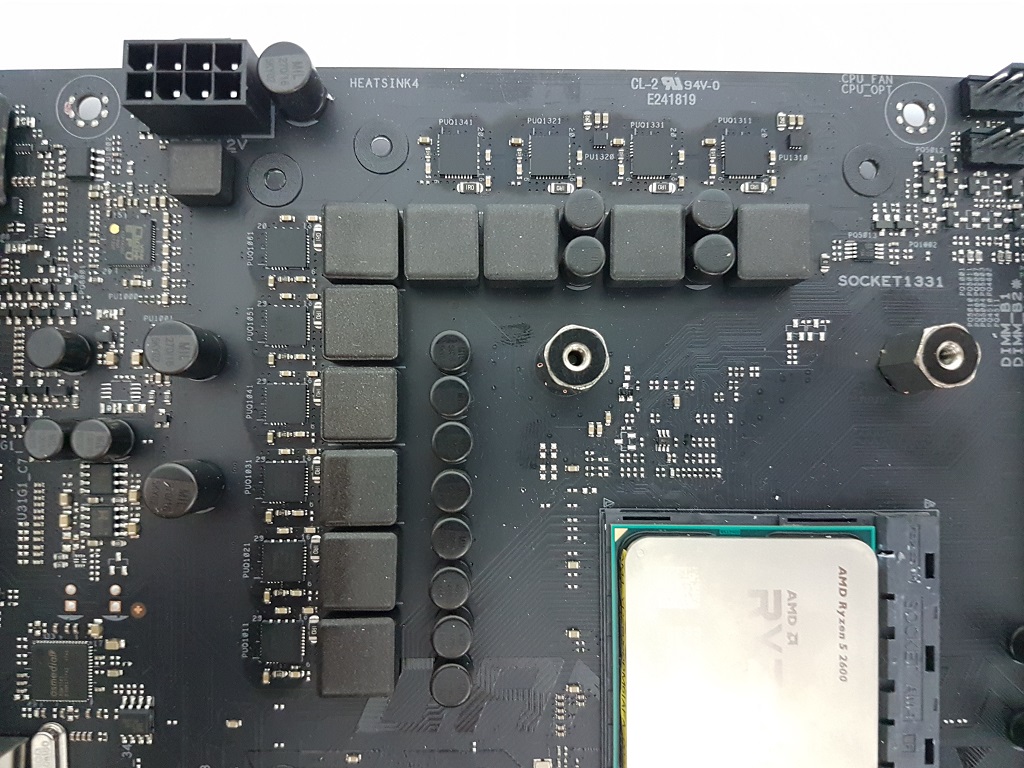 This is how it looks after removing the coolers over the stabilizers. This is one of Asus' favorite power supply systems. I know that such a system exists in a huge quantity in a very large variety of motherboards for its performance market. Both at Intel and at Intel AMD. 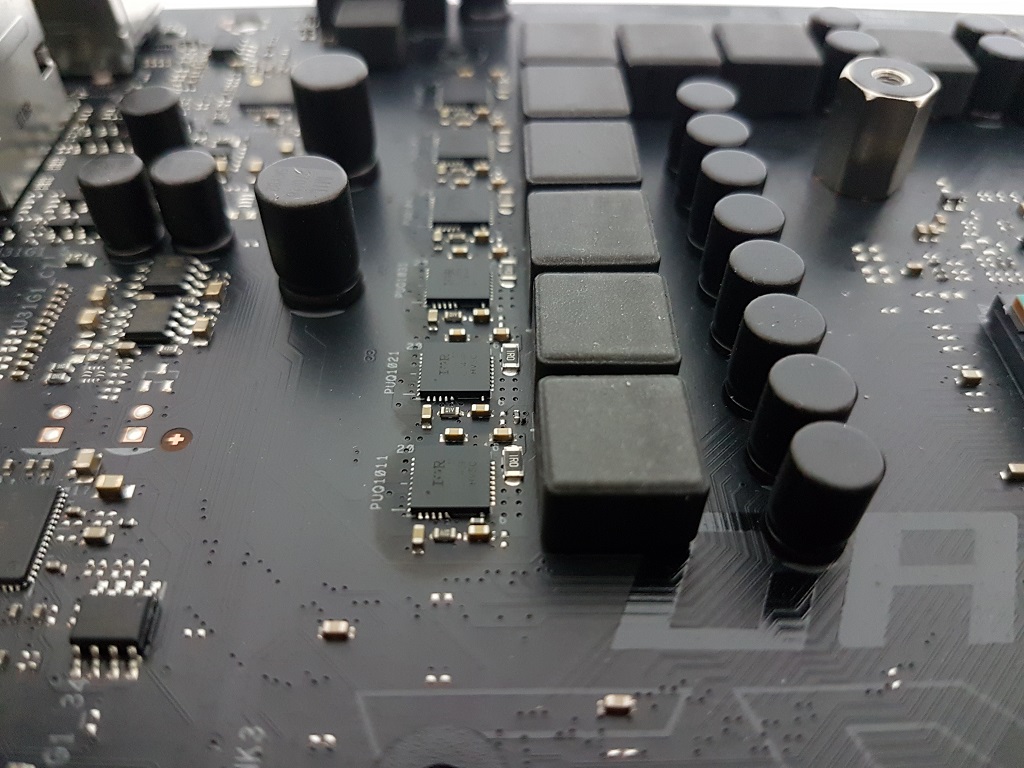 The system is based on 10 stages, where 6 for CPU cores (known as VCORE) and 4 are designed for the voltage of the processor and graphics core controllers if known (VSOC). There are currently no power controllers controlling motherboard supply systems that recognize a step-by-step 10 system, at least not commercially available. The VSOC voltage is used Asus In two frequency splitters to the incoming voltage, two phases are actually created in a split frequency of electrical input. This is possible and acceptable when the nominal frequency is high enough to compress and maintain clean electricity.

The voltage stabilizers themselves are IR3553 and rated to a maximum power of 40 amperes in voltage Core standard. They are perfectly affordable and stand in the middle of the spectrum of today's voltage stabilizers in the motherboard world. The more advanced ones have 50 amperes and even 60 amperes. I'm a little surprised that the SOC system for the processor has been strengthened, and that makes me a bit hilarious, because even if it were only two stages, it was over and over.

Because everyone loves grades on the Internet, if I had to rank the power supply system on the X470-F, I would rate it for the CPU core on 8 from 10, and the CPU controller and the built-in graphics core (if any) in 10 from 10. Definitely can be overclocked under any body Cooling Air or water as you wish as long as there is ventilation in the processor environment. The cooling system to visit the CPU generates Motherboard Perfect for the extreme speed of the graphics core built into processors that contain it. Typical, in a processor like 2400G this system needs about 25 watts in effort, the system in this motherboard has no problem to deal well with Watts 125. 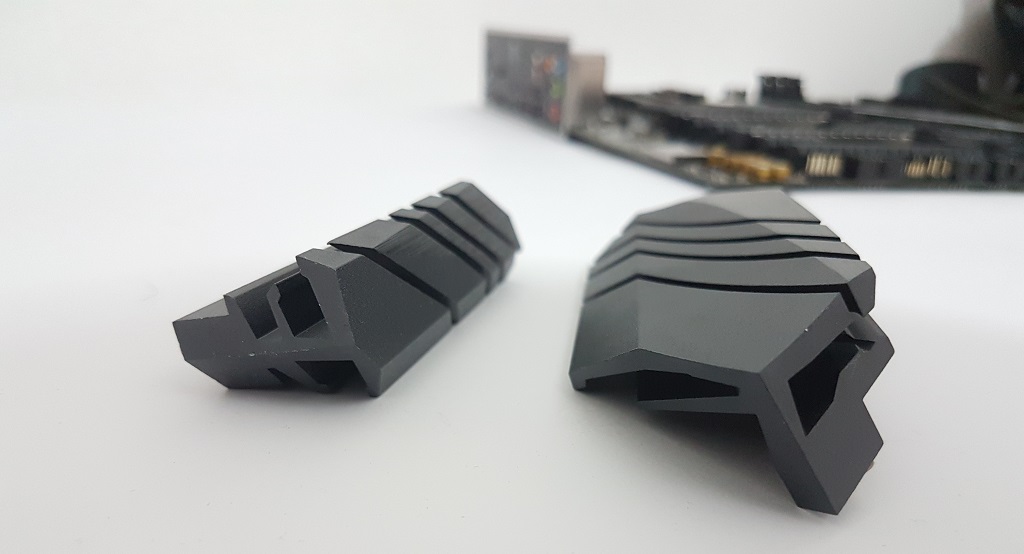 These are the cooling elements for the stabilizers. Here we come to a part where I have little criticism for improvement. I understand the need for modern design and I have no doubt that these things are successful in presenting modern design. They are well polished and cast from a very respectable amount of aluminum. Although the surface area presented by the Hello bodies is very medium and it seems that the appearance is pre-ability Cooling Priority engineers. I would be happy to see improvements in the future that my body is displaying Cooling Have a larger surface area. It is important to ensure proper airflow in the processor area in the chassis - if there is one, then there are no real worries.

Experience the use of the motherboard 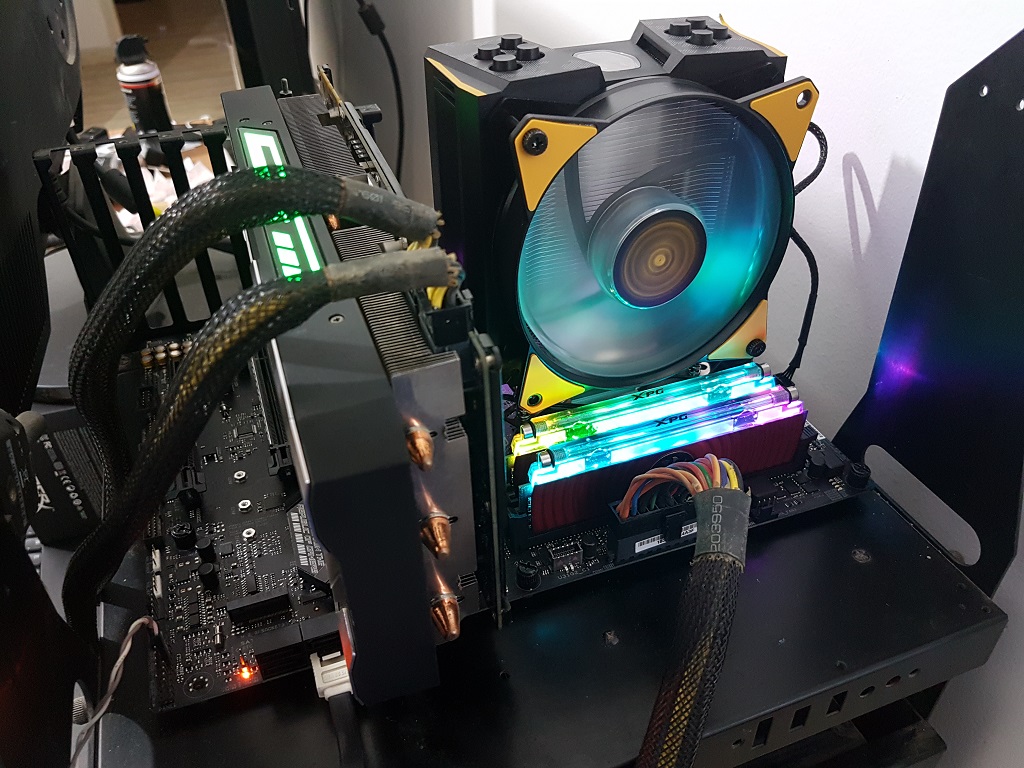 As the first motherboard to go through our testing system - I must admit that the experience is excellent overall, but there are a few things I hope Asus will take to their attention in order to improve where it is left for the following products.

First of all, this is a motherboard for gamers with inclinations and winks in the world of overclocking as well - for me this means that it is very worthwhile to implement features that are important for various overclocking operations. Their sons, buttons concentrated in one place on the motherboard itself for switching on and off and resetting the BIOS in the event of a malfunction. This is for me the A-B of an overclocking board. In addition to this, points for reading CPU voltages and memory using a multimeter are an important bonus.

Another thing I would love to see is my body Cooling Slightly more improved power supply system. The processor with which I tested the system has a moderate power consumption and handling it without overclocking was good. However, after I put the Ryzen 5 2600 into a constant frequency of 4.1Ghz and voltage Core For 1.35V, voltage stabilizers have an operating temperature of about 85 ° C. Of course ventilation easily addresses this problem, placing a fan on the cooling elements reduces the operating temperature to about 60 degrees Celsius. Air circulation in the case is important.

Support for frequencies זיכרון Our Ryzen processor is one of the most powerful points of the X470-F. This motherboard does not come to play games when it comes to frequencies זיכרון The processor. The memory I have chosen to use for this system is not included in the official support list, but its hardware is known to have high general support for the Ryzen processors. Note that the system was completely stable up to the frequency זיכרון Of 3400Mhz (!), A perfectly impressive frequency. I'm sure there are kits זיכרון And processors that can bring the frequency of memory operation even to 3600Mhz, which is considered very respectable for my processors RYZEN.

In terms of aesthetics I have exactly 0 claims or criticism. I really like the X470-F look and I think Assus did a great job on design Motherboard Which fits most of the advanced hardware available in the market with integration RGB Nice and impressive in the processor area. There are no exaggerated visual qualities here and everything is done in good taste.

Overclocking to the CPU has been a great experience as well, and I'm glad how simple it has become the average user who wants to bring his Ryzen processor to a high frequency. All I needed to reach the 4.1Ghz frequency for Ryzen 5 2600 was mainly to lift the core voltage and multiply the base frequency. Power supply systems took care of the rest with stable and logical values. I'm glad that so fast there already exists a platform that can deliver Overclocking Safe and high quality for my employees RYZEN Fresh.

The price of the X470-F STRIX is reasonable and stands at approximately NIS 925. This is an acceptable price considering the features and visual characteristics of this motherboard. It comes warmly to HWzone's recommended list as a happy and good product to use with processors RYZEN. Excellent memory support, good overclocking capabilities and impressive aesthetics.