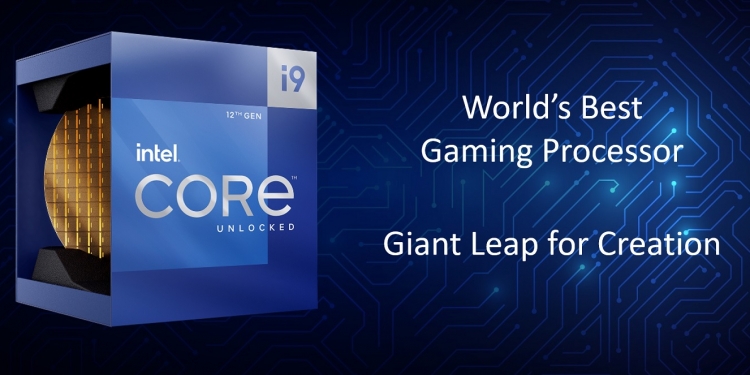 Today officially delivery Intel The screen above for more details about its upcoming processor platform, which stands out as the best news in a long time from the chip giant. Processors Core The 12th generation comes with a promise and expectation of serious performance thanks to architecture Outstanding in assembly compared to anything we've seen from Intel so far.

The story of Alder Lake goes back a few years and lies mostly in the creative work of teams Intel The Israelis. The goal was to create the next step of architecture Flexible, capable and efficient for any platform on which it will be implemented.

According to Intel, The development time took over three years for this architecture, and underwent a variety of improvements and changes over the years until it reached a point where the team became satisfied and the product became ready for launch. From there, start a factory Intel In Kiryat Gat to produce what will probably become a product with impressive popularity. 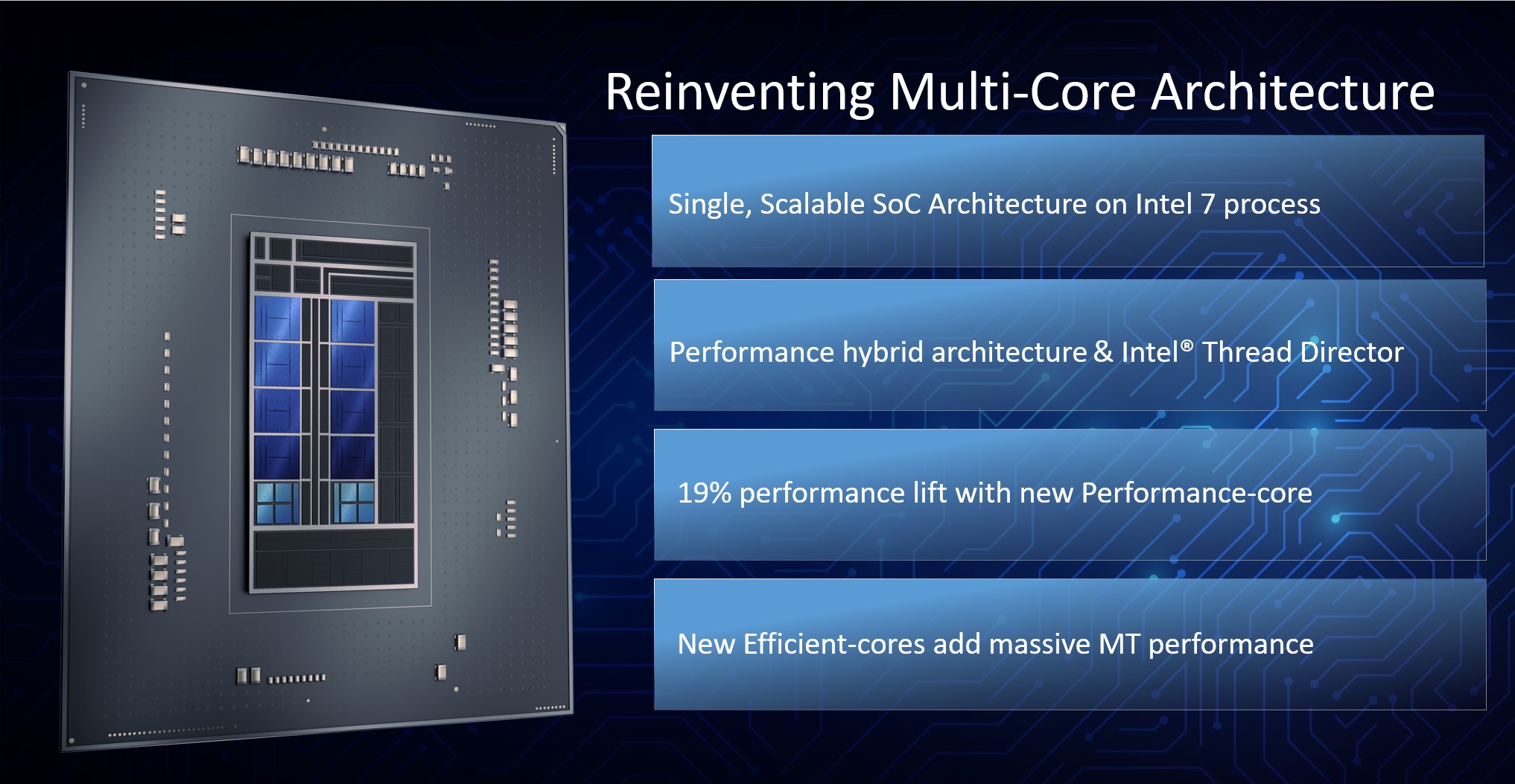 Challenging Alder lake They are as follows: 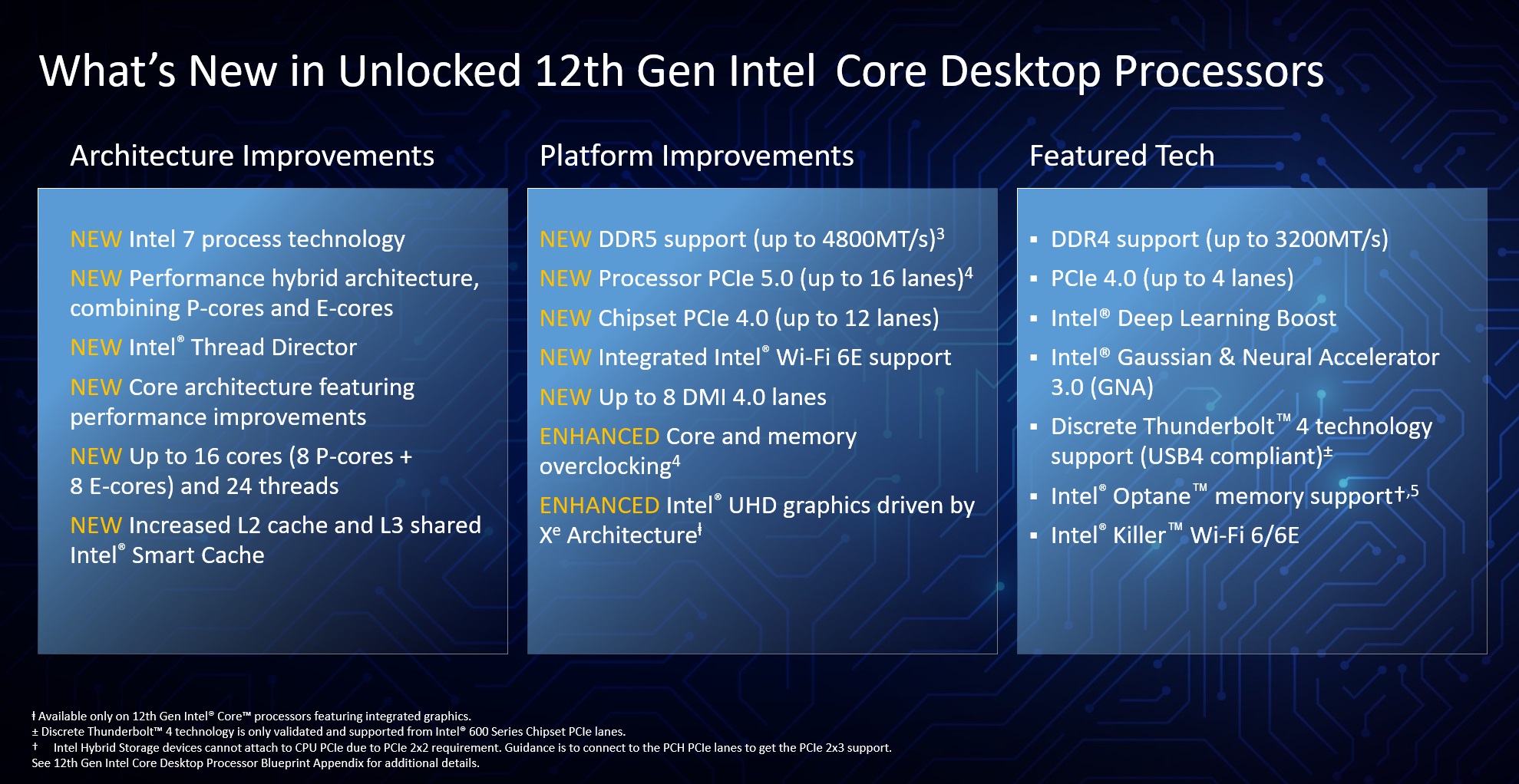 Here is a list of new features that you may encounter on the 12th generation processor platforms Intel. The manufacturing process of these processors is called Intel 7 and this is actually what we have known so far as a 10nm process. This is an advanced process, which many claim is parallel to what TSMC produces today Processors At 7 nanometers.

As mentioned earlier, Alder Lake processors are going to make hybrid use that includes performance cores and efficient cores (Performance Core, Efficiency Core), or as P-Core And E-Core. System processes are managed using a hardware layer that is part of the architecture. This layer is called Thread Director.

Also, at the level of communication channels and interfaces, the Alder Lake platform which will come with new motherboards based on the Z690 chipset will contain a host of standard updates. Video cards will receive the fresh PCI-Express 5.0 standard, which makes a debut on PCs. Video cards that support this standard are not yet available. Alder Lake processors support a new system memory that is DDR5, but it is important to know that there will be motherboards that come with support forDDR4. Thus, users who own memory DDR4 And not interested in buying a new memory, will be able to purchase Motherboard Which supports their memory.

We do not want to devote too much of a share to the performance that Intel is claiming at this point, simply for the reason that in-depth performance tests from us and other entities around the world will arrive in exactly one week. Yes we would like to share some of them. 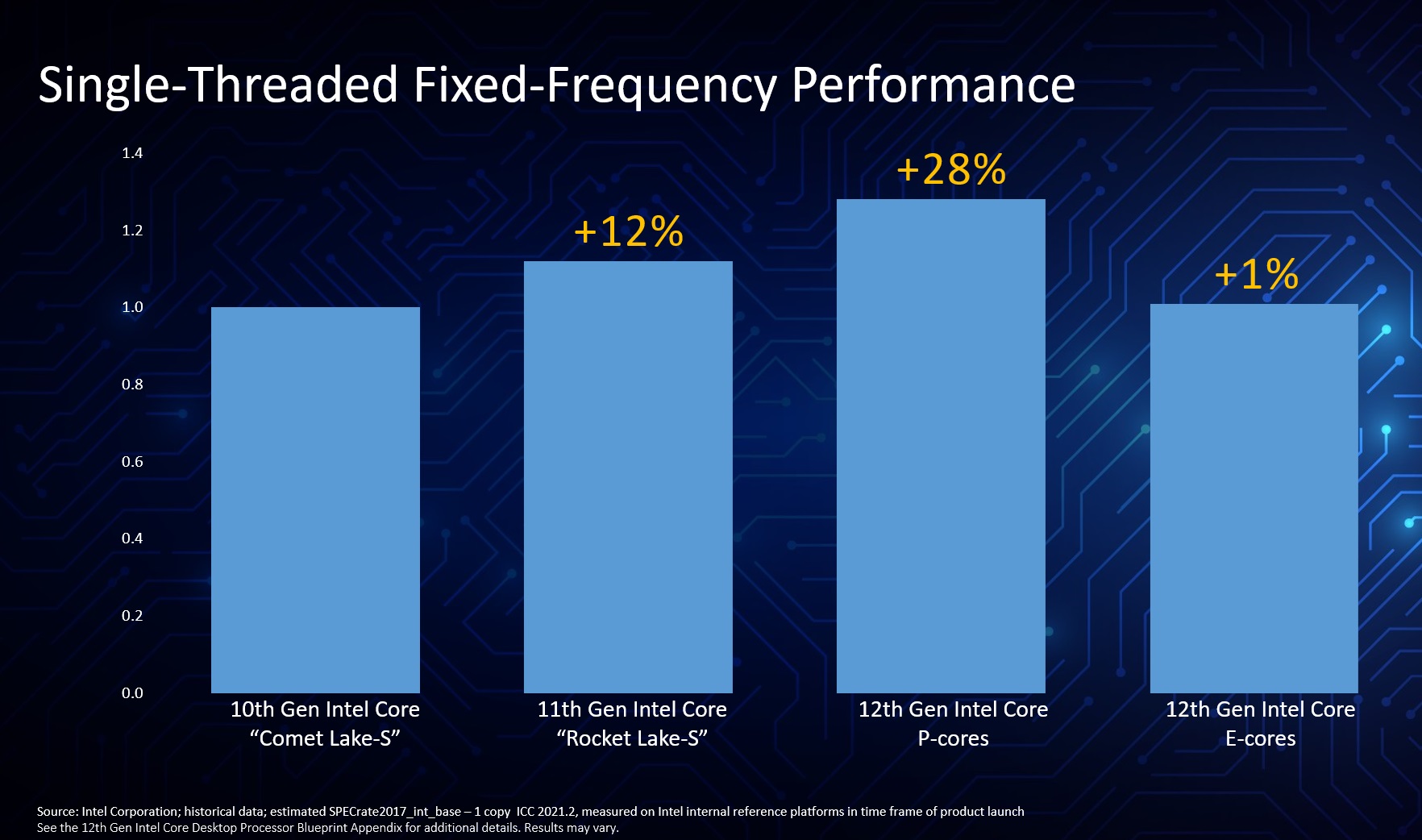 Even after we have already performed a respectable amount of performance tests ourselves, it is hard for us to say whether the magic secret of Alder Lake lies in its efficient or performance cores. indeed, Intel Claims that the performance improvement at the same frequency is one of the highest we have seen between different generations, and that it stands at almost 30 percent compared to Comer Lake S processors such as Core i9 10900K.

Many who have heard of Alder Lake design have assumed that E-Core cores will be weak, useless and mostly a recipe for software complications. Intel Claims that not only are these cores not weak, they are at least strong cores like the ones we were used to seeing in Comet Lake S. That is, a full composition of 8 cores E-Core And 8 P-coresCore Can a potential processing volume of an octa-core processor that until recently was considered the last word, plus eight cores with significantly higher processing capacity that will lead each task. 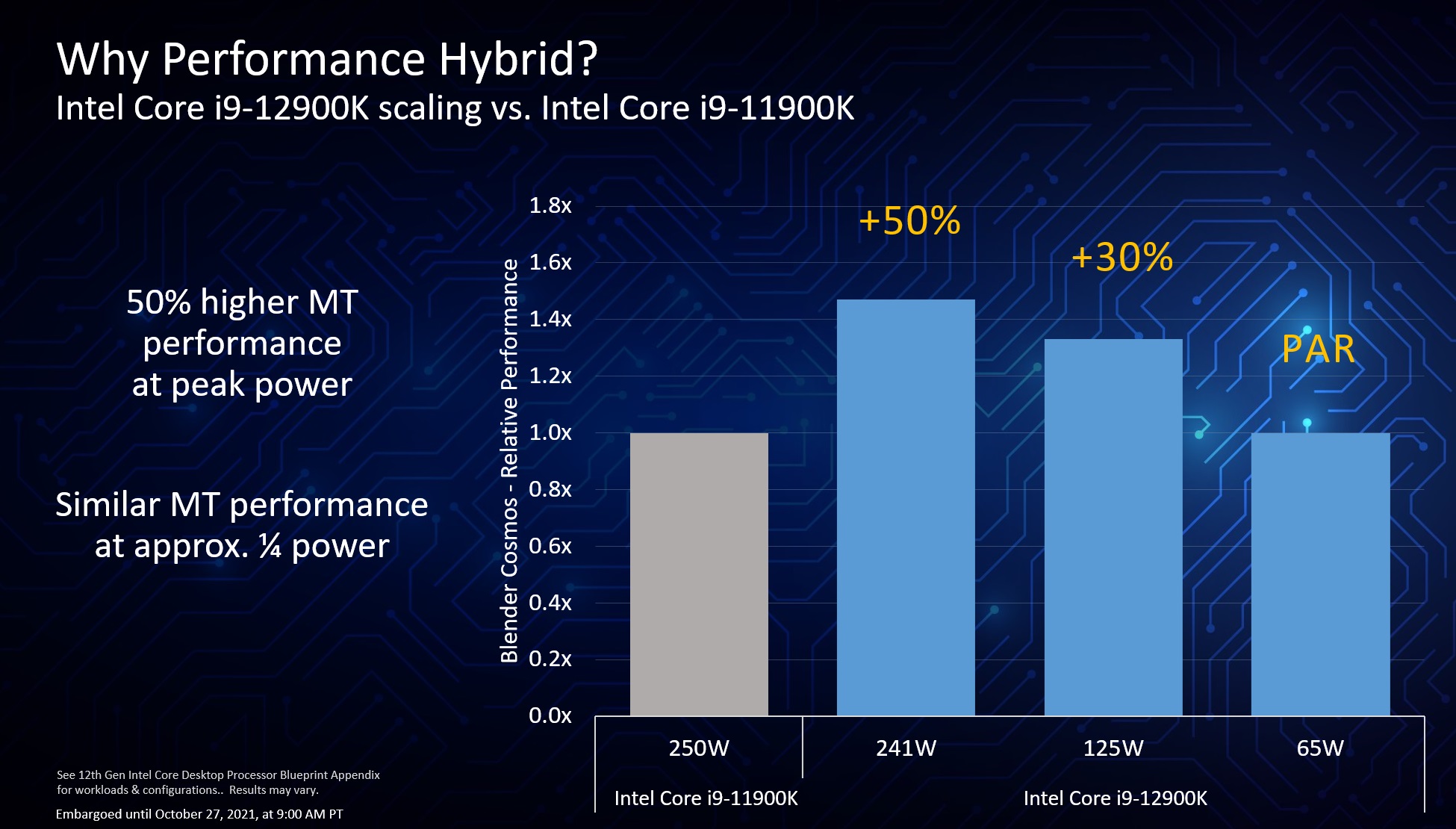 Another grandiose statement is that Alder Lake processors will be so efficient in multi-core processing thatCore i9 12900K will only need 65W To do whatCore i9 11900K makes in250W. Of course we take this on a limited warranty, as silicone works in a way that gives priority in such a situation to an even slightly more efficient architecture due to the high voltage that theCore i9 11900K itself. 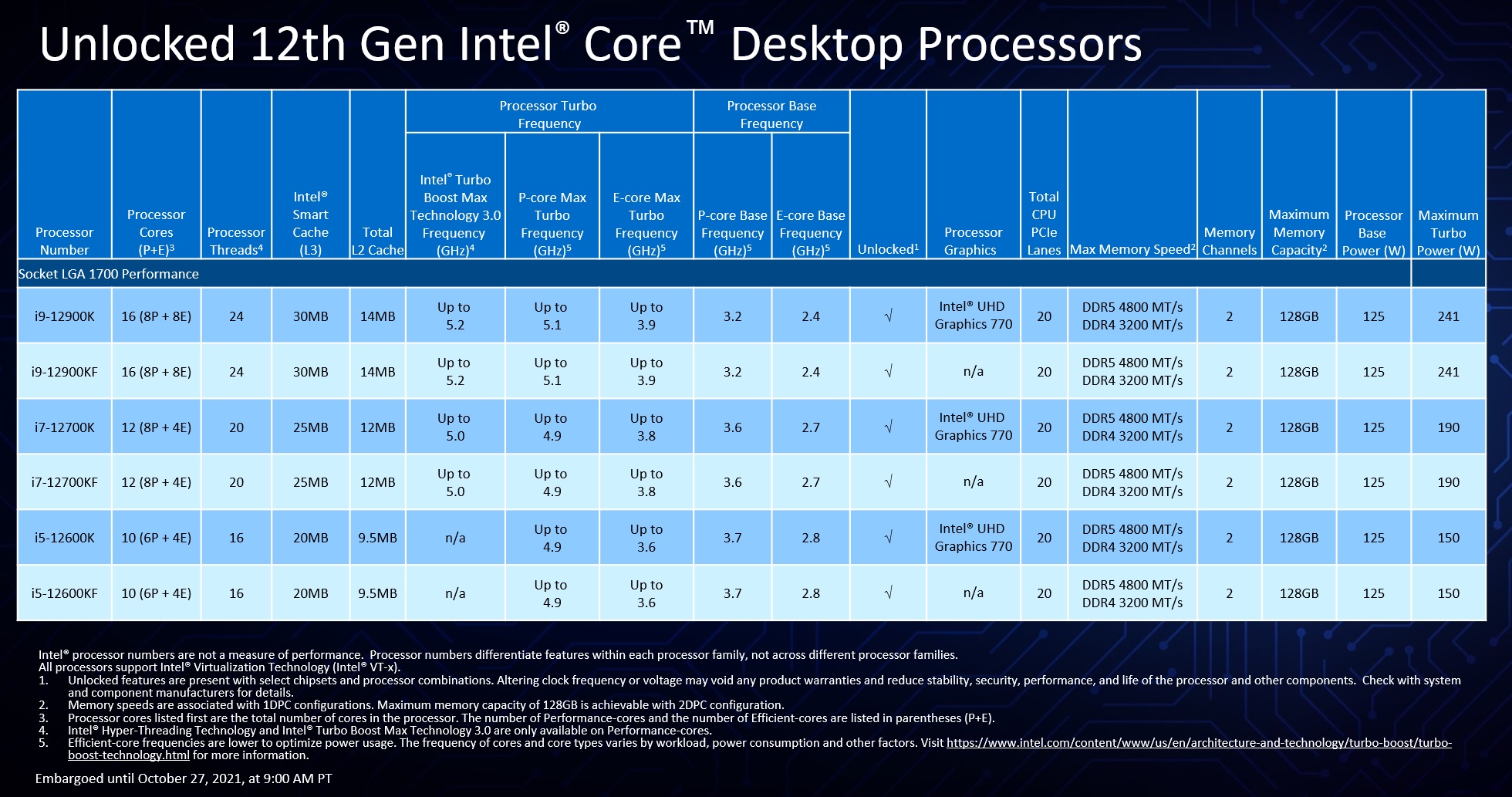 With your permission, we will skip over some technical details that we will expand on mainly on the launch day, and move on to the products you are expected to see coming to the shelves very soon.

As mentioned, with the 12th generation Core processors comes a new holder and with it motherboards based on a new chipset. The LGA1700 bracket will be developed with a variety of motherboards which are also now becoming official. As a high-performance platform, the first wave of Alder Lake will start with processors that can be overclocked from Core i5 and above. Later we are expected to see Processors Locked for overclocking, as well as cheaper series that will surely come with motherboards with cheaper chipsets.

The special composition of large cores and small cores allows Intel to "play" with the quantities according to the market segment in order to create different levels of performance when:

Processors Holders of the suffix F, In the best tradition they are Processors Which do not contain a built-in graphic core. The graphics core is the one we know from Rocket Lake S processors for example Core i9 11900K. Here it gets a frequency acceleration and becomes a more powerful exception. We will expand on its performance after launch with performance tests compared to other graphics cores.

The P-Core cores contain the HyperThreading function of Intel For capillary splitting, while the E- coresCore Do not contain this function. As a result, the capillary composition of the processor as Core The i9 12900K for example will have 16 cores but 24 capillaries. Capacitor composition of sample processor Core i5 12600K will have 16 capillaries which are 6 cores P-Core With HyperThreading (which are 12 threads) and 4 E-coresCore.

In the table you can also see differences in data such as cache memory from second and third level. In general, the sharp-eyed and knowledgeable can see that the cache memory in these processors is large compared to what we knew in the other generations at the second level reaches 14 MB and a third level at 30 MB. For comparison, toCore i9 11900K 4MB second-class volume and 16MB third-level XNUMXMB.

The official heat envelope of processors Alder lake To be launched in the first wave stands at 125W. This is not exactly the same definition we knew in previous generations but more of a guideline for supply. Depending on different loads and turbo behaviors, we are likely to see richer vehicles actually arrive at higher powers. On launch day we will cover the issue of power consumption and also compare it to previous generations and competition. This is not to say by the way that in any multi-core effort we are likely to see a power consumption of at least 125W.

Prices are expected for the new processors

Here are the recommended consumer prices for 12th generation processors Intel. It is important to note that these are recommended prices before VAT and a variety of taxes:

This pricing puts the new Intel processors at very interesting points in front of processors AMD. God-Core i9 12900K shown in front of Ryzen 9 5900X, theCore i7 12700K vs. Ryzen 7 5800X and theCore i5 12600K directly in front of Ryzen 5 5600X. It can be argued that the F-versions without the graphics core are the real advantage, as the direct competition has no built-in graphics cores as well. Admittedly, if you look at a direct comparison, theCore The i7 12700KF is priced like the Ryzen 7 5700G with the built-in graphics core. A similar story exists between Core i5 12600KF and RYZEN 5 5600G. The consideration here will probably be according to the needs of the user.

There is no doubt that the world of processors is coming to a boiling point with the most serious competition we have seen recently between the two silicon giants. Here at HWzone we prepare a blue-and-white cover for a product whose development and production background is blue-and-white as well. See soon for information about performance in a variety of software and games, direct comparisons with previous generations and competition and in-depth technical information about Alder lake And the new motherboard platform.

In the meantime, we'd love to hear from you - does all this look promising? How do you think the world of processors will look on the day of the launch of Alder Lake? Do you expect an AMD backlash? Share in the comments