In the not-so-distant past, in the days when video cards were no rarer (and more expensive) than diamonds and other gems, quite a few questions arose about Intel's insistence on incorporating graphics processing cores in almost every model it markets to consumers including the advanced ones for avid gaming enthusiasts. At the time, it was actually the biggest competitor AMD Which has had success with models that in the vast majority of cases have given up on graphics cores in favor of focusing on optimal performance of the overall processing cores and memory The cache - but these days we all already know that the reality has become completely different, when suddenly the announcement of models RYZEN New in the APU configuration can be considered as an especially important development for all those who are tired of waiting for the price of video cards to drop before they decide to assemble the following system for themselves.

A few months after the launch of the first Ryzen 5000 models with built-in graphics cores for the OEM domain that is (usually) out of the reach of average home consumers, we receive an announcement that two latest G models from the same family will be offered to anyone, starting at the beginning of the month This coming August - with six and eight cores Zen 3 which is a serious leap compared to the G models previous editions marketed to consumers of all types with a pair or four cores Zen only.

The octagonal Ryzen 7 5700G processor will be the top choice, at a recommended price of $ 359 before tax surcharges for which you get eight Zen 3 cores supporting SMT at a basic 3.8GHz frequency and a maximum turbo frequency of 4.6GHz, memory support DDR4 Dual-channel dual speeds 3,200MT / s, memory An L3 cache with a total capacity of 16MB and a core Vega Built-in with an operating frequency of up to 8GHz that delivers a maximum performance of approximately 2GFLOPS - all under the power of 2,050 watts.

The Ryzen 5 5600G processor with six Zen 3 cores supporting SMT at operating frequencies between 3.9GHz and 4.4GHz and a built-in Vega 7 core graphics will be priced at $ 259 excluding tax, as another offer that should be significantly superior to the Ryzen 5 3400G square Which was the most senior APU model it offered AMD To the general public so far. 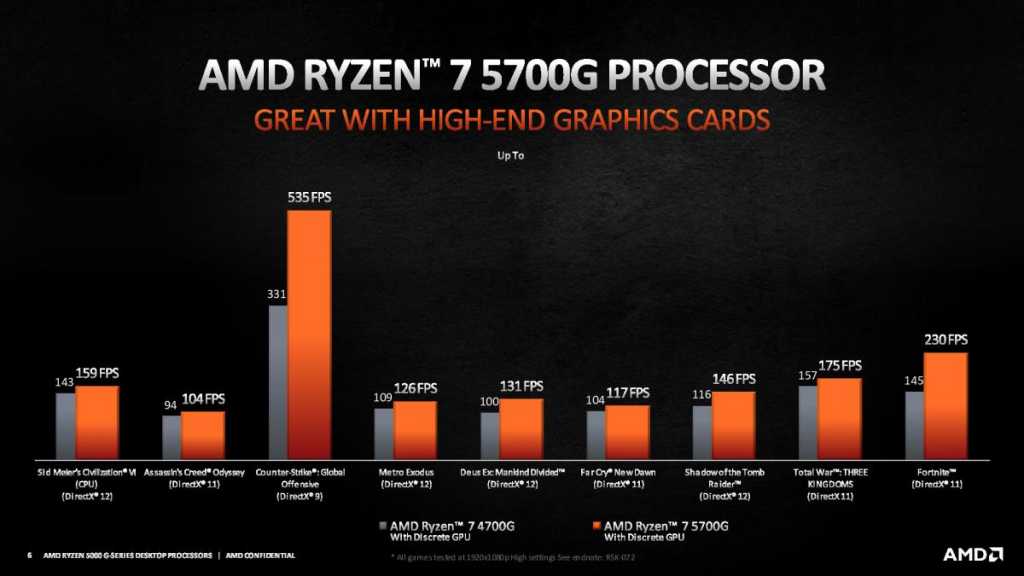 Consumers who were willing to compromise on warranty and support issues could have gotten themselves the Ryzen 7 4700G and Ryzen 5 4600G processors before, that's true, so the performance in the new APU generation will not be too revolutionary - but good to see AMD Makes this option more formal and common for users, just in time for the transition to use built-in cores in RDNA 2 architecture and support technologies like DDR5, PCI-Express 4.0 and possibly even Thunderbolt 4th generationRYZEN The main of next year.