Connecting to the creative side: Asus Z490 ProArt Creator motherboard in review

The prestigious ProArt brand of Asus Comes into the world of motherboards with a very elegant model - how does a product in a field designed to fascinate creators and editors feel? Answer inside

Hardware maker Asus is accustomed to launching a host of motherboards whenever Intel or AMD Launches a new chipset. This is a procedure we have known for about two decades, and sometimes we get to see a new kind of branding and approach coming to these motherboards.

Along with the launch of the Z490's chipset Intel And a series of processors Core In the tenth generation, she decided Asus That it also gives a stage to its ProArt brand, a relatively fresh brand that appeals mainly to visual content creators. Under the name ProArt you can find products like laptops and especially advanced screens today. I'm not talking about cheap products that Limbo manages to pass below a low threshold of requirements, but about real premium products like a 34-inch convex screen that costs close to six thousand shekels.

This time ProArt is also taking a step into the motherboard category of Asus with the-Z490 CREATOR - A ProArt product that I must admit I did not expect to reach for this particular chipset, but a welcome development anyway. 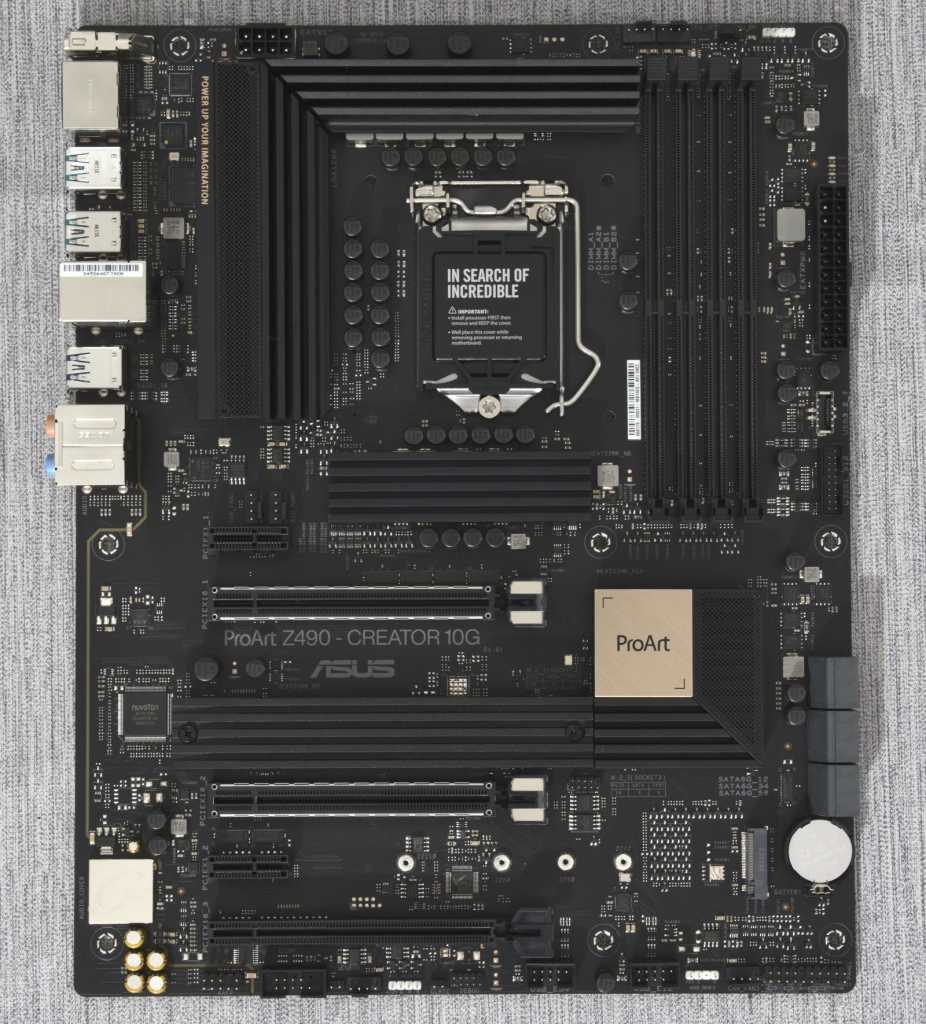 The CREATOR 10G is probably the first of many of the ProArt boards for the future. This motherboard carries different design lines from anything we have seen in recent years from Asus, and personally I think this design is not bad at all. Many users for whom their computer visuals are important are looking for something solid, dark and with a relatively minimalist and not flashy design. This motherboard is ATX standard and uses the Z490 chipset Intel. Thus, it is actually designed for those who want the tenth generation processors for the Core family, Processors Launched only this summer under the direction of theCore i9 10900K has 10 cores. 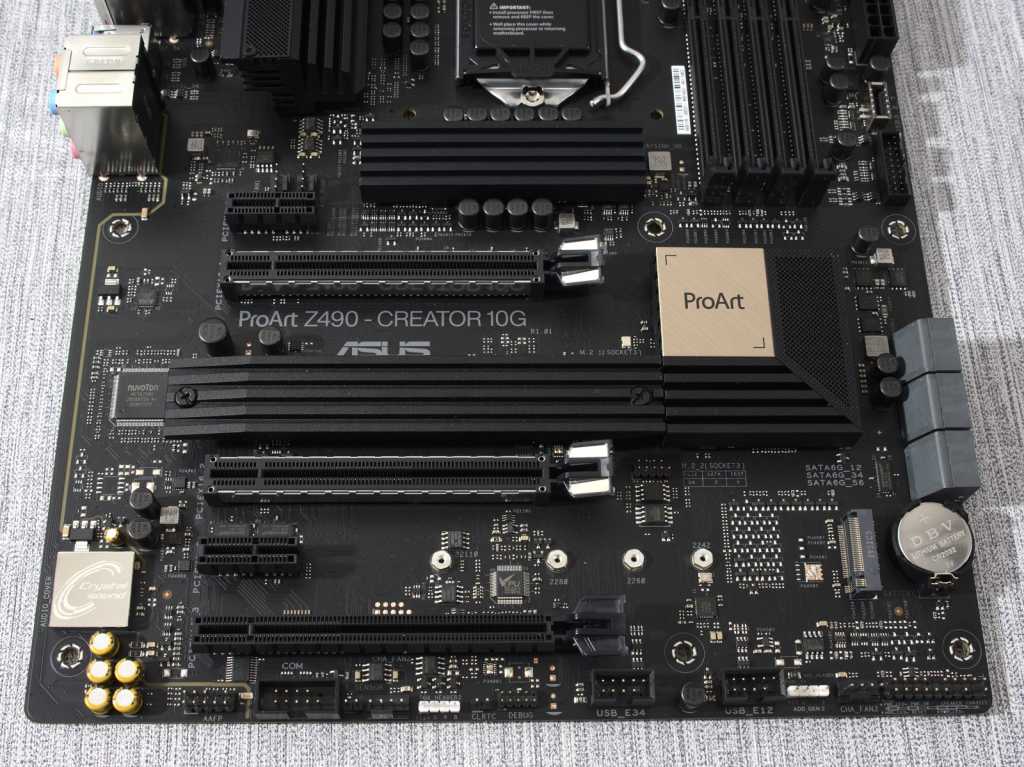 When it comes to volume - there are two M.2 interfaces on this motherboard, one of which comes with a heat sink that screws to the board. There are also six SATA ports for hard drives that use the interface. The various PCI-Express ports are suitable for an array that includes three full-interface-length cards, although the top gesture works on X16, the middle on X8 and the bottom on X4. This motherboard does not support SLI technology of NVIDIA, Although the use of the two PCI-Express interfaces with the steel chassis will result in X8 traffic for each. It is important to remember that the use of technology is conditional on a small fee toNVIDIA, And that's it Technology Which is in very rare use today. 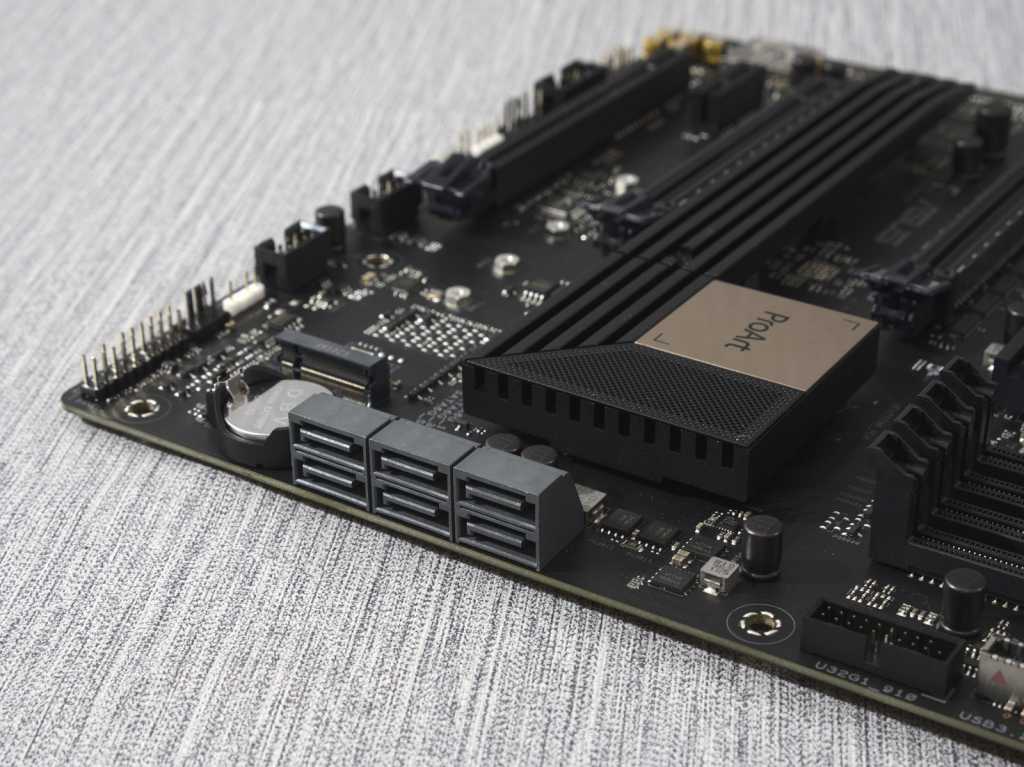 Hard drives in the SATA interface are also a product that is still difficult to replace, since high-volume mechanical drives are a consumable product. Six SATA interfaces promise to cover most of the target audience. 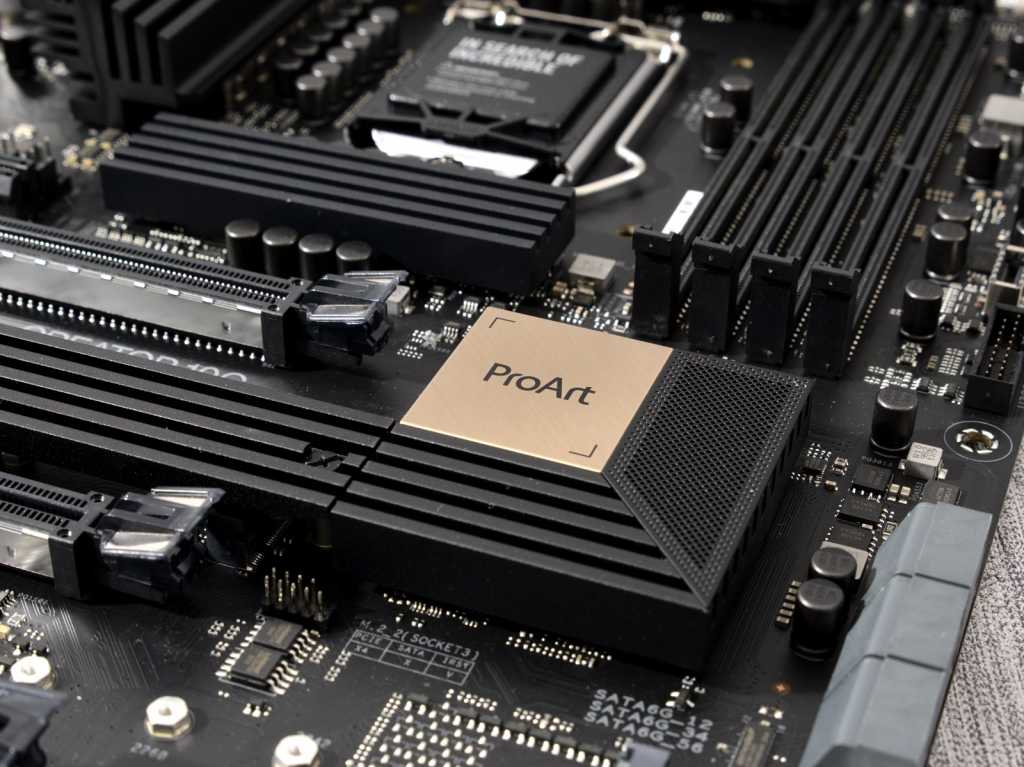 Beneath this interesting heatsink is the Z490's chipset Intel. This chipset is very similar to the Z390 we have known so far in its capabilities, as it uses PCI-Express in the old 3.0 standard. In fact, currently using the tenth generation processors of Intel Will bring standard 3.0 to all PCI-Express means in this motherboard including the M.2 and expansion interfaces. Like other Z490 boards, too Motherboard It is built to receive future standard support PCI-Express 4.0 Used by processors that support it. Standards connected to the processor (including one M.2 standard) will be upgraded in their traffic accordingly. 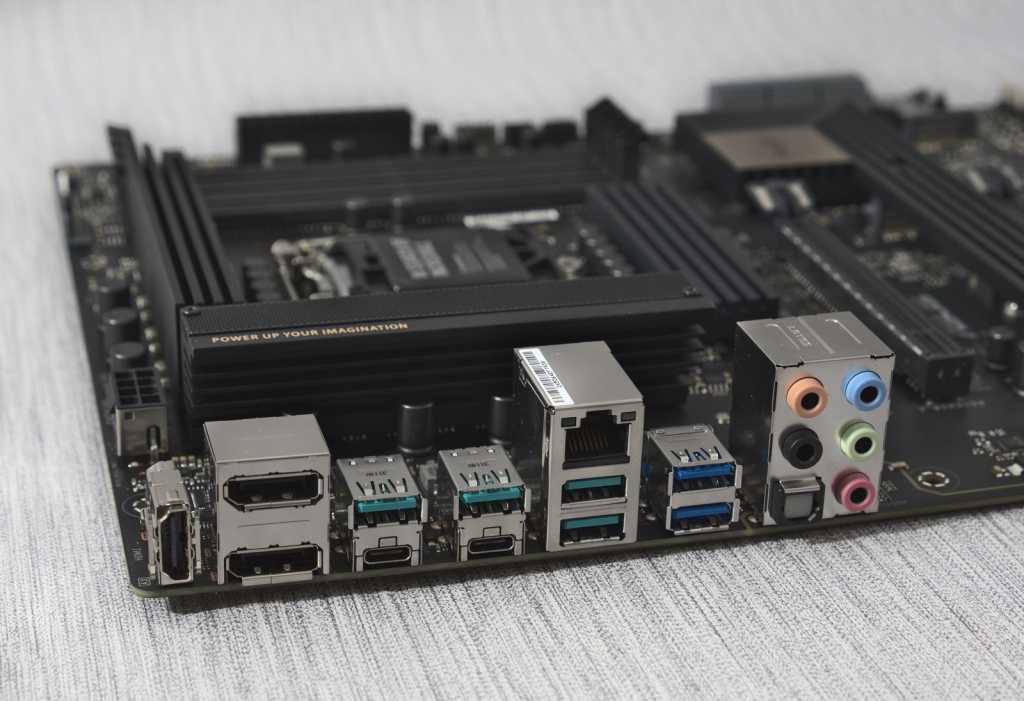 What becomes Motherboard For one that suits creators? I think the answer is mostly the false interfaces the user gives. Naturally content creators will be looking for the features that are most important for connectivity with the same means used to create and store content like external drives, cameras and other equipment.

The rear IO panel is one of the features that make this motherboard exceptional. There is audio in 7.1 channels and a Realtek ALC1220 voice controller and that's nice, but in addition there are four 10Gbps USB ports alongside two at 5Gbps. The network controller is at a speed of 2.5Gbps per controller Intel. There are two DisplayPort inputs and an HDMI port. "moment, Entrances DisplayPort? "'Well, the two USB Type-C interfaces on the back of this motherboard are connected to the interface Thunderbolt 3 at 40Gbps and include all the capabilities of the protocol including signal transmission Video, him Video Which enters from the video card in the system to the same inputs DisplayPort. 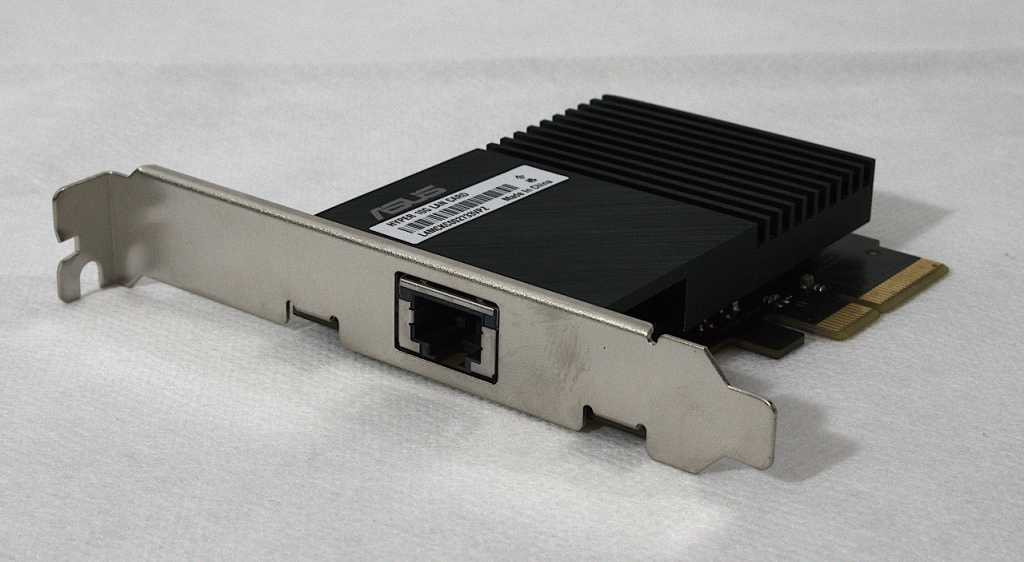 Here's why there is a "10G" in the name of this motherboard. Along with the ProArt CREATOR (capital letters, important) you get an ultra-fast network card that supports 10Gbps traffic. This network card is based on the Aquantia ACQ107 controller. It is true that 10Gbps home or business internet is still not common and all available in our country, but even if you are connected to 1Gbps using fiber to connect to the motherboard, such a card still opens up many options. For example, using a NAS server to store content can be connected directly through it, and today there are servers storage Many and not at particularly high prices that would allow such fast connectivity.

In many motherboards, the manufacturer implements the advanced network controller and simply adds a port on the back. Here, Asus has decided that it includes a separate card for such a purpose. I think this is an advantage over such motherboards. A user who decides in the future to upgrade and switch to another motherboard will simply be able to take this card and install it in another system. Who knows, maybe a user will purchase a motherboard that includes such a fast network entry as part of that board, and will want one more. This specific network card comes with a body Cooling Very respectable, much more than really needed, which is an advantage for me. 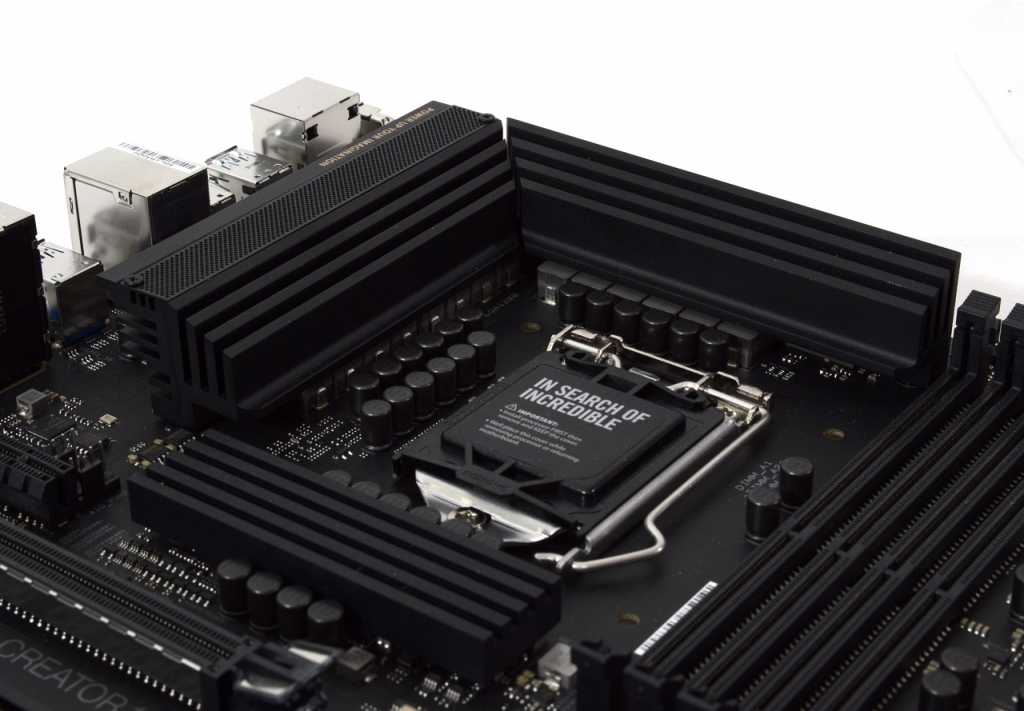 Quite surprisingly, overclocking and a CPU power generation system is not the most important marketing material for Asus with this product, and yet decided that it includes a very solid system for dealing with Processors Hungry as theCore i9 10900K. The ProArt CREATOR 10G includes ribs Cooling With a large and respectable surface area, on an advanced power supply system such as the one it implements in its gaming products, only without RGB rule. 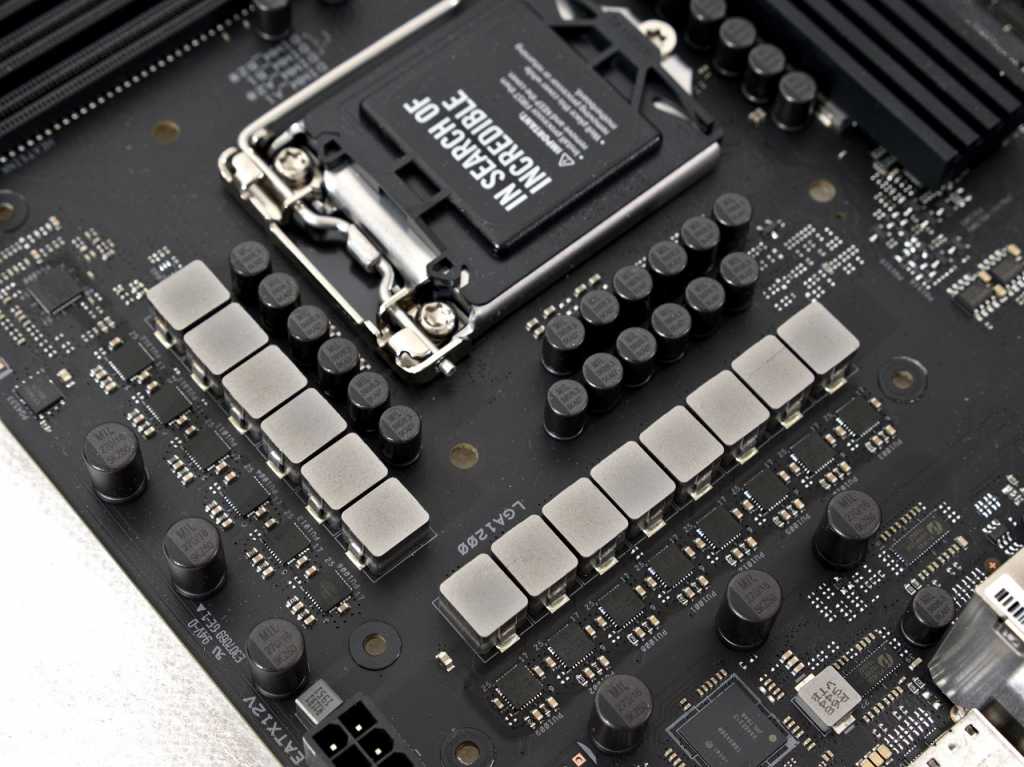 The power system is fed from a single 8PIN connector, and here is actually the bottleneck in overclocking to this motherboard, even though it is a connector that can carry over 400W in this case. Still, it's a power consumption thatCore i9 10900K can pass if taken Overclocking Far away with him.

Depending on the requirement of the hungry processors, this voltage stabilization system takes 12V from the adjacent socket and converts to the voltage required by the processor at that moment, usually over the range between 0.7V and 1.25V. There are 12 stages for the CPU cores and 2 more stages for the built-in graphics core. There is also a very respectable amount of filters on the way to the bracket in the form of solid capacitors, which I can always appreciate.

To sum up this system briefly - suitable for overclocking in air cooling or water of any possible processor for the chassis, although I would not get carried away with theCore The formidable i9 10900K. Quality components, fixtures Cooling Good.

Who is the board for and is it worth the price? 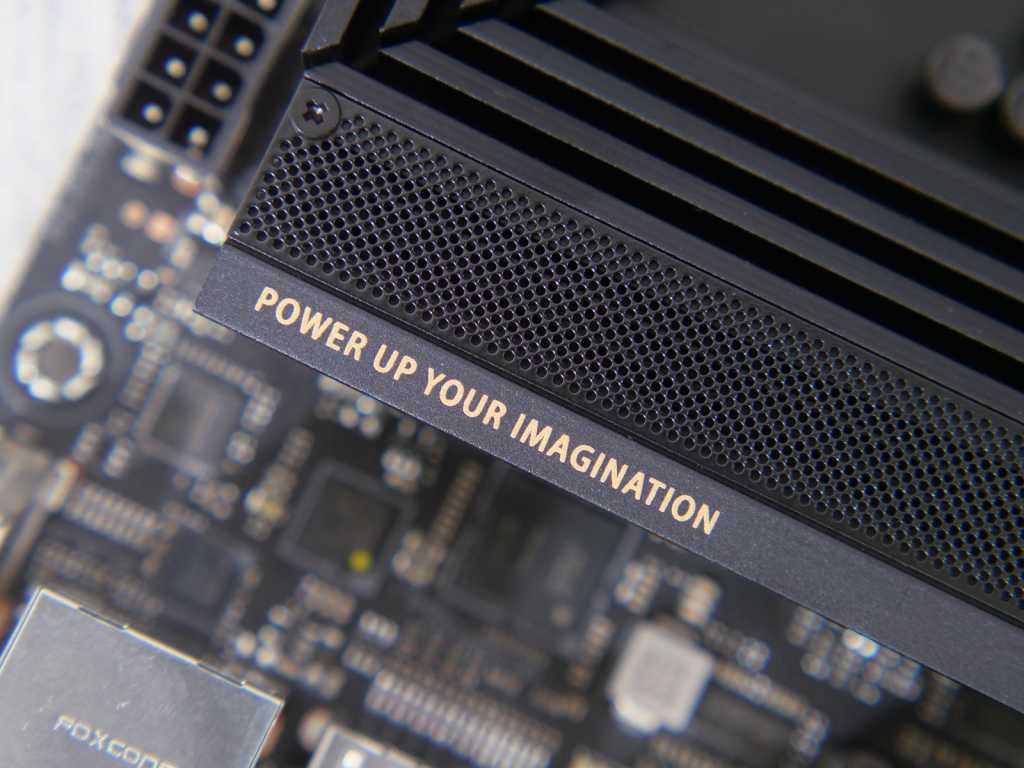 The target audience of Asus with this motherboard is those people who are looking to build a computer to create content or any other action that the interfaces justify. Its average cost today in Israel is NIS 1,650 and this is a price that can be attributed mainly to the high end of motherboards for the consumer today. It is not to be expected that a computer with a total cost of about NIS 3,000 will be included Motherboard Such, since it is also not consumer correct.

Admittedly, sometimes users who build advanced desktops look for such and such ports, and all they encounter is overclocking and RGB. With ports Thunderbolt 3 and advanced network connectivity The ProArt Z490 CREATOR 10G offers something boards if others in this price tag do not offer, and on the other hand do not compromise too much on features that characterize gaming boards. Visually, Motherboard It is very different from others and it is also a point of privilege for him. 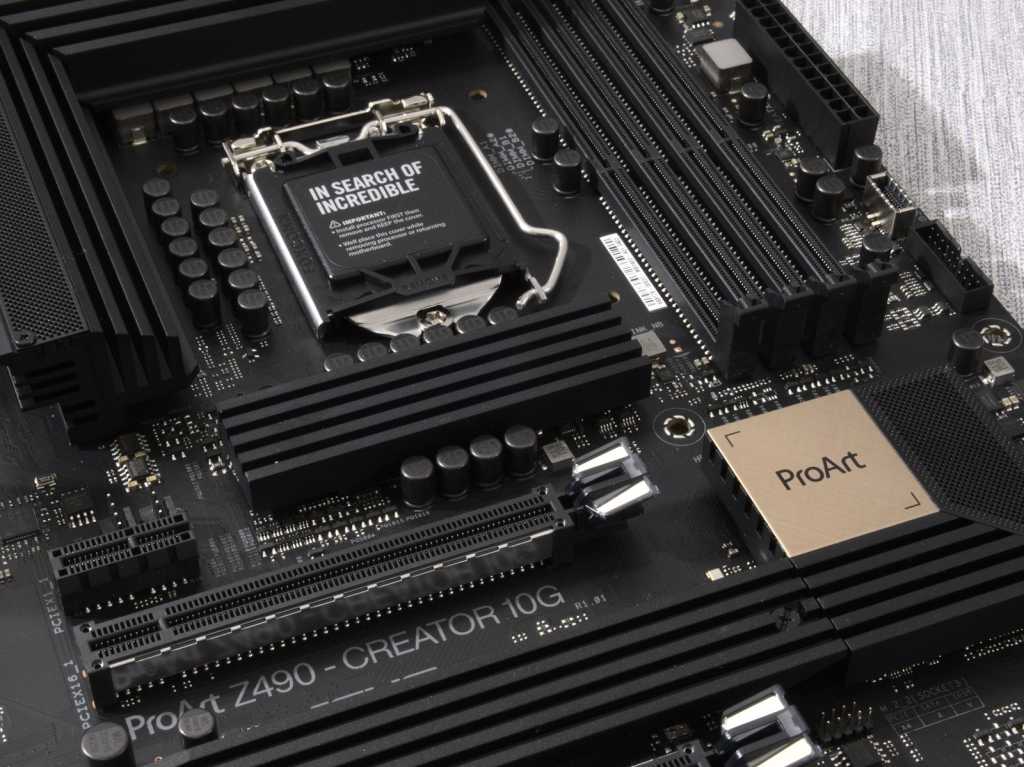 This motherboard fits into HWzone's list of recommended motherboards due to what it offers. The price is a bit tough, but the value is special and unrivaled for it. This, provided that the appropriate processors for the chassis are the ones that come to serve the purpose of the user, a task that is not easy for productivity these days for Intel in relation to the fierce competition on the other hand. Asus - For your attention, ProArt is also possible in the AM4 chassis for processors AMD.

I would love to see Asus in the future go even further with ProArt. I want to see motherboards that do not feel sorry for the interfaces and ports, and take advantage of the available traffic in the chipset and system, while assimilating additional controllers in the board. More USB, more Network, More fast connectivity - also wireless please. When gamers are not the only target audience, products that appeal to craft and work stations are always a welcome addition.