You can feel the intense heat while the summer season is upon us and the world of hardware is heating up accordingly. 11th generation of processors Intel Launched recently and with it the 500 Series chipsets. This is a great opportunity for motherboard makers to introduce their innovations and this time a player who feels like he's visiting us every year, the PRO rank of GIGABYTE. 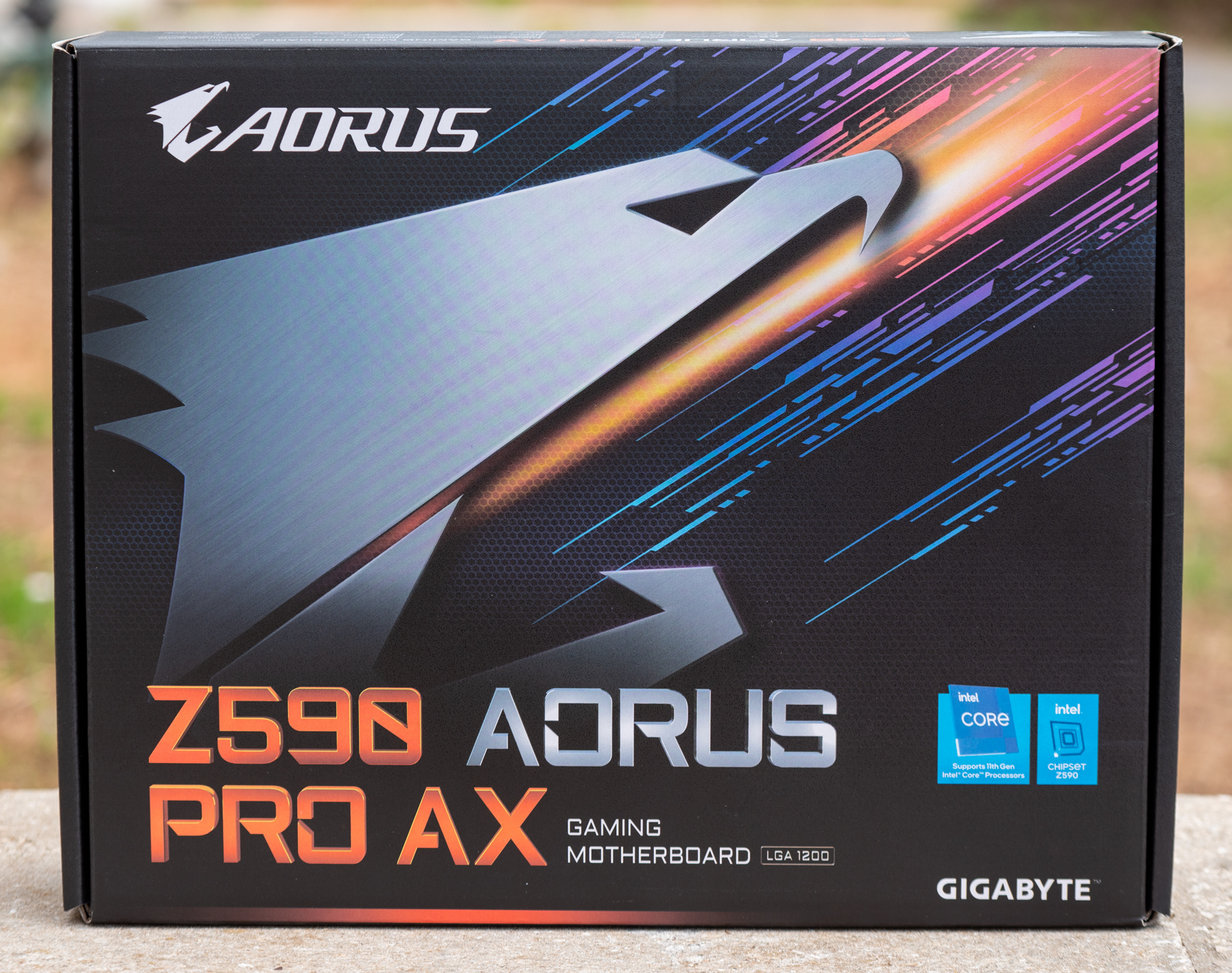 The gaming brand of GIGABYTE on behalf of AORUS Got a very serious boost since it was founded, much with the help of sites like ours. The decision was to clearly separate products and create direct competition with older gaming brands that exist among competitors.

There is a hierarchy between product names, and this can be a bit confusing. The average user does not always know the difference between ULTRA or MASTER or ELITE, these are names that do not say too much. Some order for you with AORUS board models:

ELITE is considered the lowest severity level, with PRO above it, then ULTRA. Above these is the MASTER and at the top the XTREME. Of course ELITE under AORUS It is still a respectable degree of severity given the truly budget-free budget choices AORUS.

The PRO (in our case PRO AX) is considered to be a fairly popular mid-range grade, featuring enough advanced features from above along with an acceptable price tag.

There is also another new rank of GIGABYTE In order to compete in the niche category of Overclocking, on behalf of AORUS TACHYON. We may visit her in the future. 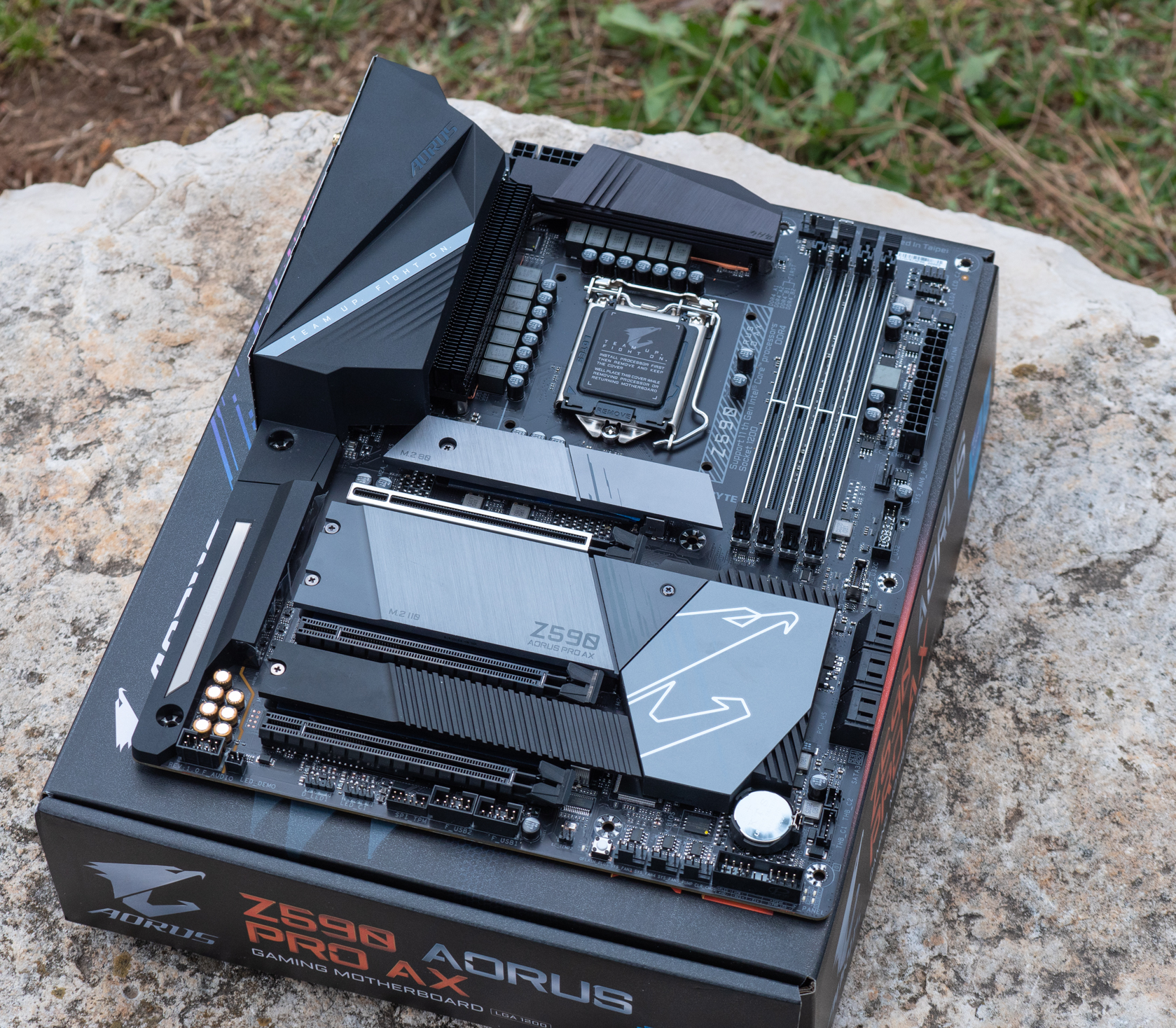 As expected with a series of advanced motherboards in our unconventional era, average prices for these hardware products are not always easy to digest. The Z590 AORUS PRO AX comes with a price tag of about NIS 1,699 and is considered a real premium, although historically we have seen PRO boards come in a few hundred shekels less than that.

This motherboard is based on the new chipset from Intel Z590 and contains natural support for Core processors in the 11th and tenth generation. As well as PCI-Express 4.0 support offered by processors Intel The new ones. The new PRO AX also comes in a size standard ATX. 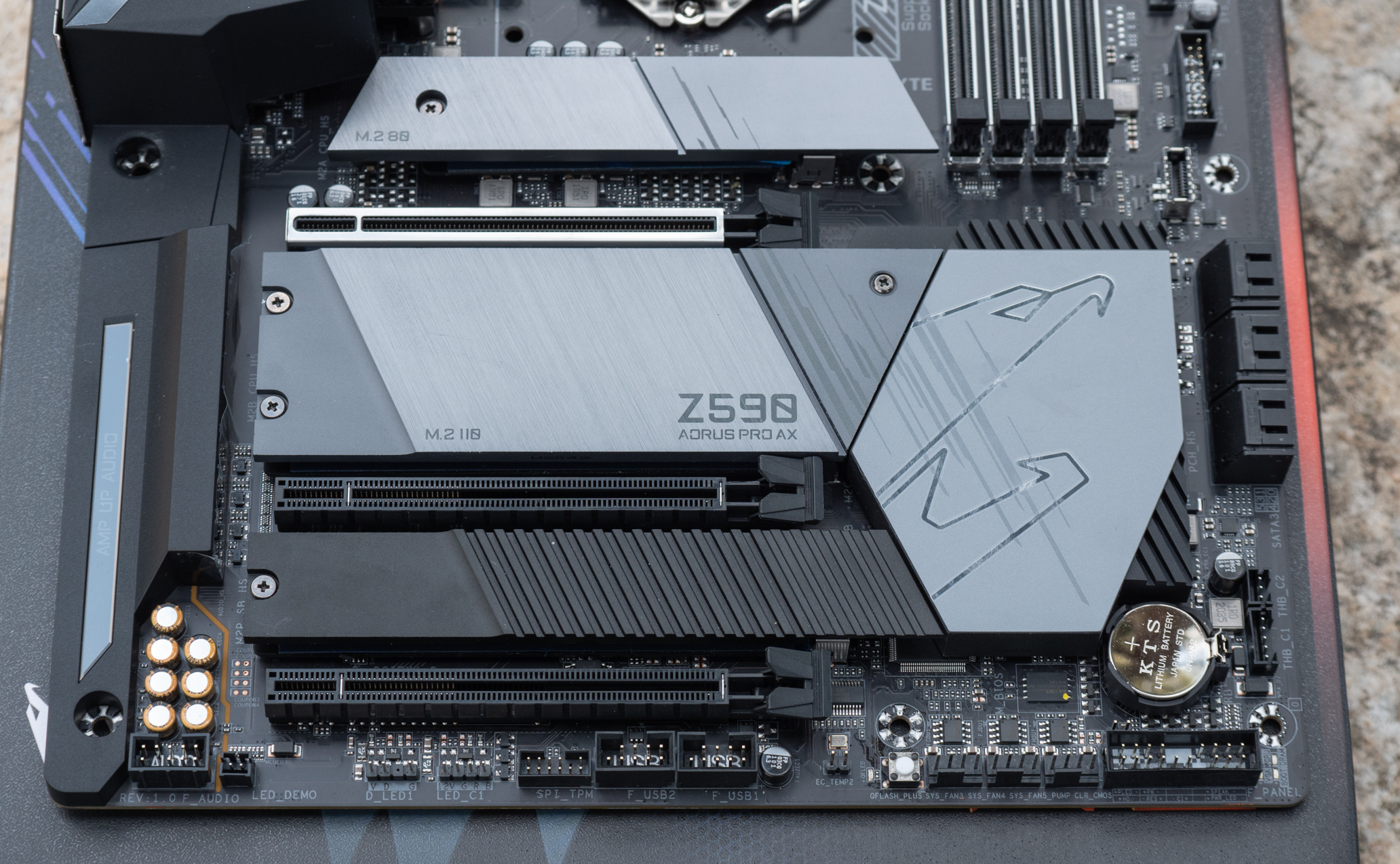 Visually, GIGABYTE Continues with a black and silver theme. A nice and elegant theme. Three full-length PCI-Express interfaces also ensure healthy compatibility for the various expansion cards. However, it is important to note that the middle and lower interface trams operate in the X4 3.0 standard. 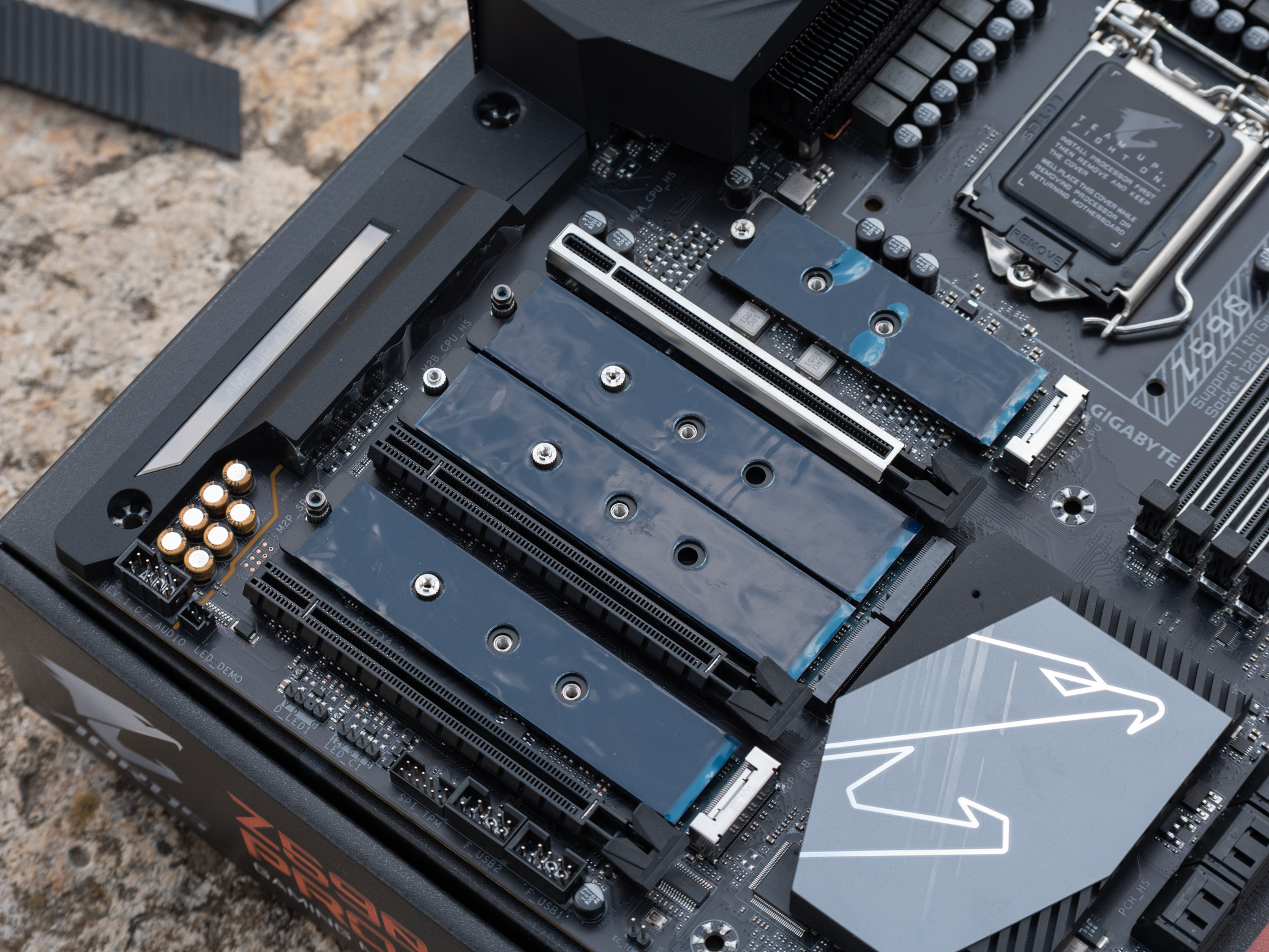 One of the advantages of the Z590 is what you see in this picture. The addition of 4 PCI-Express channels to the 11th generation processors enables the occupancy of four M.2 interfaces on the drives SSD Fast. It is important to note that all three interfaces other than the top are still running in the old 3.0 standard and not 4.0. What you see in the picture are the four interfaces after removing the top heat sink. There are also thermal pads for the bottom of the drivesSSD, And beneath them are aluminum surfaces. 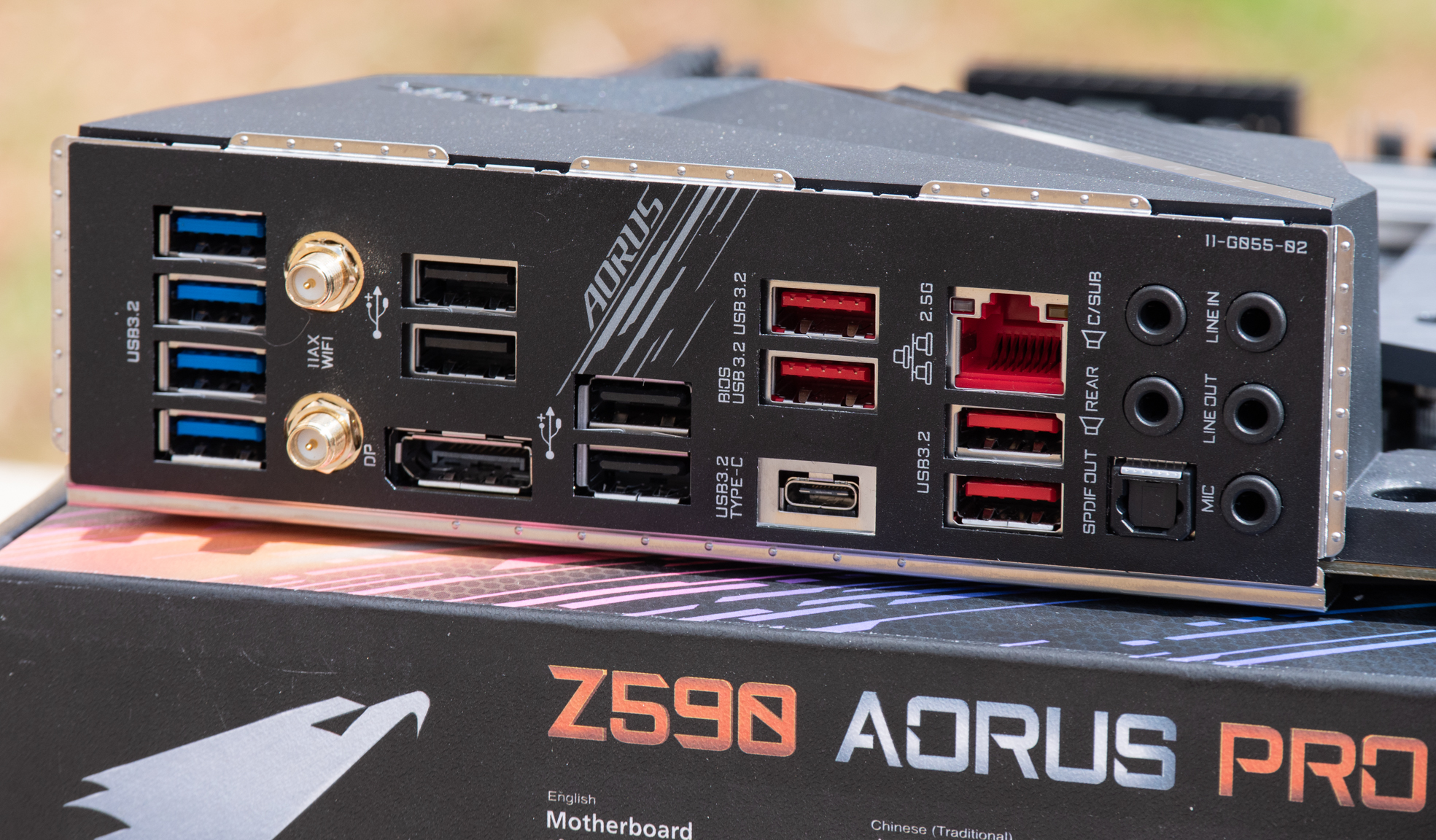 GIGABYTE knows I like back ports, probably. In this motherboard we find four USB ports in standard 2.0 (good for peripherals), four at 5Gbps (in blue), four at 10Gbps and another Type-C type at 20Gbps. Alongside these are standard audio ports, a 2.5Gbps network input network controller Intel And antenna connections. The AX add-on for this motherboard model exists due to its support for the WiFi 6 AX200 standard that allows wireless traffic of up to 2.4Gbps. 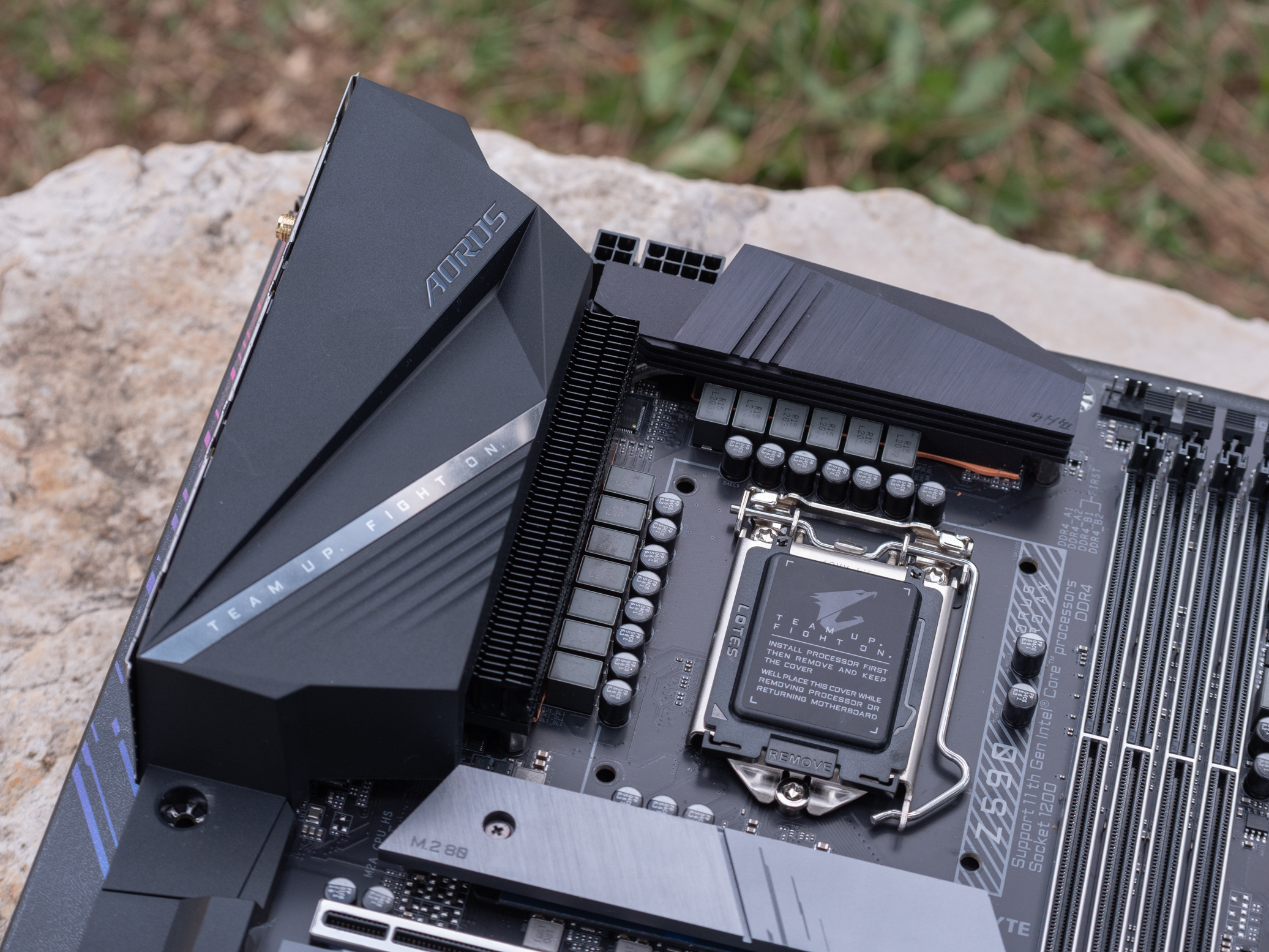 The power supply system for the CPU cradle has always been the strongest part of the PRO rank, as it incorporates elements from more advanced models, or at least with similar capability. It's always fun to see my body Cooling Using aluminum fans and copper pipes, andGIGABYTE Has been implementing this for several generations (at least since it received harsh criticism in the Z370 generation delayed overheating). 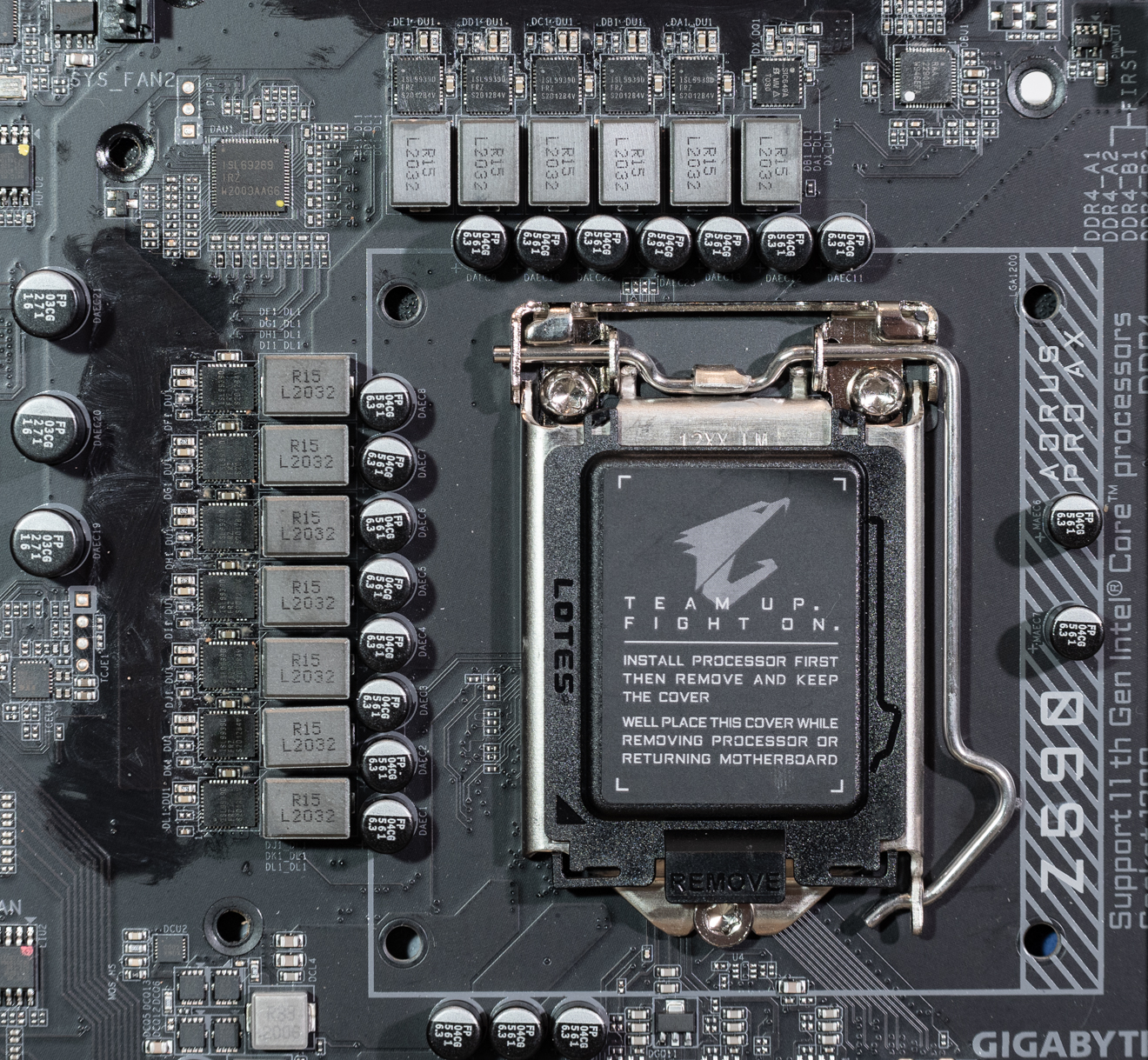 The voltage stabilization system is made up of 13 slightly crazy stages she decided on GIGABYTE Embed in this motherboards. This is a design we have previously seen in a significantly higher price tag. 12 of them are model ISL99390 from Intersil (now owned by Renesas). This is an installation set to 90A as a maximum, along with internal temperature and voltage control. The ISL69269 PWM controller controls the entire system and contains sensors for reading output voltage and temperature. Reading option through some non-computer software (such as HWinfo for example). 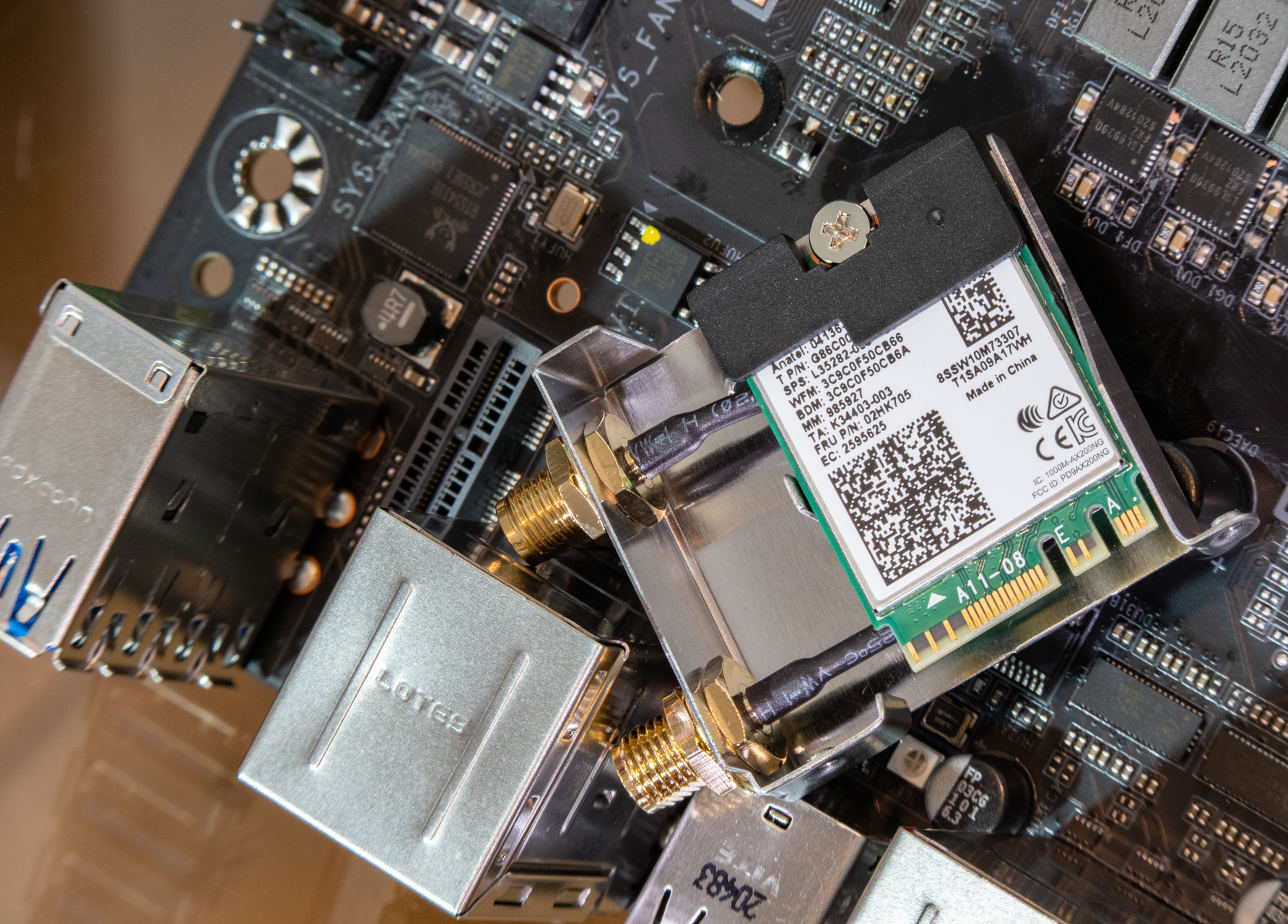 A bonus image is of what is behind the antenna connections. A small interface that operates in PCI-Express X1 traffic is responsible for the WiFi card andBluetooth. This is actually what makes this motherboard an "AX". 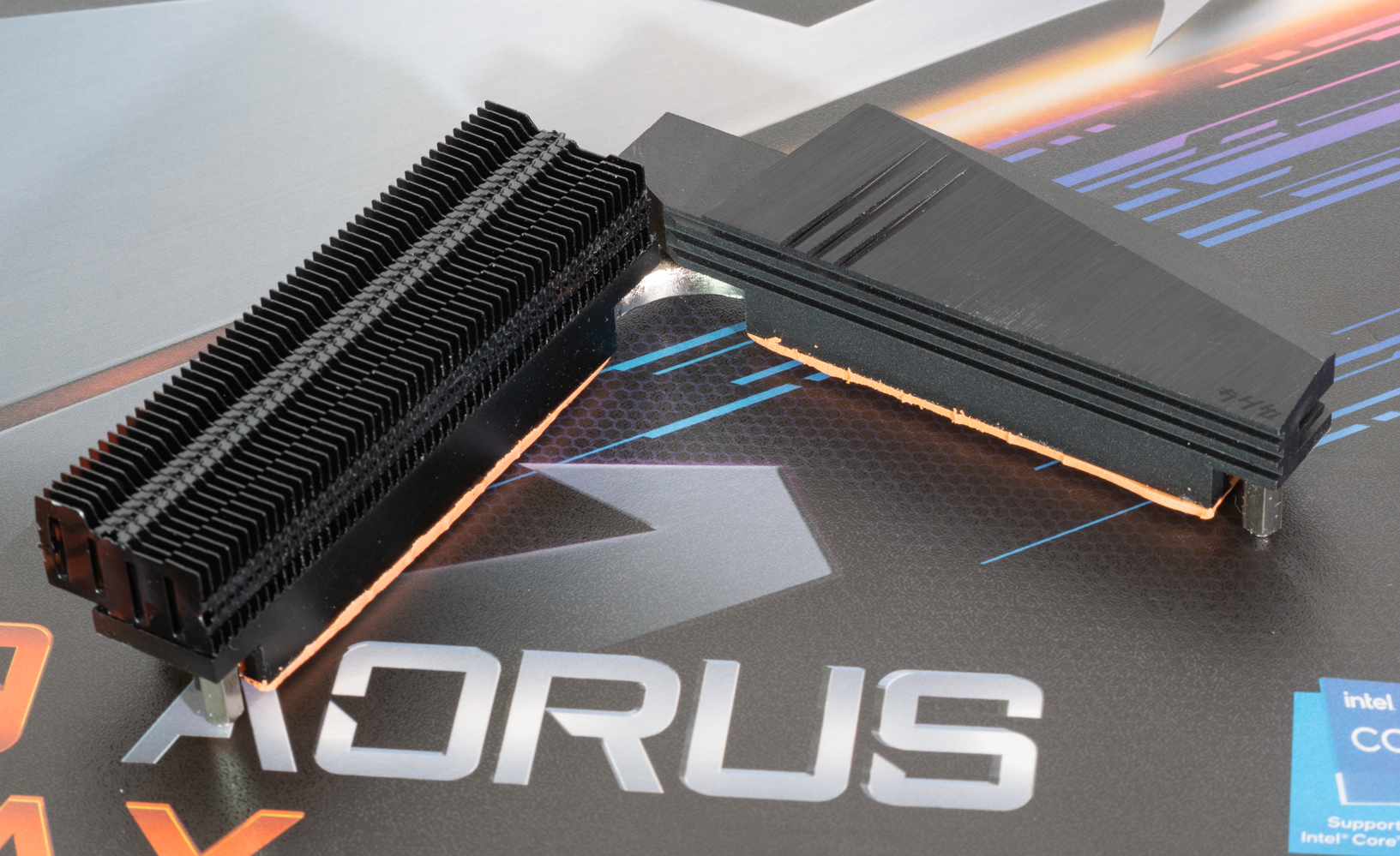 We talked about the heat sink and the power supply system, and this needs to be backed up in tests. Therefore, we examined the operating temperature of the voltage stabilizers during the effort of a processor Core i9 11900K The Hunger. 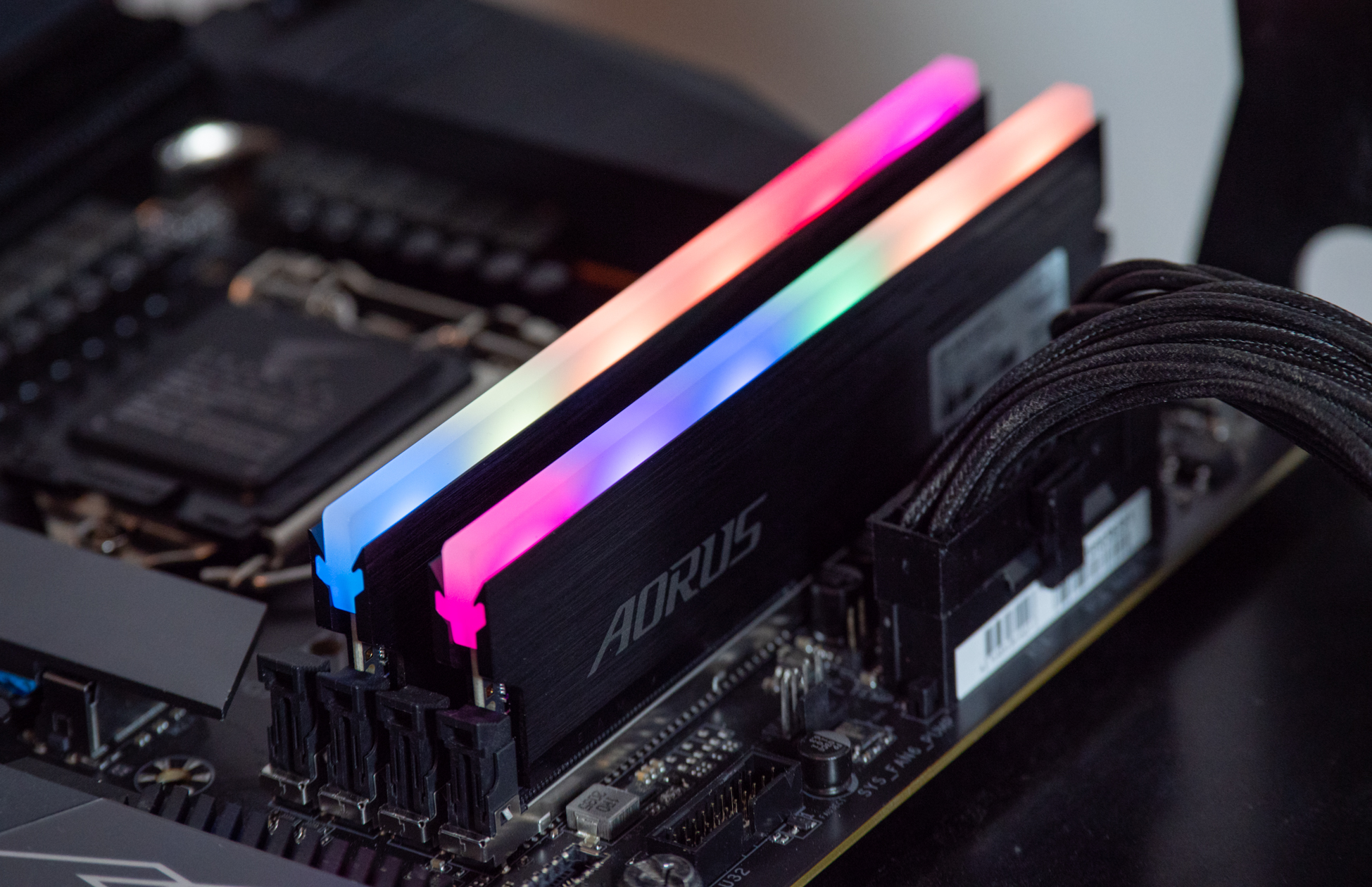 The system also included memory of GIGABYTE From the AORUS brand. Those who do not know, toGIGABYTE There is also a memory and we take the opportunity to mention it. For some time now the RGB memory of GIGABYTE Continues to get refreshed versions and improved speeds. Thanks for the appreciation, she's cool.

We tested the processor with Noctua NH-D15 cooling, as a processor like the Core i9 11900K consumes a huge amount of power. Credit to the veteran production process of Intel.

During prolonged exertion, under a room temperature of 26 ° C, the highest working temperature measured for the voltage installations was 77 ° C. This, along with partial airflow from the CPU cooling. This temperature is normal and is about 15 degrees below what we would define as "hot". Voltage regulators are set to operate up to 105 ° C before they are forced to turn on a warning and turn off. 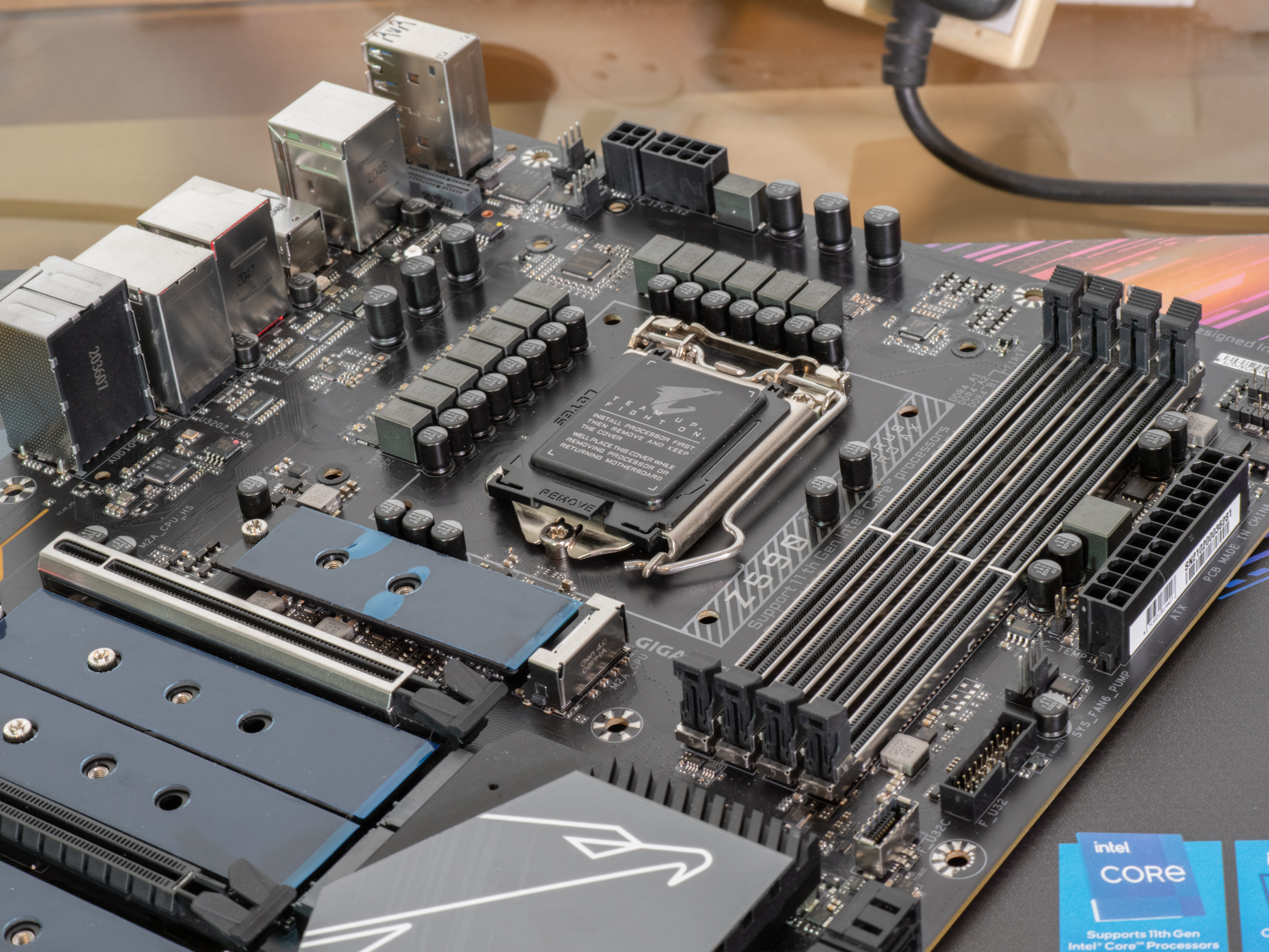 In conclusion - the same formula of motherboards continues to work with a new generation of processors Intel. One of the challenging things about writing and reviewing a product of this kind is that you sometimes have to repeat the same sentences over and over again. Generation Z490 brought initial support to tenth generation processors, and Generation Z590 brings first support to most interfaces storage And on average faster connectivity.

Z590 for us is a line alignment with the corresponding X570 platform of AMD When the only problem with the story is that of AMD Launched a year and a half ago. With the… challenging launch of Intel In the 11th generation, recommending these advanced motherboards (Z590) becomes particularly difficult. On the one hand we can tell you that this is a great and rich pleuropath for Core i9 or 11900K Core i7 11700K, and on my part we have a hard time recommending them in general. Admittedly, they have recently seen a drop in price (probably thanks to a combination of supply and negative reviews).

This motherboard can be used for Core i7 10700K or Core i9 10900K for example, which are Processors Great and also relatively cheap, but functional PCI-Express 4.0 will not work at all (the M.2 top interface will be disabled). If you look back a generation, at the price of the Z590 AORUS PRO AX Z490 can be purchased AORUS MASTER. Although the branding is different, only at the net hardware level, the advantage is actually found in the Z590 AORUS PRO AX.

This piece of hardware is more than "good", it is excellent. GIGABYTE has reached a very high level of technicality and polishing, and the Z590 illustrates just how much. Plenty of fast connectivity, an electric system that until recently belonged to flagships for NIS 2,500 and a neutral and elegant visual. This bracket, which is expected to be replaced by the end of the current year, becomes a difficult recommendation, but in case you need a particularly advanced motherboard for LGA1200's Intel For generation 11 or 10, a motherboard that will serve you faithfully. It's not that previous hardware will evaporate when a new one is launched, and who knows what prices and availability will look like in just a few months. Well done GIGABYTE.