Core i5 10600K Processor in Control: Intel's Need for HWzone

In this review, we focus on the performance of one of eminent emissaries Intel In the middle market, which is warming up and becoming ever more competitive because of it

This important day of Intel Continues the review that includes a processor that Intel wants to be popular with the gaming and multitasking world with a new mid-market processor that belongs to the series core Its the new i5 in the tenth generation.

A lot of the technical information about the 14th series and the history that has led us so far from the beginning of the XNUMX nm era can be found in the review core Our i9 10900K. In this review, we focus on mid-market processor performance core i5 10600K. 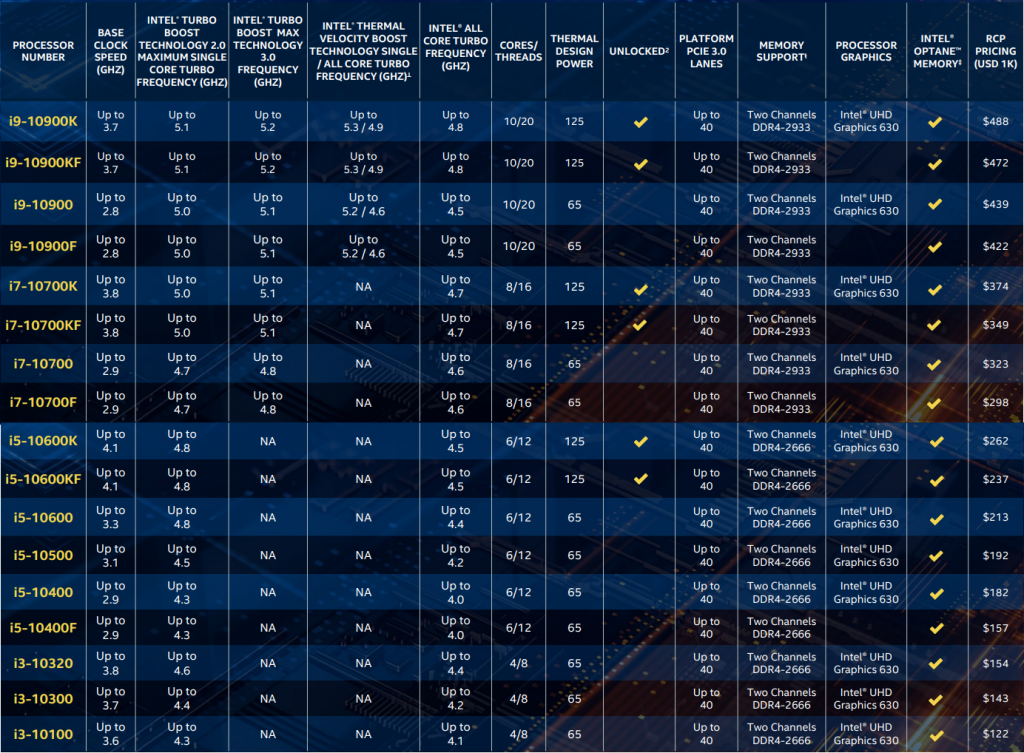 Series core i5 is the second of four series in the proposed processing power. All processors in this series come with a 6-core and 12-core processor thanks to HyperThreading technology that enables two processors to run on each physical core. God-core i5 10600K is the replacement of core i5 9600K which did not include this technology. As in previous generations, the meaning of K in the name is an open multiple and the ability to perform Overclocking The processor.

Like the other XNUMXth generation processors Intel, This processor also comes with a completely new, LGA1200. This means that motherboards that are already available today include chip sets such as Z490, H470, B460 and H410. Among them, the Z490 is the only one that allows Overclocking For K extension processors 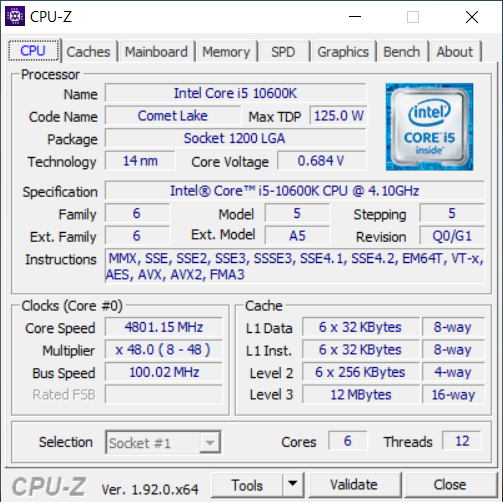 It is very important to know that as far as its price is concerned, the Core i5 10600K is in the sandwich between Ryzen 5 3600X and Ryzen 7 3700X when one costs $ 210 and the other costs $ 290 respectively. Since launching in July, the price of processors AMD The current has dropped significantly. 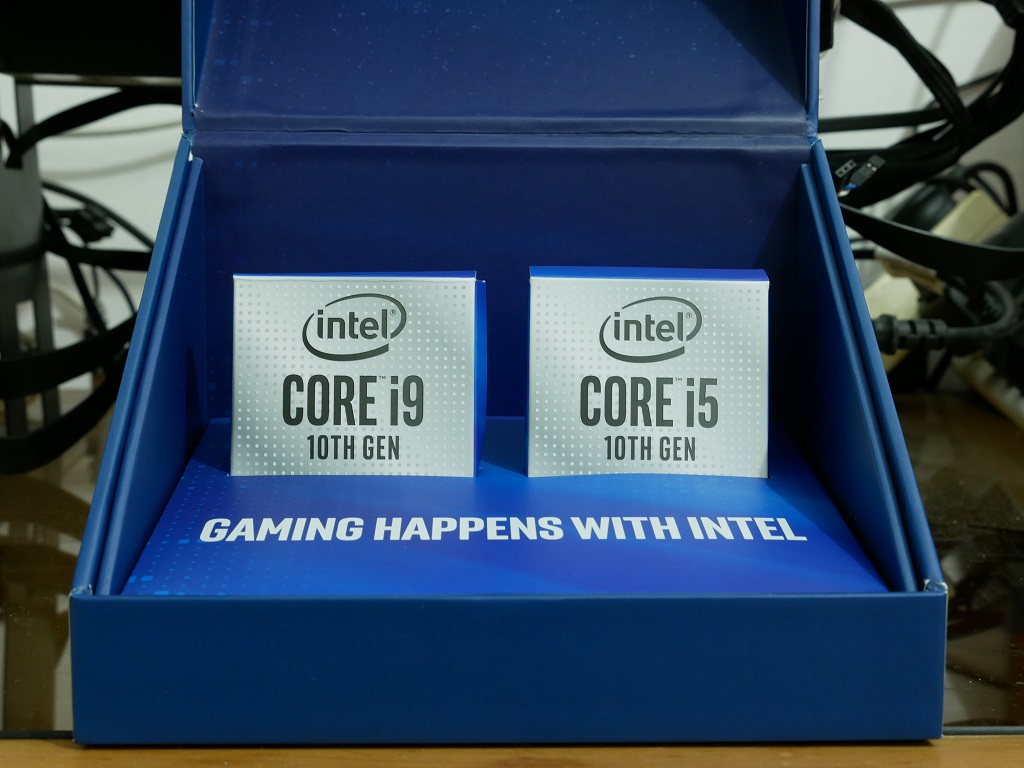 In the official review kit for Intel, She claims, "gaming is happening with Intel." In this review, we test the 10600K against the hottest processors on the market (sometimes the most literal ones) to see if adding HyperThreading technology and a little more frequency over the previous generation are enough to declare it as the new middle market king. It's time for the performance tests. 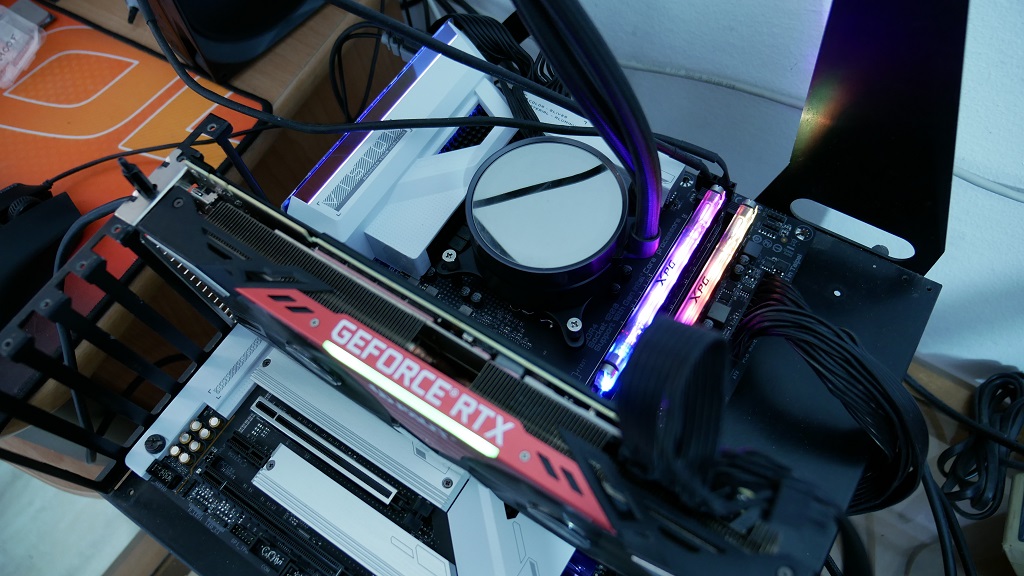 I decided to choose the RTX 2080 graphics card to form the basis of all gaming exams due to the fact that its given graphics power is similar to many advanced video cards currently on the market. Within the range of 20% of it is a series Radeon RX 5700 alongside RTX 2060 Super andRTX 2070 Super. Of course you can also considerRTX 2080 Super by comparison.

The goal is not to create a bottleneck as large as possible for processors, but to create a realistic state of the art computer system that will be purchased or upgraded this year or later. Exam resolutions are 1920 × 1080 and 2560 × 1440.

The graphs are going to be loaded with every possible processor we can test. Get ready. 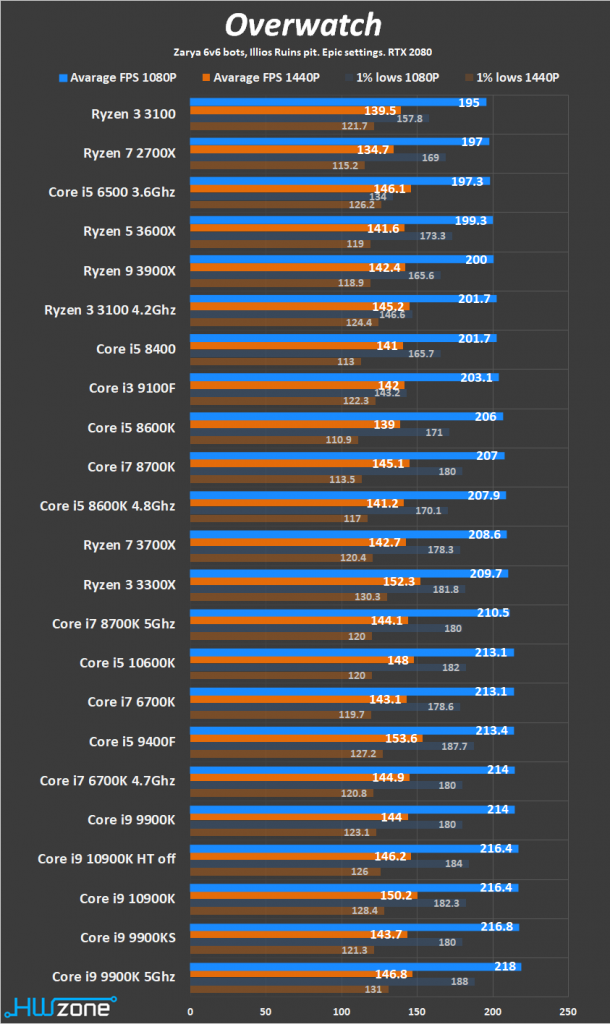 Let's start with the games. Blizzard's Overwatch is a game that can enjoy multiplayer cores, and high frequency is whipped from the top. In this title many high performance processors are from home Intel. The performance difference is not significant among the slowest and fastest processor on the list and stands at only 11.7%. You can say that on average 10600K is similar to 8700K in this title. 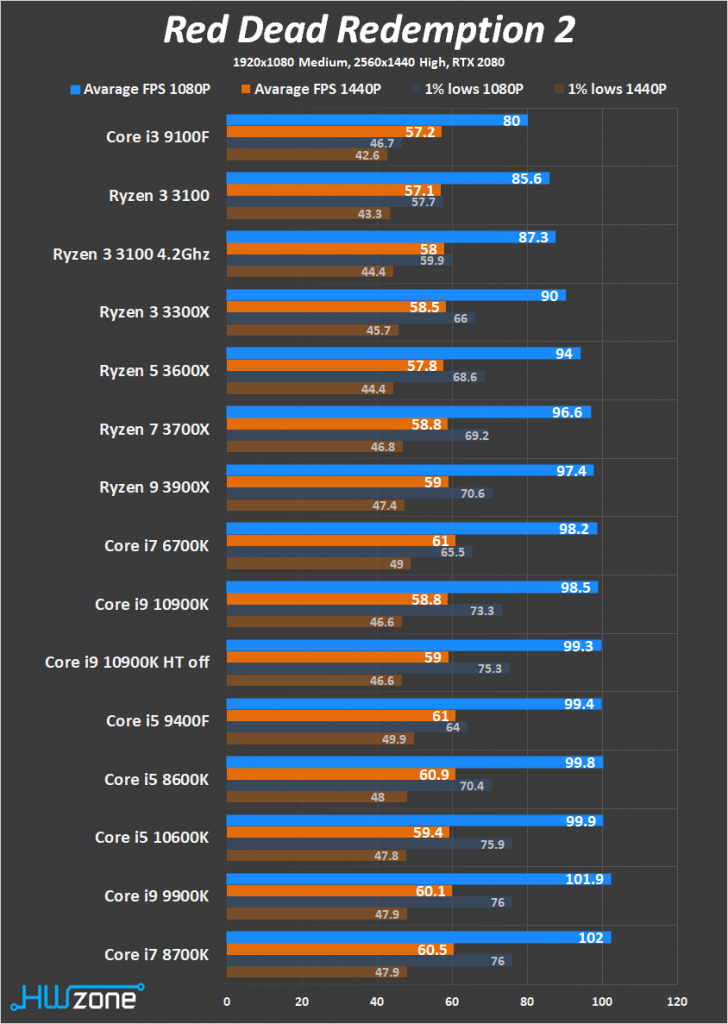 The Rockstar's fresh (PC) title from the Wild West also likes the blue side, or specifically the core speed over the number of cores, as long as the same number is higher than six. Here, the 10600 K convincingly leads to the number of frames per second it can produce over the 3600 X at 1080P resolution. However, as the load falls more toward the video card in higher settings, the difference is slightly reduced. The advantage remains with me Intel. 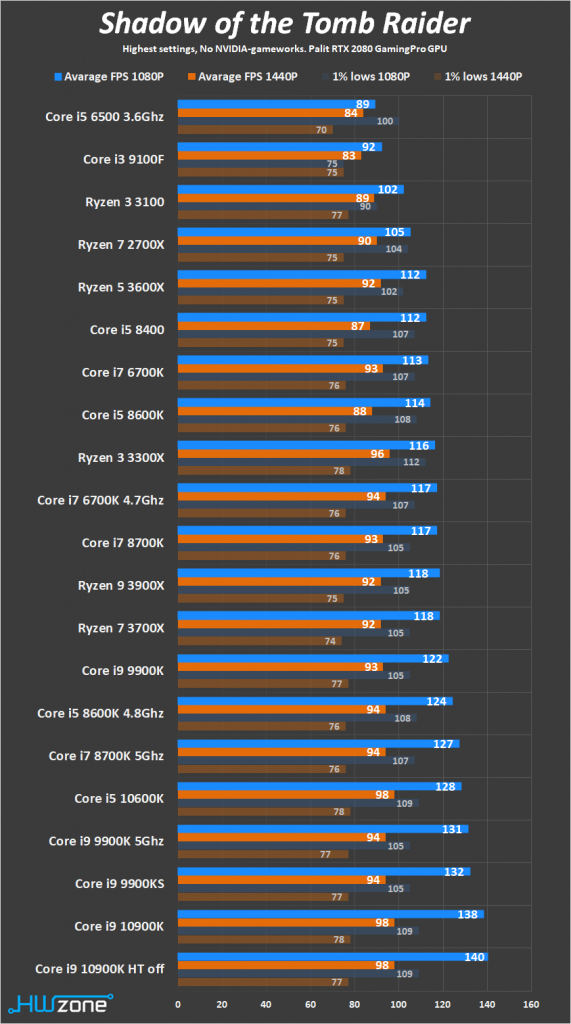 The Last Tomb Raider is another game that contains many elements that are nourished by the power of the main processor in the system. Here is the 10600 K behind his 8 and 10-core brothers. When the video card is the bottleneck in the situation (1440P mode), the advantage of Intel Significantly smaller. Still, it can be unequivocally argued that using such an advanced video card, the 10600K is the fastest among its price tag options. 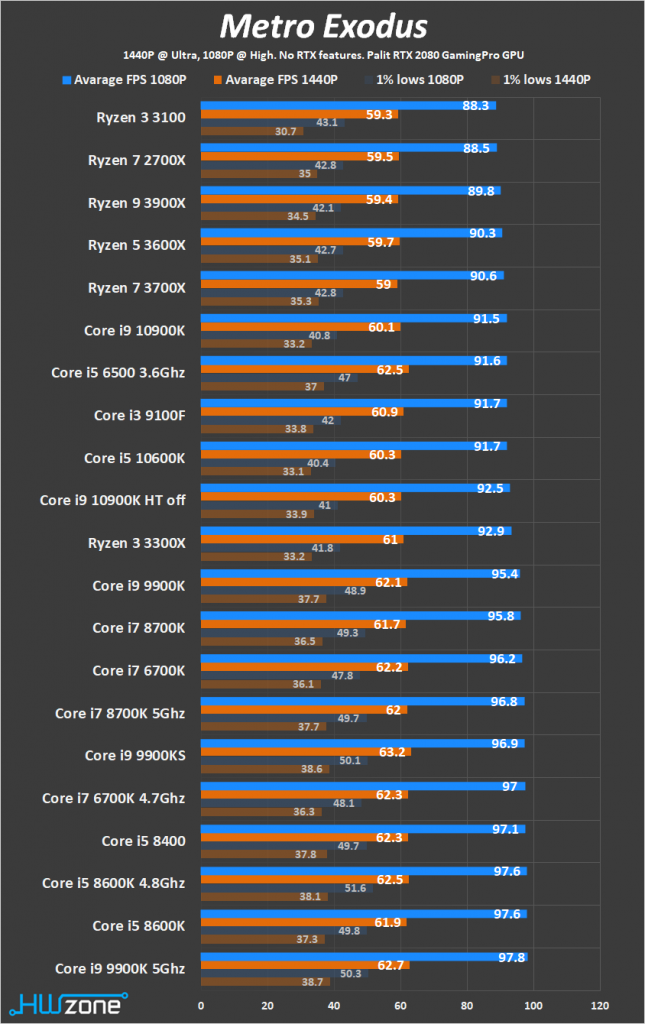 Metro Exodus is the heaviest among our game tests. Even with RTX 2080, the difference between the different processors offered today is relatively small, especially at 2560 × 1440 resolution when it is the bottleneck in the frame production process. When his work is eased, the ratio between the different processors in producing frames per second can be seen in this game. 10600K is located in a slightly odd place when also Processors Who are considered slower than he or she can get good results like him or him. 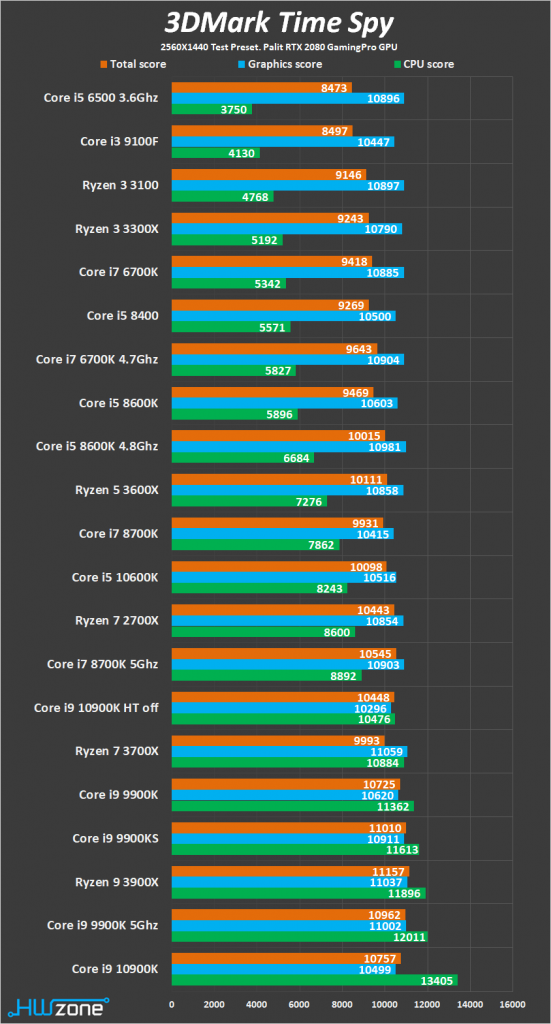 In the synthetic test 3DMark From the green bars you can see the processor scores when the 10900K is on top. The 10600 K is located a little behind the octagonal cores, quite naturally. 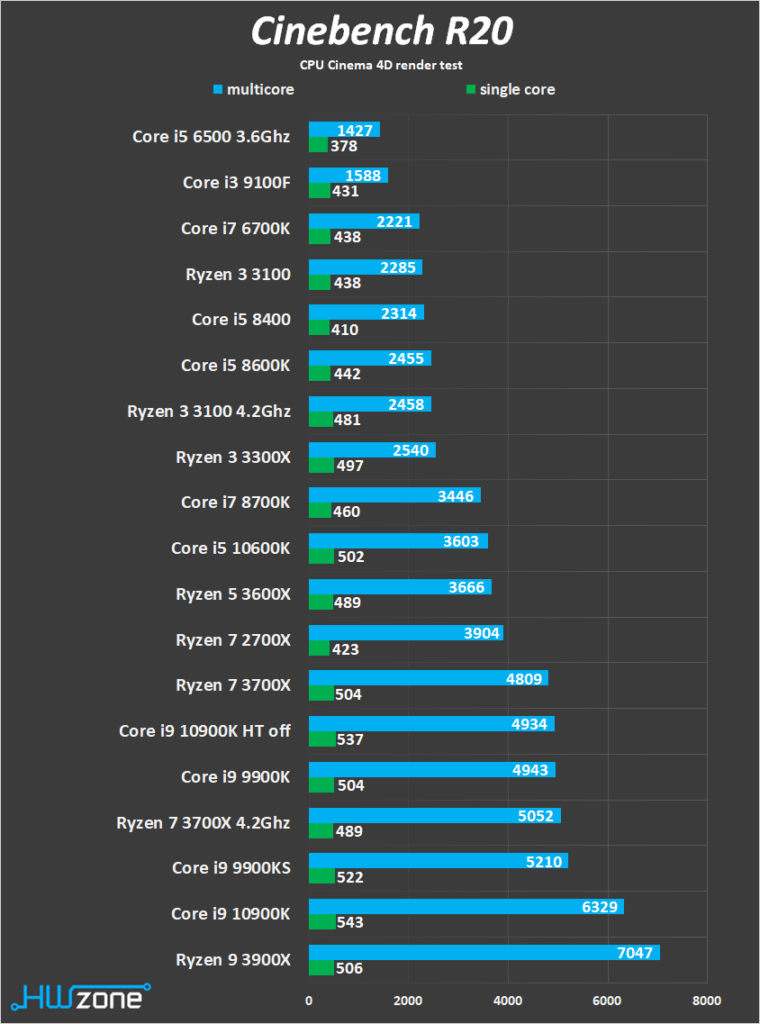 The Cinebench R20 Rendering Test mainly belongs toAMD When its processors in any market share manage to deliver great results. Depending on the composition and speed of the cores, the 10600 K is adjacent to the 3600 X in this test in a multi-core mode, leading to a slightly lower core score. An eight-core 3700X that is not significantly more expensive than 10600K K leads in a pretty significant way. 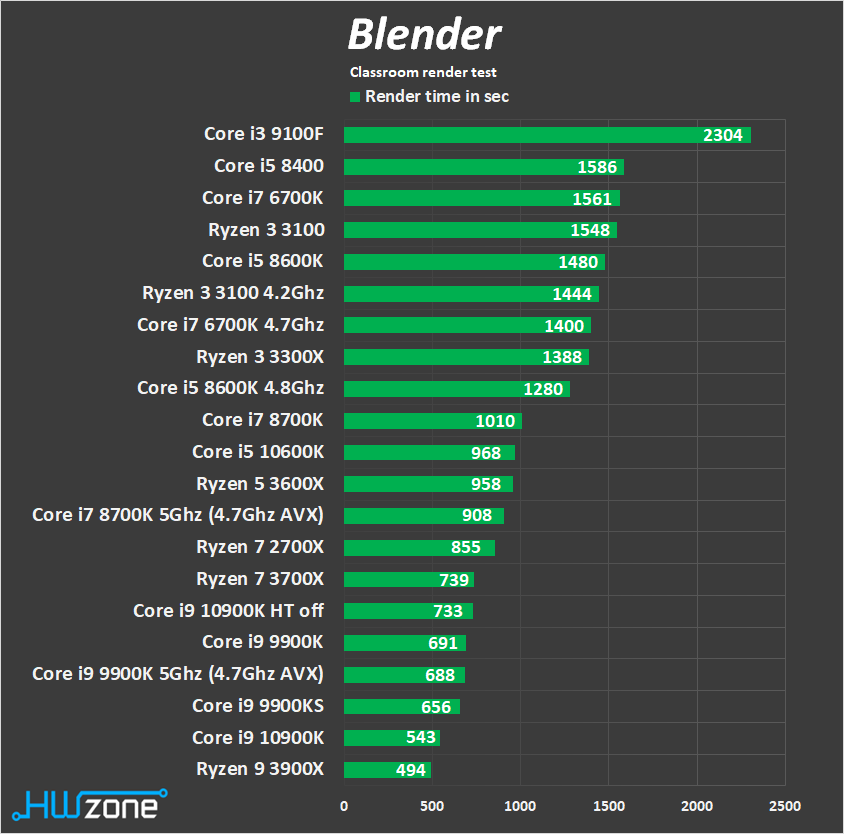 In the 3600D blender software, we measured the render times of the various processors in seconds on a complex scene. There is a tiny difference of 10600X in percentage of the hexagons over the 958K with 3700 seconds, with the 739X faster than both with a significant time of only XNUMX seconds. 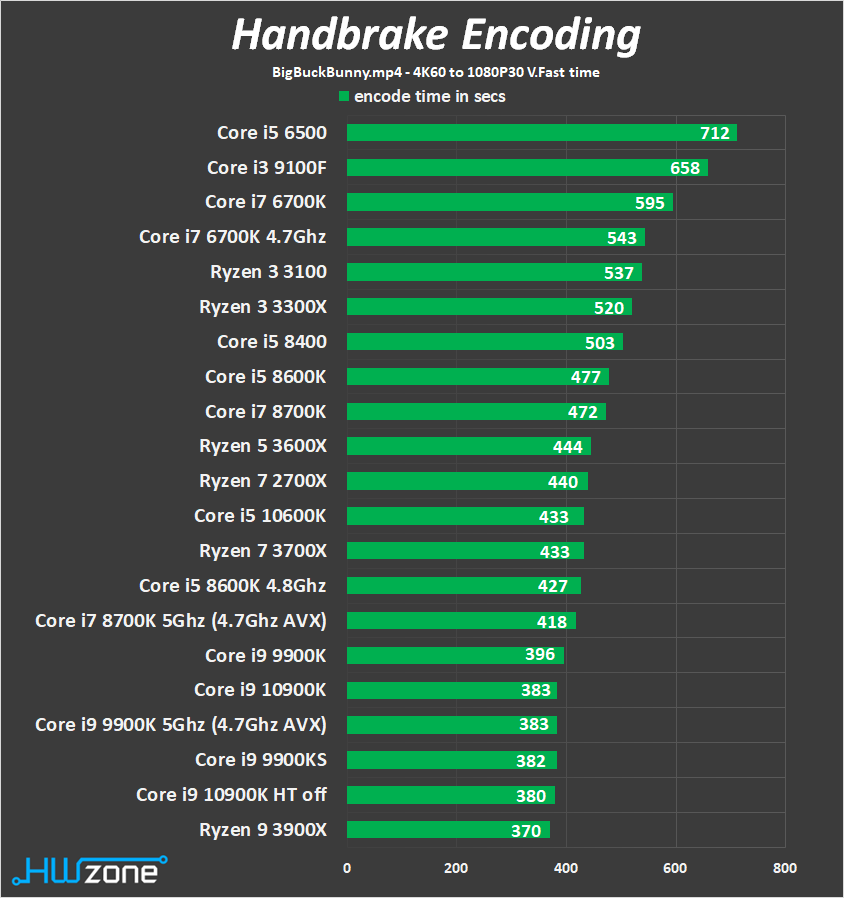 Free conversion handbrake software Video You can see that the processor is at a decent point and achieves a time equal to that of 3700X octagon cores. Frequency is important in this test, but so is the amount of cores. In this software, 10600K is the processor of choice at its price point.

We measured the test system power when the processor is in full effort. In this test, it is important to know whether different boards influence the outcome, but in general and prominently, Processors Higher power users will see this in the overall picture. 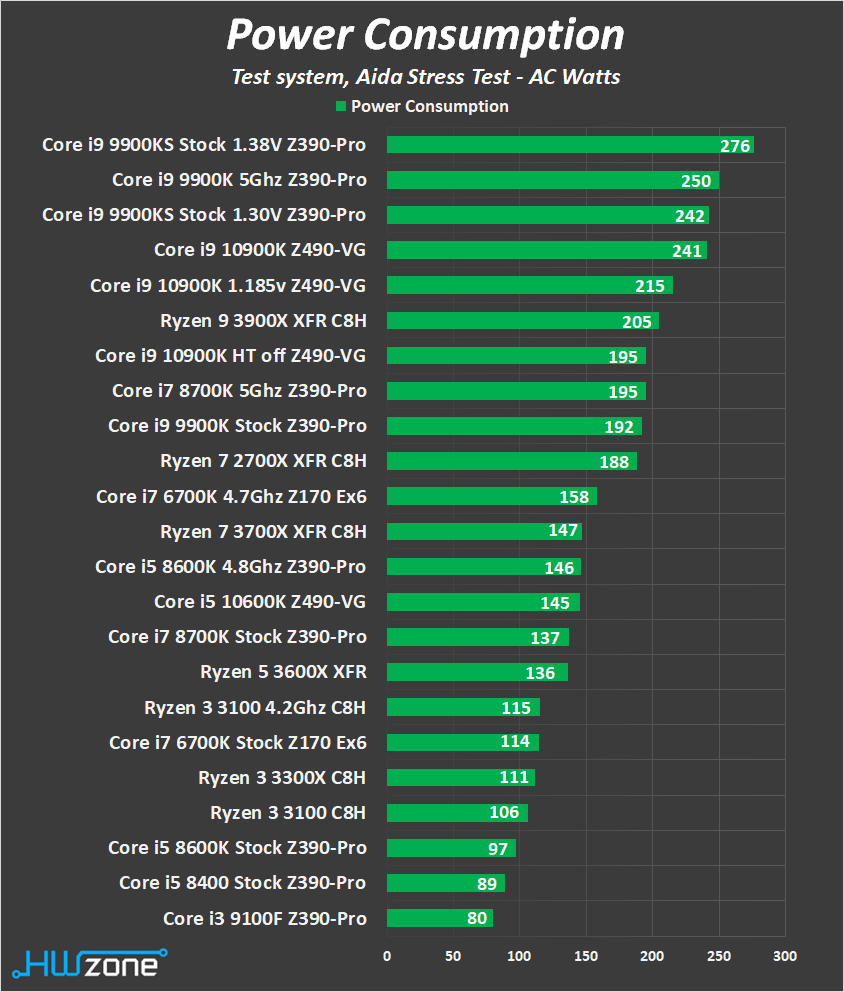 The 14 nm old production procedure gives its signals in the power data. The Core i5 10600K along with the Gigabyte Z490 VISION G motherboard regularly pulls 145W from the socket, with about 110W going directly to the processor's bracket. The test system's long-lasting power consumption is similar to that of the 3700X processor. In fact, due to the relatively high power consumption I know there is on the motherboard AMD, The actual power consumption for processors is even more advantageous AMD. 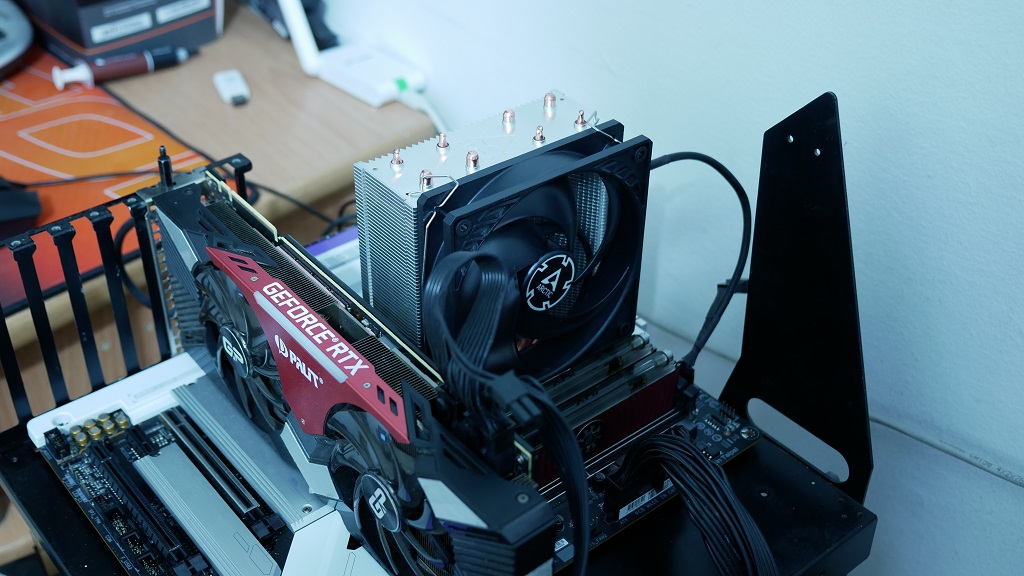 The top of the table is colored in processors Intel When power consumption of Processors Multicore reaches new heights. Worrying, but as we showed in the 10900K review, not "un-refrigerated". The 175th-generation thermal solution shows it's beyond gimmicky. Mid-market cooling (NIS 200-XNUMX) will be enough to keep the processor the same core i5 10600K at normal working temperatures in an effort in most situations. 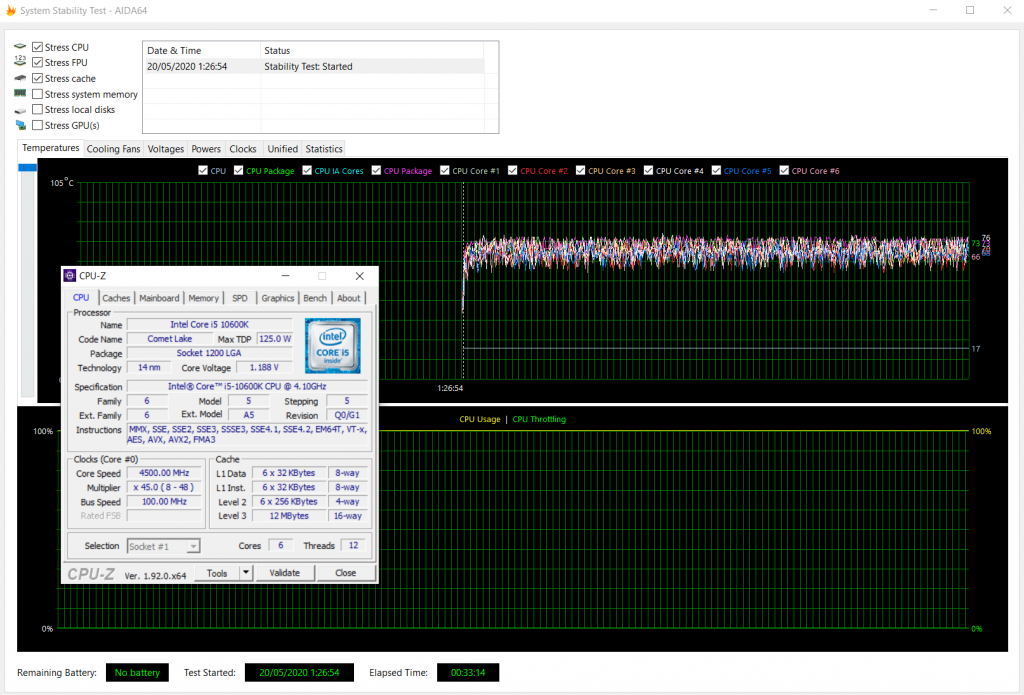 For results, I used very standard cooling on the 10600K which costs about NIS 150 to paint a picture of the new thermal solution Intel. With no interference on my part and default settings that include a working frequency of 4.5Ghz for all CPU cores in an effort, the core temperature in the region was very low and not at all problematic. This is when the ambient temperature is 30 ° C and the fan remains below 50% rpm. It is not difficult to cool the 10600 K, and exotic cooling is not necessary.

Summary - There is an improvement over the previous generation only…

Tenth Generation Intel Includes a very important feature to the series core i5, multi-capillary using HyperThreading. This is a feature that these processors were very thirsty for. Given the performance results we see today for a processor like 10600K, the question arises - is this a feature that comes one generation too late? What would happen if, in the previous generation, we would receive a processor with such processing power for such a price?

Well, if you average your gaming and productivity performance on average, thecore The i5 10600K and the Ryzen 5 3600X are "fit". Their performance difference is on average quite small, and the choice of each should depend largely on the considerations of Performence Specific in one app or another, or "gaming" in general, where the 10600 K is expected to lead slightly.

Admittedly, the major barrier between potential buyers and the 10600K will remain the price. The difference between $ 40 and $ 70 to Intel's processor is just the beginning. On that, you have to add the difference between motherboard prices, if you want a difference between board and overclocking AMD The B450 \ B550 and the Intel Z490 can also reach hundreds of dollars. In addition, the 10600 K comes without refrigeration in the packaging, which forces the consumer to add a few tens of shekels at a minimum. To add oil to the fire, process the eight-core processor AMD sample RYZEN 7 3700X gets frequent discounts and comes very close to the price level of the 10600 K.

Due to the old production process, and the introduction of a new resident ready toPCI-Express Generation 4.0 but don't get it yet, in our opinion it is a significantly cheaper price for processors like this one that should have been a mass user migration trigger so they can launch the next generation for the same resident and get many upgrades. An ecosystem is something that needs to be built. The relatively high prices for competition when it comes to the purchases a user has to make when buying a new computer make it difficult to decide to buy blue this time. 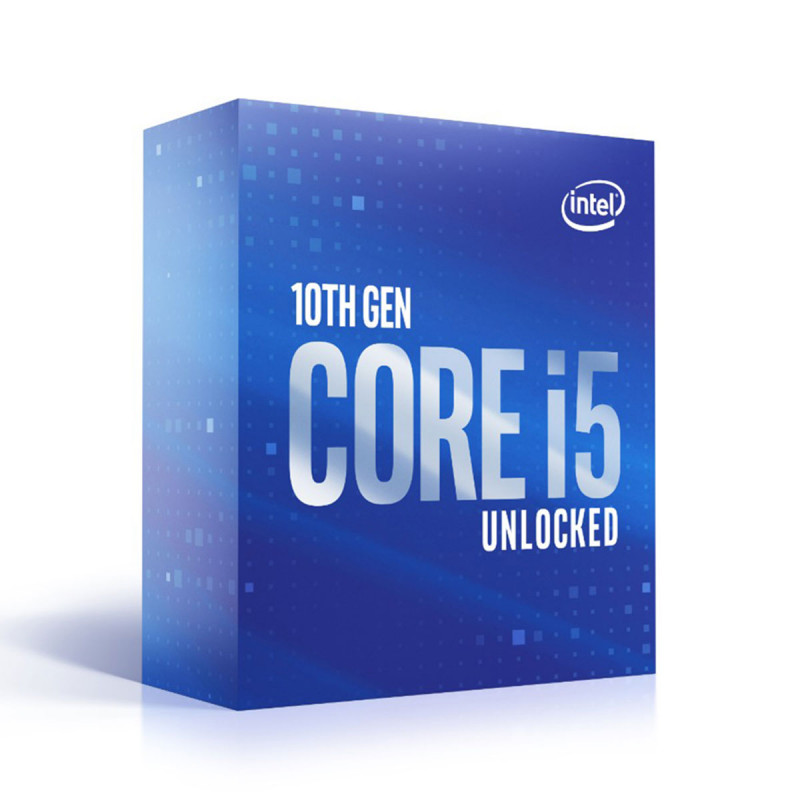 The simplest way to describe thecore The i5 10600K is the "Core i7 8700K with a little overclock for a new bracket". It is a fairly fast processor and there are no actions that it performs slowly, at all. The high price compared to the competition when the technology is a bit old is the case that Intel must solve, and maybe at some point you decide to do it. Until then, we recommend users do as much research as possible to make sure thatcore The i5 10600K is indeed the processor of choice for them. There are actions that he is operation Fantastic compared to the competition, and it's important to recognize them and make sure they are the actions the user really needs.

The price of entry to the platform LGA1200 With the 10600 K similar to the existing price for the advanced B450 board and octagon 3700X core processor and this should be kept in mind. The performance tests and the cost of adoption per user speak for themselves, and we hope our readers will make the right decision according to their needs.