In this review we will focus on the latest Core i7 performance of Intel Just launched. Is a model heir in honor of a long line of Processors Successful and popular?

Yesterday we got to see Performance review of Intel's 11th generation Core processors, A generation that has just been launched and is available for purchase. This review also included technical explanations of the architecture and history of Intel So far with a 14 nm procedure.

We save this review mainly to focus on the performance of another processor in the series - Core i7 11700K.

While the Core i9 11900K processor gets a lot of attention as it is the most advanced among the new processors of Intel, God-Core The i7 11700K is a small brother to this processor, with the same hardware and a significantly lower price tag.

This processor comes to us from Intel when for the first time in the history of reviews on the site, it comes without any caption at all. We assume that this is what the processors look like in parallel to those marketed in stores (known as the Engineering Sample for Media). Still, we will love it like any other processor with a caption between its brethren :). 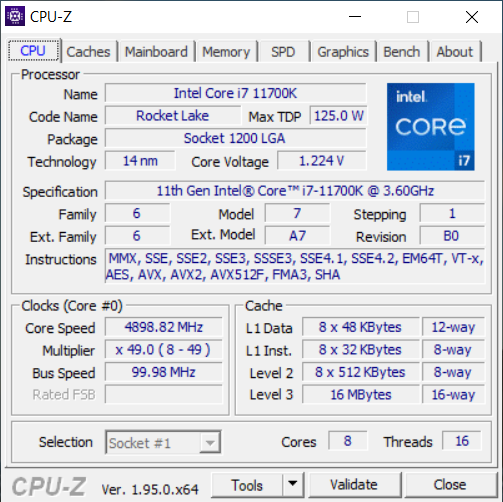 God-Core i7 11700K does not contain the same ABT technology and therefore its maximum frequency without The fast Manually lower at 300 MHz than that of the i9 11900K. The heat envelope of this processor is officially 125W, but the power consumption will be tested according to our test method.

The current market price of Core i9 11900K as of this writing is about NIS 2,650. The price of Core i7 11700K is about 2,000 shekels. Are those 650 shekels worth the extra frequency? This is mainly the answer that this critique comes to answer.

Without adding unnecessary words and information that already exists in the review we published yesterday, he approached the exam system and performance tests. 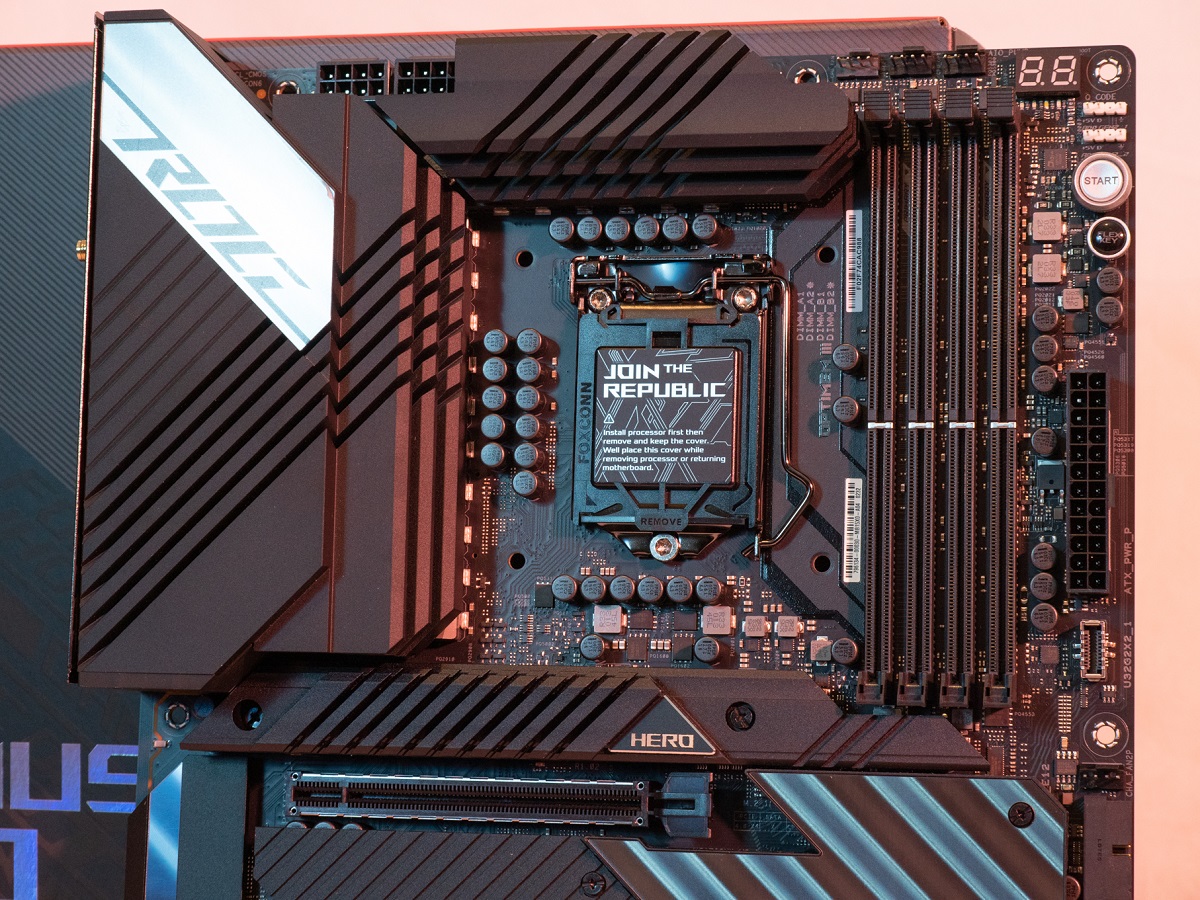 As in exams Processors Others, here too we use three different resolutions with our video card to see how the behavior changes when the CPU dependency changes. Apologies in advance for the amount of times we have had to repeat that performance Core i7 11700K just too similar to those of Core i9 11900K.

Our testing philosophy is to use titles most of which are relatively graphically heavy, unlike tests Processors Many that usually include particularly light games such as Valorant or CS: GO. The purpose of our tests is to represent a situation where the CPU is part of an advanced system for graphically heavy games. 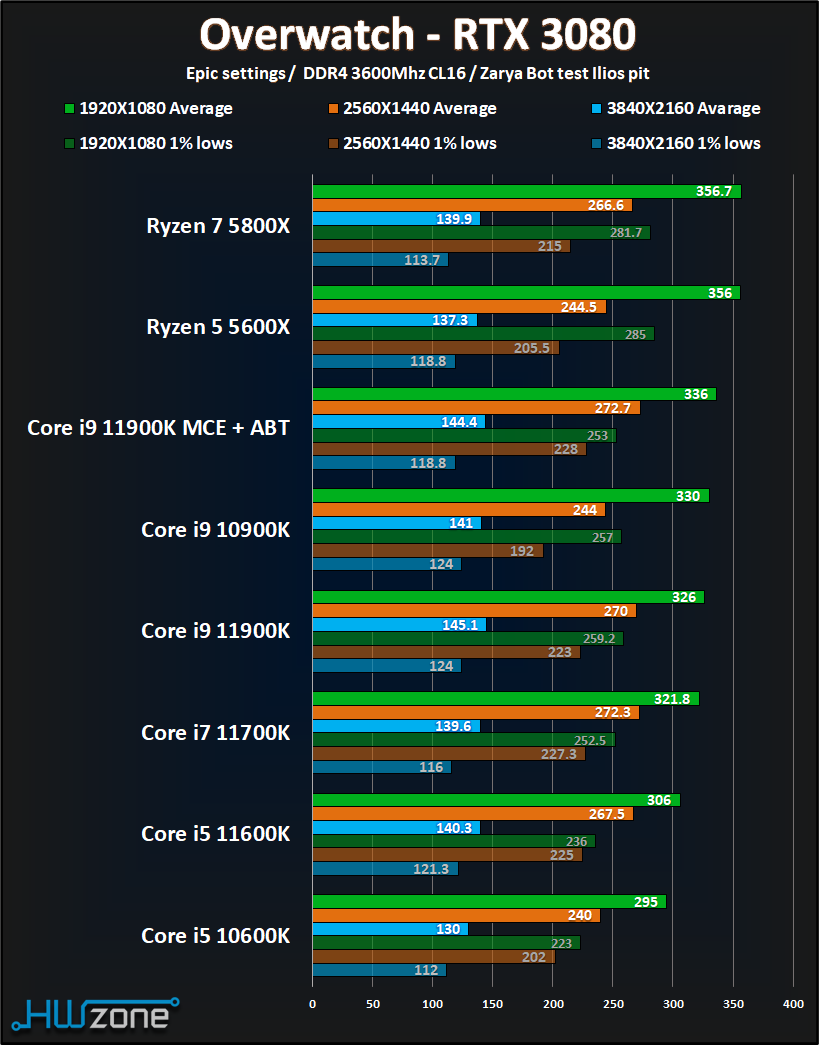 Currently, processors RYZEN The 5000 series are still the champions of frames per second in the game Overwatch with the bottleneck resting on the CPU. At 1440P resolution the lead goes to 11th generation processors with 11700K performance identical to those of 11900K. 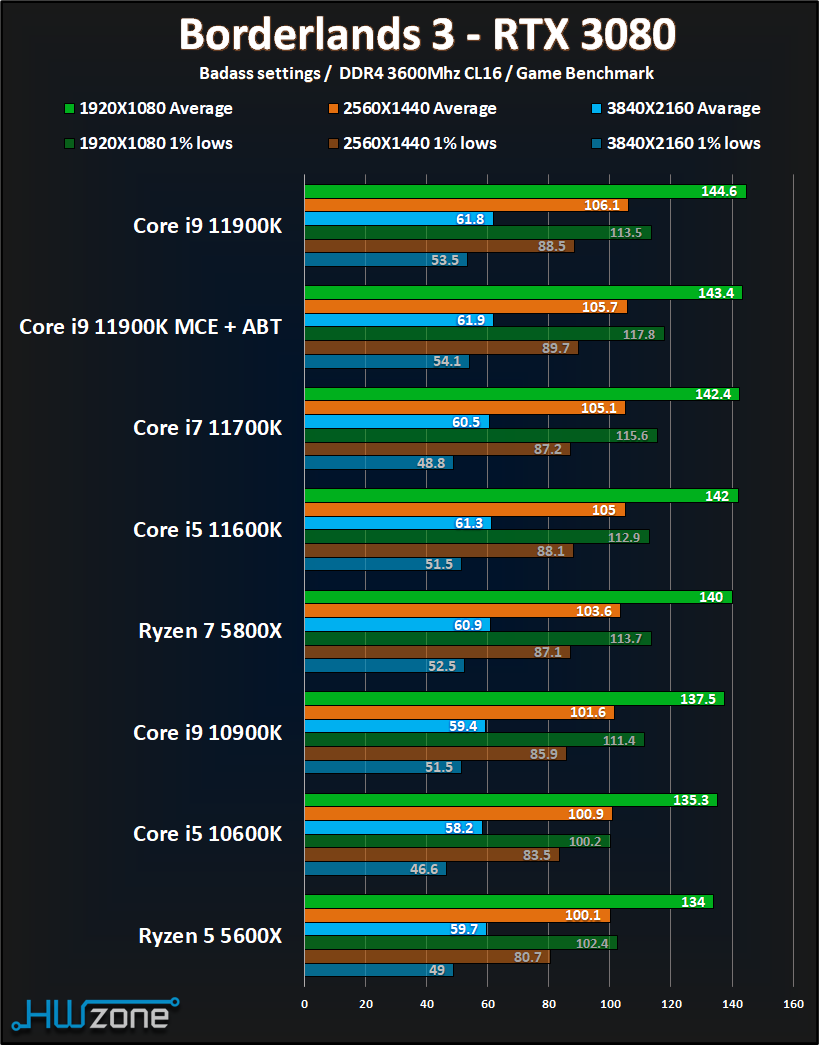 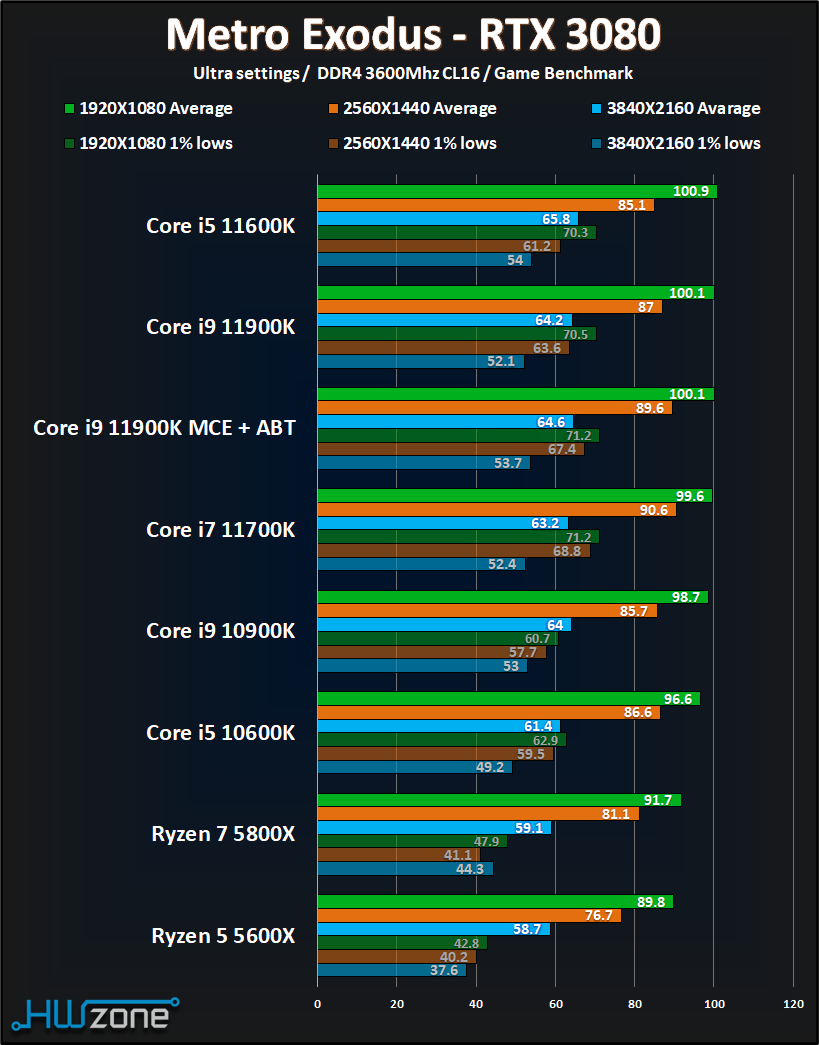 The Metro Exodus game is very graphically heavy even at 1080P resolution with mediocre settings. Although, you can see significant differences in performance at the bottom of the table in this resolution, especially with the minimum amount of frames per second. Processors Rocket Lake S are the fastest in this game by a respectable margin. 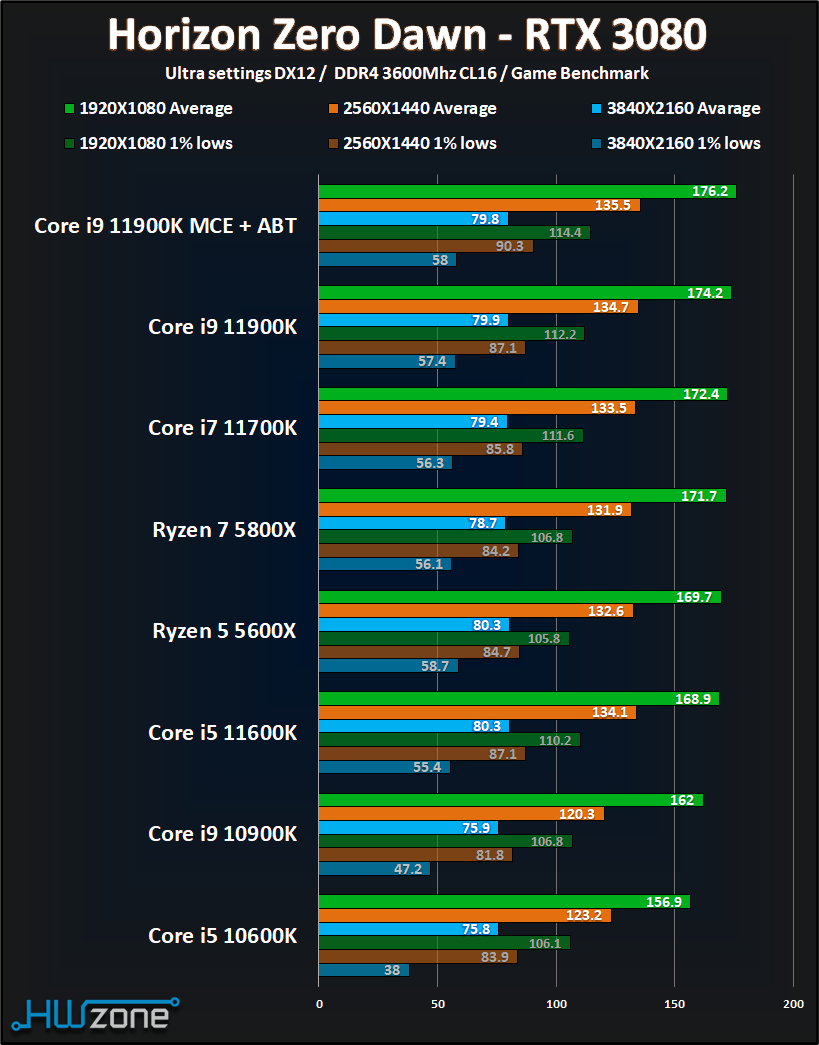 Also in the game Horizon Zero Dawn, the performance of theCore i7 11700K next to those of the 11900K from below. Admittedly, even with a single performance percentage difference over 5800X, the 11700K gets a faster read in this title. 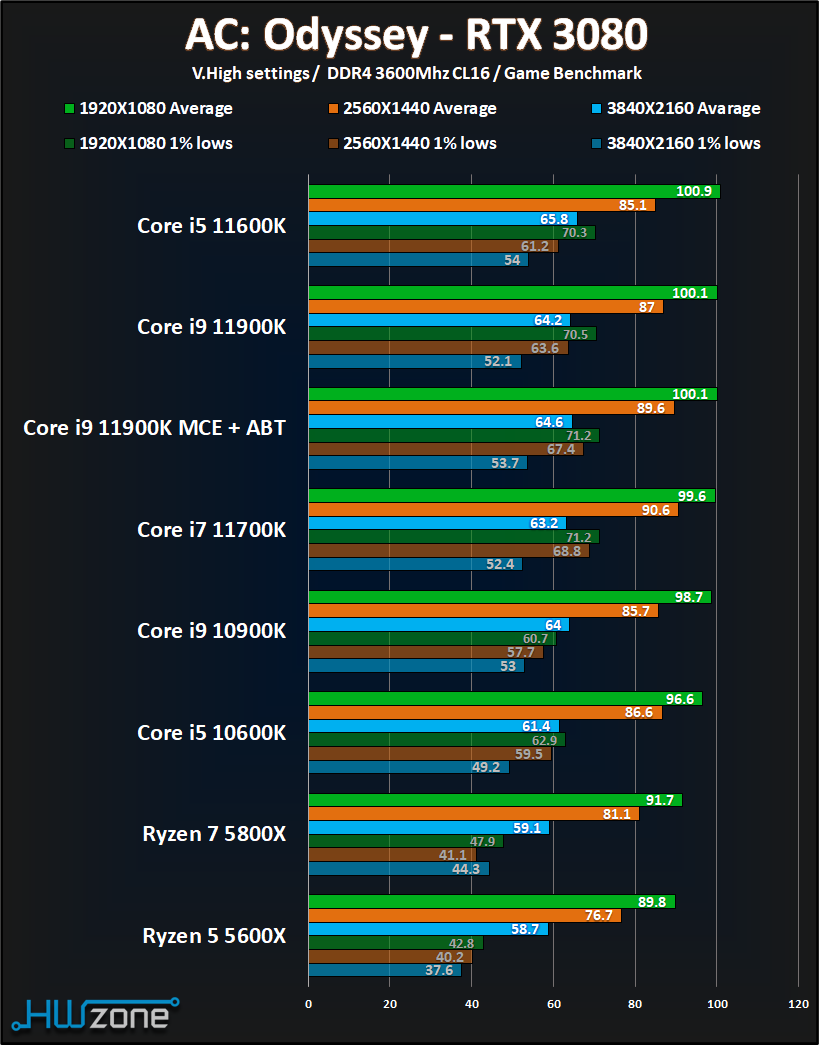 Assassin's Creed Odyssey also sees that the 11700K is close to identical to the 11900K performance. 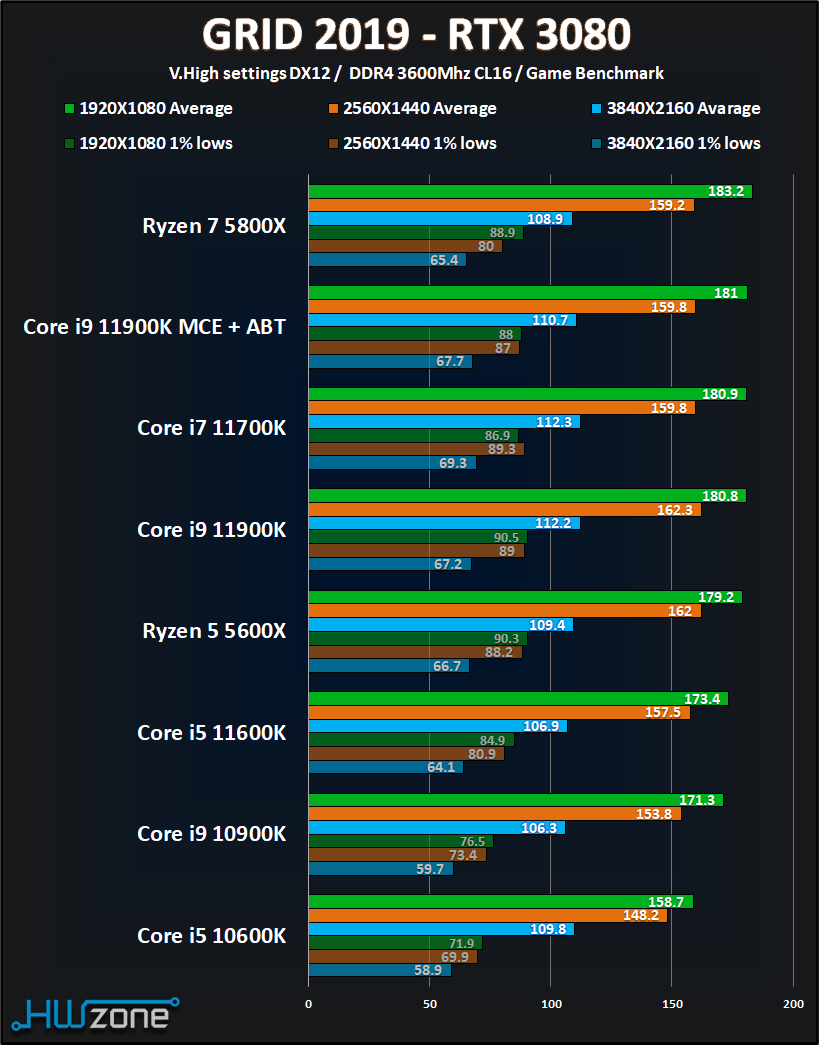 The GRID racing game is not picky, and loves its processors as well AMD The new ones and also those of Intel. The 11700K leads the 4K performance. The highest amount of frames per second regardless of the video card belongs here to the 5800 X of AMD. 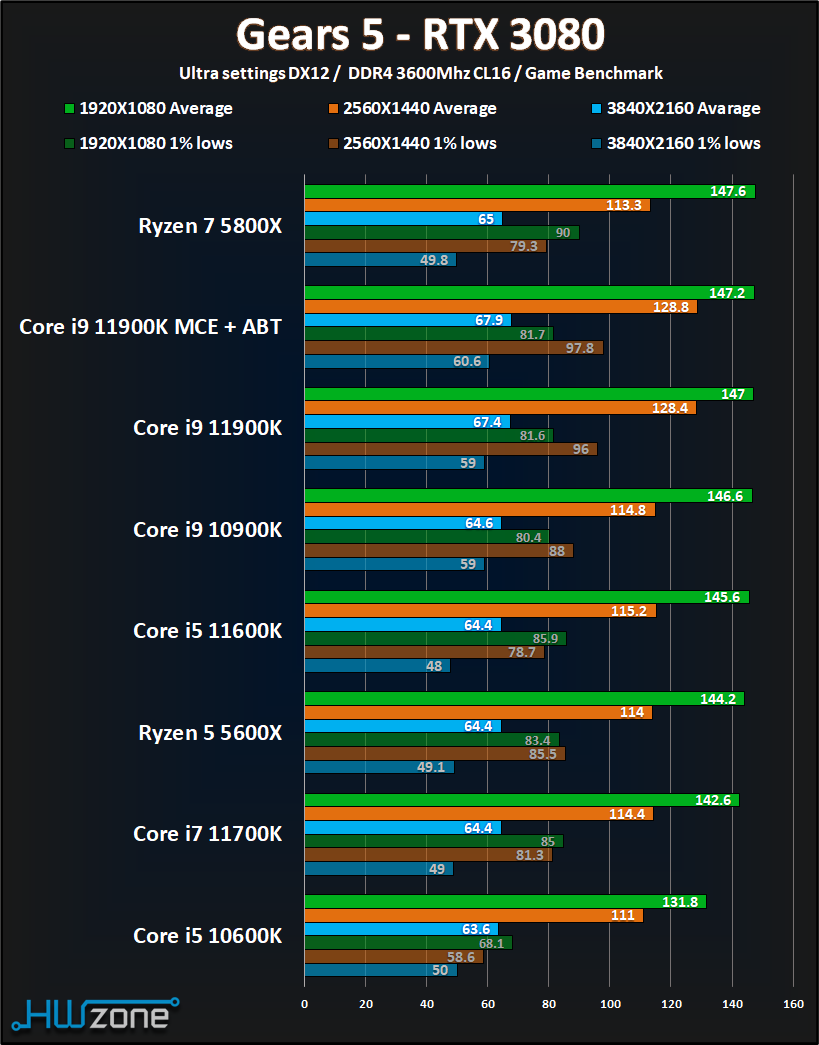 In the Gears 5 game, the number of frames per second in the capacity belongs to 5800X among the processors tested. The highest 1440P performance was measured with 11900K thanks to the high operating frequency. Here, 11700K is found to be identical to the processors AMD At 1440P but slightly behind at 1080P. 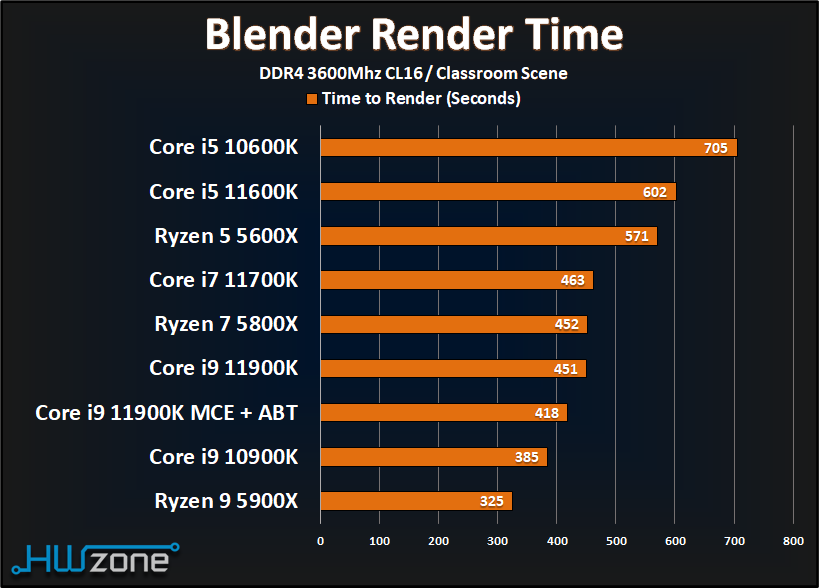 The rendering times in the 11700K Blender software are reasonable, but slightly slower than those of the 5800X. Ryzen's processors AMD Especially in the 5000 series are productivity and rendering experts. 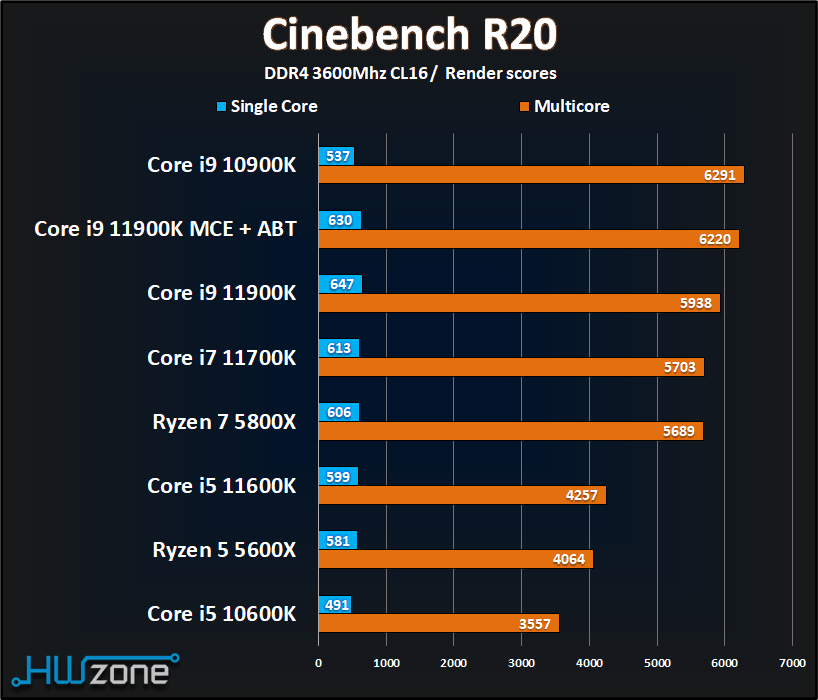 Summary - Finding the Target Audience of Core i7 11700K

We will begin the summary with the facts on the ground, at least with our test equipment and results. Performance difference between Core i7 11700K and Core i9 11900K It is negligible. This is a premium of 650 shekels, which is mainly expressed in the title of "processor owner Core i9 ". Of course it is important to also consider the elephant in the room, as there is an important specific processor that is not present between the various performance tests and is the predecessor of the 11700K, the 10700K. Technically, it will be possible to place this processor exactly between 10600K and 10900K to know where it stands Quite accurately.

A processor such as the 10700K or 10700KF without the graphics core are Processors Cheap, very cheap even. The fastest among users could recently snatch them for only NIS 1,200 in light of specials in stores such as Amazon, or for NIS 1,350 on less successful days. Of course it will be a product with a huge value compared to 11700K but this is the nature of a technological market when a new and slightly more advanced product is released to the world (as of this writing a processor Core i7 10700KF to your home will cost about 1,280 shekels from there).

The results of the performance tests tell us what could have happened descriptively compared to what is actually happening. Theoretically, the Core i9 brand could have rested in the Rocket Lake S generation entirely, with the Core i7 11700K leading the list in the same price tag while the emphasis remained on gaming and eight cores remained the maximum number possible. In practice, she decided Intel Because it takes into account acceleration technology which improves the performance of the processor minimally in order to market processors Core i9 which is hardware-identical and completely identical to my processors Core i7.

As a choice of advanced gaming processor, we have not too bad to say about the Core i7 11700K simply because objectively it is a fairly powerful processor with better architecture than what we saw in generation 10. Its direct competitor is the Ryzen 7 5800X with eight cores of AMD. Do we see here some convincing and significant victory in the gaming of Intel Across AMD? Not so. Technically it can be said that there are titles in which lead Intel Obviously, but it never happens in a dramatic way that will change the actual user experience.

When both products are priced similarly to the user, no choice will actually be bad for them. For him, this is mainly a line alignment with processing capabilities up to eight cores, which is a fair fight in front AMD Up to a certain market share. The problem is that it comes in a big delay after AMD, Instead of a situation where Intel needs to precede a generation of AMD In gaming capabilities. Over eight cores we know thatAMD Controls absolute dominance for multi-core processing tasks. It's no secret to our readers, and we hope (but still are not sure) that it is so too Intel.

Intel's refreshed platform in the form of the B560, H570 or Z590 can offer advanced connectivity but does not change fates however on the X4 based AM570 boards on the side of AMD, And these have been around since 2019. These two platforms are now experiencing the very latest architecture supported by them until the arrival of a new resident. In advanced connectivity we mainly mean 20Gbps USB and Thunderbolt 4 as more common standards on platforms Intel As well as improved Wifi 6E.

Those looking for the fastest 8-core processor for gaming up to NIS 2,000, will find it in the form of Ryzen 7 5800X or Core i7 11700K mainly depending on the game and the situation. Beyond that we know that processors of the tenth generation of Intel The price has dropped a lot recently, so they too are still a completely relevant option for users. Another option remains theCore i9 10850K for example, which while its gaming performance will be close to that of the 11700K or 5800X with added value for rendering and virtual machines due to being a 10-core processor.

In order to make a Core i7 11700K processor more accessible and in demand among users - Intel Need to rethink pricing and market access. Although this is not expected to happen, this processor needs to shed a few hundred shekels from its price in order to become more recommended. Now, Rocket Lake S seems to be creating for being a transit station, or a way to mark V on the launch of a next-generation LGA1200 chassis. Power consumption is very high as a result of having to use extreme working frequencies and the whole story feels very awkward. The answer to the question of the existence of 11th generation of Intel Probably mostly housed in cheaper processors for example Core i5 or 11600K Core i5 11400F.