Core i9-10980XE processor with 18 cores in review: Intel's premium goes down to the people • HWzone

A leading Extreme processor is now officially achievable for a wider audience of users - is a third launch of the same processor a proper step? The answer inside

Today launches Intel Officially new processors for its Extreme Resident, the LGA2066. This is the first time in the history of Intel Where it launches a new series for the third time to the same Extreme resident and the big news is that the prices of processors have dropped significantly.

Admittedly, one must know and know what is really happening in the market to understand why such a move is happening for the first time. When the Core-X 7000 series was launched, The first series for the LGA2066 resident, featured processors with high-processing cores that represented a significant leap for Intel. If we knew Extreme as 10 cores, 18 cores are something we haven't heard of.

At the price tag of two thousand dollars the leading processor core i9 7980XE was a long way from being accessible, and even its smaller, smaller-core siblings weren't exactly easy to get. The difference in prices between mainstream and extreme resident processors was simply great. Those who choose to go for Extreme Processors usually stick to the cheaper options with 8 to 12 cores.

Last year a new processor series was launched for the same resident, Core-X 9000 When the Core i9 9980XE headed it. Prices remain the same, even though competition is only getting stronger AMD With its Threadripper processors. God-core i9 9980XE The language that we saw in the review we did at the time, is actually a processor core i9 7980XE that gets better thermal resolution, and slightly higher operating frequencies.

Today the Core i9 9980XE is officially launched again, under the name Core i9 10980XE and with it another complete series of Processors - Everyone is under generation core-X 10th Gen, Tenth Generation of core. Physically, the chip is exactly the same chip. Same thermal solution, same silicone under cover with the same 18 cores. The processors are also suitable for all chipset-based motherboards X299 Launched so far.

These processors are called Cascade-Lake X. They are actually a refresh of Skylake-X and are made in the same 14 nm process of Intel. Apparently, these are the latest processors to launch Intel To its 14 nm external platforms.

The operation frequencies were slightly improved in the new model. The base frequency for both is exactly 3Ghz. While the turbo frequency for 9980XE is 4.4Ghz, that of the 10980XE is 4.6Ghz. The 24.75MB processor has a cache memory and an 165 watt heat sink. Memory Frequency Support DDR4 Enhanced from 2666Mhz to 2933Mhz Although it is important for memory, these processors are easily coped with significantly higher memory speeds. Another addition worth noting is another 4 PCI-Express 3.0 paths that the new processors receive. This is manifested in new with mostly boards with the M.2 interface for drives SSD.

There is one difference between the two processors that makes the new one more worthwhile - the price of the new flagship Intel Goes down from two thousand dollars to a thousand "only". This is the price tag that we were used to seeing the most expensive Extreme processors a generation ago core-X 7000.

A very interesting situation is happening here in the Extreme Processors market, when Sandwich was actually created between Intel andAMD At prices. X299 becomes an extremely accessible and affordable platform for both motherboards and processors. Above them in a large premium is already found AMD. 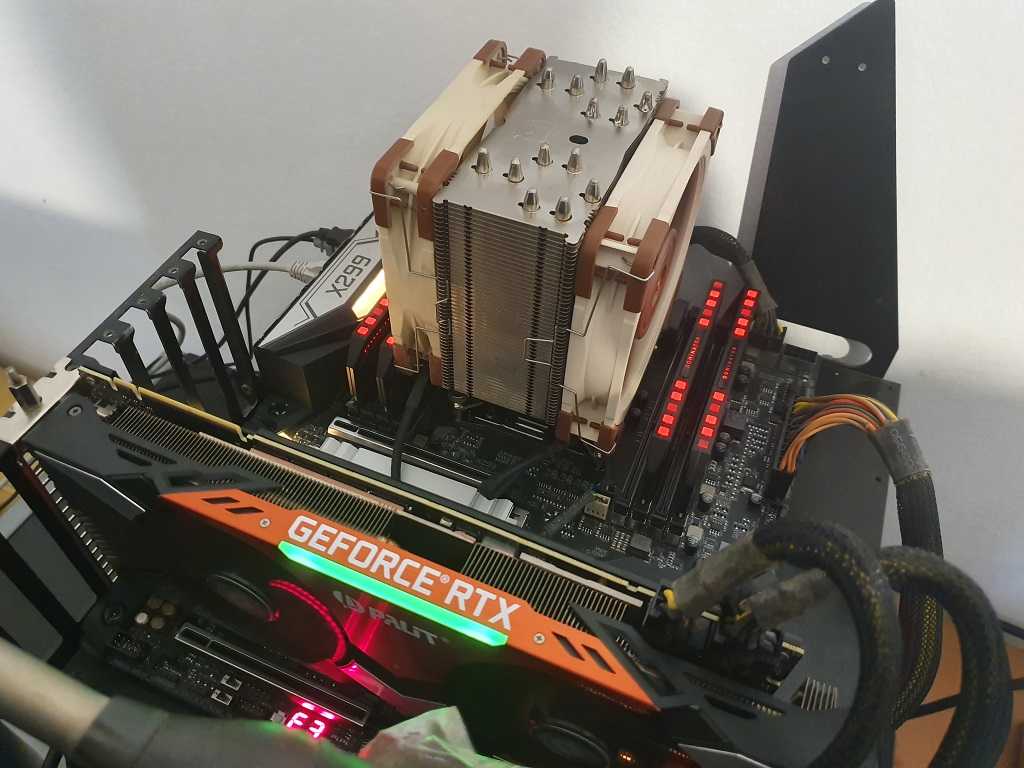 Of course it is also important for us to put the processor in the exam system and see what differences we can get after two years of existing product update. When it comes to dealing with CPU heat, it is important to understand that despite the high power consumption, the Processors Example core i9 9900K, thecore i9 10980XE is relatively easy to cool. This is due to a significantly larger heat emission area, the heat less concentrated and easier to absorb with a body Cooling.

We used sample air cooling Noctua NH-U12A And working temperatures during maximum effort are not at all high, the 75 area remained for all processing cores under 25 degree ambient temperature. This left enough room to even perform overclocking tocore Our i9 10980XE.

While the operation frequency for all cores under extended effort is 3.8Ghz, under 1.10V working voltage alone we were able to bring the processor to an operating frequency of 4.3Ghz for all cores. For me this is a "gift" as the increase in power consumption for this frequency is relatively low and our air cooling worked out with the processor without any problem at all. Therefore, the processor is also tested with Overclocking The gift he brought us. The core temperature during full effort in this situation was about 85 degrees Celsius, the cooling fans operated at 50% of maximum rpm.

Our exam system includes a Gigabyte X299 Aorus Master motherboard. The memory set for all processors is Corsair Dominator Platinum 3200Mhz CL14. 4 Channel Configuration onX299 And 2 channels in the rest.

Ryzen 9 3950X's AMD Not yet reached us and therefore not included in the exams, as well as the new Threadripper processors launched today, Processors Hello will come to us later and the test results will be updated accordingly. 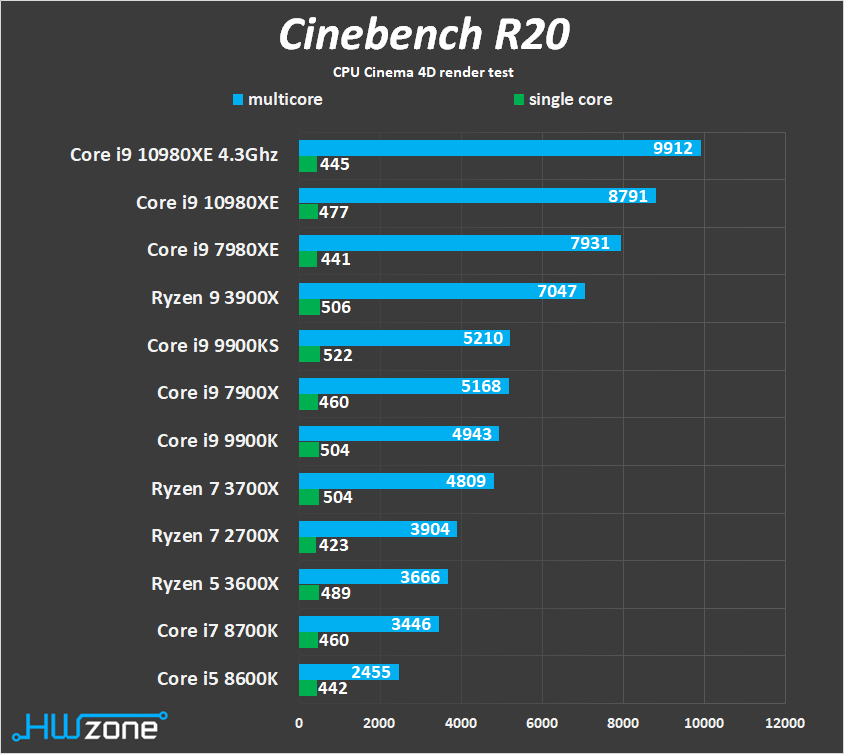 In the Cibenech R20 test based on the Cinema4D rendering engine, we got a near 10,000 score for the processor which is not bad at all due to the fact that it is cooled with a body Cooling Relatively compact. Admittedly, Cinema4D is not exactly a test to be especially proud of if a processor at half price (3900X, about $ 500) comes relatively close to the Extreme level. Still, a bad result. 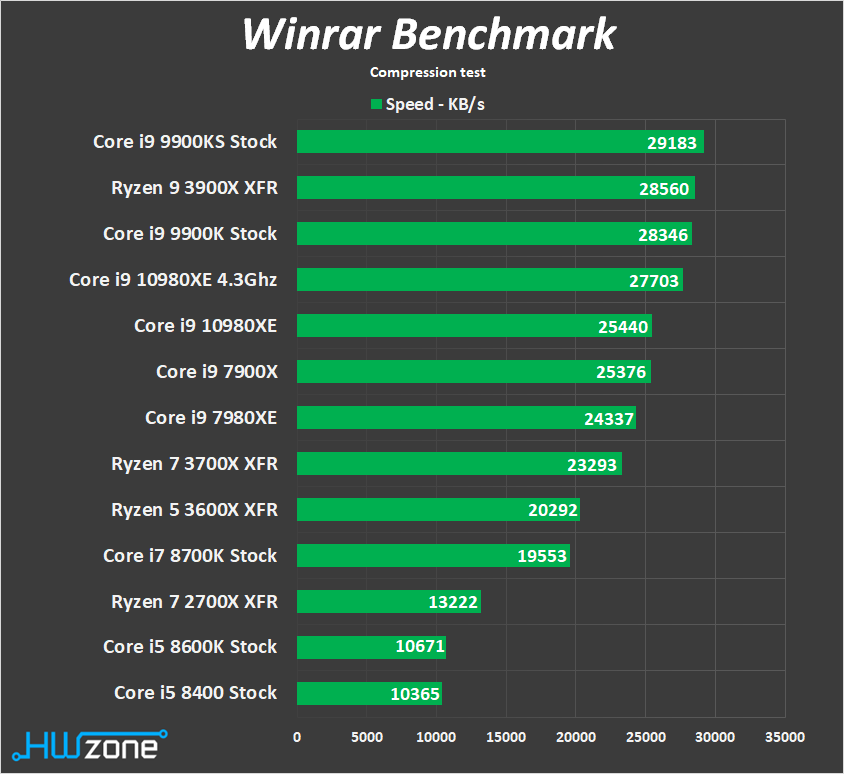 The Winrar compression test relies primarily on speed Core Lonely. As long as there are over 6 cores in the system, a very flat improvement curve enters. The 10980XE is fast here, but no more nimble with the reduced amount of cores. 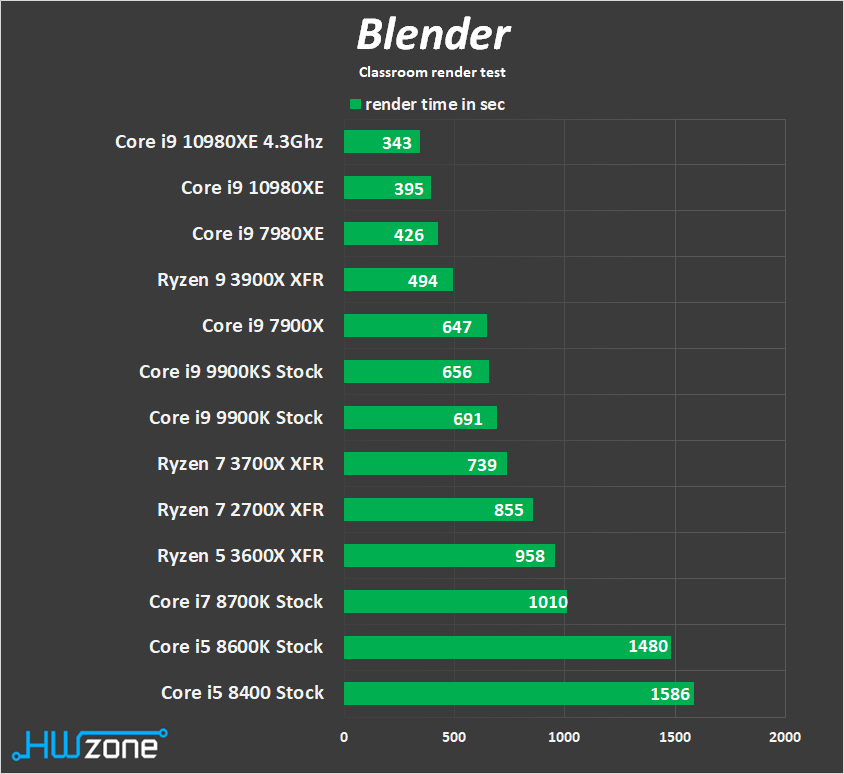 Blender is a great example of software that will be used with such an extreme processor, it is completely target audience. In this test, especially after the slight overclocking we performed, thecore i9 10980XE is extremely agile, the most agile up to a thousand dollars we've tested so far with an 343 seconds rendering time for the Classroom test, which you can download and try for yourself. If rendering time is worth money, then investing money in rendering time is lucrative. 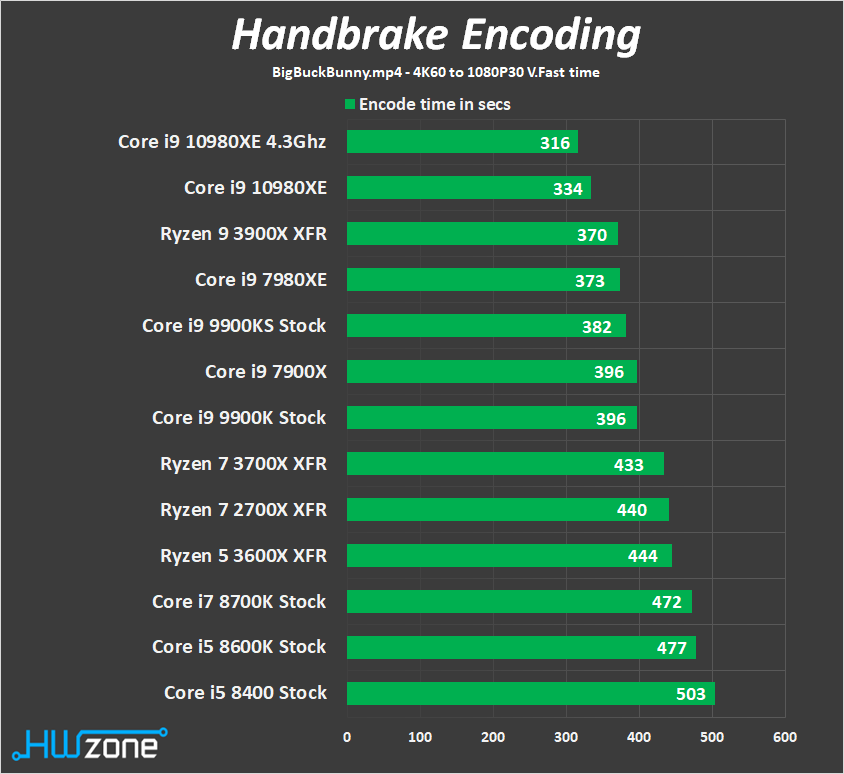 Handbrake is a great video conversion software between different formats and qualities. God-core i9 10980XE is the fastest processor we've tested in this software, though not significantly different from the mainstream processors that cost half of it. It's good to have such a processor, but it's not a high priority specifically here. 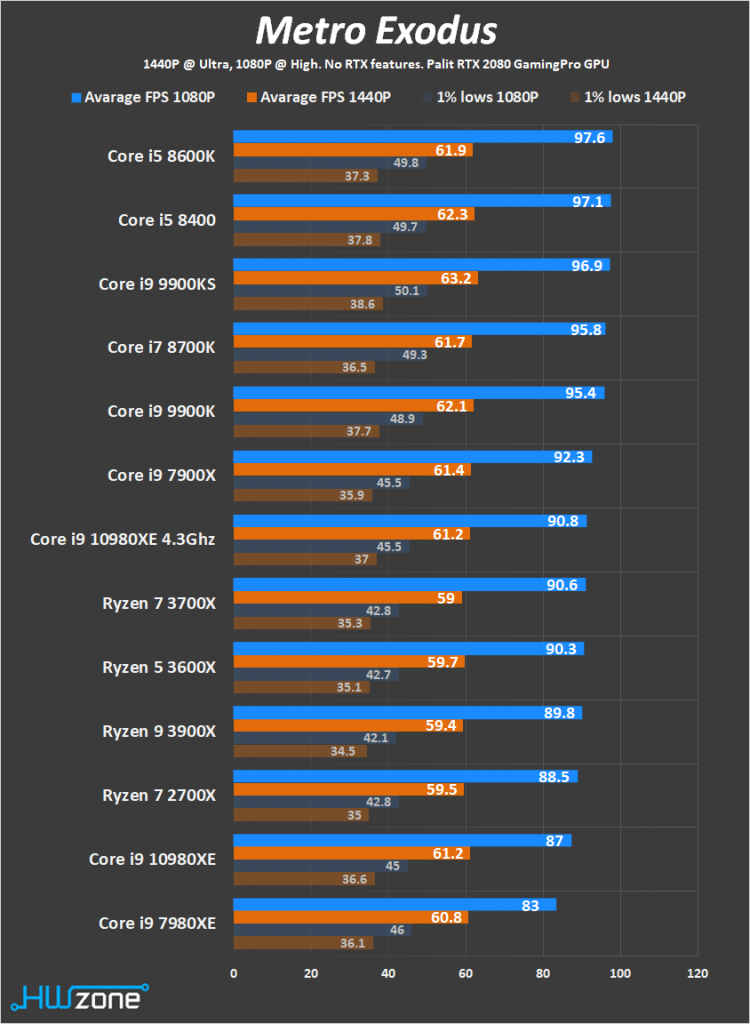 God-core i9 10980XE is not a game processor. While we would love to test many games with the 18 core processor, and we have done so many times before, it is simple and easy to see every game test that has this kind of processor for us and across the network that most processors also core i5 owners with at least 6 cores display Performence Similar to many games.

Good to know thatcore i9 10980XE is not a bad processor for gaming, but one should not expect beyond the performance of core standard i5 or core i7 at most. If gaming is a top priority and above all, core i9 9900KS at half price would be a better choice over core i9 10980XE. Of course, even cheaper options do an excellent job. 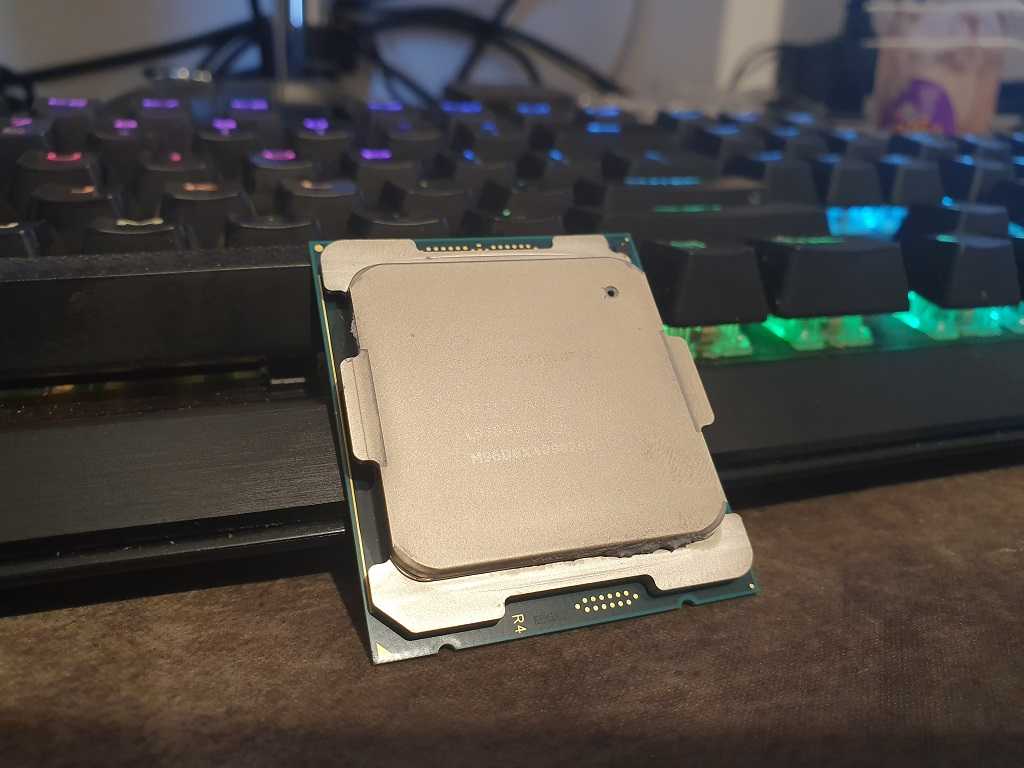 In summary, it should be understood that this is mainly a rebranding of thecore i9 9980XE to core i9 10980XE. The product is basically the same product and it is not necessarily a bad thing. Still, this is the 18 processor and Fast and Corey processor. There is no specific use for this processor to be "bad" for.

The most important news is that the price is dropping and that the product is no longer a "premium that is not easy to get." Obviously, a thousand dollars or about NIS 4,000 is a heavy price for a processor, but not for everyone. The ones for processing time are money for them - the investment is quite reasonable, dependent on course usage.

Another part that needs to be touched on is motherboards. X299 boards have been with us for over two years and this is a good thing, as getting a suitable motherboard for this processor or new brother is a rather easy task, and sometimes such a motherboard comes at a significantly accessible price. Intel platform cost combined with motherboard and processor right now Significantly lower That of AMD In TRX40. Although, I think it would be difficult to call these products competing. In one you get 18 cores along with Motherboard Relatively cheap, but one that doesn't include support forPCI-Express Generation 4.0, while in two processor starts from 1,400 dollars to 24 cores and motherboards are significantly expensive.

To-core i9 10980XE A specific right of existence and niche today. If you're looking for an agile processor on a high-performance platform and high-volume memory support, this processor is exactly what you're looking for. In addition, this architecture has plenty of room to perform overclocking and get tens of percent Performence If the cooling allows, something that no Extreme platform really allows right now - the mantra name is "can be done Overclocking, But you won't get much of it, "so that's another credit point for the processor.

The main problem I see right now is that even after a half price drop, the processor has particularly tough competition. Ryzen 9 3950X possesses the 16 cores, although we have not tested we are aware of its capabilities to achieve similar performance in many uses. This is at a cheaper price tag for both the processor and a compatible motherboard. Probably another discount for the processors Intel Bring them to an even healthier place.

I totally see a place in the market forcore i9 10980XE and other models like the 10940X thanks to X299-rich connectivity combined with performance Core Individual worthy and capabilities Overclocking בריאות. Of course, it's important to make sure that the processors are doing a good job and are worth your money for the specific use. It is very important to know before buying such a processor that is indeed the optimal choice for the desired software. Either way, live the competition.