By
Thermaltake's decade package
If you have ever thought that packaging for the upper market can not be more monstrous, expensive and surprising, then the companies that control this market are lined up for you. The market is flooded with interesting and rather crazy products, and although we have been exposed to interesting packages from this market,CoolerMaster HAF X and-NZXT Phantom, Our package was a surprise.
The story of this case begins in 2009, with Thermaltake, the leading packaging manufacturer Celebrated a decade וUnveiled New Case To mark this event as level 10. This package, which was released in a very limited way, was praised for its innovative design on the one hand and for being a little complicated to use and expensive (850 dollars) on the other hand.
A good idea is not dead
It turns out that poor performance does not necessarily kill a good idea and in January 2011 introduced a new Thermaltake prototype that bears the name Level 10 GT. This package not only comes with a much more practical price tag than its predecessor ($ 270 and NIS 1100 in Israel) but also with a more convenient structure. 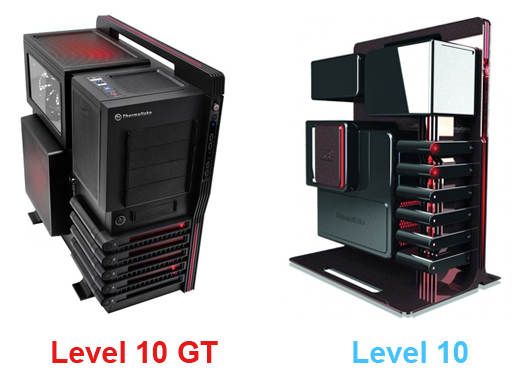 This package is marketed under two other versions: the black-and-white version of the Snow Edition (instead of the usual black color) and the LCS version, Cooling water. We're going to visit the standard version of this enclosure, which like other versions comes with flashy data such as full-USB 3.0. The high price of the chassis and the company's far-reaching statements force us to build high expectations for the chassis during the inspection.

Designed for the end-user market (gamers and overclocking) and ensuring high air performance and wide functionality, the chassis will be set up during the inspection against high standards and thoroughly explored for its full range of features.
Page 1 from 8
12...8הבא
Tags: IntelUAF YouTubeThermaltake