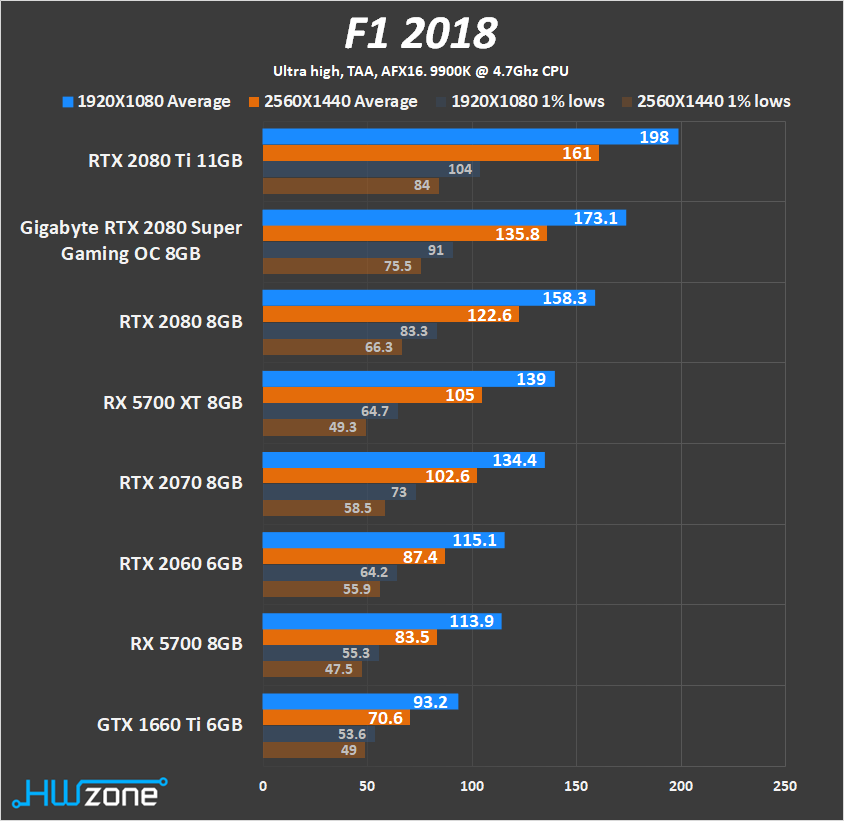 The difference in performance between a simple RTX 2080 version and the card of Gigabyte In the game F1 2018 is 10% in QHD. 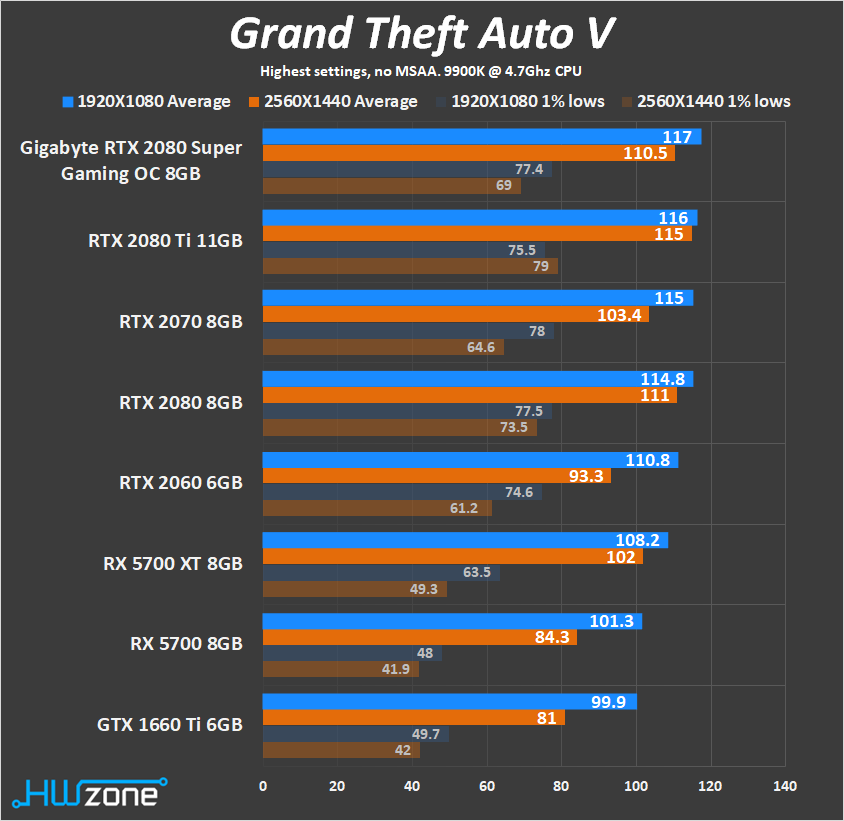 The game GTA V is popular, but shows the age and difficulties of a particularly advanced hardware with introducing a problem bottleneck to the system. Any choice over RX 5700 in this title even 1440P becomes quite puzzling. 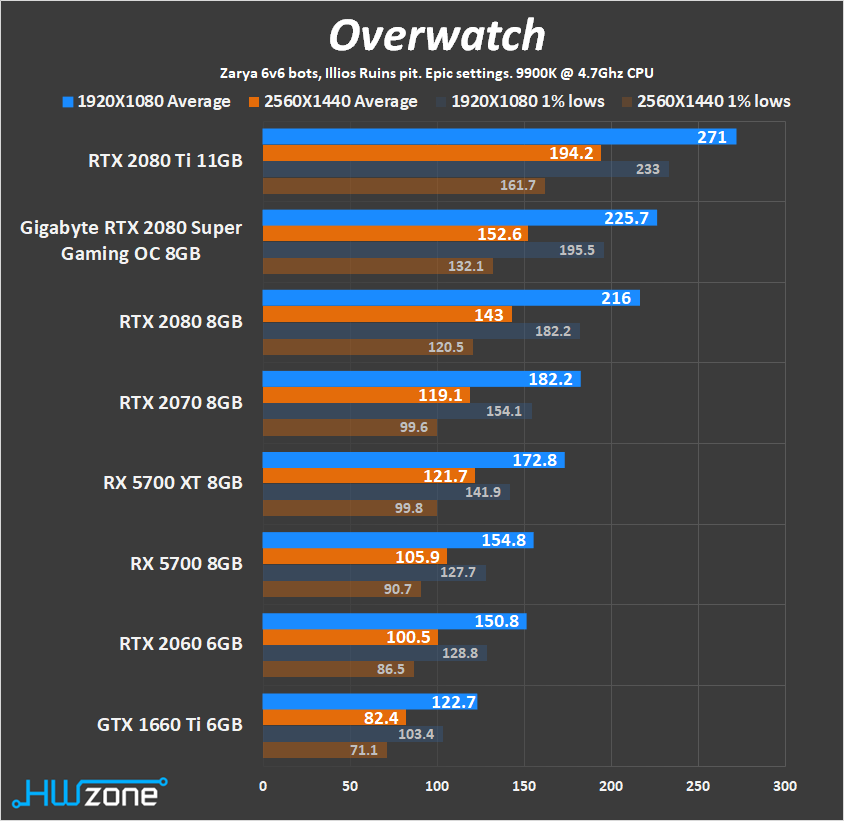 As a competitive e-sports game, Overwatch is usually played at low settings to reduce visual distractions and achieve maximum engine performance, which is obtained at 300 frames per second here. Here, mainly for graphical loading, the settings are set to the maximum. The SUPER's Gigabyte Appearance Performence Higher by 6.7% vs RTX Standard 2080. 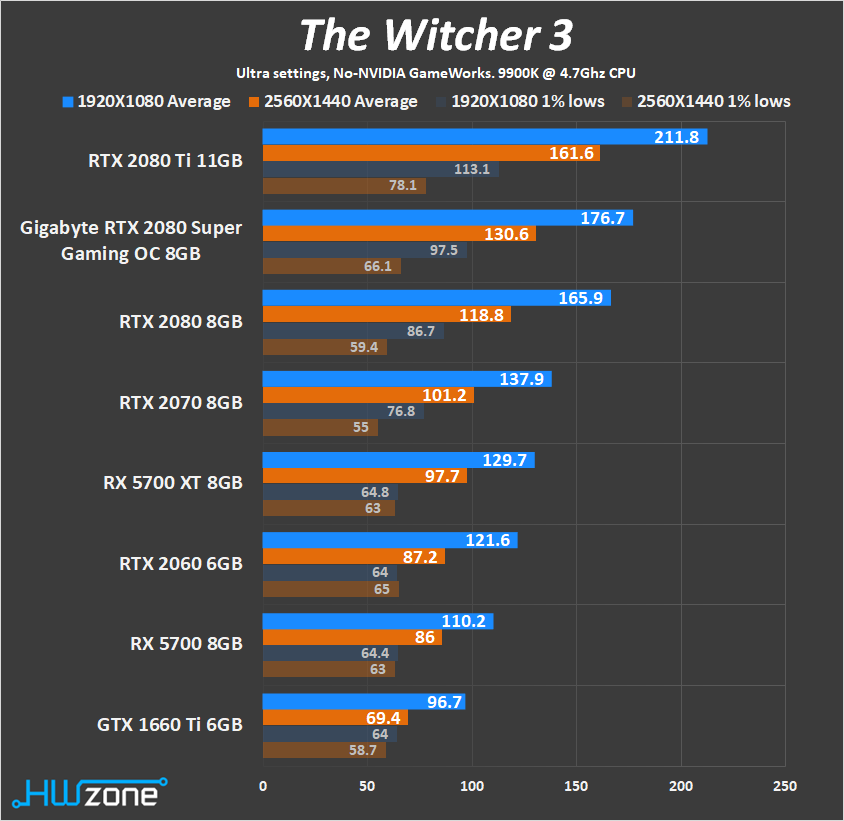 In the acclaimed and graphic game The Witcher 3, you see a little more compelling lead toRTX 2080 SUPER of 9.9% across RTX Standard 2080. 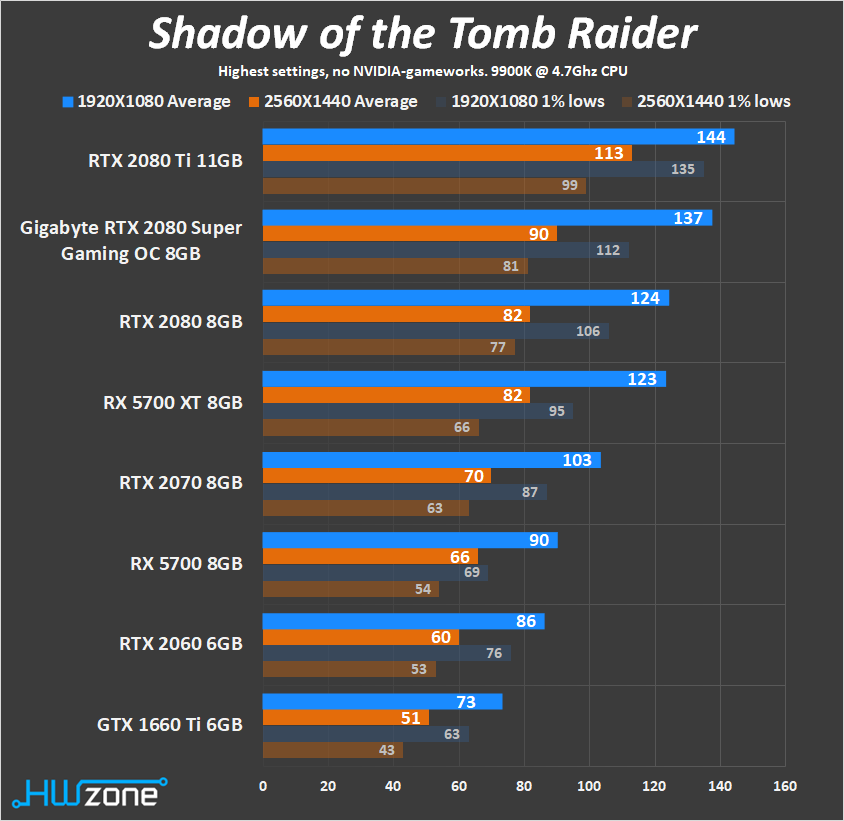 The Shadow of the Tomb Raider game is one of the heaviest in our exam group, perhaps the second heaviest visually after Metro, and by heavy I mean mainly the weight of the video card versus the weight of the exam processor. Here's the RTX 2080 SUPER version from home Gigabyte Leading on RTX Standard 2080 at 9.7%. 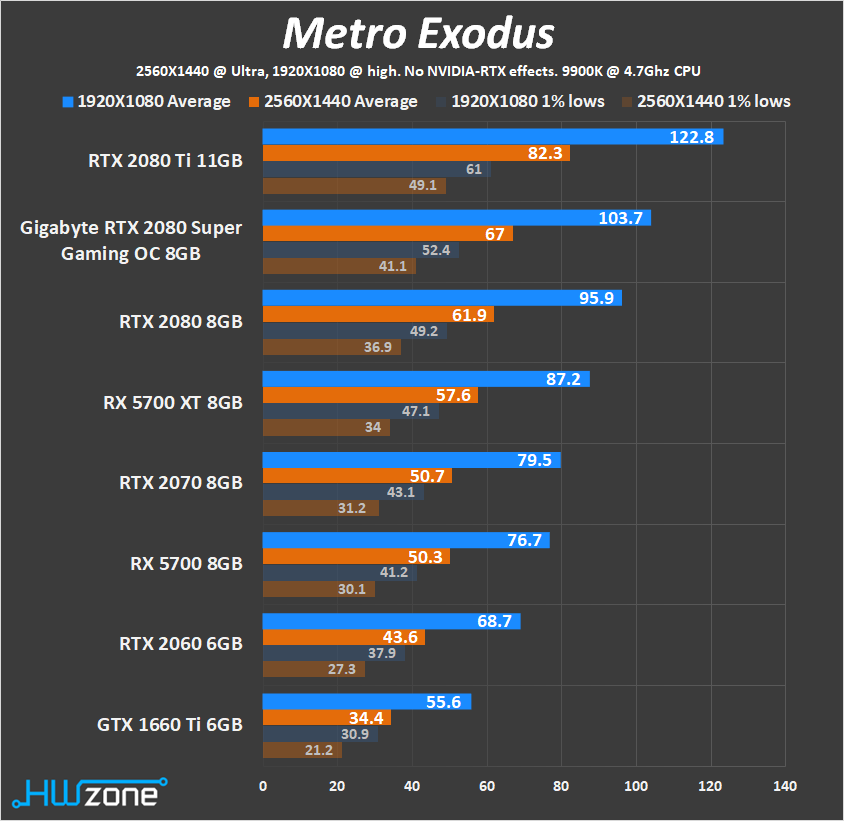 The new Metro series game is the heaviest to date, and even uses RTX Ray Tracing's technology NVIDIA. Here, for exam fairness and acceptance Performence Reasonable use of this technology was eliminated. The performance pattern we have seen so far continues with the RTX 2080 SUPER and the addition of 8.2% Performence About RTX Standard 2080. 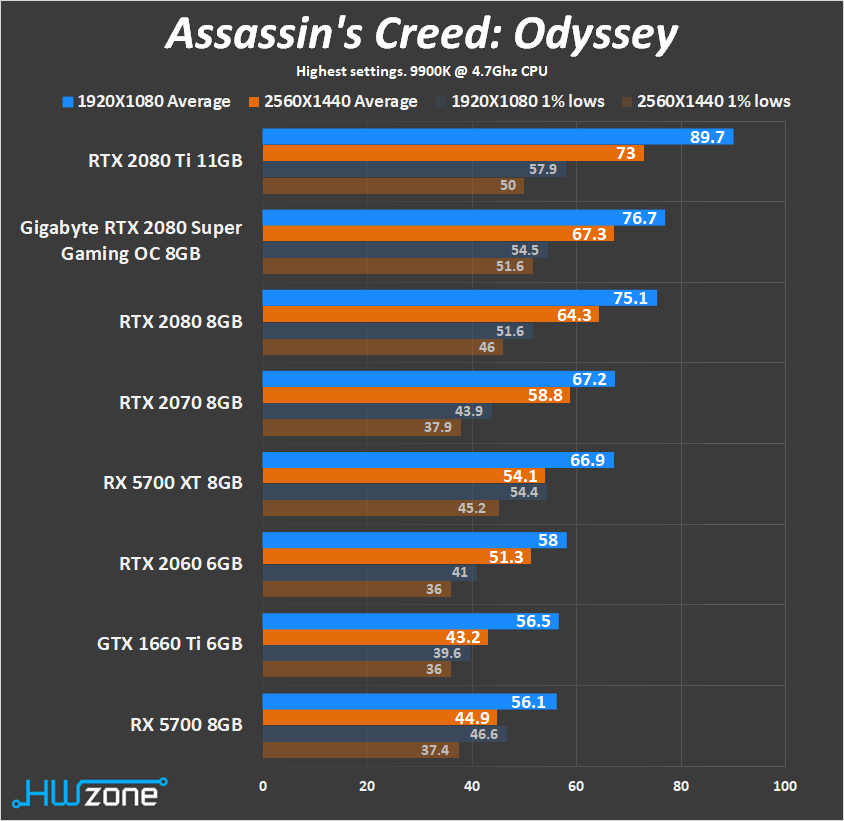 For dessert among the games being tested is the latest game launched in the Assassin's Creed series. The difference here between the advanced video cards is relatively low, and I think the main reason is that the game is quite heavy on the system processor as well. The difference even between RTX The standard 2070 and RTX 2080 SUPER here is not very convincing. 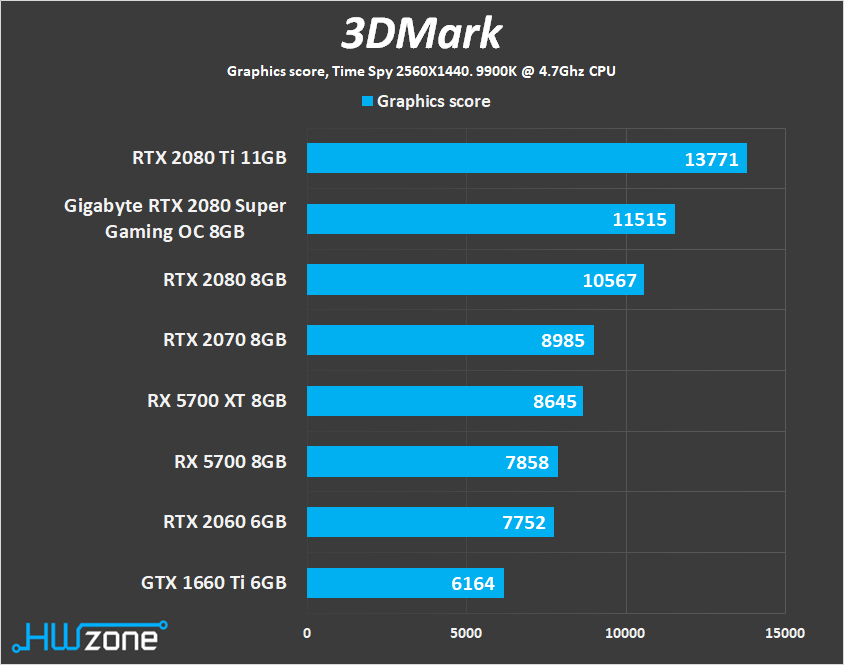 Last but not least is the 3DMark Time Spy synthetic test that does not represent any game, but graphically loads the system. Here we notice the addition of about 9% in scoring vs RTX Standard 2080. God-RTX The 2080 Ti is still up alone. 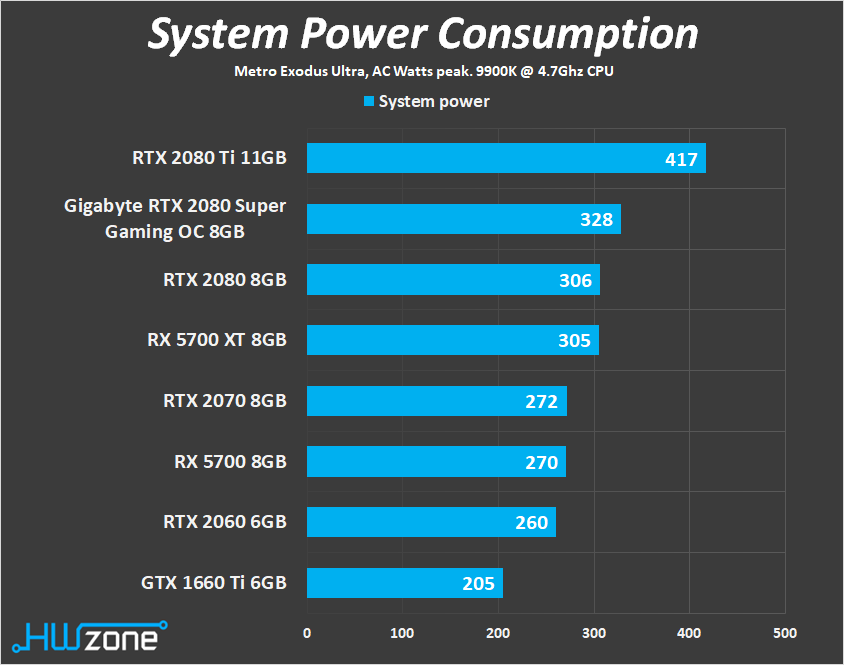 The test system's power consumption has increased slightly with the use of the SUPER card, but nothing really significant. Still, I would recommend buying a quality supplier rated 600W or higher for a system with 8 processing cores and a video card such as theRTX 2080 SUPER.

When it comes to operating temperatures and noise levels - I have to admit I was very pleasantly surprised. Usually Cooling The standard Windforce is something Gigabyte User delivers the goods but does not go above and beyond. Here, the actual operating temperature is remarkably low and the noise level as well. It's not the quietest video card I've ever heard, but there's a good chance it's one of the quietest video cards RTX 2080 SUPER you will find. 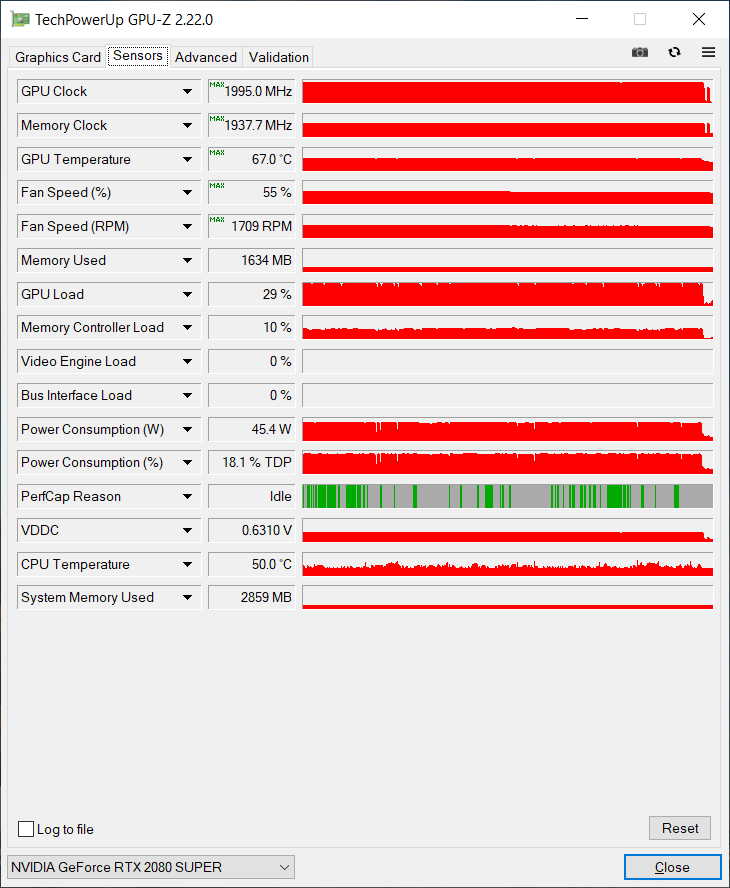 Thanks to the healthy temperature, the graphical core operates in the range between 1,920Mhz and 1,995Mhz with no problem at all and without interference and speed. These are quite high frequencies for the core Turing Such.

In your possession, I want to momentarily make names of graphic cards To prices, to illustrate a certain point. 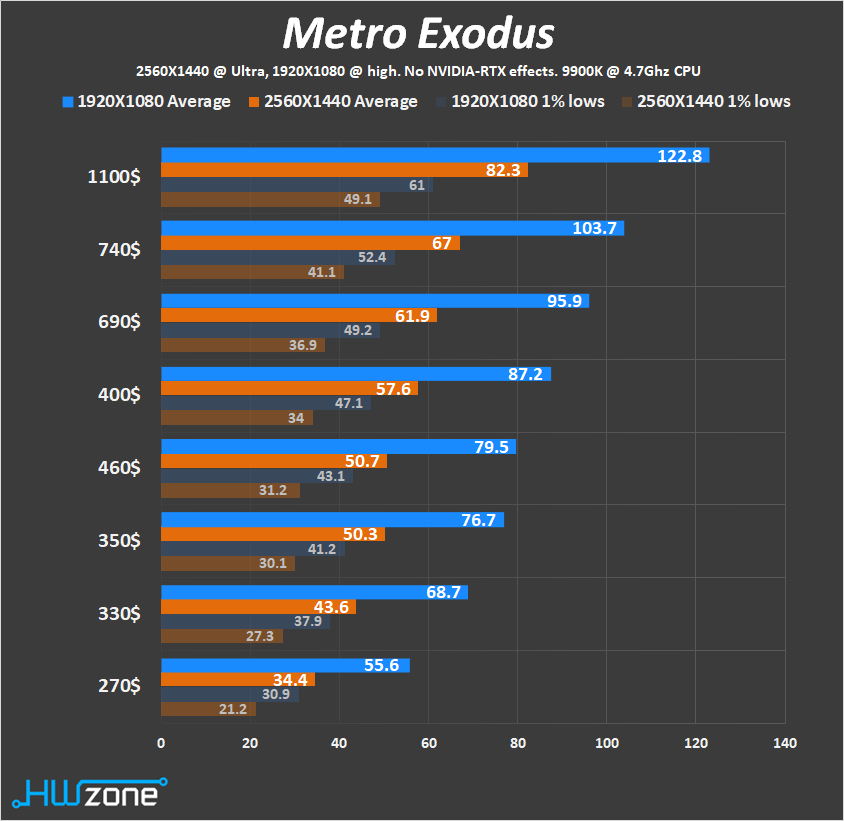 So the ratio between what you pay and what you get is big. I took Metro as a heavy game that can illustrate this perhaps in the most extreme way. Notice the logical and reasonable increase between 270 dollars, 330 dollars and 350 dollars. Another increase to RX 5700 XT in 400 dollars brings more Performence, And then something happens that is part of a very problematic effect today in the video card world.

NVIDIA created the SUPER cards to sell, and I have a feeling something went wrong with a simple sell plan to maintain a price category that still has no competition. Between 350 and 450 dollars, the cost-benefit ratio for serious performance seems to be at its peak, and something has completely broken there above the 500 dollar threshold. With an 740 dollar price tag for Gigabyte's RTX 2080 SUPER, it looks likeNVIDIA Its name makes it easier for manufacturers to promote such a product.

It is unlikely that there is a performance difference of only 20% between a video card that costs 400 dollars and one that costs over 700 dollars. I think, and even appreciate thatNVIDIA You will inevitably lower prices to RTX 2080 SUPER. He just has to get down, with or without competition, to start getting off the store shelves. There seems to be competition from the side AMD It is inevitable and it will probably happen again this year. 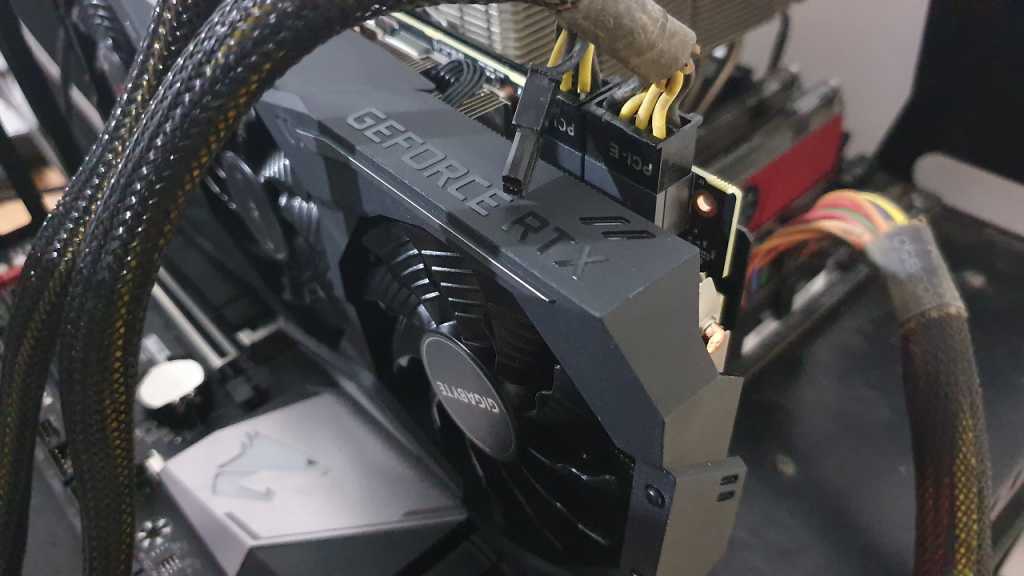 If and when the Geforce RTX 2080 SUPER dropped to a little more convenient price point, or you just want to ignore the cost-benefit ratio and go for such a video card right now - I can highly recommend theGaming OC 8G. This is one of the most balanced, quiet, cold, and cheap video cards to have a sample RTX 2080 SUPER.

Don't think at all that tens of dollars are needed for more advanced models as this model excels in everything an advanced video card should excel at. Straight to Gigabyte, and hit on hand toNVIDIA Which should give a better cost-benefit ratio over the $ 500 line. I expect she'll probably have to do it soon, thanks to the competition.

Back to: Introduction and a closer look

Wait, there's more!
Join To the group of zon And you can receive exclusive updates on various offers on the net, share content that you find interesting, consult with members of the site, and more - Join now!
Tags
Gigabyte NVIDIA RTX
Share
Facebook Twitter LinkedIn WhatsApp Telegram