These days, if you ask any salesman in a computer store or a person who deals in top end equipment for desktops and laptops "Which SSD drive is most recommended?" There is a high probability that the words Samsung or Crucial His words came out.

the reason for that? Well, the SSD drives market is divided into two parts. The first part is the chip makers themselves. Companies like Crucial Or Samsung have factories that produce at least the same NAND chips inside the SSDs, if not the controllers,DDR Which are used by the controllers on the drives.

This gives them the ability to dictate the price of products in the market. Most of theSSD Today they are simply dictated by what Samsung or Micron (the parent company of the Crucial brand) say. They control the largest share of both server and home users.

The second part of the E-SSD Including companies like ADATA, such as Corsair Or Silicon Power for example. These are companies that deal with system storage and memory but do not independently create the hardware in question. What they actually do is choose the ingredients for their products, manufacture third-party parts, pack and market.

On a regular basis, these companies were dragged behind in terms of price. The logic of this fact comes simply from the situation to which they are imprisoned. They are forced to pay brokerage fees on the parts and the product that comes to the consumer will usually be at a similar price or higher than that of the major manufacturers.

Today we bring you a Cinderella story in the world ofSSD With an M.2 drive that shares an important feature with the industry's leading drive manufacturers. 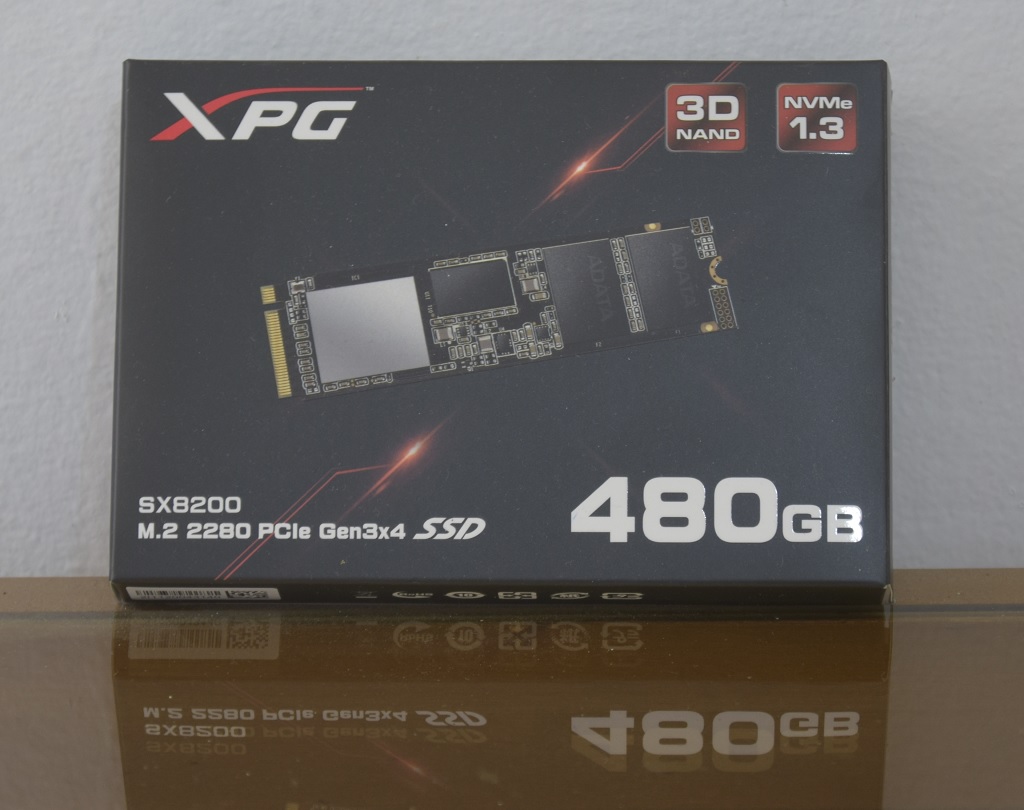 This is a drive that connects to the M.2 interface to the motherboards of computers Mobile And stationary. It uses bandwidth PCI-Express Of X4 when it is connected. Depending on the port on the motherboard and the manufacturer's instructions, it will be decided whether the bandwidth will come directly from the processor or chipset (such as Z370 or X470, for example). In both cases the speed is expected to be similar. 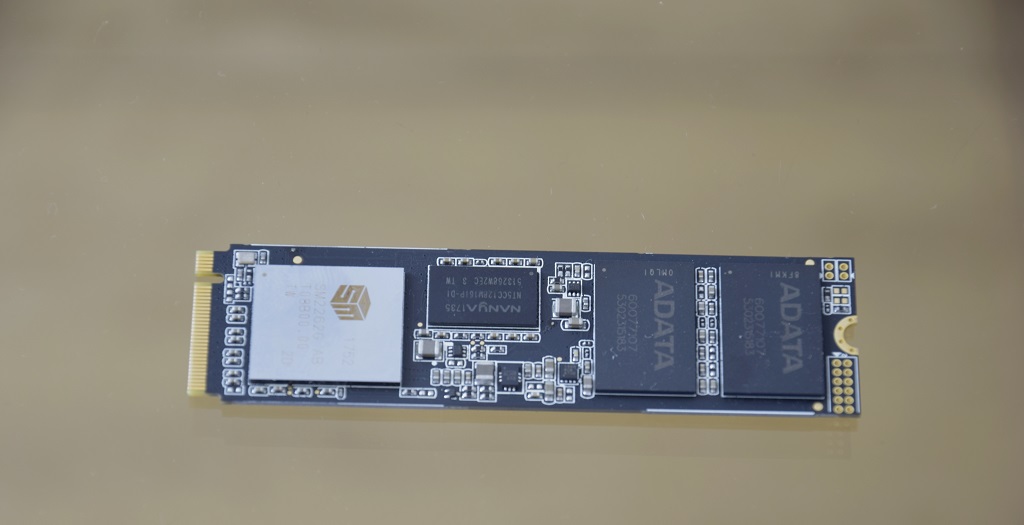 The SX8200 drive contains a SiliconMotion SM2262 controller. This is exactly the same controller that is inThe Intel 760p drive. Next to this controller are Nanya's DDR4 chips. In addition, there are two three-dimensional, three-layer NAND chips produced in microns. This component is also featured on the new SSD drives Intel. to all chip This has a maximum volume of 128 gigabytes. 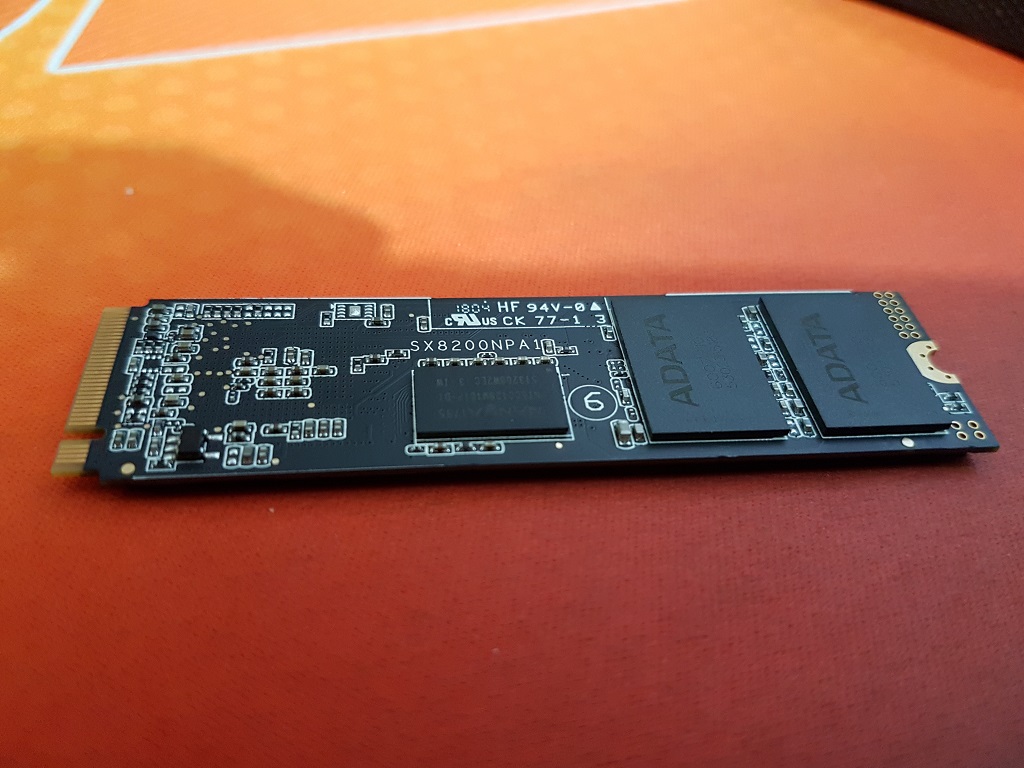 There is a memory chip in the back of the drive DDR4 In addition to two chips storage. "Wait, there's 512GB here. Why can we only use 480?" Great question, dear reader. The reason the manufacturer זיכרון Limits the maximum amount of storage even though more chips are in order to maintain drive reliability by using the Redundancy system. Such a system usually uses the available memory to replace rooms זיכרון Damaged or full when needed. 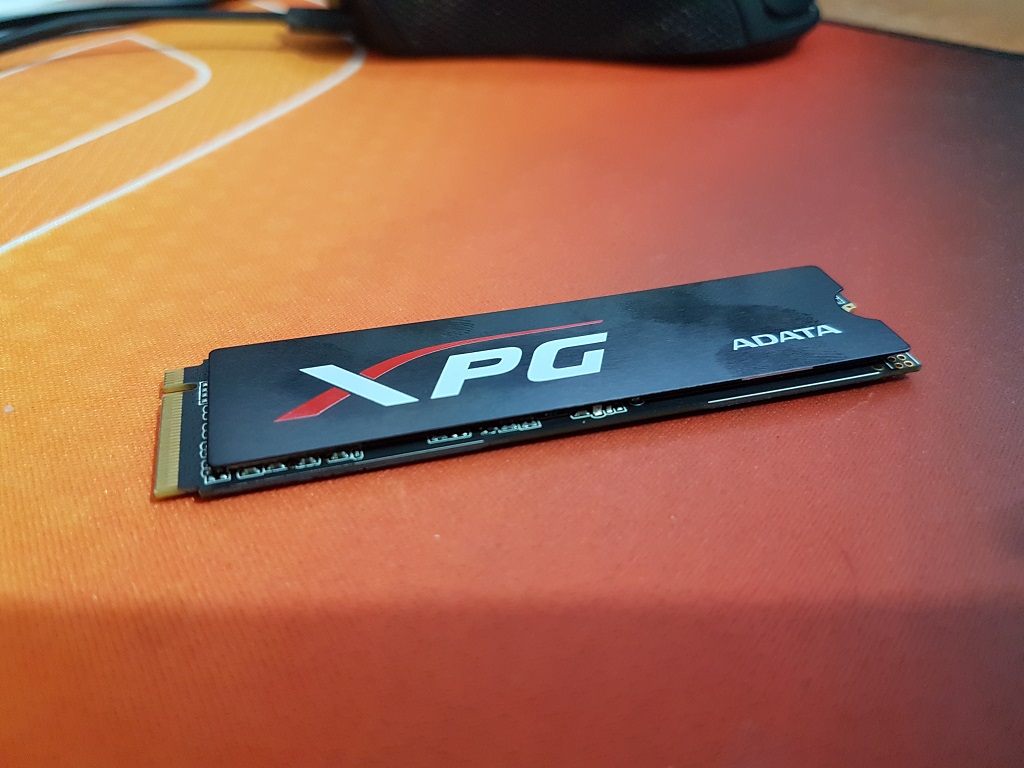 This drive comes with a thin piece of aluminum and a thermal pad so you can glue it on the drive side if you want. It is recommended to use it on the side where the controller is located, since it is the most important component for cooling. High heat does not affect the chipsNAND As it affects theNAND And its performance.

The reasons for success

I'll give you a spoiler right now, even before we get to the performance tests. The reason this drive is very special, apart from using fast, uncompromising components, is its market price.

To date, there is a great reason to purchase standard SATA drives even in highly advanced systems, which is the ultra-attractive price of NVM drives. You can not blame the users, that's very true. Today, on a popular 500GB SATA drive, you will pay around NIS 550. On a fast NVME drive like Samsung 's 960 EVO or 760p' s Intel In a similar volume you will pay about 900 to 1100. Not particularly fair to many users.

The 8200GB ADATA XPG SX480 costs NIS 650 as the recommended price for the consumer and comes with other 5 years. I honestly do not see too many reasons to compromise on 100 shekels and get off the drive NVMe Advanced SATA drive. There is a product here at a price that makes a lot of mess for the big manufacturers and is low in tens of percentage points in price.

This is actually the first time in my memory that a drive from a manufacturer that does not manufacture the chips itself costs so little compared to the competition. I have no idea how ADATA Does it, and how much it earns on each drive, but I think it proves that you can sell drives at a significantly lower cost than what we are offered. I have not yet started talking about promotions that it is doing in Israel and operations that lower the drive below the 600 line.

What's good is that this is not random or random, at least it does not seem so. B-ADATA We want to buy the heart of the European market (we are also a part of it, in a big way) and to maintain a certain price and control. Nice on the part of ADATA To make such a move. Let's see how fast the drive in question. 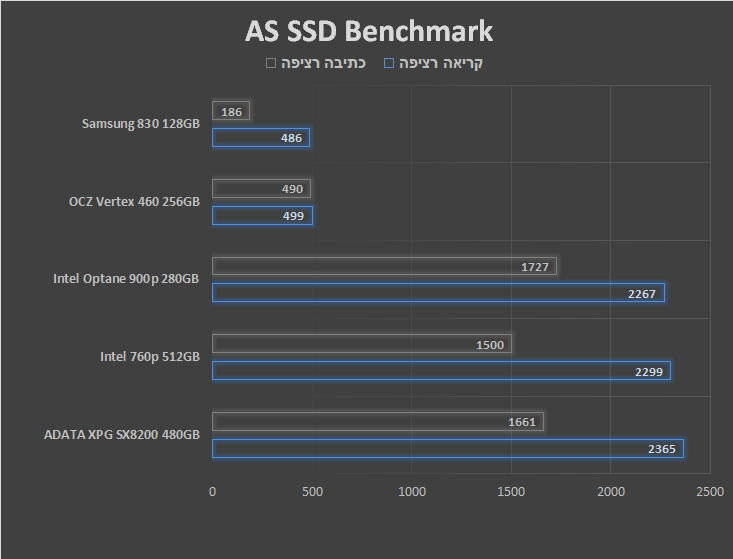 The first test is running a sprint into a single file. How fast are the SSDs that are tested when copying or reading a single large file? Well, components are similar to 760p's Intel Lead to similar performance. In the reading test, he bypassed the other drives examined. Of course, it was important for me to show contrast on standard SATA drives such as the relatively advanced Vertex 460, and the modest 830 סמסונג. 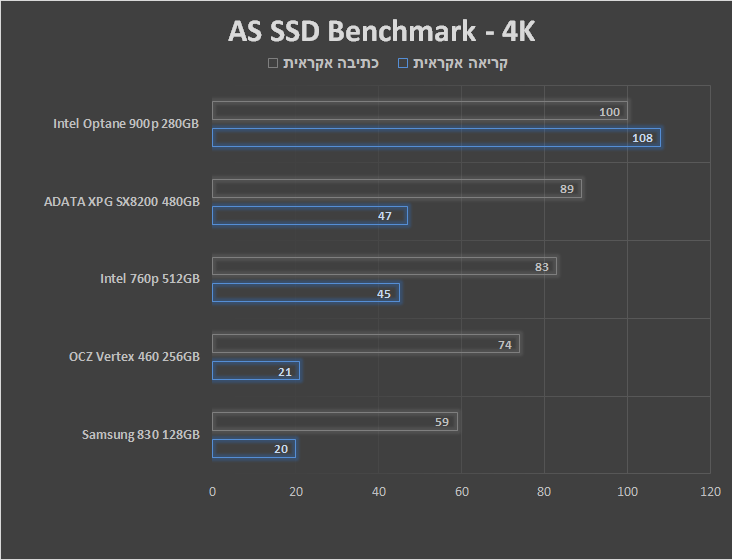 The test4k Sequentially pulls at a volume of 4 in kilobytes in sequence. This test examines the ability of the drive in all its components to load very complex software that includes a lot of screws and small nuts inside it. Is actually the most intensive test in terms of difficulty that is likely to run on drives. It is also relatively realistic, as most programs do not include files smaller than 4 kilobytes.

In this test we already know that the prestigious 900p drive Intel Is the market leader, but the SX8200 surprised us with slightly higher performance than 760p's Intel. This may be due to the use of memory chips DDR4 More effective to visit. The read speeds of this drive in the4k Multiply those of the advanced SATA drive. 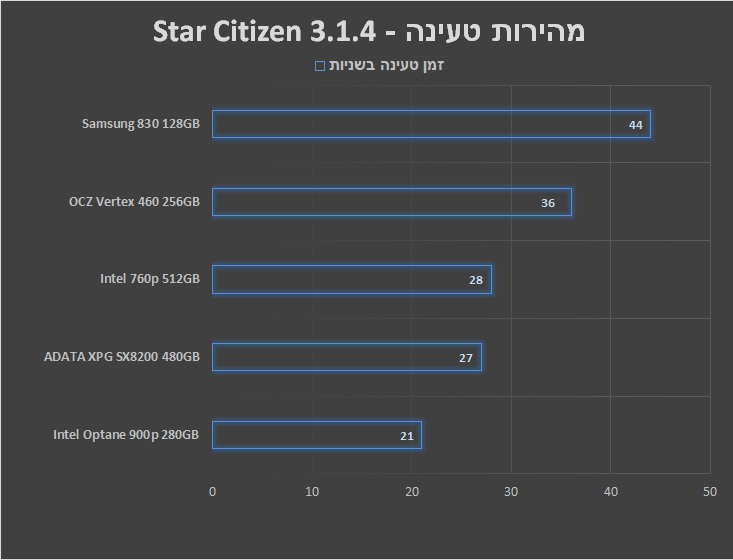 The Citizen Star game is one of my favorite test drives. This is a game that contains files of all sizes and a huge amount. It shows in an authentic way the differences that hardware makes in storage. Here too, the SX8200 shows superiority over the 760p and SATA drives. The test by the way, to those who wonder, or from the launch of the game to the entrance and control of the figure. I also examined hard drive WD's 2TB standard only to see how much it will distort the graph you see. The waiting time was two full minutes. Do not play Star Citizen On a hard disk drive. 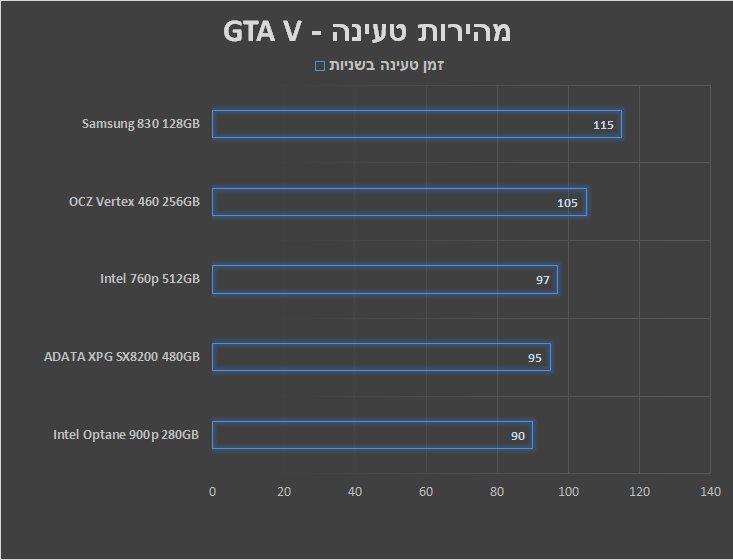 Rockstar's bestseller is a slightly different story. In the GTA V game load times are quite similar between the V-SSD Different. However, it appears that stronger hardware makes SX8200 a shorter wait with easy transport over 760p. A standard hard disk drive resulted in a loading time of 140 seconds, to be puzzled.

How much does the SX8200 pay for competitors? We have already raised the price issue earlier in the audit. Today, among the major competitors of the SX8200 are drives such as the MX500 Crucial and the-Kingston A1000, one of which is a standard SATA drive and the other a drive NVMe Respectively.

The XPG SX8200 480GB costs NIS 650 and you will find it much less if you just search in stores in Israel. I really do not see many reasons to purchase other drives in this volume, whether SATA or NVMe In the M.2 interface. Some unfortunate coincidences should occur in order for a user with such a budget to purchase a standard MX500 over the SX8200 such as lack of system interface or incompatibility with drives NVMe. If you have a computer system even five years old today, these are unlikely to happen.

Equipped with a five-year warranty and leading to absolutely serious performance, the SX8200 is leading a market-breaking trend. Even today when "budget" NVMe drives such as the 970 EVO's were launched סמסונג, I see very few reasons to spend tens of percent grabbing a price on a practically practical difference in the experience of use and the same warranty period. 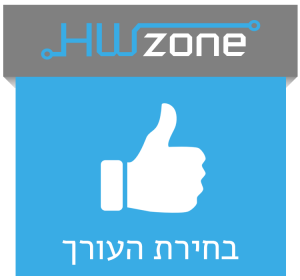 ADATA played it, and it has a real winner. Many market drives use all kinds of unnecessary gimmicks to justify a high price, but the Israeli public knows exactly what it wants. It remains to be hoped that it will survive in this market as a third party manufacturer and lead to a serious decline in the price of theNVMe Sophisticated and fast. This drive receives the HWzone Editor's Choice Award based on its performance and affordable price - it's hard to recommend many other products in this price and volume category as well.