Intel has announced a new series of Processors For computers Mobile Advanced. The 11th generation in mobile is finally advancing to six and eight cores as well Tiger lake-H

The time has come for her Intel Brings to the world of laptops the care it has given to the world of desktop processors recently with the launch of another series Processors. Tiger Lake H with six and eight cores is the mobile version for generation processors Core 11 Example Core i9 or 11900K Core i5 11600K for example. 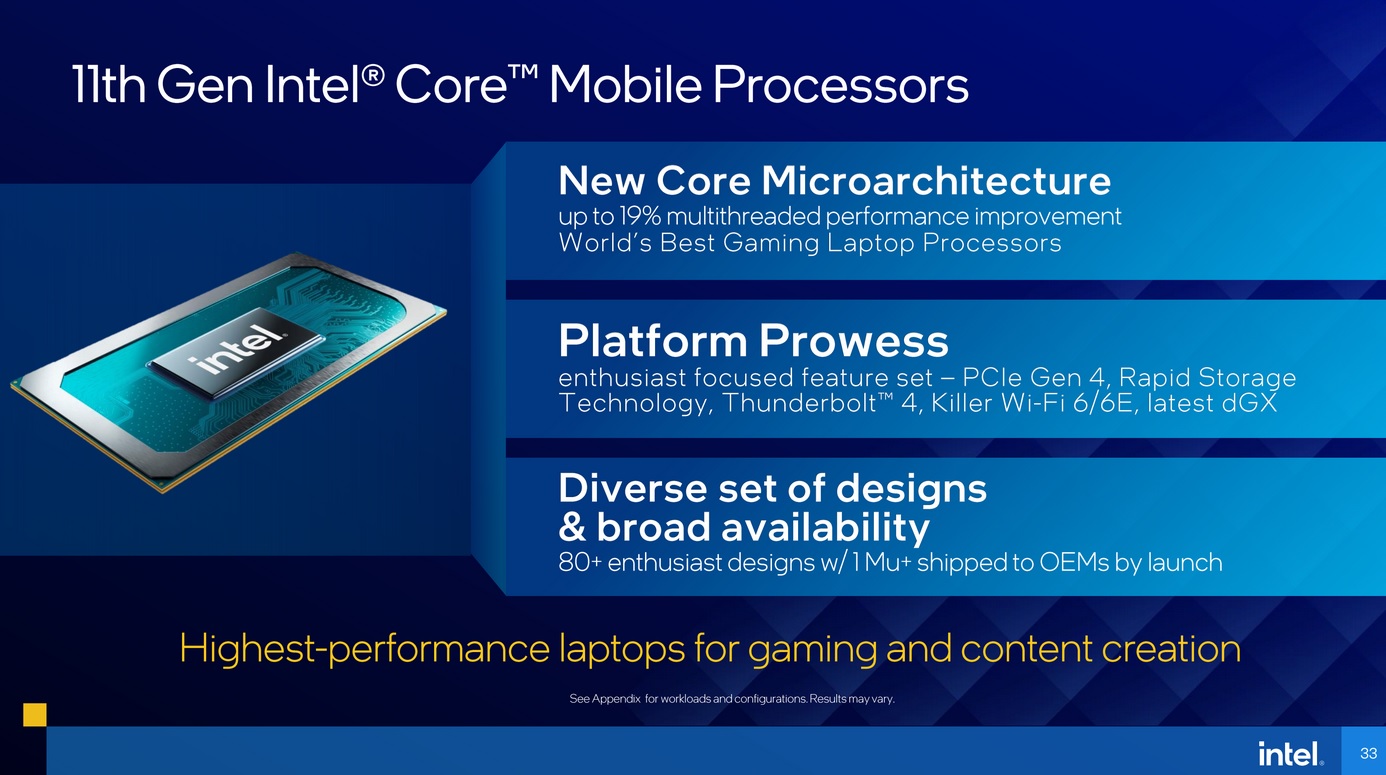 The new 11th generation processors for mobile are very similar to the composition of processors we have recently seen in desktop computers in that they use the Willow Cove cores. These are processing cores manufactured in a 10 nm process with the fresh SuperFin technology of Intel.

All Tiger Lake processors for mobile come in an advanced production process of 10 nanometers. The improvements include, among other things, an upgrade to the PCI-Express 4.0 generation over 6-series and 8-core 10-series processors, as well as connectivity. Thunderbolt 4. 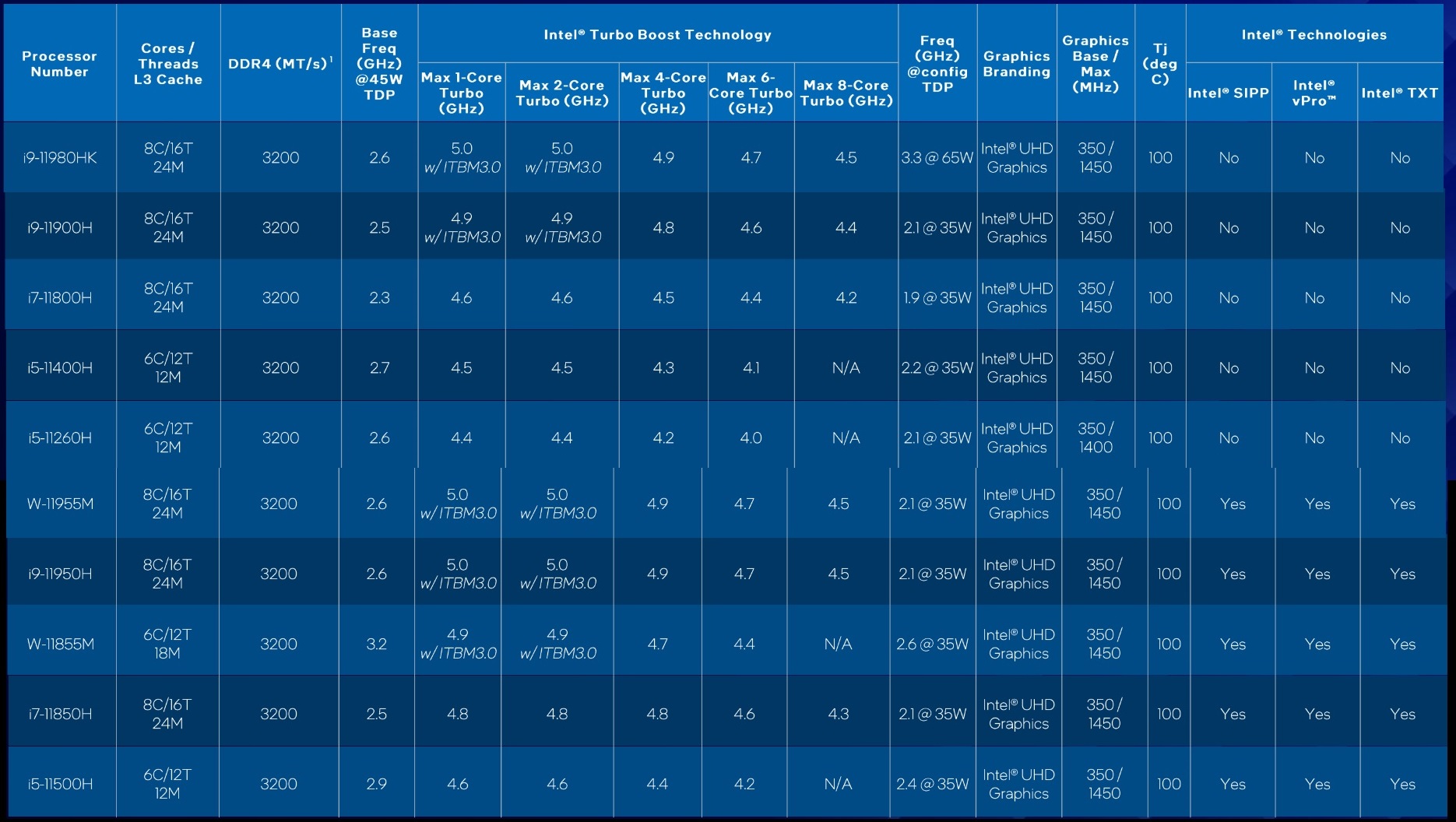 This is the new series of processors that is coming to the world of laptops with the advanced 11th generation of Intel. There is a combination of Xeon branded processors here along with Core when we are expected to see Xeon in laptops designed to be used as portable workstations, usually also in combination with third party graphics cores for such uses. The graphics core that is inside these processors is the 12th generation of the graphics cores of Intel, In the same composition as what we encounter Processors Desktop. 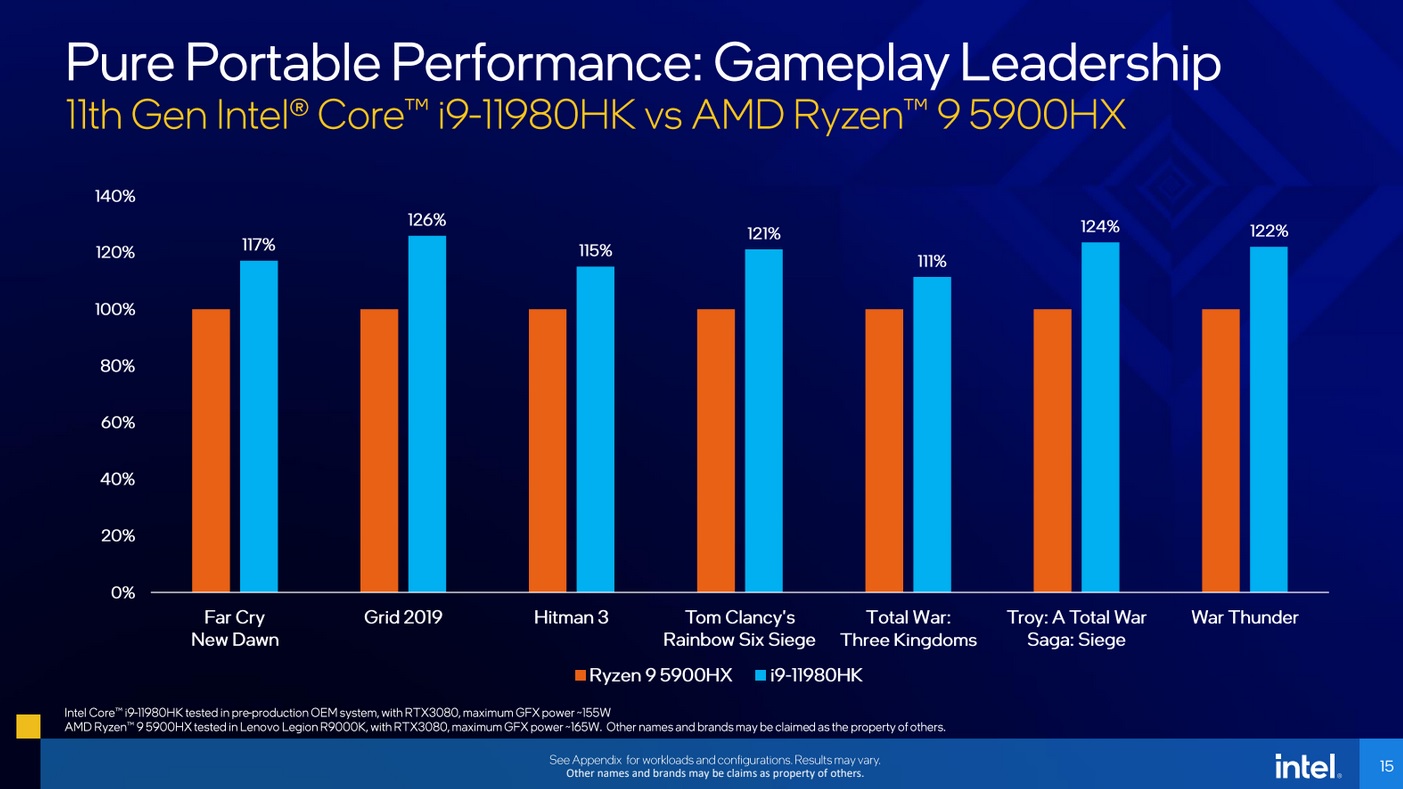 On paper, Intel promises that its Core i9 11980HK will show significantly superior gaming performance to those found in competition from AMD In the Ryzen 9 5900HX model. Of course it is important to take these promises on a limited warranty as they are intended for marketing purposes on the part of Intel. As always, our recommendation is to wait for independent reviews in order to know in which situation which processor is faster and more efficient. 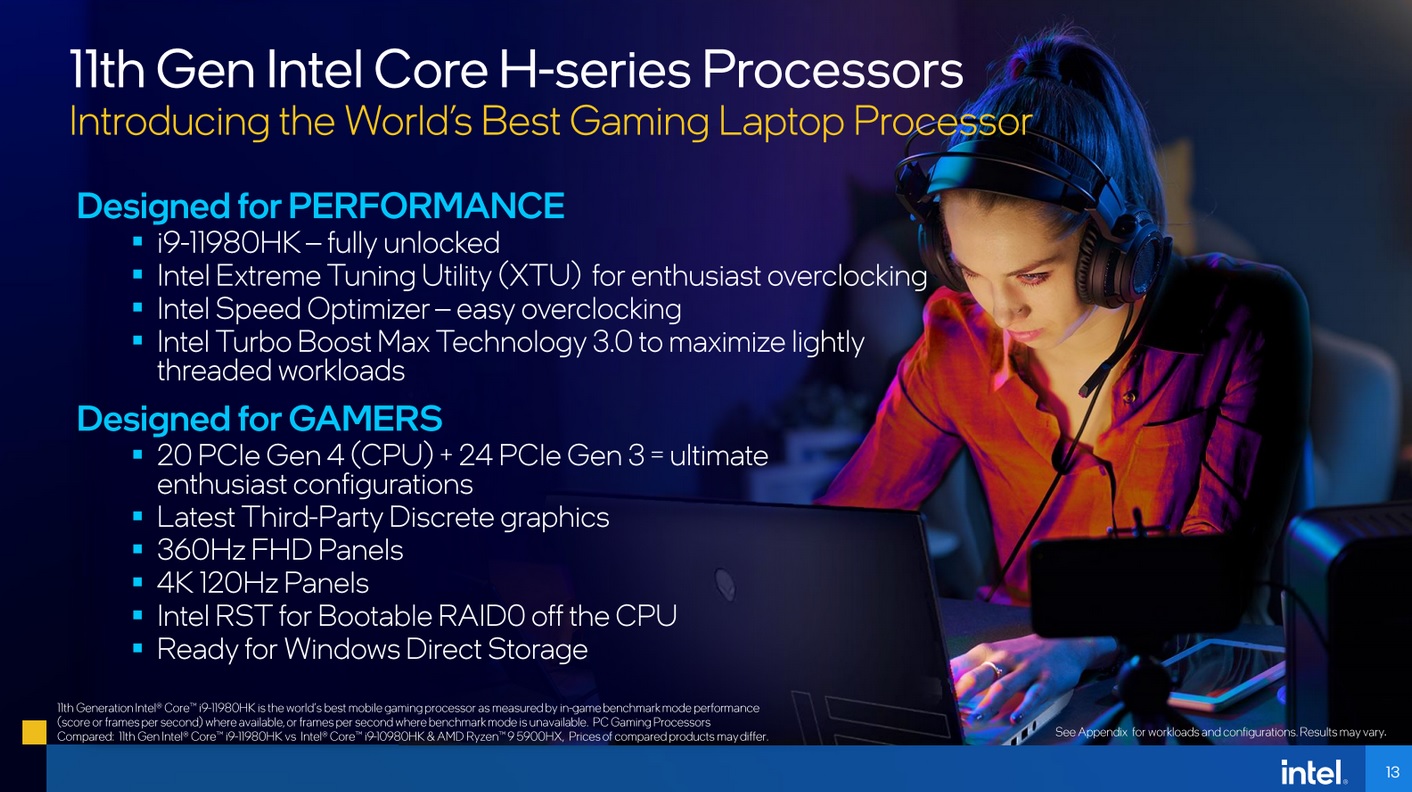 The Core i9 11980HK (we are close to a generation where the names will be shortened… right?), Is the most advanced in the bunch and gets an open frequency multiplier for overclocking similar to the K processors we are familiar with in desktop processors. It is actually the mobile equivalent of the Core i9 11900K. According to Intel, The advantage in which according to the competition will be reflected in gaming mainly in the high refresh frequencies of laptop screens.

It is difficult to know how much it will really be possible to stretch the voltage of a portable processor especially in an environment with Cooling Limited, but the option exists there as a tribute.

Willow Cove's Architecture Intel Based on 10 nanometers, it reaches laptops and refreshes the 10th generation in advanced computers for gaming and content creation, which are based on the old 14 nanometer process. Is this a line alignment with processors Zen 3 AMD's deceased? Possibly, but it mostly depends on independent performance tests. Also, inventory availability must be healthy to serve those potential users. 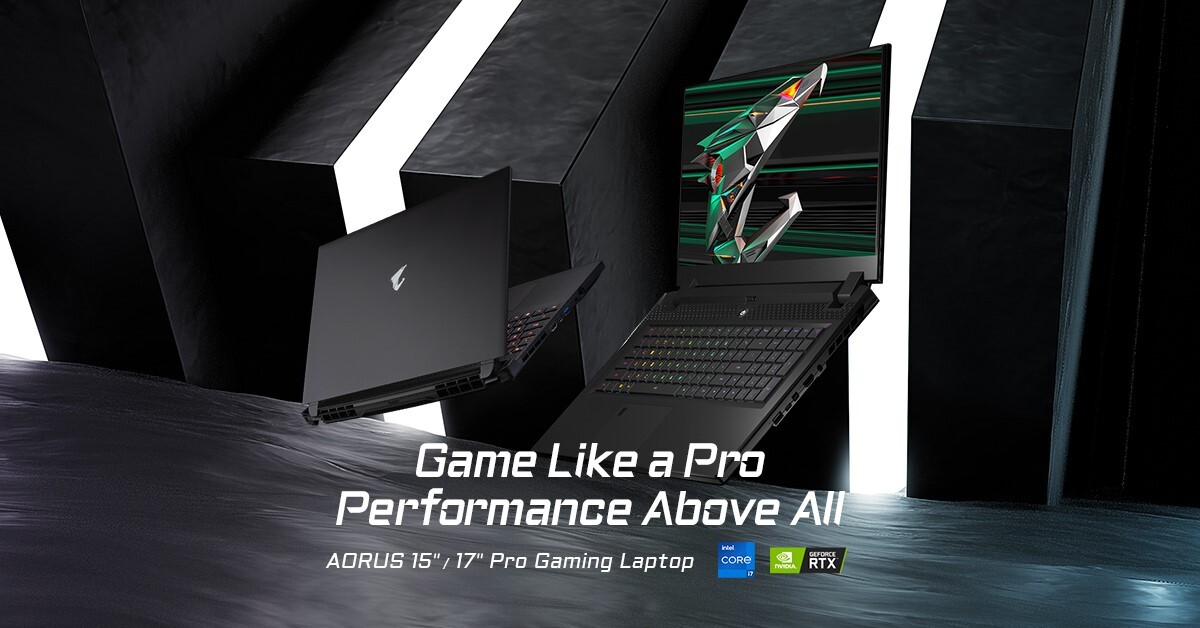 Manufacturers of laptops and hardware such as GIGABYTE took the opportunity to announce a refreshed series with the new Tiger Lake H processors. For those who follow, it is known that despite their excellent features, GIGABYTE laptops have mostly gotten grounded in performance due to the use of a processor that shows its age compared to the desired power in using an advanced video card of NVIDIA. The new Tiger Lake H processors are expected to boost performance over processors Comet Lake H (Generation 10) existing, also in gaming. 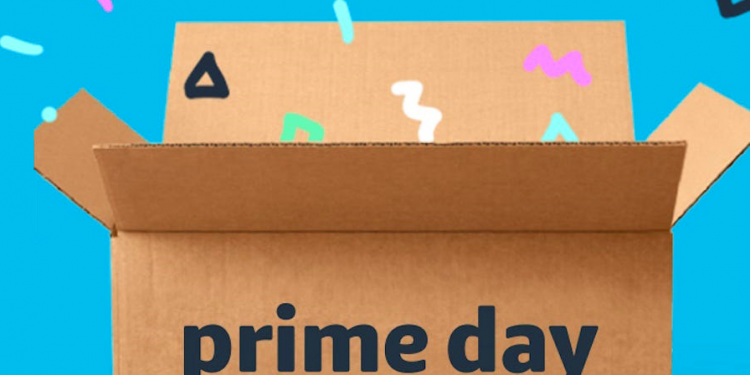