First images of the Socket 939 processor

The move to the new residency is not only due to the notion that 940 is over-priced, but will allow AMD to get rid of the memory requirements registered with AthlonFX processors on the one hand, and enable the memory controller upgrade in Athlon64 processors - so that it supports Dual Channel DDR on the other.
After the transition, the Athlon64 processors will contain less of the L2 cache and will essentially become mainstream processors, while the higher market will be owned by faster AthlonFX processors and will have a larger cache.

The E04Hardware site has released the first images of the AthlonFX 53 processor running in the Socket 939, and displays images of the same Socket 940 processor and highlights the differences between the two processors, which are not obvious. 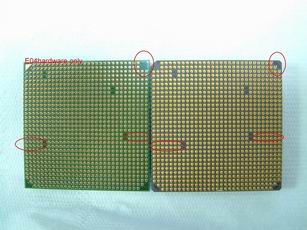