Flashing or a joke? Intel will offer mobile processors with fast capabilities

It is possible that the E-Skylake Will the new one provide us with the first portable K processors of its kind that can be accelerated independently?

Just recently we saw that the chip giant is not planning far-reaching changes in the world of their laptop processors, at least as far as the U product line that has long been popular and most common, thanks to the growing category of lightweight and thin (still need to call them Ultrabooks?) Is growing. However, a parallel report states that precisely in the field of more powerful and advanced laptop processors we may see a particularly new and surprising proposal.

According to a small line in one of the reports on its official website (and an official slide with a similar message), Intel will launch quad-core portable processors from the K family that will contain fast capabilities - ostensibly similar to the popular desktop K processors among performance and gaming enthusiasts. If the report is correct, this is great news, since to date the limited and very clear thermal envelopes of the mobile models have not allowed any change in their working frequencies outside of what was set for them by Intel herself. 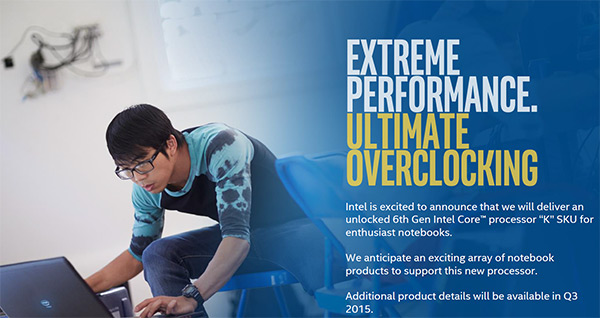 If we see Processors Capable of speeding and perhaps even an open frequency multiplier on laptops, it is clear that Processors They will need a dynamic frequency envelope and, above all, strict overheating protection, which will prevent amateur raisers from causing permanent damage to the entire system if they overload the frequencies or operate the computer in an environment that is not ideal.

After getting a glimpse of the first Xeon processors pre-designed for use in mobile systems, displaying capable models The fast (Although it still sounds strange to us) will be able to make the next generationSkylake Most significant for mobile platforms for many years - since the launch of the first quad-core mobile models, in fact.

As always, we'll keep track of the matter and will update you as soon as we find out more.