Gaming even without a video card? The Ryzen 5 3400G processor in review

Are we in an era where up-to-date games can be enjoyed even without a dedicated graphics card? We took a tour of the Ryzen 5 3400G, the most powerful processor with the built-in graphics core thatAMD Offer, for check

Among the three major silicon makers of the personal computer world, AMD It is the only one that is correct at this time of writing, producing both processors and graphics cores for video cards. It is true that Intel also produces graphical cores embedded in processors, but it is not possible to buy a processor for a resident today. Intel Containing Core Extremely strong graphic.

This market requirement enters the APU processors AMD, Processors These come with exceptionally strong graphics cores (at least compared to other cores' graphics cores) which all you need to do is actually connect a screen to the motherboard to get a 3D view and acceleration.

In the previous generation of Ryzen processors, we first saw the implementation of a powerful graphics core that also appears on the latest video cards of AMD. These are theRYZEN 3 2200G andRYZEN 5 2400G. These processors are being replaced this yearRYZEN 3 3200G andRYZEN 5 3400G.

The leader among them, the Ryzen 5 3400G contains a more powerful 4-core and 8-thread processing configuration using SMT (Simultaneous Multithreading) technology and also Core Built-in Vega 11 graphic. This compares to one that includes 4 cores without SMT technology and Vega 8 graphics core in Ryzen 3 models. The Ryzen 5 3400G is actually a Ryzen 5 2400G with frequency Core And a slightly higher graphical kernel. 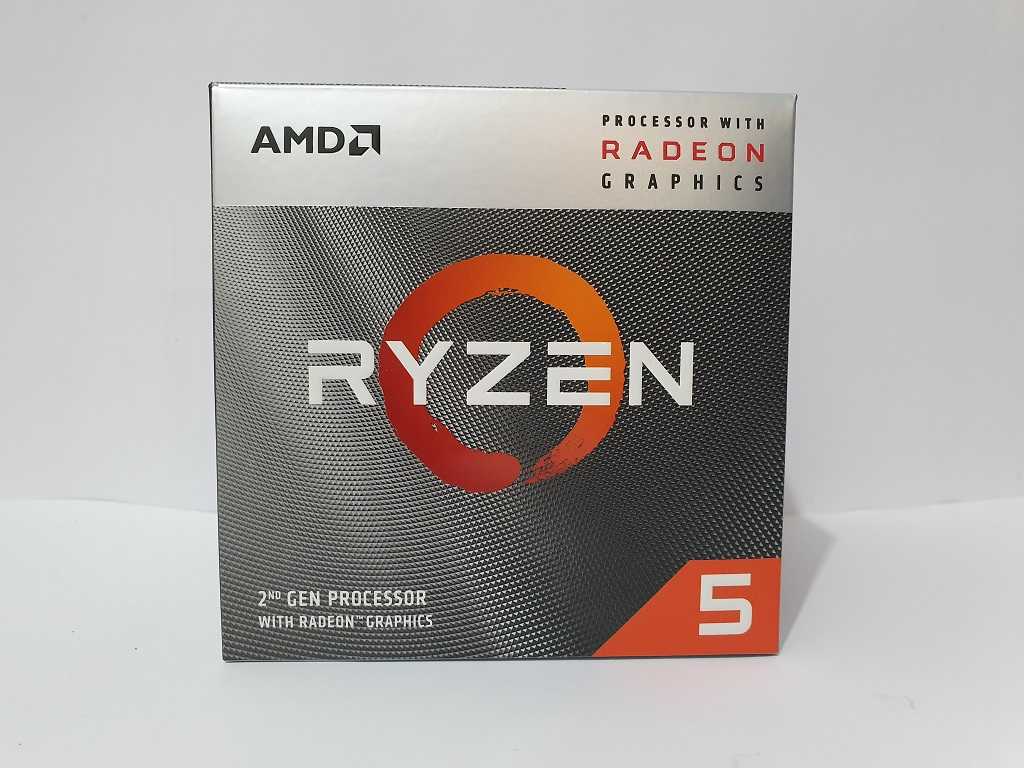 The Ryzen 5 3400G comes at a basic core frequency of 3.7Ghz and comes with a turbocharger to a maximum frequency of 4.2Ghz for a single core effort. Despite being branded from the Ryzen 3000 family, the packaging clearly states 2nd Gen Processor. This is because the processor on which the processor is based is Zen Plus architecture and not Zen2 on which it is based Processors Like theRYZEN 5 3600, theRYZEN 7 3700X etc.

This is mainly due to the design and construction time of these processors, which seems to be exactly one year after the design architecture of the main architecture. Next year, we are expected to receive APU processors in parallel with graphics-less CPUs that will be significantly stronger and based on the Zen2. It is not known which graphic core to choose AMD Placed in these processors. You may choose to stay with Vega but you might jump to various NAVI graphics cores, which you see on video cards like Radeon RX 5700 and others coming soon. 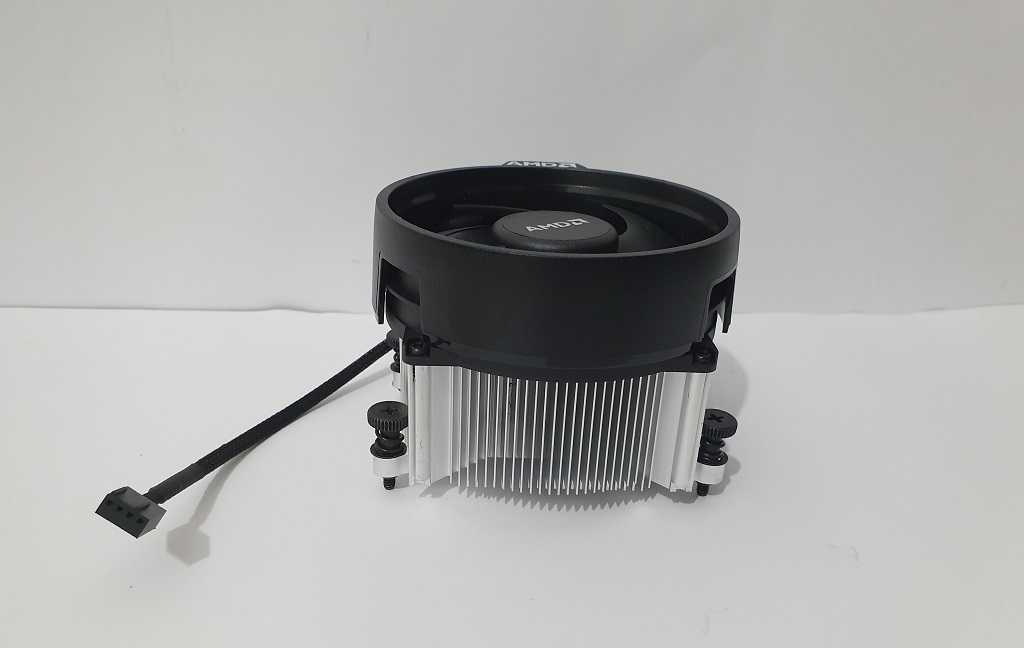 With the processor you get the Wraith Spire cooling of AMD. Cooling It is definitely worth having a quality fan made by CoolerMaster. This is an upgraded cooling over the Wraith Stealth that you get atRYZEN 5 2400G of the previous generation. 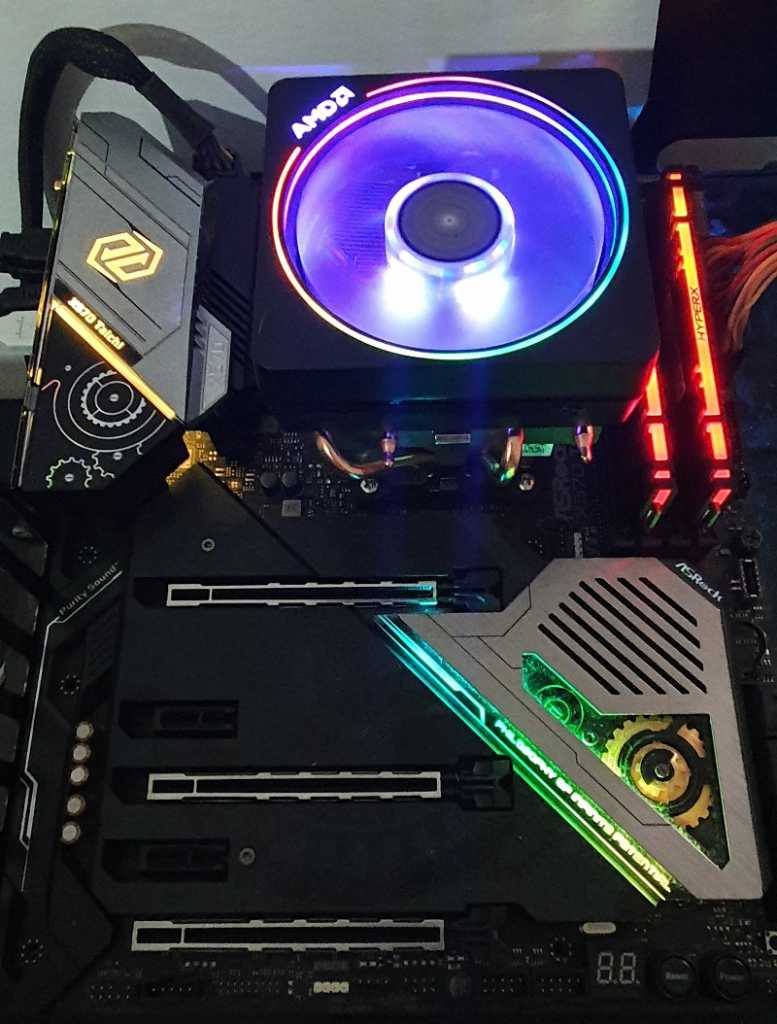 Specifically, for exams, we decided to use more advanced cooling AMD Available to us, the Wraith Prism. There is no difference in processor performance, as both refrigerants leave it at a fairly comfortable working temperature. On the motherboard, we exaggerated a bit, with X570 Taichi's ASRock. Admittedly, it does not matter to performance either. The main thing is that there is a connection HDMI screen.

Many talk about it working in the previous generation of APU processors. System memory is of the utmost importance for the processor's built-in graphical core performance. This is due to the fact that this graphic core usesDDR4 Of the system as a graphical memory, which does not exist זיכרון One that will, like him GDDR5 או GDDR6 Who see video cards.

In fact, the biggest engineering challenge currently in the world of built-in graphical cores is the provision of sufficiently fast graphics memory for satisfying 3D performance. In the exam system for this processor we decided to use a memory kit that is not considered to be very fast, but halfway through the entire spectrumDDR4 currently. 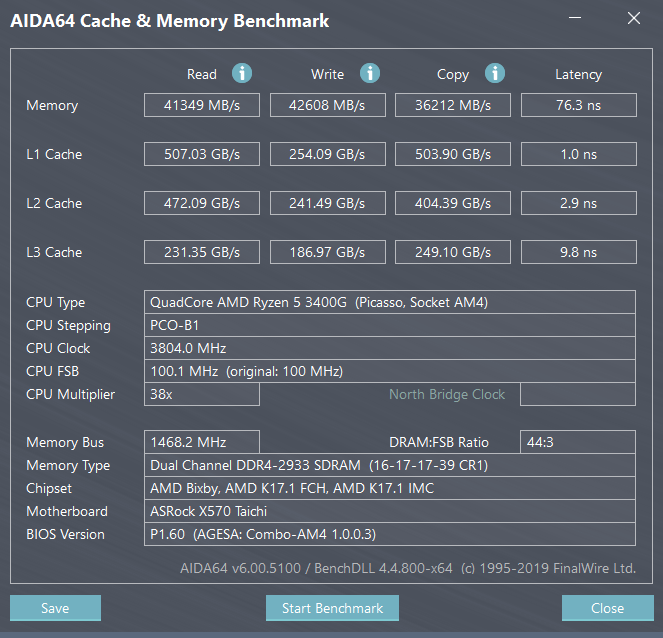 The Kingston HyperX Predator RGB installed on the system is memory DDR4 Quickly 2933Mhz and CL16-17-17-39 timings. זיכרון Such is considered relatively cheap and achievable for the APU system. Specifically, the frequency of 2933Mhz is the highest formally supported by the processor. You can also use 3200Mhz memory most often without any problems. Beyond that, the chances are significantly lower.

To understand the ear and understand what it is, let's talk about the speeds of traffic זיכרון Graphic compared to the graphic core itself. As you can see in the picture, we measured maximum read speed of about 41GB per second This memory system includes two 8GB sticks.

Adequate graphics memory traffic allows the kernel to enter itself with important computational information for rendering a 3D scene. Exactly 10 years ago when the Radeon HD 5800 video cards were launched AMD, They contained graphics memory traffic of 153.6GB per second. Six years ago when the Radeon R9 290 series launched AMD, These cards contained 320GB traffic per second. MemoryDDR4 The fastest that can work with the APU processors can deliver between 45GB and 55GB per second of traffic. At the forefront, we need a lot more than that to achieve performance comparable to serious video cards.

Nonetheless, the Vzen 11 core of the Ryzen 5 3400G processor stands at the forefront of built-in graphics cores in resident processors. Its memory frequency as mentioned is the frequency ofDDR4 In the system, and the core frequency itself is 1400Mhz in maximum effort.

What things can be run with such a processor? 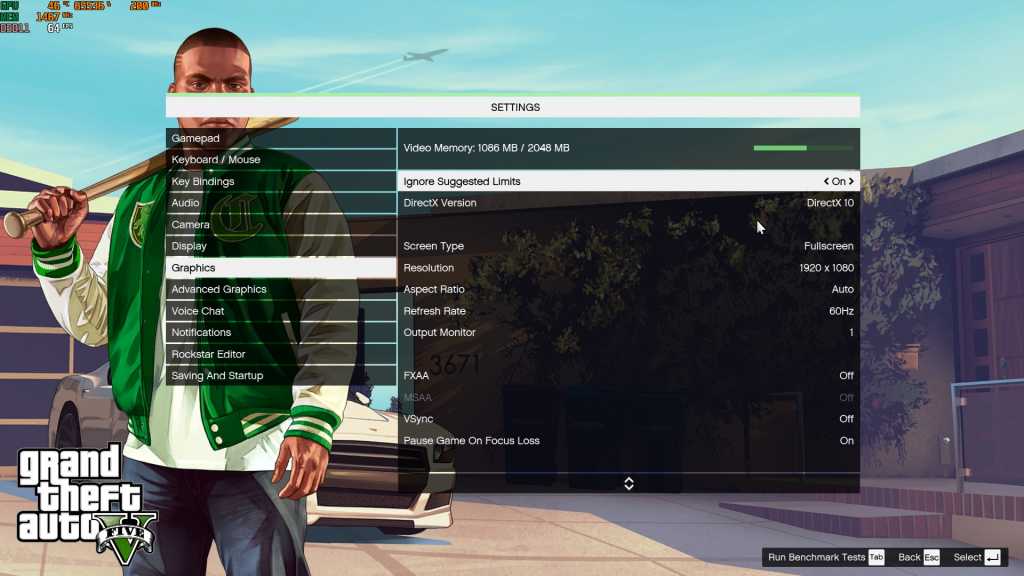 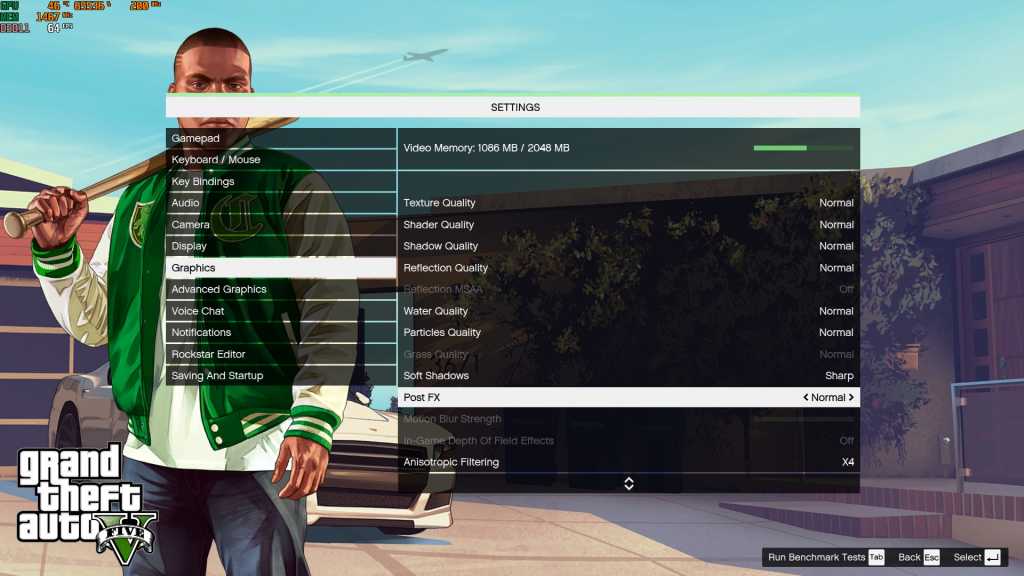 GTA V is also a fantastic example of an unprecedented optimization game that allows for a fairly smooth FHD gaming experience under basic settings. The display quality is similar to what you will get on the PS4 or Xbox One. Very respectable.

The Witcher 3 is an example of a heavy game that is unfortunately hard to enjoy with the 3400G. This game is considered relatively easy for graphic cards Cheap today like RX 570 or GeForce GTX 1650 but the frame rate per second is not very stable and there are frequent falls to single digit mode.

Another easy game that gets the 3400G in love is Diablo 3, which under medium banks along with High Texture is approaching 60FPS regularly in FHD.

Other games that will fit but not appear in the video will be Fortnite and World of Warcraft. If they can be run in FHD under medium settings and get 60 frames per second. All of these are of course used in demonstrated memory. זיכרון Faster example 3200Mhz CL14 kits will be able to "squeeze" about 3-5% more performance for the most part.

Of course you can talk about older 3D titles, ones that came out five years ago and it would be relatively easy to run on such a processor, such as Bioshock 1-2 or Call of Duty 4-MW3. There's also the indie gaming world that enjoys such processing power. Games like Minecraft are also tailor-made for such 3D processing power. The Vega 11 in Ryzen 5 3400G shows similar capabilities to GT 1030 GDDR5 and GTX 650. Games that require graphic cards Such a minimum would also fitVega 11.

So, how much is such a processor worth? Who is his target audience?

Well, the Ryzen 5 3400G costs about NIS 675 per consumer in the country, and at this price you get the heat sink. The target audience is clearly those who want to avoid the state of purchasing a video card in order to perform actions that need 3D graphics acceleration. Today, in the desktop environment, everything is actually getting accelerated Core Graphically, both browser and software like Powerpoint.

The Ryzen 5 2600 processor that contains 6 cores configuration and 12 capillaries is similar but does not contain Core Graphically included, by comparison. Therefore, the user is required to add about NIS 200-300 in order to get a recent graphic accelerator for the various tasks. You can say that the financial difference makes quite some sense compared to what you get. 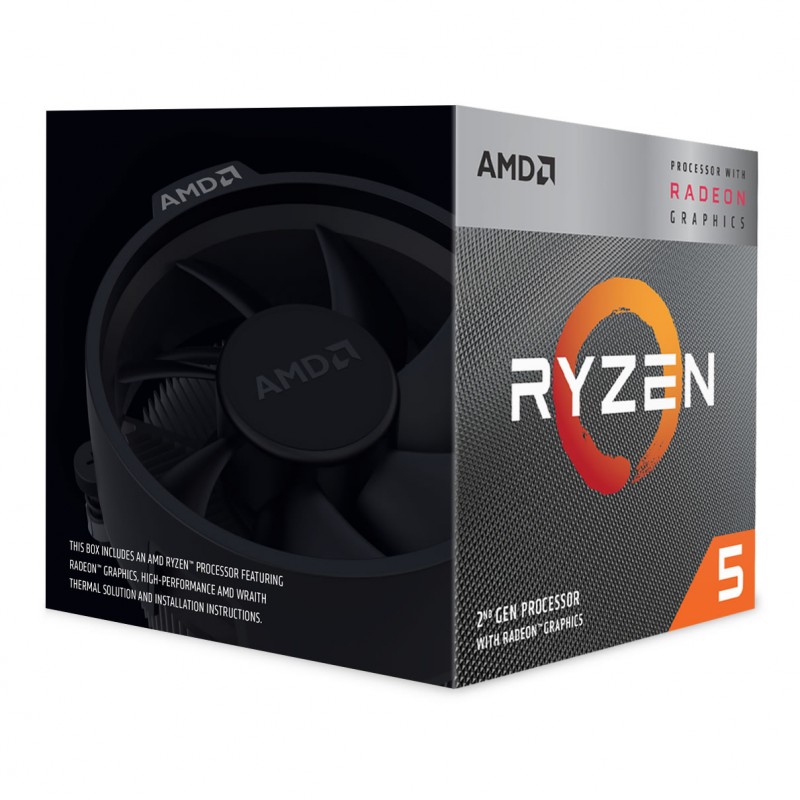 AMD continues to improve the cost-benefit ratio. What you get here is a processor with a very respectable processing power, somewhere in between Core i7 and 4790 Core i7 6700, along with a video card worth NIS 350 and great cooling in one package at a cost of about NIS 675. Such a processor can be a great solution for home theater computers in small enclosures as well. We know thatASRock For example, there is a particularly compact enclosure that can accept this processor and create a very powerful computer system at a tiny volume.