The time has come for a new Extreme Platform from the Camp AMD. Today officially launches AMD New series of Processors They have extremely high cores, and with them comes a completely new platform, the motherboards that replace the TR4 and the X399 chipset.

One of the new hardware giant's motherboards Asus Come to us and we provide a slightly more technical view of the details and features that this motherboard can obtain. Meet Prime TRX40-Pro. 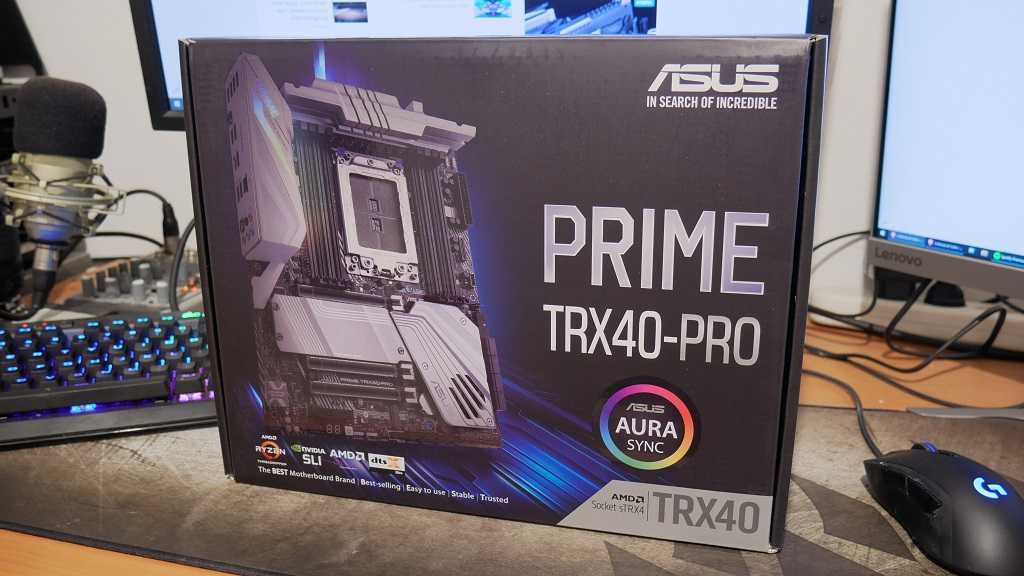 There are three motherboards available starting today from Massus on the platform TRX40. One board is theTRX40-Pro. 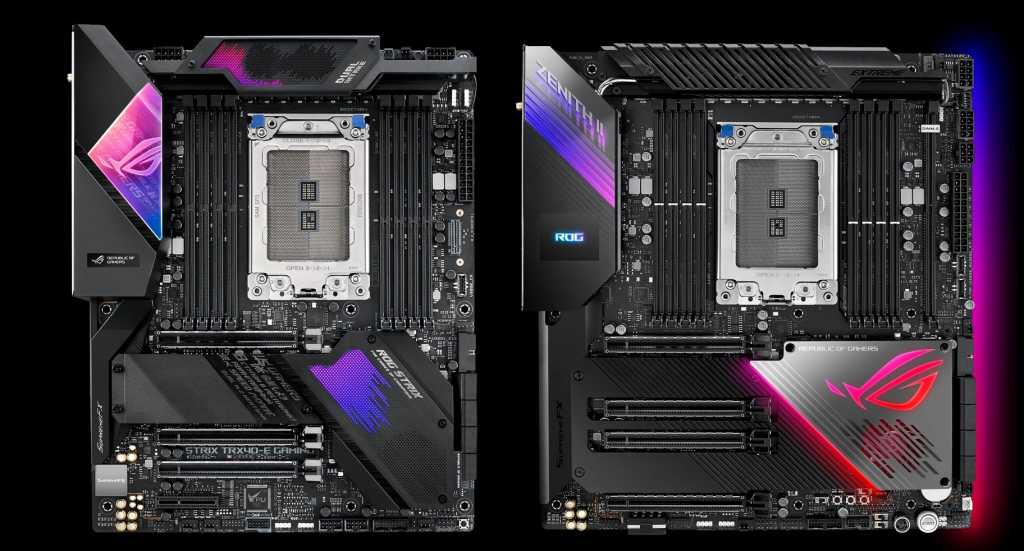 The TRX40-E Gaming is similar in its components to Prime and mainly gets different colors, and the Zenith II Extreme Which is considered the most advanced, and also rises accordingly with a tool Overclocking Extremely advanced. 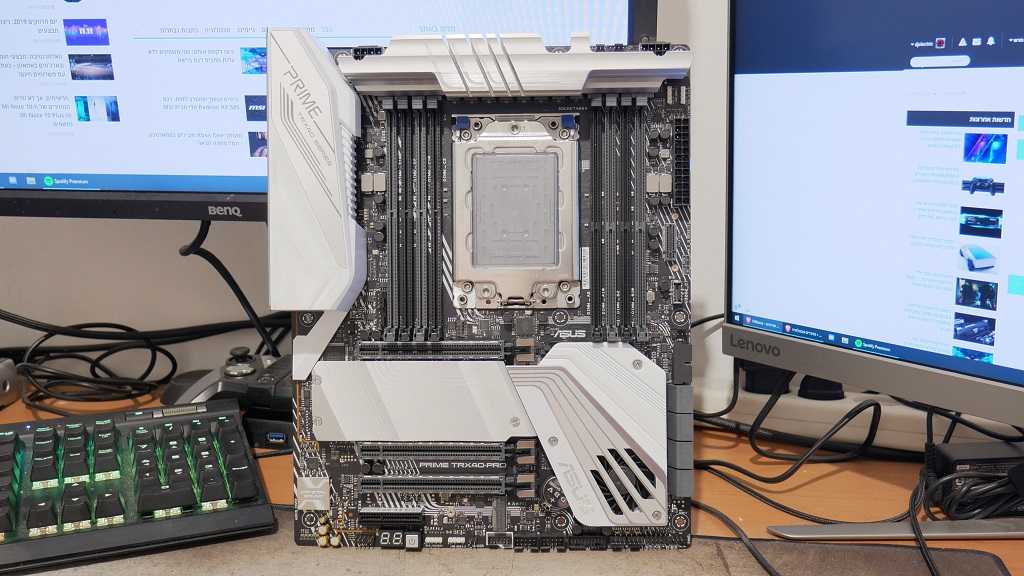 The TRX40-Pro mainly came to work. You won't find RGB on the board here and a host of gaming gimmicks that a work computer really needs. The TRX40 platform like its predecessor contains eight memory interfaces in four channels. The total memory space that the board supports is 256GB type DDR4, Which is 32GB per stick זיכרון.

The TRX40-Pro also has four interfaces PCI-Express For expansion cards. Three of them at full X16 and one bottom at X4. All are standard 4.0 without exception. 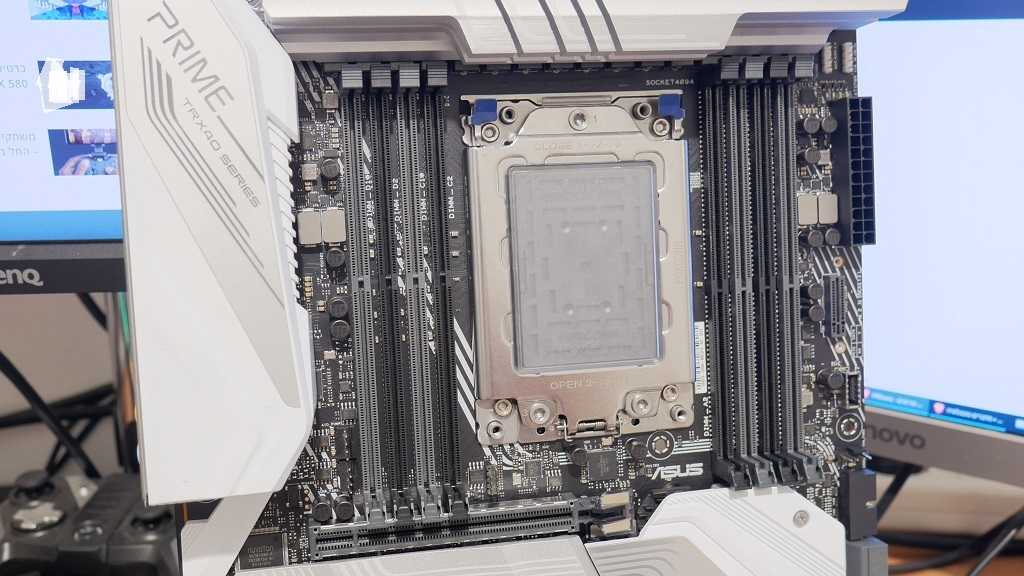 The bracket itself, TRX4 is identical in size to the previous generation TR4 bracket, but no compatibility Processors Among the residency included. There is also compatibility between the heat sinks so that all Cooling The TR4 bracket will also fit the TRX4 bracket. 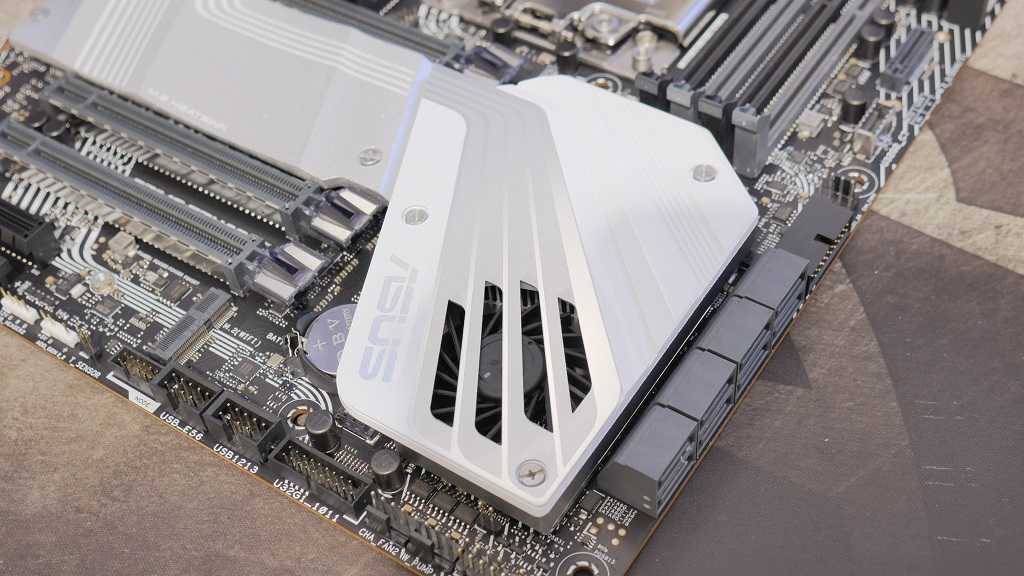 One of the most important innovations in this platform of AMD It's all running on PCI-Express 4.0, compared to the previous 3.0 generation. All physical PCI-Express and M.2 interfaces for drives SSD, Everyone without exception operates on the 4.0 generation so if there is appropriate hardware the support is available.

Not only is a new and fast device, but also the processors that come to this bracket contain a huge amount of such traffic routes. The TRX40-Pro comes with three M.2 connections that support PCI-Express 4.0 X4 for drives SSD. This is in addition to eight standard SATA 3.0 ports for drives. There are no interfaces that turn off other interfaces while in use, everything is available at the same time. 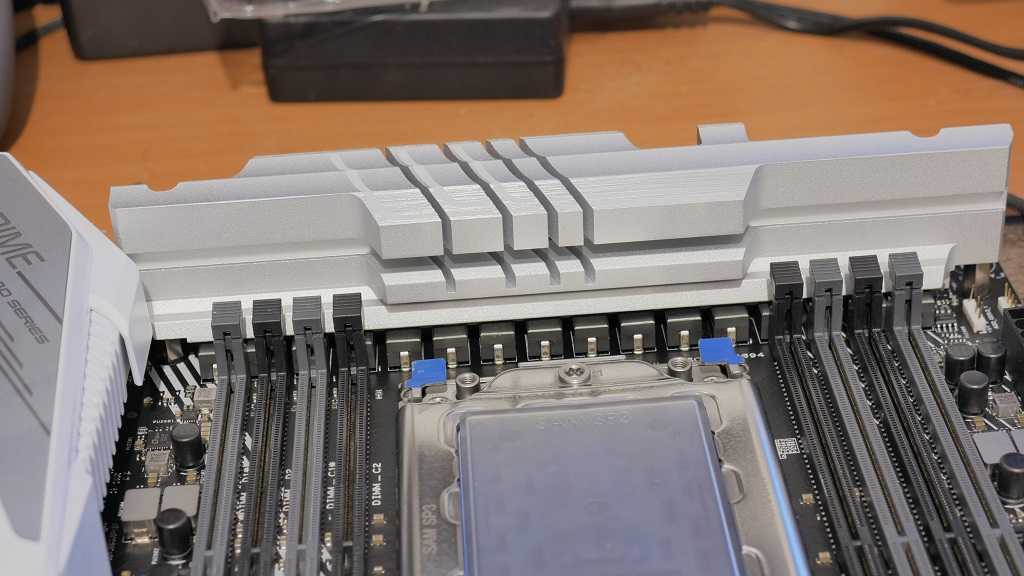 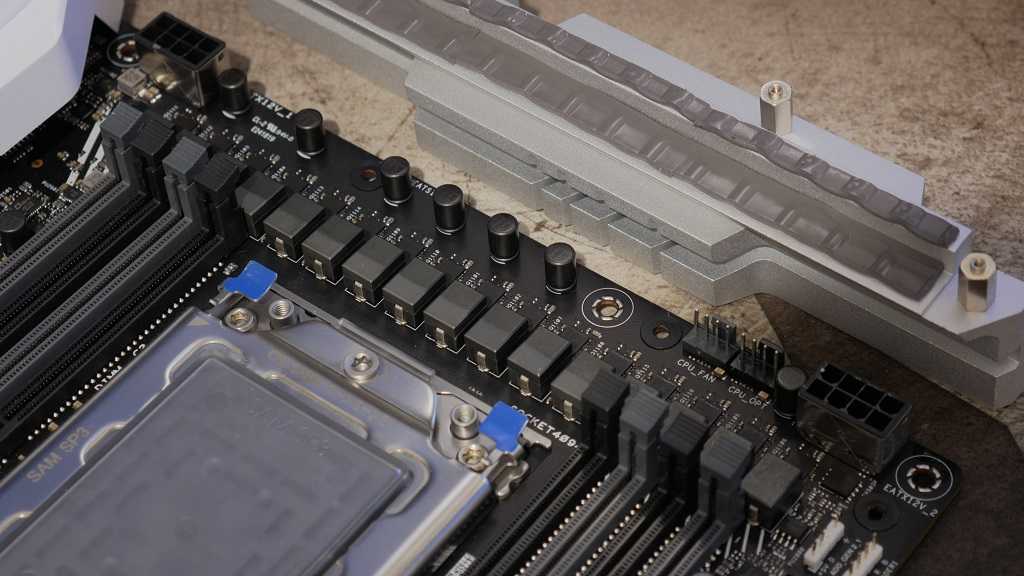 16 of the same power supply stages are above the processor. They provide tension to the processing cores themselves. The voltage stabilizer model is TDA21462. This is a stabilizer that is set to work at the maximum current of 60A when its peak efficiency passes in the 20A area. With a system that has a maximum current of 960A and a current request within the range of 175-250A from the processors to this bracket, the ratio is definitely right on the part of Asus. This is a system designed to work close to the peak of efficiency when working with a processor, thus reducing its heat emission. 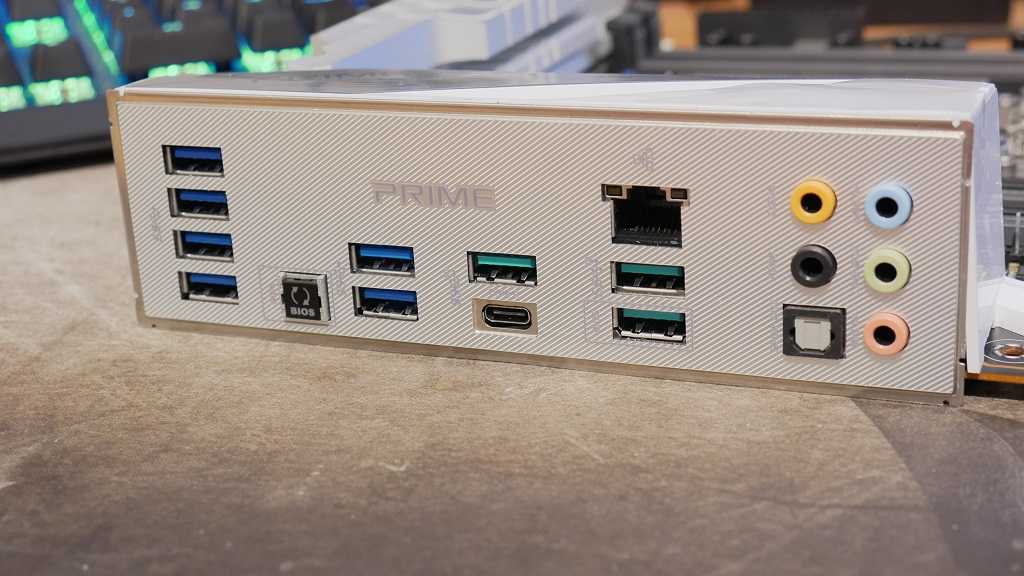 The rear ports on this motherboard are mostly what makes it the “cheap” among Asus TRX40 boards. There is 7.1 channels of sound coming from Realtek's S1220 chip, six USB 3.2 Gen1 ports, four USB 3.2 Gen2 ports (in Turquoise, including Type-C), a button to burn BIOS from the device Flash USB automatically and connection Network RJ45 is completely standard at 1Gbps speed. The amount of ports is respectable, but it would be nice if Asus would add a connection Network Another, maybe higher speed. 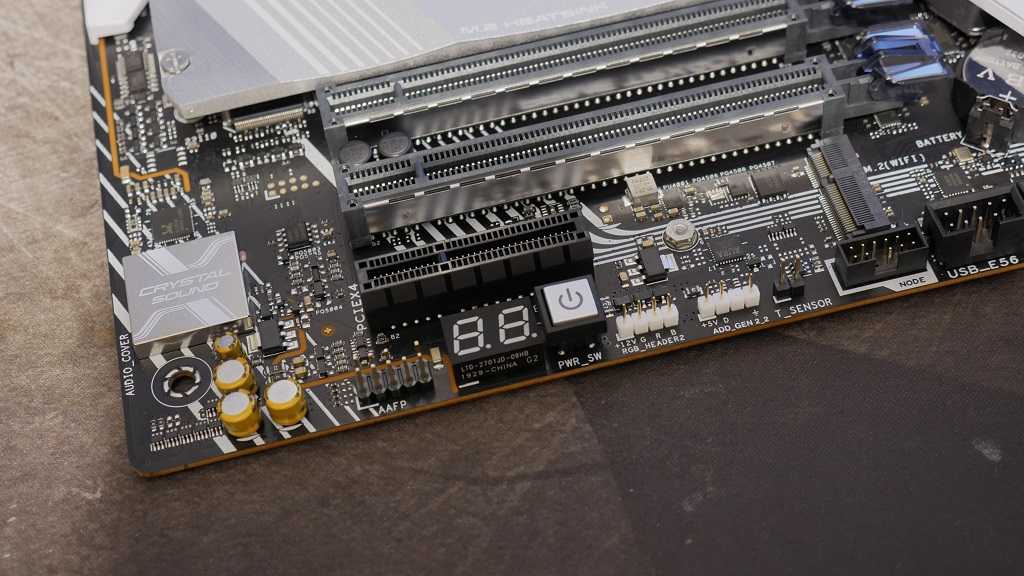 A nice addition to the motherboard is the power button on the board itself along with an LCD monitor for easy troubleshooting. Is there a glitch when it comes up? A number will be directed according to the instruction manual for the cause of the fault. In the picture you can also see the sound card built into the board, based on it chip Realtek S1220. One can expect quality Sound Appropriate for the vast majority of users. As you can see in the picture, theTRX40-Pro comes with a bracket designed for WiFi cards which is something I would love to see in many motherboards, given the low price of those WiFi cards.

If I have to summarize the TRX40-Pro simply, I'll say it Motherboard Quite standard plus a huge electrical system for the processor housing, which for many users is really all that is needed. There are enough tools Overclocking And troubleshooting that came along with the same electrical system. No problem at all in supporting and dealing with processors Threadripper 3960X has 24 cores andThreadripper 3970X has 32 cores.

The Prime TRX40-Pro's Asus Expected to be available in the near future for a recommended NIS 2,099 consumer price or about $ 400 in excess of taxes. I believe most of the price is embodied in the fast connectivity and the juicy power system.

Stay tuned, we are expected to bring more coverage on the motherboard in action and the TRX40 platform with processors soon AMD Threadripper New!