In this review we will look at an up-to-date desktop screen that claims to be among the most lucrative in its category, with some highly sought-after features in a sane price tag for a change - let’s find out if you can eat the whole cake and also keep it whole

The world of gaming screens has recently gained many models that go out into the world air and bring many features that were previously available in quite expensive products. The idea in gaming screens is quite simple. Such a screen should include a feature that appeals to its target audience in one way or another. Some would argue that bulbs too RGB Uselessness is something that can turn a regular screen into a "gaming screen".

While, of course there are serious technical features which a gaming screen can include. Among such features, also a high image refresh rate. In the not-so-distant past many gaming screens included a refresh rate of 120Hz, leading to a beat תמונות For a second of 120. Since then, we have managed to climb to 144Hz-165Hz, and in even more advanced and expensive screens, such as 240Hz.

Among other features are the same Gamers Asked over the years - image quality. True, gaming does not always require the accuracy of colors, lighting, or viewing angles. Still, monitor makers want to create what gamers want - a screen that can be used for more gaming soup.

To do this, one should understand that there is a rough general difference between the qualities of screens according to the type of panel, the type of display. The three most common types of computer monitors are TN, IPS And VA.

TN Is an inexpensive panel type, and the first to introduce high refresh rates for Gamers. Many of the cheapest LCD displays for computers today are based on TN panel technology.

IPS Is a more expensive and high quality panel than TN. Large differences between them are evident mainly in the possible viewing angle, when IPS Will usually allow a viewing angle of up to 179 degrees from the screen without losing color tones. A TN panel will sometimes lose color even from a relatively moderate angle view in front of a screen. Among the challenges IPS To become a gaming-friendly panel are high-refresh workflows along with fast response times on the hardware screen. Of course in recent years we have seen a significant improvement in these areas. IPS It is also a type of panel that invests more in its uniform illumination, and color accuracy in general.

VA Is a bit of both. A screen with a VA panel will contain improved viewing angles over those of the TN along with the ability to reach the transmission speeds of the TN. Admittedly, the response times of this panel are lower than those of the other two. Recently, here too an effort has been made to improve this figure. Colors from a typical VA panel will not be as accurate and varied as those of a panel owner IPS, But not far away. 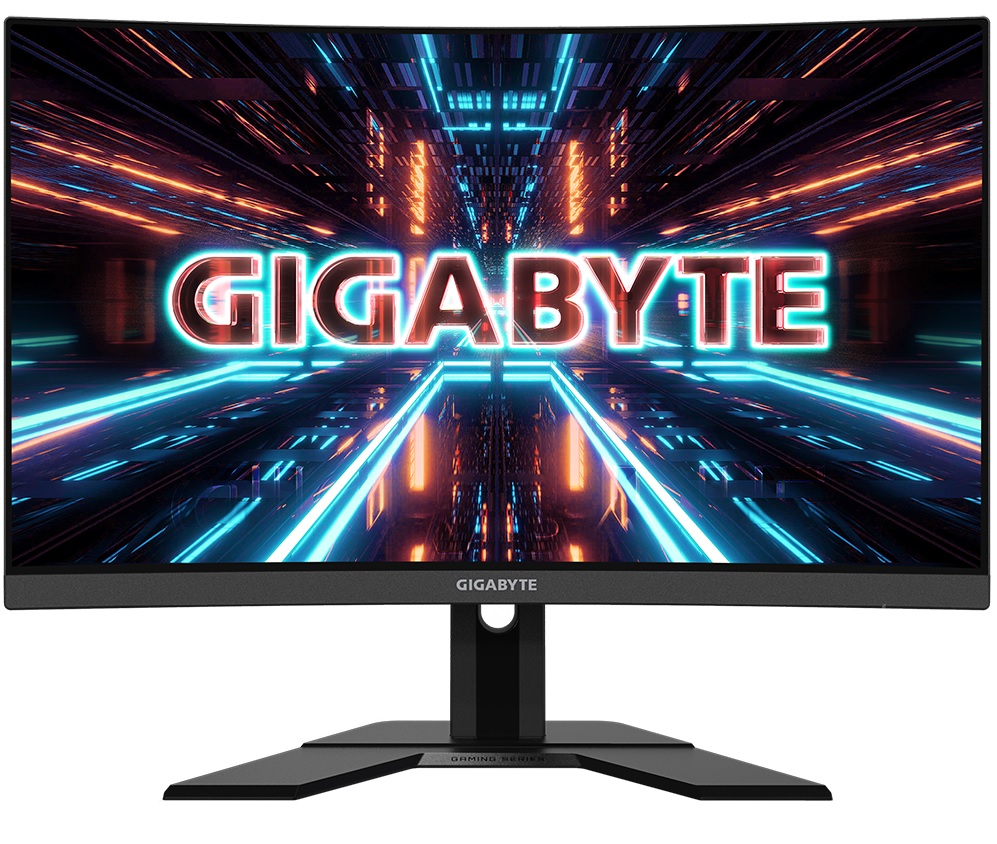 The hardware manufacturer's G27QC GIGABYTE Is a screen that comes to combine sought-after features with an acceptable and even slightly surprising cost in such a competitive market. Among its features:

This screen comes with a price tag of only NIS 1,600, which makes this set of features not at all common for a gaming screen. In the past, screens with such a set of features were sold for over NIS 2,000. The goal is to create a relatively accessible choice in this price tag. 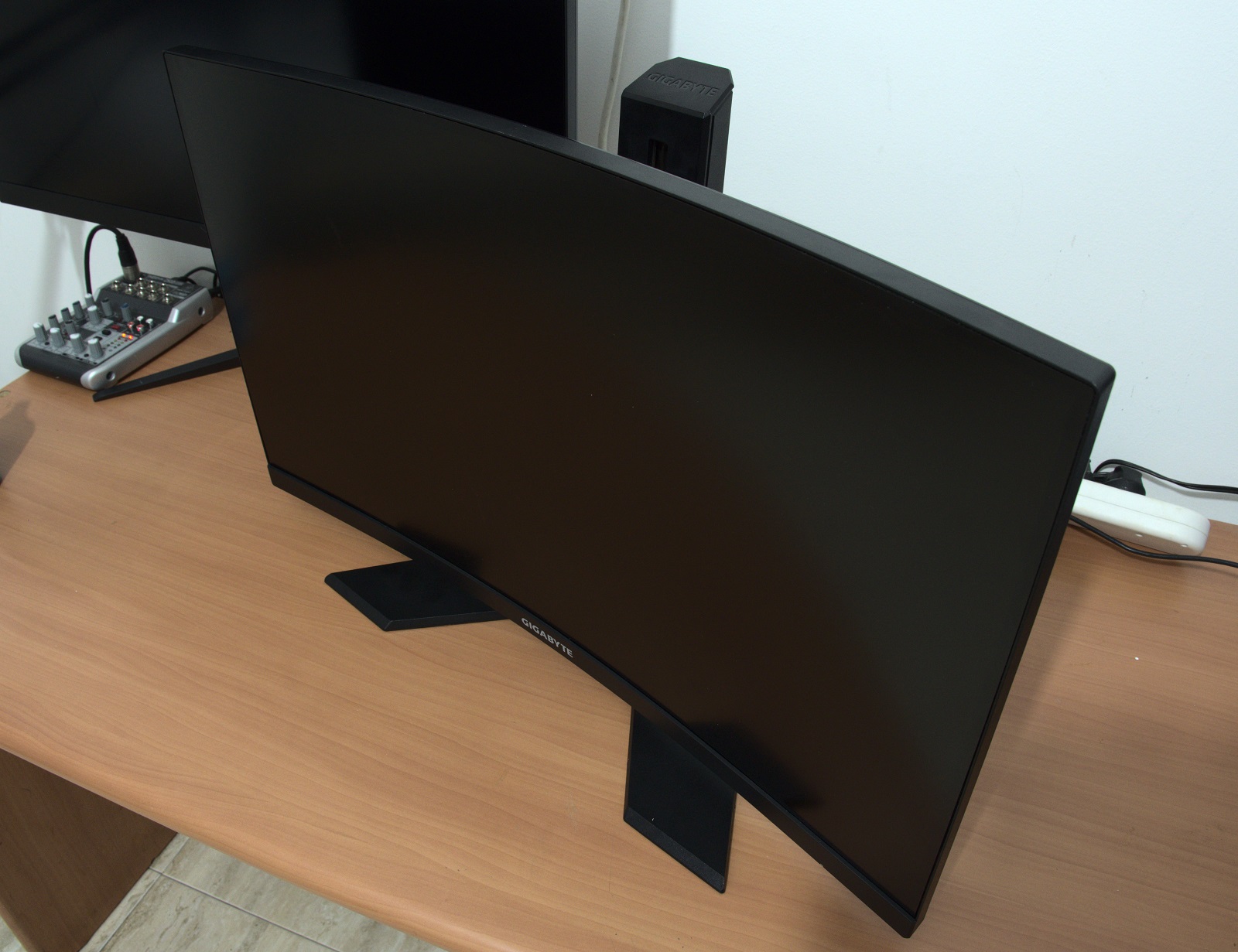 This screen is the first concave I have ever seriously examined and used. Naturally, adapting to something so different in a screen use experience is not something I particularly like. Still, I must give the experience a chance, because impression and experience is an important thing. This is a concavity at a 1500R angle.

A lower number means a screen with a narrower bending radius. 1500R is considered relatively narrow, as we are usually used to seeing concave screens in the 1800R-2200R. This means that in order to maintain the same distance of the parts of the screen from the user's eyes, he must be relatively close to the screen, which happens quite a bit in battle. Gamers Today anyway. 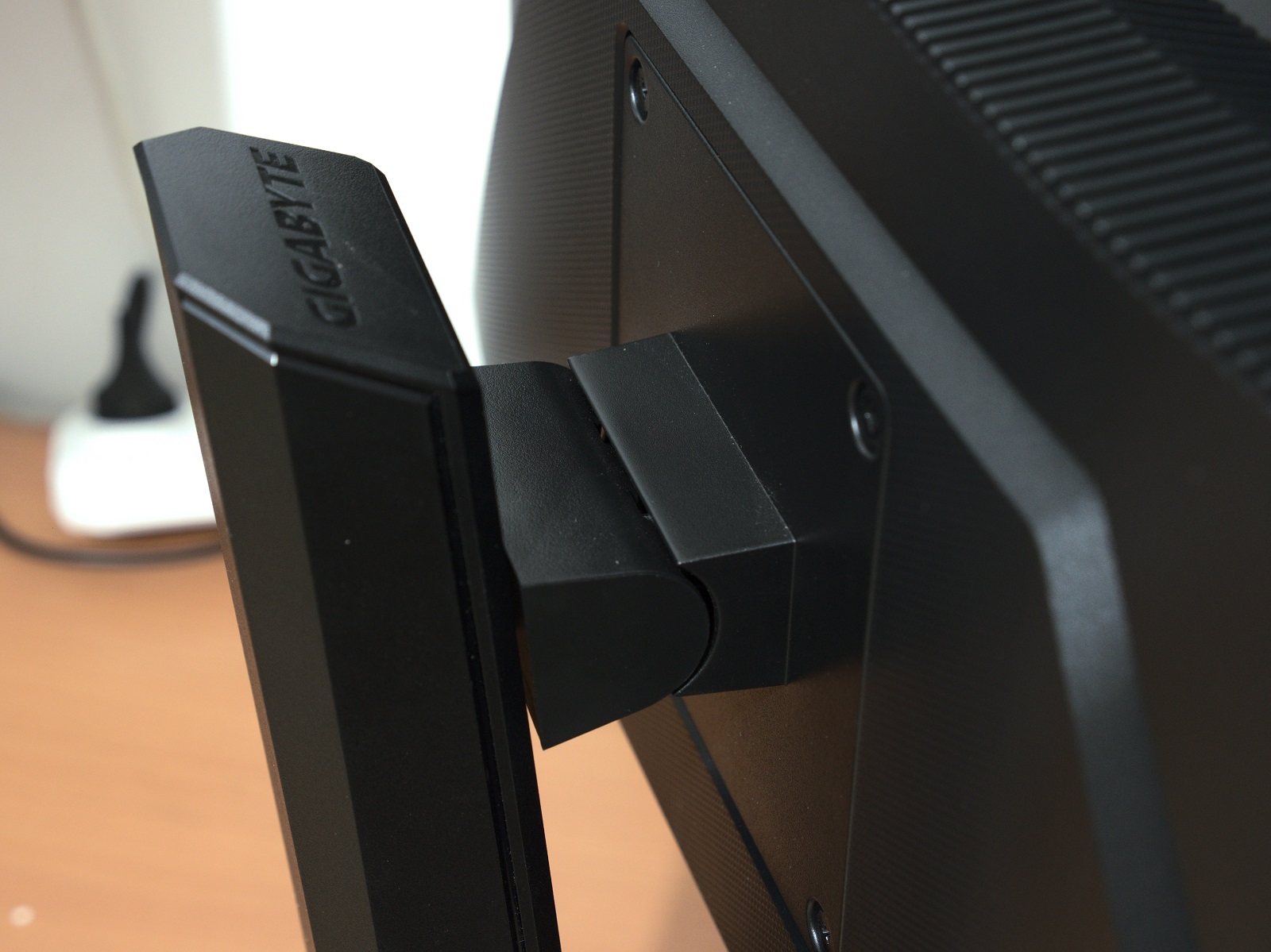 This screen has a relatively simple stand that is mostly made of plastic and internally reinforced with iron. It enables a function of raising and lowering, as well as a function of tilting up or down. No advanced functions like the ones found in more advanced gaming screens are found here GIGABYTE, Like theAORUS FI27Q for example. Other functions that exist in more advanced screens are rotation of the screen, and its identification to the sides on an axis. 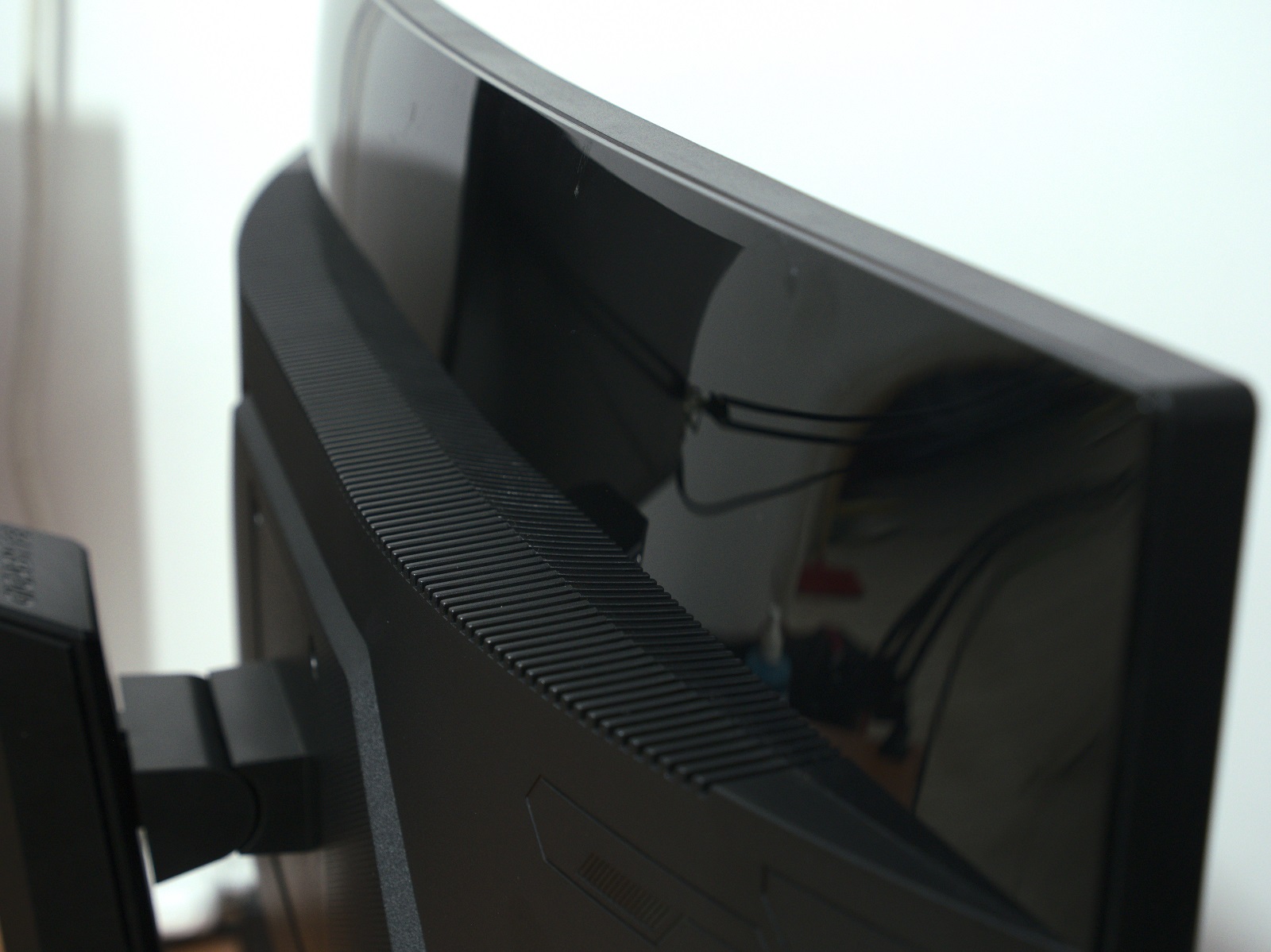 Through the air vents in the screen can come the heat generated in its components. This screen has a maximum power consumption of 70W during effort. Its power supply is internal and therefore only a cable for electrical connection is required. 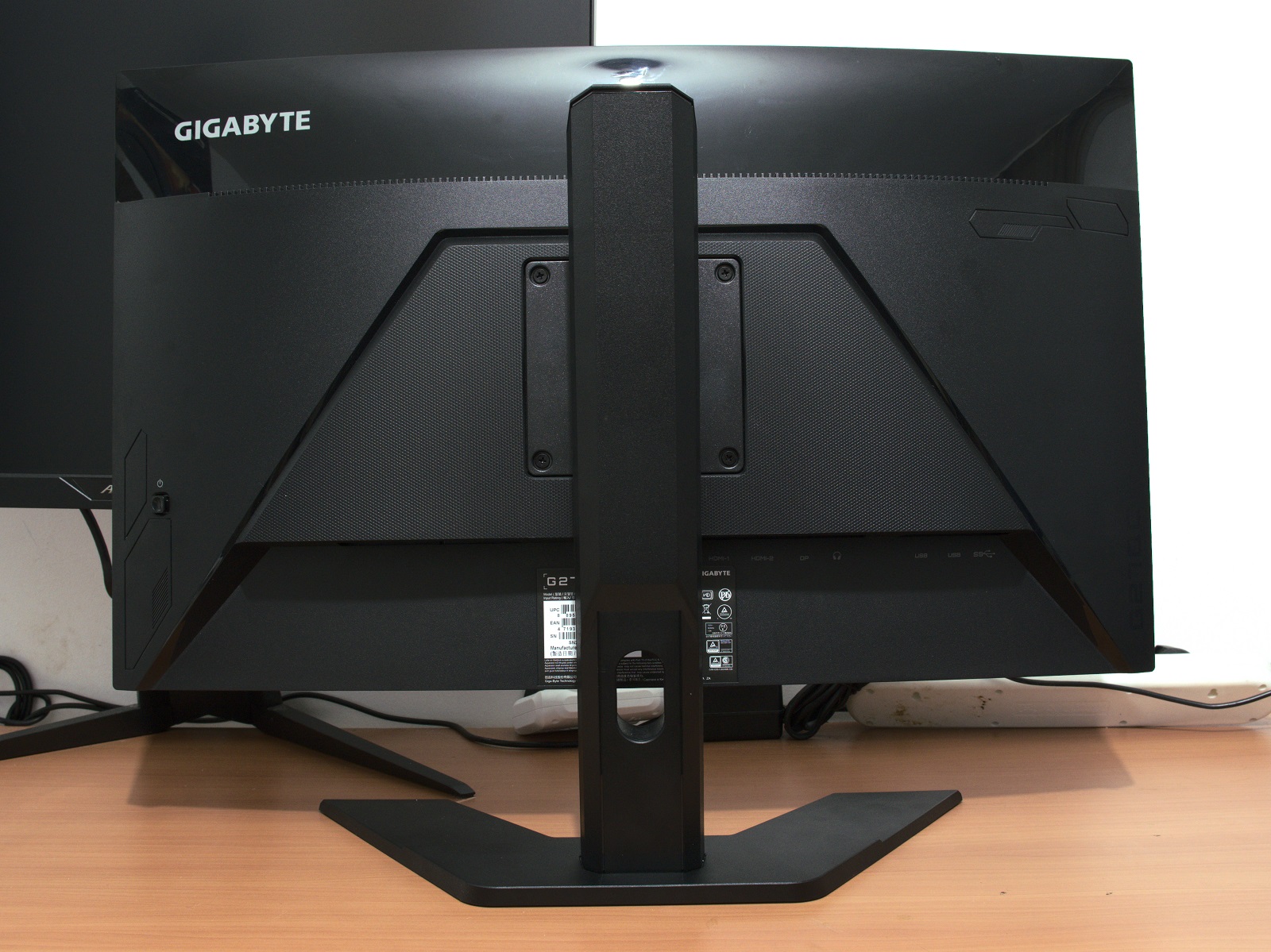 The screen stand is connected to it via a universal VESA connection in the screws, so users can purchase third-party stands if they want additional functions, or perhaps connect to an arm. 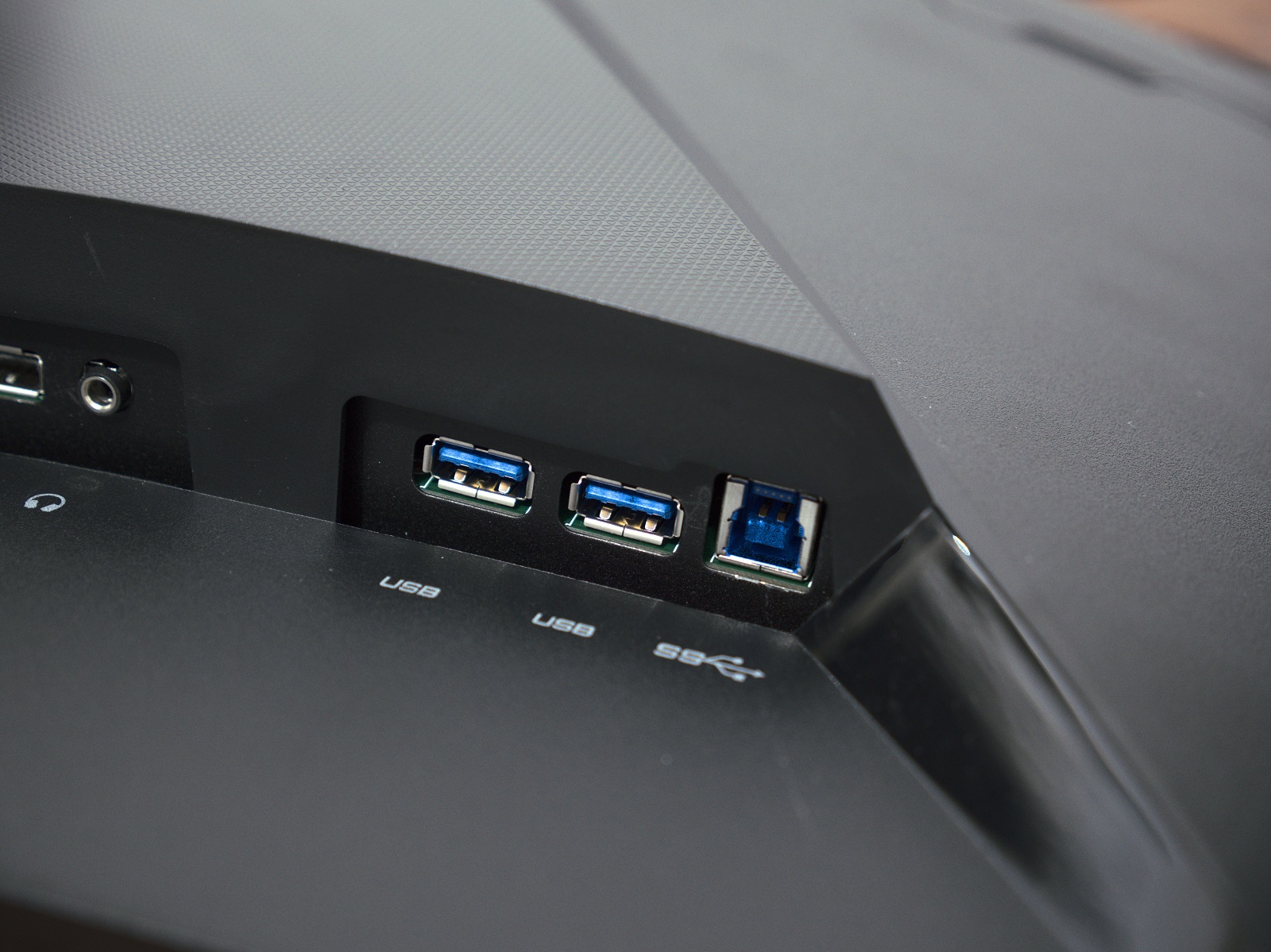 This screen has the option to get USB 3.0 cable from a computer and provide two ports that can be used for equipment such as keyboards, mice or devices storage External near the user. 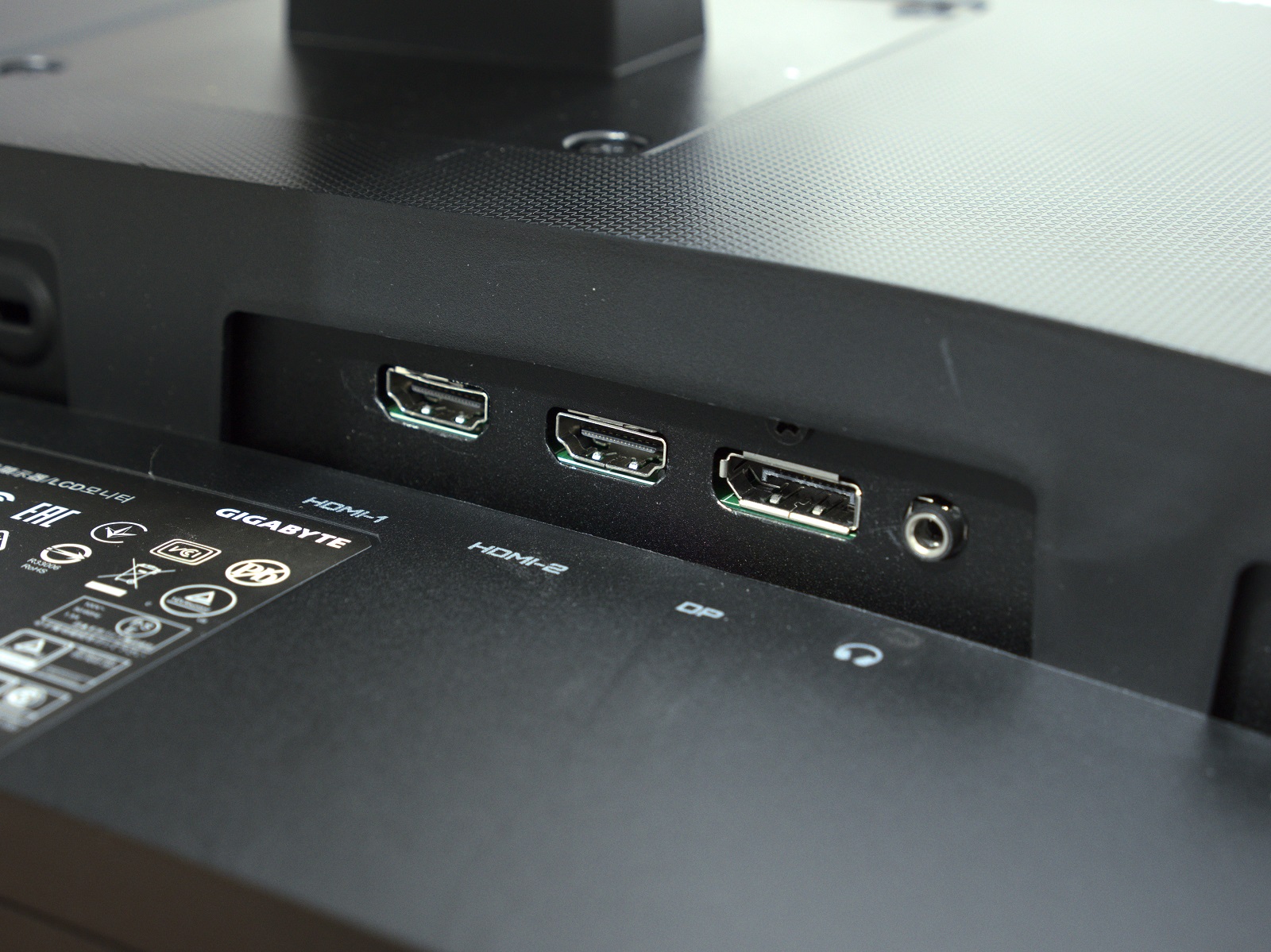 This screen can be viewed using DisplayPort In standard 1.4 or HDMI Standard 2.0. Both of these types of interfaces are capable of operating at 2560X1440 resolution and 165Hz. There is also an exit interface for headphones, as sound can be transmitted through the display interfaces. 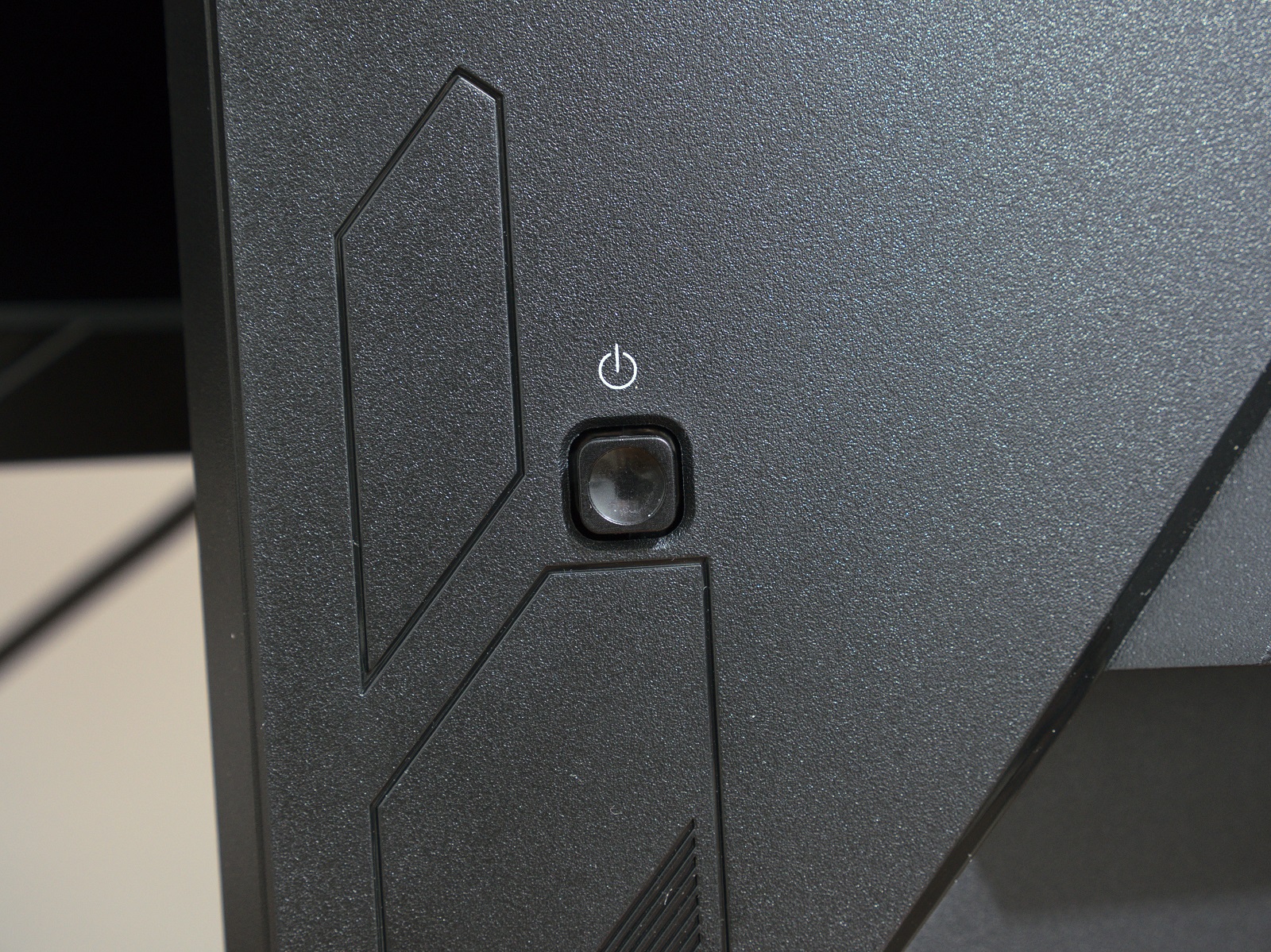 At the back of the screen there is a joystick that is used to navigate the various settings, as well as turn on and off by pressing. I am not a big fan of controlling the screen through a place that is not always accessible, when in case there is another screen next to this screen, sometimes moving the screen is a necessary thing, as in my case. The position on the FI27Q screen below the screen in front of it is a significantly better position. 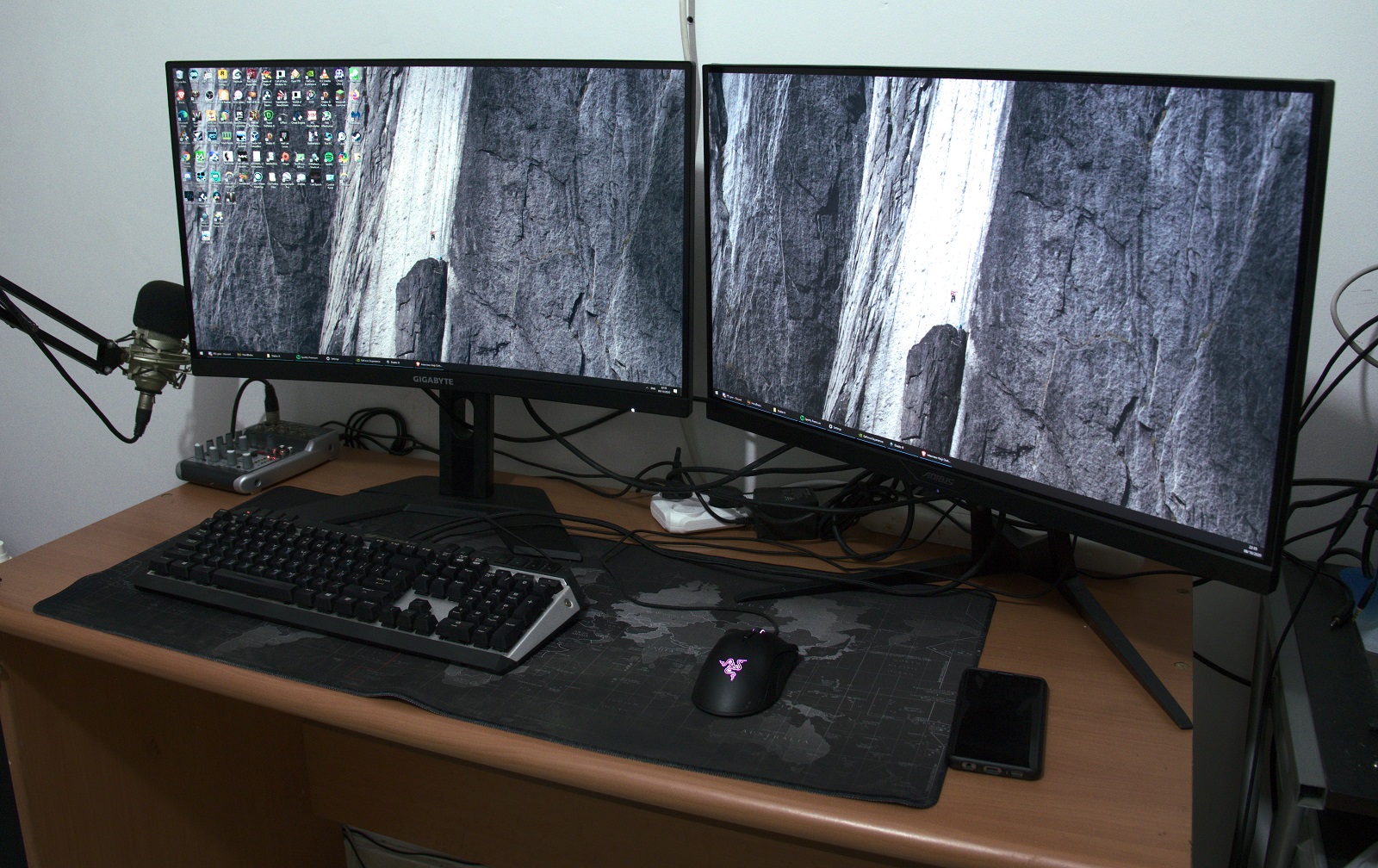 Compared to the G27QC I have a pretty good point of comparison with the FI27Q's GIGABYTE herself. This is a flat based gaming screen IPS Has the same maximum refresh rate of 165Hz. This comparison is interesting because the FI27Q on the right costs the consumer about NIS 2,500, while the G27QC costs only about NIS 1,500.

The first thing I must say is that adapting to a concave screen is a process that takes time. Laying a concave screen on the table, staring at it for a few minutes and then saying "it doesn't work" probably won't do the job. I forced myself for long hours to move from a mirror room situation in the circus to a situation where the picture made a little more sense to me, and I have to admit it helped a bit. However, such a process may require at least a few more days. I still find that looking at a completely flat screen is my personal preference. It is very possible and you will not have my adaptation problem there with the fact that the screen is concave in such a relatively serious way. 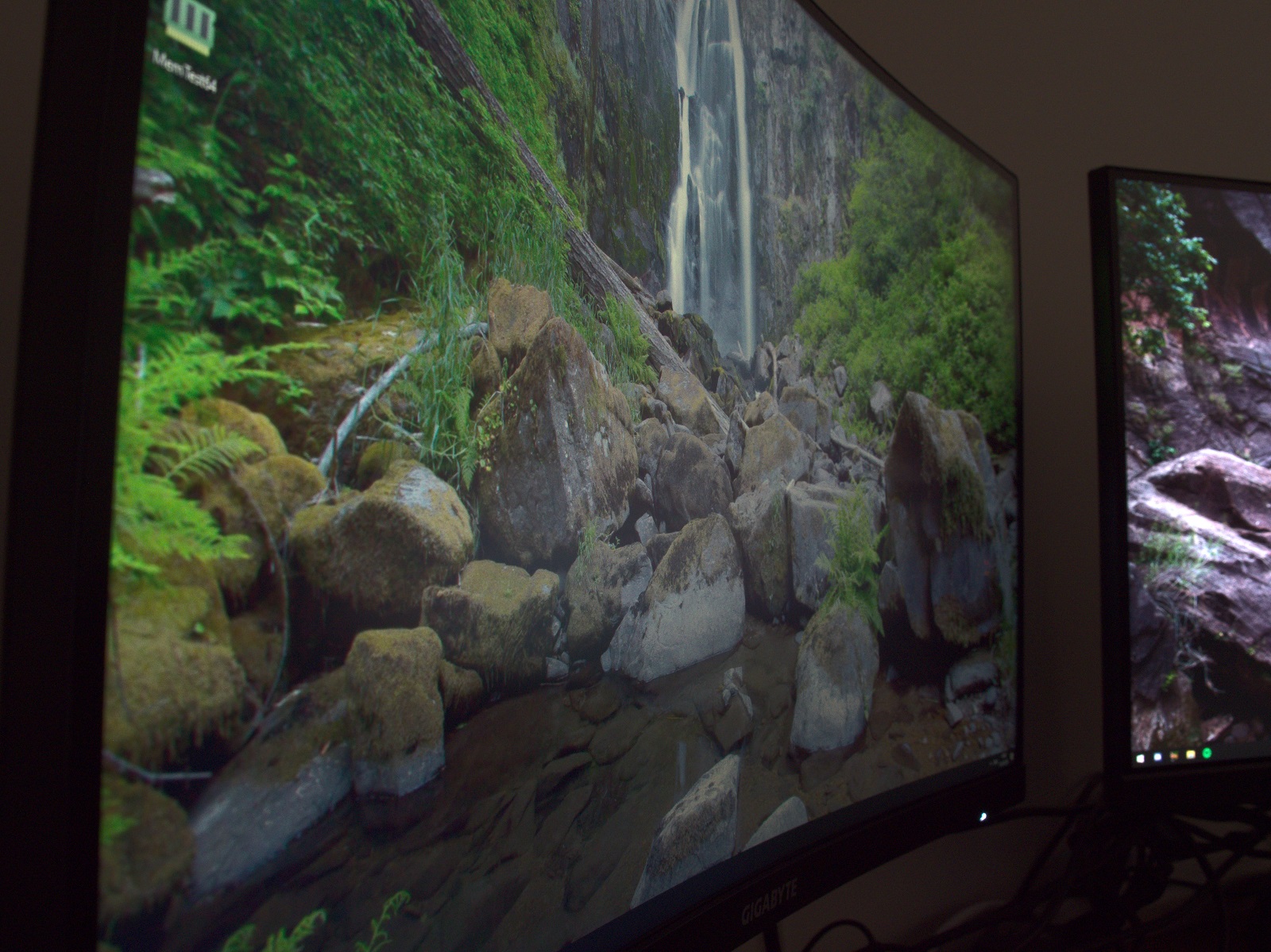 As expected, a sharp viewing angle still brings accurate colors to this screen, though the lighting uniformity is slightly compromised. Admittedly, even at an impossible angle the screen maintains a very good image. 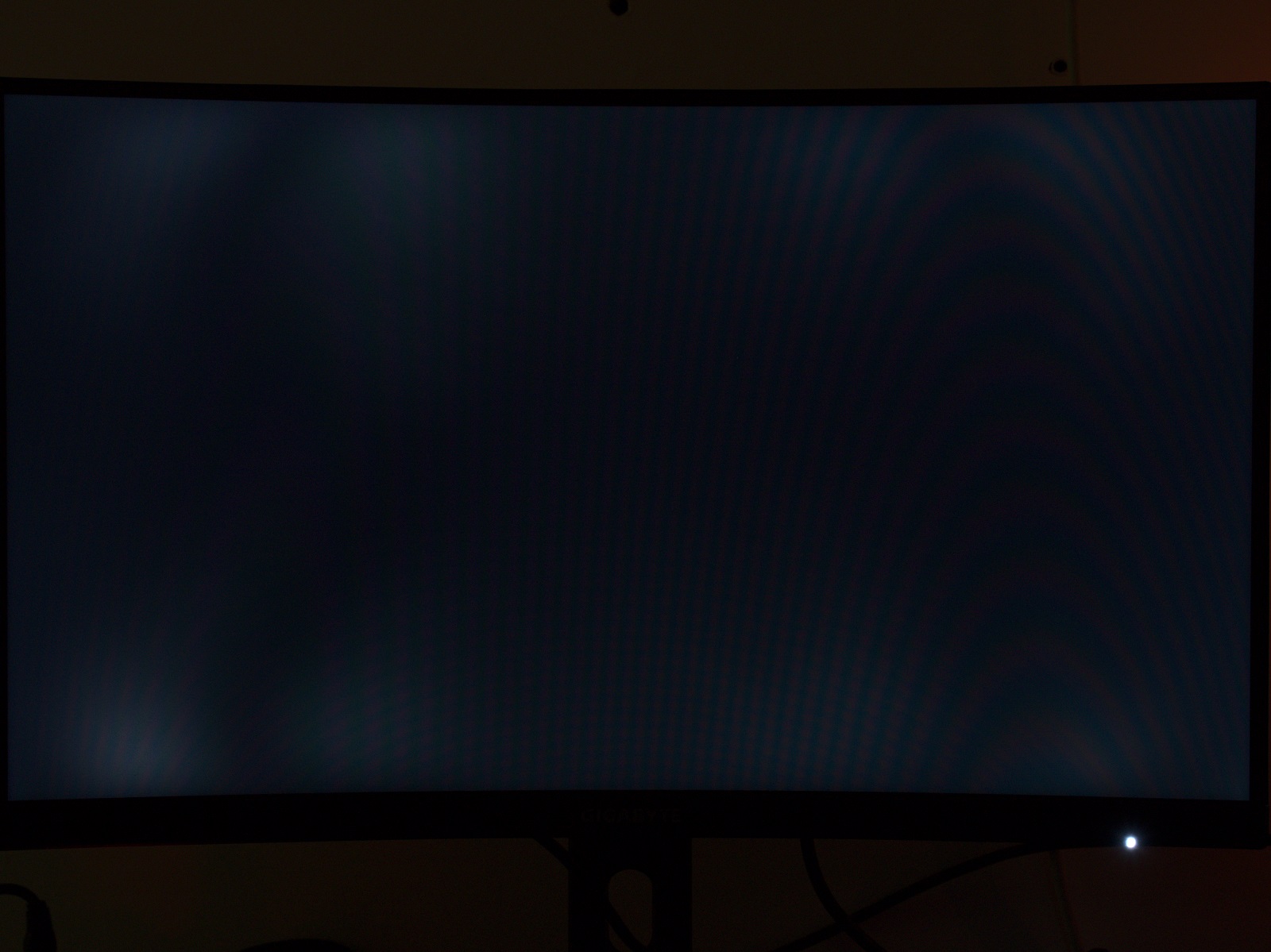 The backlight on this screen is not from the uniformity I have seen on computer screens, and even a little far from it. Some of the things that make such a screen relatively cheap are things like non-uniform lighting in cases, but this thing will stand out especially in extreme cases as you see here. 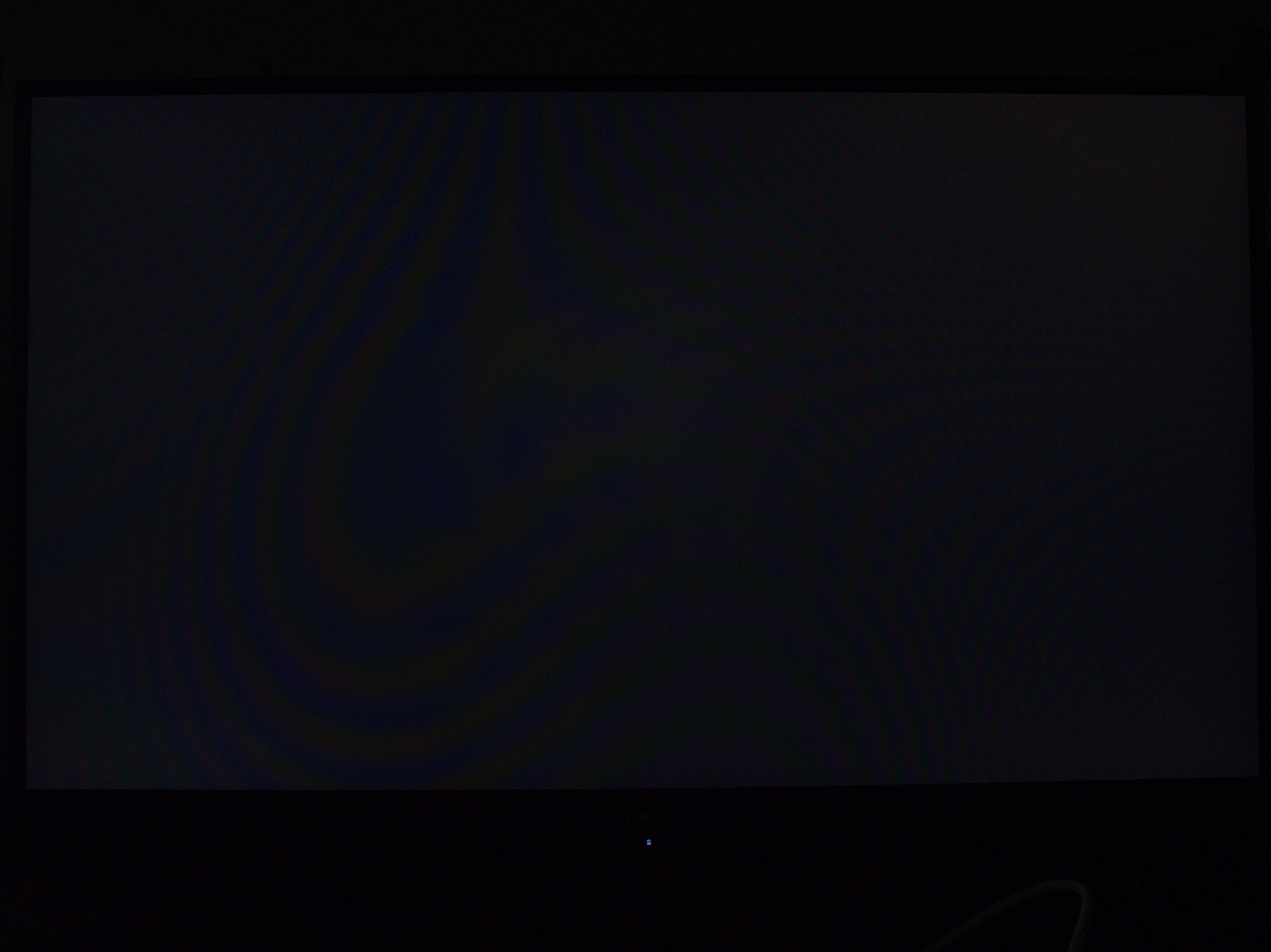 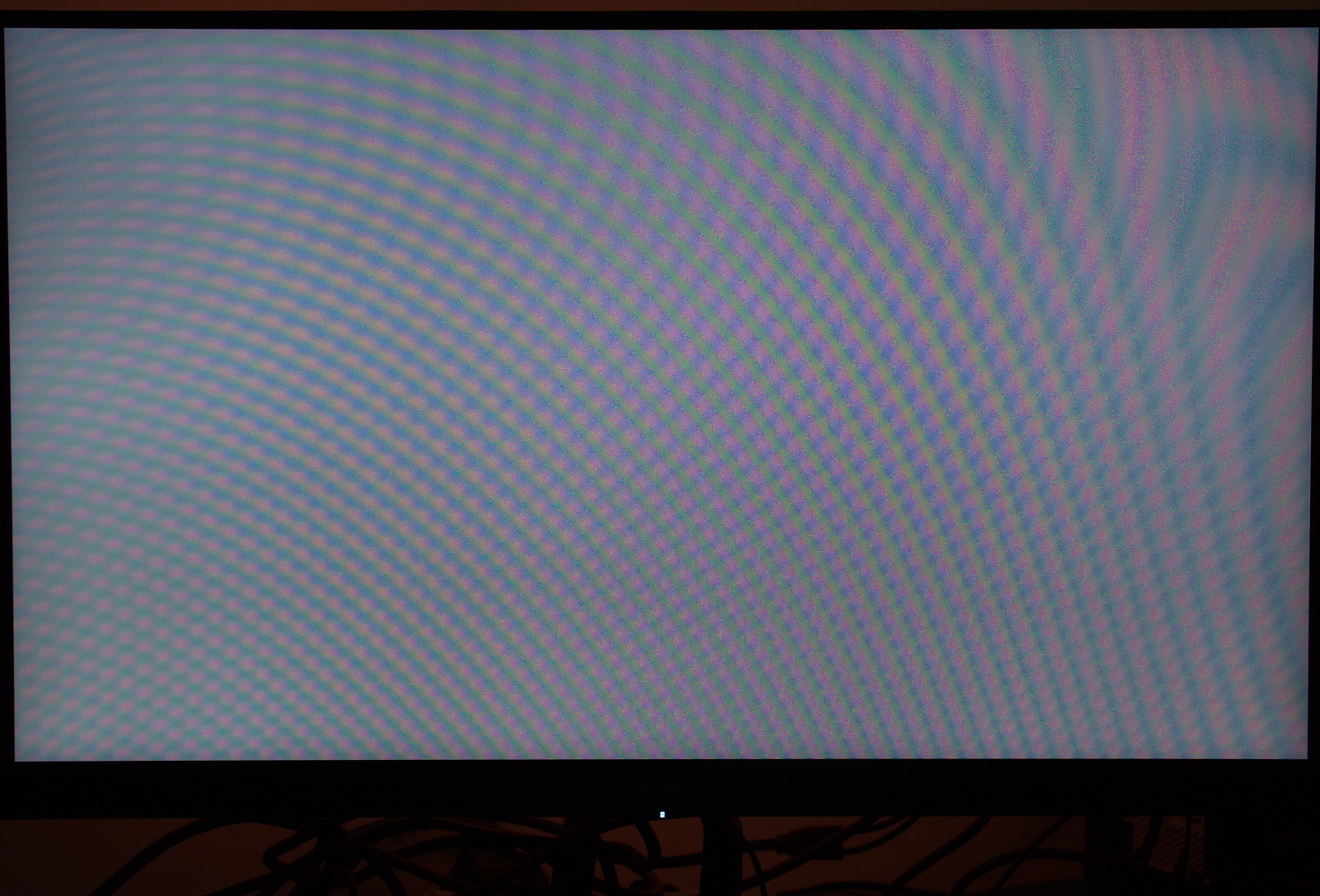 For comparison, the lighting uniformity in the FI27Q was significantly good, at all the brightness I just tried to highlight lighting areas. Still, this is a relatively unserious thing when it comes to a screen that is mainly used for gaming.

The UFO test is a good test for finding traces while in motion. A picture is taken at a fast shutter speed (1/1000 in our case) to see what traces the alien leaves flying from side to side. This indicates the speed of the pixels to change from one color to another. Both results are considered very good, even if that of the FI27Q is considered cleaner. Still, one screen costs NIS 2,500 while the other costs only NIS 1,600. You can find a large amount of the same effect called "Ghosting" on many VA and TN screens, so here the effect is relatively low.

Also from a subjective point of view and using a screen alongside another screen, the G27QC's performance feels very similar to the FI27Q's performance next to it, which I think is the biggest compliment I can give to this screen. 165Hz feels like 165Hz, and responsive and smooth gaming feels the same on these two screens.

Of course if productivity is treated as editing of Video In the photos, we go a little deeper into the niche for higher display quality than you will find in the G27QC. In relation to its price, this screen is at an excellent performance point, and it is possible that many users who built on screens like the FI27Q for gaming purposes will be able to save almost a thousand shekels and renew with the G27QC.

The user interface on this screen is the same as on screens GIGABYTE The others who use the joystick for navigation. You can adjust all the display settings here, or in addition do it through a really similar software program from the operating system using the cableUSB To the screen. The highest quality color profile for me was with 93% red, 95% green and 95% blue. The red is a bit strong, and this adjustment has arranged the color balance. 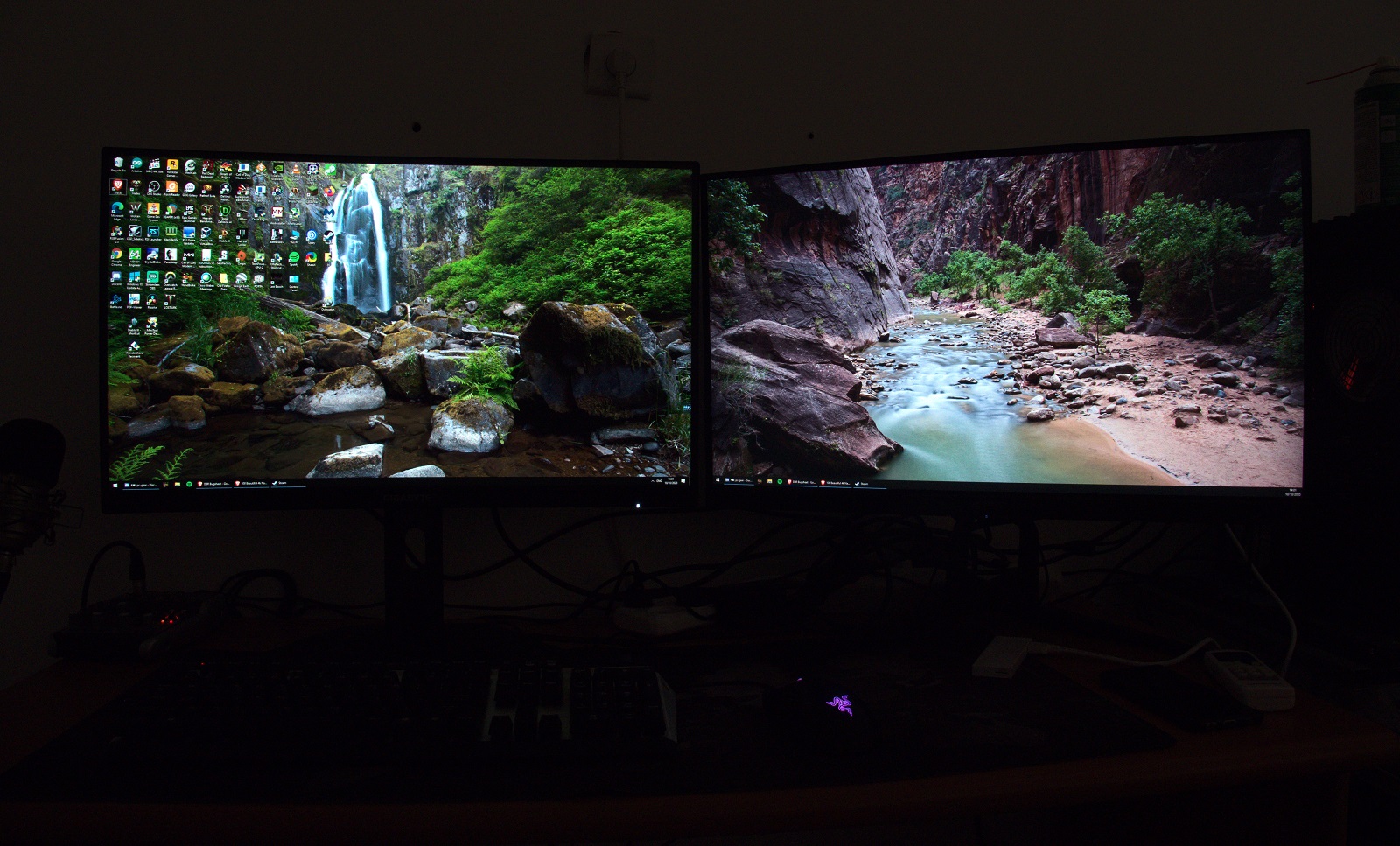 I can sum up my experience of using the screen by coming in with a lot of doubts and coming out relatively satisfied with the value. Significant price cuts mean cuts in features, and it is noticeable that the features cut between a model like the FI27Q and the G27QC are not the most significant for Gamers.

This screen easily joins HWzone's list of recommended products. The price is competitive, the brand is known to the public, and the value is excellent. Although the G27QC is not designed to serve content creators and graphic designers, it is a great screen for gaming with respectable resolution, advanced refresh rate and FreeSync support. AMD.