We have collected one of the advanced boards of the B550 chipset to see if it might be better than boards X570 Discounted? The conclusions inside

Summer is heating up and so is the hardware market with fresh produce. This time, another motherboard in the new chipset of AMD, The B550. To remind you, this chipset covers an extremely wide range of prices and advancements of motherboards for AM4's AMXNUMX chassis AMD. Motherboards with this chipset only support architecture-based Ryzen 3000 processors Zen 2 (meaning not 3200G or 3400G), and in addition will also support processors RYZEN Of the next generation which are expected to hit the world air in about half a year.

The popular hardware maker GIGABYTE Launched quite a few motherboards that start at another $ 95 and reach a height of $ 279 with the B550 model ship AORUS MASTER. In this review we will focus on a slightly less advanced, but significantly cheaper model - the B550 AORUS PRO 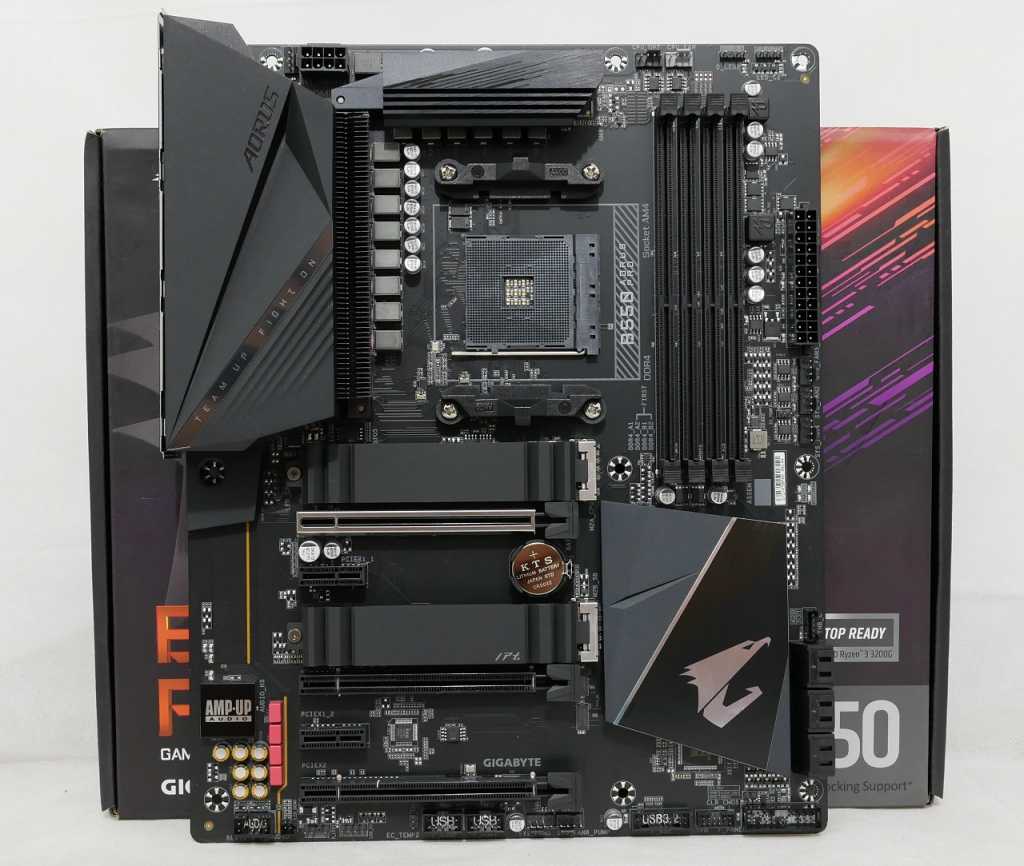 The B550 AORUS The PRO is the model below the flagship of this generation, and costs $ 100 less with a $ 179 price tag. In Israel, the motherboard began to be sold at a cost of about NIS 900. This price means it enters the territory of boards X570 Cheap. Later in the review we will discuss the question of how it compares to these tables. 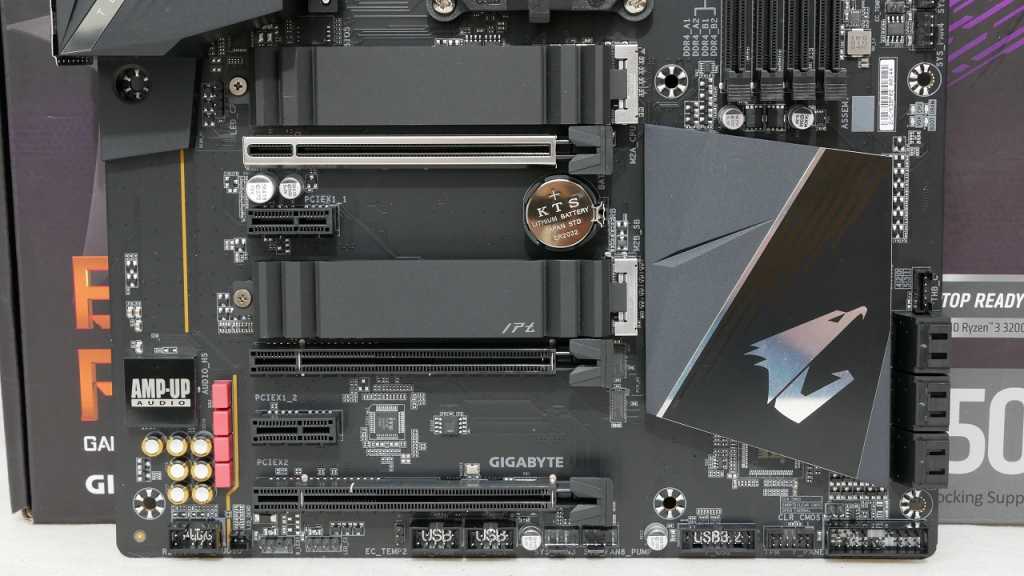 The array of destruction interfaces in the panels B550 Is the tricky part of this whole platform, and the various motherboard makers have to dance around the traffic constraints in the chipset and processor to these interfaces. Not all of these interfaces can be used at the same time, and full traffic cannot be obtained from them even when some of them are used.

Top M.2 interface to drive SSD Connected directly to the processor, so runs on 4.0x4 without interruption. The interfacePCI-Express The top X16 (having a steel chassis) will always run at this speed and in standard 4.0 because its traffic also comes from the processor in the chassis. This is where the good order ends.

The lower M.2 interface on this motherboard is connected to the chipset and shares traffic with thePCI-Express X4 adjacent to it - users can Choose one of the two, Since using one will neutralize the other. These interfaces work with the standard 3.0 chipset.

The bottom interface runs on X2 traffic only. When the fifth and sixth SATA3 interfaces are populated, it is disabled and reversed. This interface also runs on the standard 3.0 chipset. The two small PCIE X1 interfaces operate without interruption, with the chipset 3.0 standard.

In my personal opinion, the omission of the two small X1 interfaces in favor of another M.2 interface could have been a bit more intelligent and designing and suitable for modern computer systems. 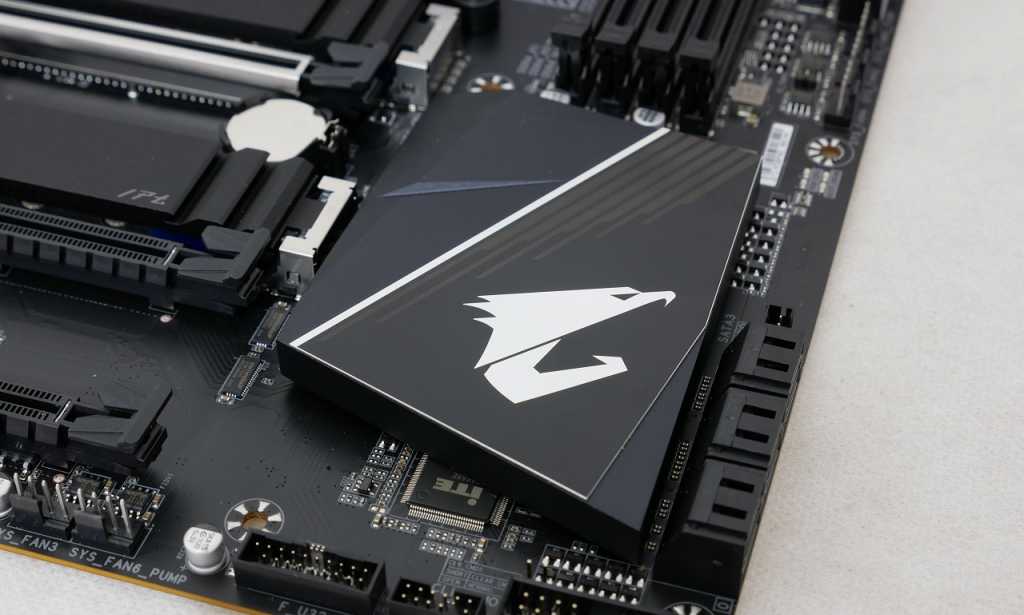 Unlike the chipset boards X570, God-B550 Is a chipset that supports PCIE 3.0 and the chip itself emits significantly less heat, which allows it to be cooled completely passively and without a fan. 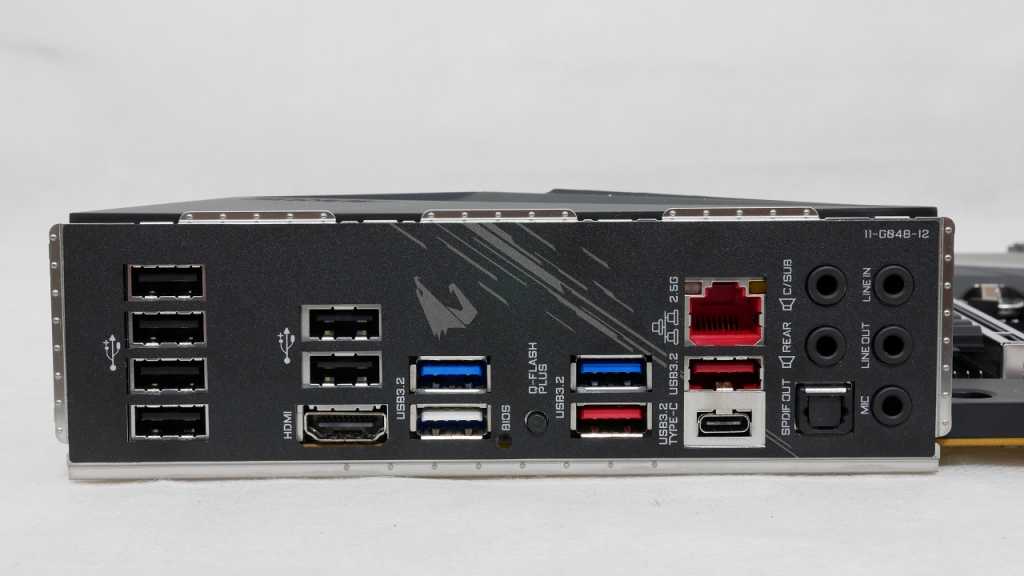 The B550 AORUS PRO contains one of the richest interfaces on the platform. There are six ports USB 2.0 for all possible peripherals, alongside four 5Gbps interfaces (10x faster than 2.0) and two 10Gbps interfaces (one of which is Type-C). The network controller on this motherboard is from Realtek and with a wired speed of 2.5Gbps. There is a button for burning "cold" BIOS in case a BIOS update needs to be performed on the motherboard - even without a CPU and memory installed. 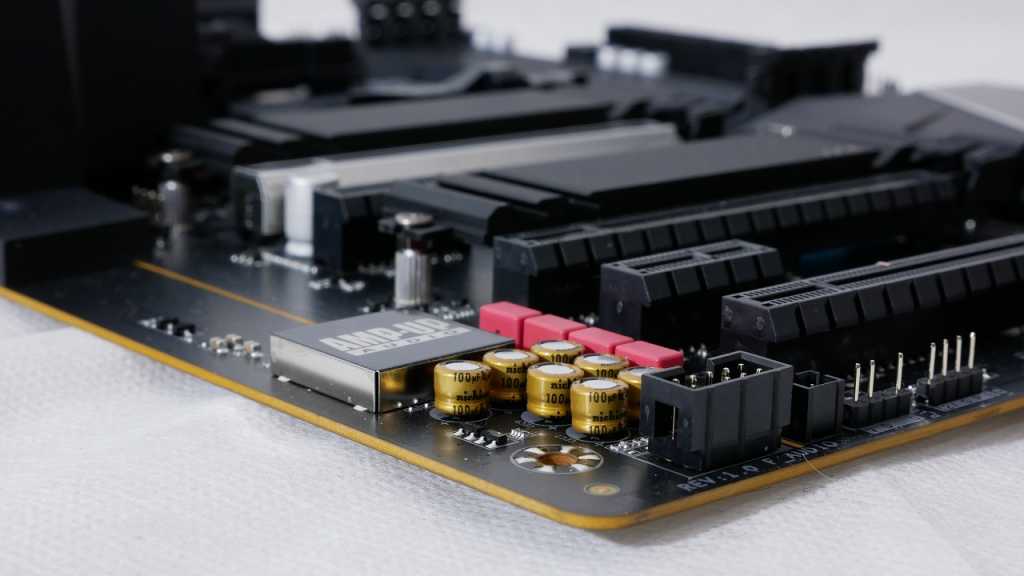 The sound card built into the motherboard is grounded chip Realtek ALC1220 which has already become the standard among advanced motherboards. Due to electrical interruptions, such built-in sound cards may not reach external card levels, but indicator improvements can be made to reach acceptable volume levels with headphones High contrast cost. Using components like many Nichicon capacitors alongside ESS amplifiers have become standard in serious motherboards. There is a lot of completely empty space on this side of the motherboard, and I wonder how much more it will be possible to improve such built-in sound cards. 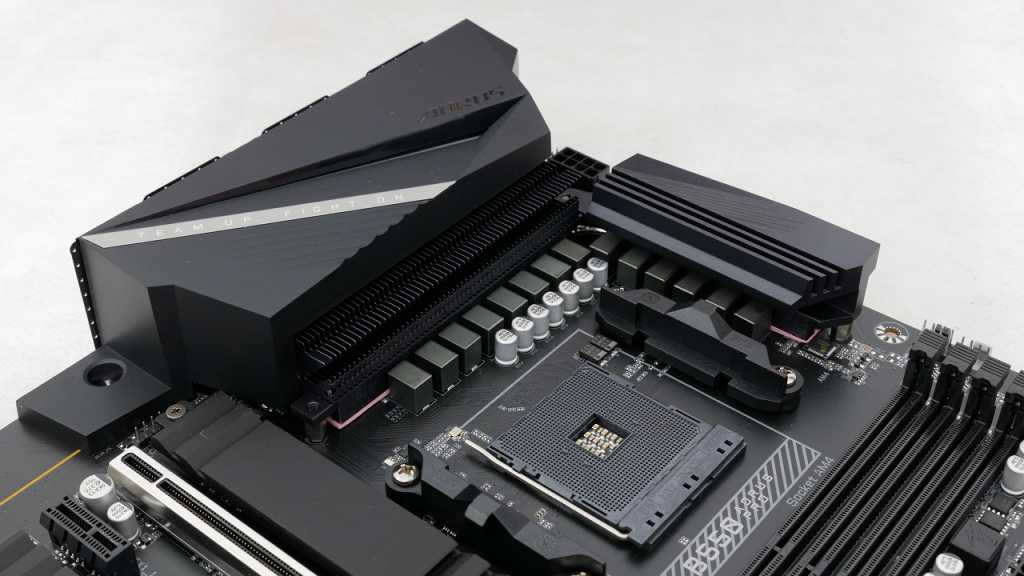 Ryzen 3000's processors AMD They are not the ones that will allow the same flexibility in overclocking as my processors Intel The K series will allow, for example, but this does not mean that there is no need to invest in quality power supply systems. GIGABYTE Continues the tradition that started recently with the over-engineering of CPU power supply systems and here we get a 12-step system for CPU processing cores. 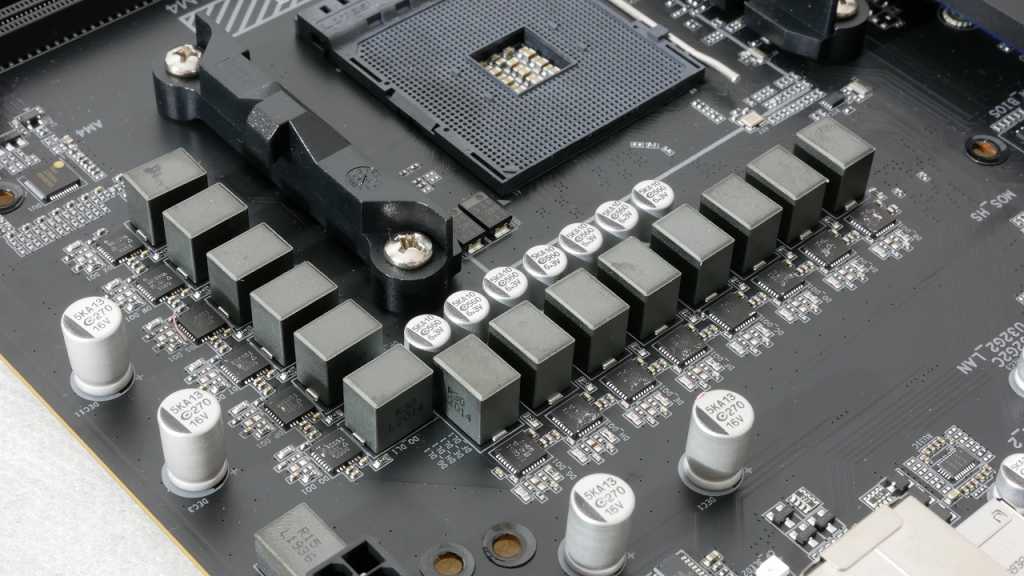 The entire system contains 14 stages with 2 being designed for the IO controller in the processor and the rest for the processing cores themselves. The phases contain a Vishay SiC651C stabilizer rated at 50A and each pair of phases is connected to one channel in the controller via a PWM splitter. There is a coil for each stage, but only get one for every two stages. I would have liked to see more filtering and capacitance on the way to the CPU with such a system, but that's somethingGIGABYTE Saves for its premium boards. Still, this is the most advanced system we have seen for such a price tag for the AM4 chassis. Nose Motherboard The resident in the past did not bring the potential to deal with quality electricity like this for the price tag. 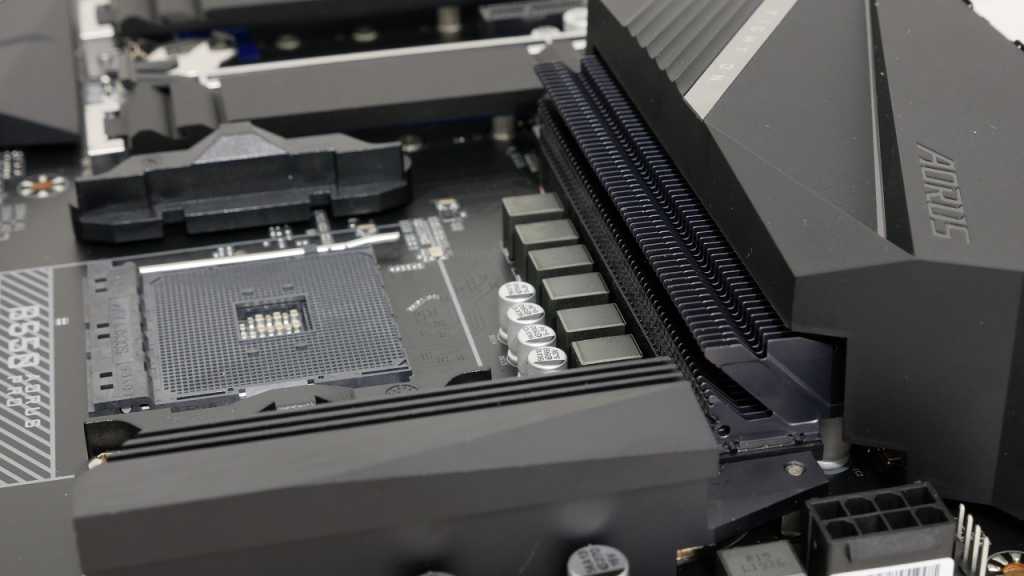 The cooling system consists of two bodies connected by a copper pipe. Most of the steps are designed for cooled machining cores by a friend of aluminum fans, the most efficient cooling that can be placed in the interior. Really you can't ask for more of such a system.

The B550 AORUS PRO is purely Motherboard advanced. Its chipset is the only thing that separates it from significantly more expensive motherboards, even with a similar amount of features.

The limitations of the secondary destruction interfaces are mainly what makes it significantly cheaper than X570 boards with the same capability Overclocking for example. The B550 AORUS PRO is mainly intended for an overclocker who does not need advanced tools such as voltage reading with a multimeter, or in fact even a physical button on the motherboard itself. I would be very happy to see an LCD monitor for reading codes at system boot for debugging, but maybe it's asking too much in an age where this feature is so rare on boards of under $ 200.

At this point, users will wonder how such a motherboard stands in front of cheap X570 boards that support PCI-Express 4.0 in all their interfaces. The X570 GAMING X is a model of GIGABYTE Which also costs about 900 shekels in Israel. Here is a general comparison between their features

The answer is that apart from supporting Standard 4.0 in the interfaces PCI-Express Secondary to the motherboard, the B550 AORUS PRO contains significantly advanced components, and a significantly larger amount of interfaces.

In my opinion, without a shadow of a doubt, the B550 AORUS PRO is Motherboard Significantly better and higher quality than theX570 GAMING X to most potential audiences. There is no single general feature in which theB550 Does not progress quite seriously from its price counterpart.

I tested the B550 AORUS PRO with a Ryzen 9 3900X processor along with using the automatic overclocking option that the board offers, the PBO. The voltage stabilizer system remained fairly cool, with a current of 160A being transmitted through the stabilization system. I think the Ryzen 9 3900X is a pretty sensible pairing to such a motherboard, as there are cheaper and more sensible motherboards to pair with Processors Like theRYZEN 7 3700X for example. Also, it makes sense that a processor for NIS 2000 would be attached to a motherboard for NIS 900 much more.

The motherboard does exactly what it needs. I have not encountered a frequency lowering during exertion, not at high component temperatures at all, not a strange behavior in the BIOS. No RGB here, no advanced overclocking tools on the motherboard itself - just a solid No nonsense board that allows support for many interfaces, and lets you enjoy PCI-Express 4.0 for a single video card and device storage One - which is what most users need.

It is important to note that there is a version of this motherboard with Wifi in AC standard that costs only $ 10 more. If you need wireless communication - this will be the model to choose.