Below you will find a very interesting product review - and its performance represents most of the performance of the Geforce RTX 2060 SUPER models on the market. This video card is for those who want to Performence Serious at 1920 × 1080 pixel resolution today, but also at 2560 × 1440 pixel gaming, even in non-high definition settings.

Earlier this year the graphics core maker NVIDIA She decided it was time to refresh between her video card series and cards like that RTX 2060, RTX 2070 and RTX need improvement.

The thought was probably a price drop but atNVIDIA Still refused to talk about discounting existing models and instead we actually got re-branding with slightly different technical data for existing products. The branding is SUPER and is simply added to the names graphic cards Existing. I think the network has already clearly expressed its opinion on another word and is not needed in the name of the video cards which only causes great consumer confusion.

The same rebranding means that existing video cards get faster and faster versions, not necessarily just in frequency, but in the actual amount of CUDA processors in the graphics cores. The most dramatic improvement among all SUPER cards was the RTX 2060 with the aim of aligning an important technical feature with the competition from the competition AMD And theRadeon New ones.

NVIDIA divides its graphics cards by creating several graphics cores in the same architecture. The architecture that dominates the new series is Turing Manufactured in 12 nm process and core on video card RTX 2060 SUPER is theTU106.

The original RTX 2060 core included fewer components from the full TU106. Total CPUs have been cut to1,920 only, And two graphical memory 32Bit controllers have been truncated at the core of existing 256Bit to receive 192Bit connected to 6GB of memory (32Bit per controller, which connects to each chip Of 1GB זיכרון graphic).

For RTX 2060 SUPER full 256Bit controller and 8GB's connection זיכרון Graphic type GDDR6. It is the same in this technical feature asRTX 2070. Other inflated components such as ROPs and RT and Tensor processors also remained from theRTX 2070. 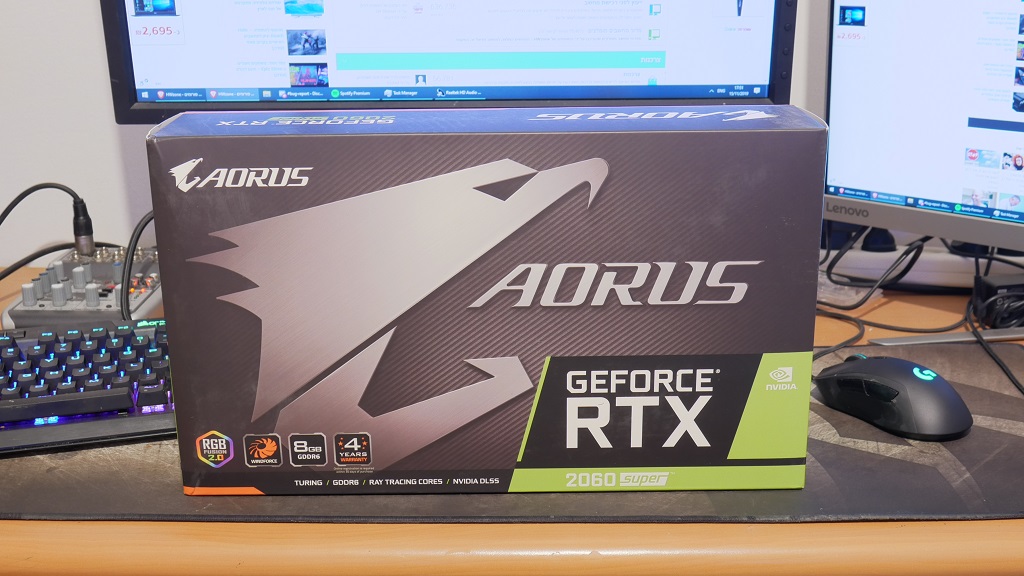 In this review, we specifically examine the hardware giant's Aorus model GIGABYTE. This is an advanced model with lighting RGB And three-fan cooling is also illuminated. 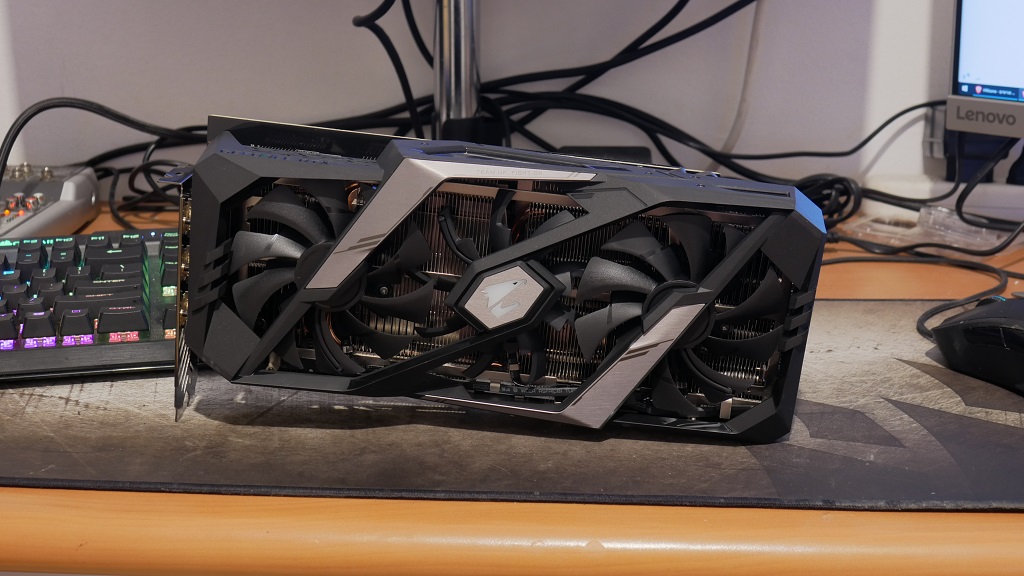 The special card has three fans, two of which have significant fans. The middle is mainly used for decoration as it does not push a significant amount of air. The length of the card is 29 cm, its height is 13.4 cm and its thickness is 6 inches.

This video card has an interesting array of display ports, but according to the architecture restrictions itself, there is a game with the options. One fixed connection is the Type-C that works with a VirtualLink standard that is compatible with VR binoculars. In addition, three HDMI 2.0 ports and three ports DisplayPort 1.4.

There are two display modes available where you can select four available screens. Connecting screens in one of the configurations when you turn on the computer will automatically detect which display the video card should work with. That's a nice improvement over old methods that included burning bios to the video card and the risk of its becoming a door stop. This means, by the way, that this video card has two bios chips on the printed board for this function, nice. 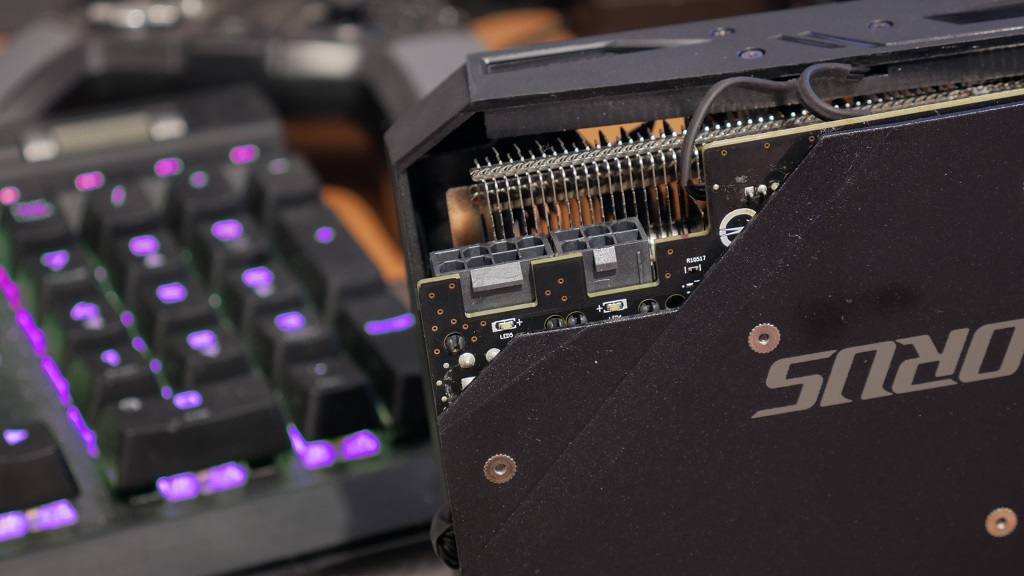 This video card has a rear aluminum plate for cooling the memory chips. The thickness of the card is three interfaces Motherboard Standard, so it's important to note that there is enough room. There is also a logo AORUS Cool tulip over which full software control. You can also turn off completely. 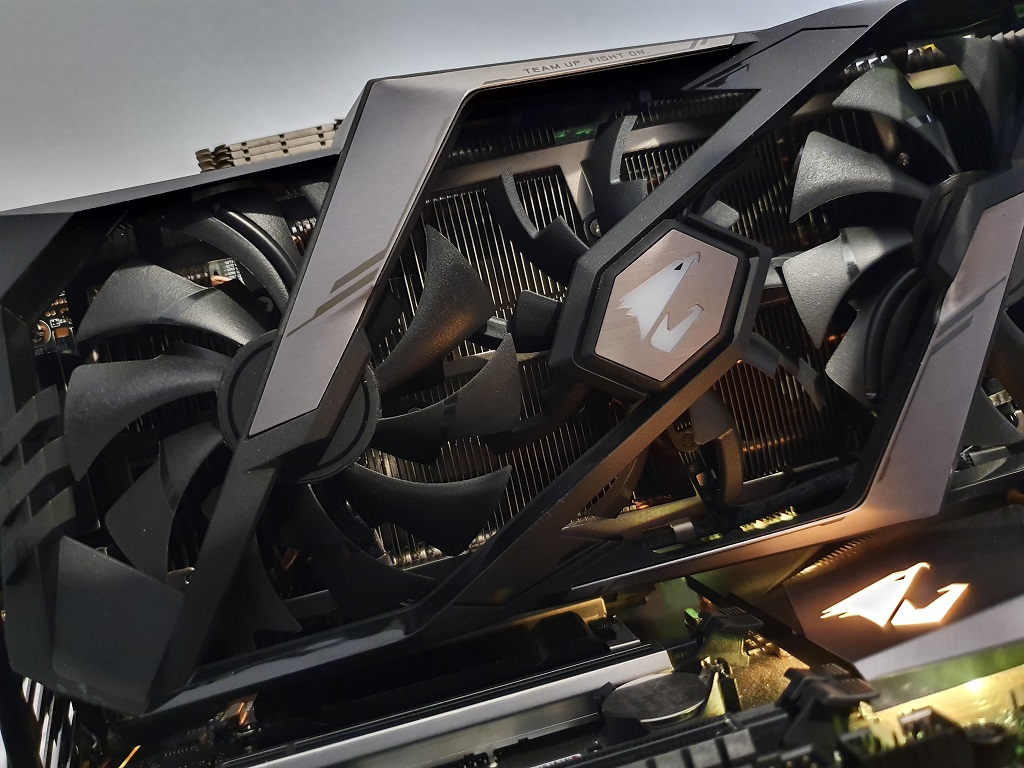 The RTX 2060 SUPER Aorus cooler is similar to the Gigabyte heat sinks that used to attach more serious graphics cards like the RTX 2080 Aorus version. This is good because it means that cooling will work relatively efficiently with a less hot core. Operating temperatures drop and so does the noise level with Cooling Such. 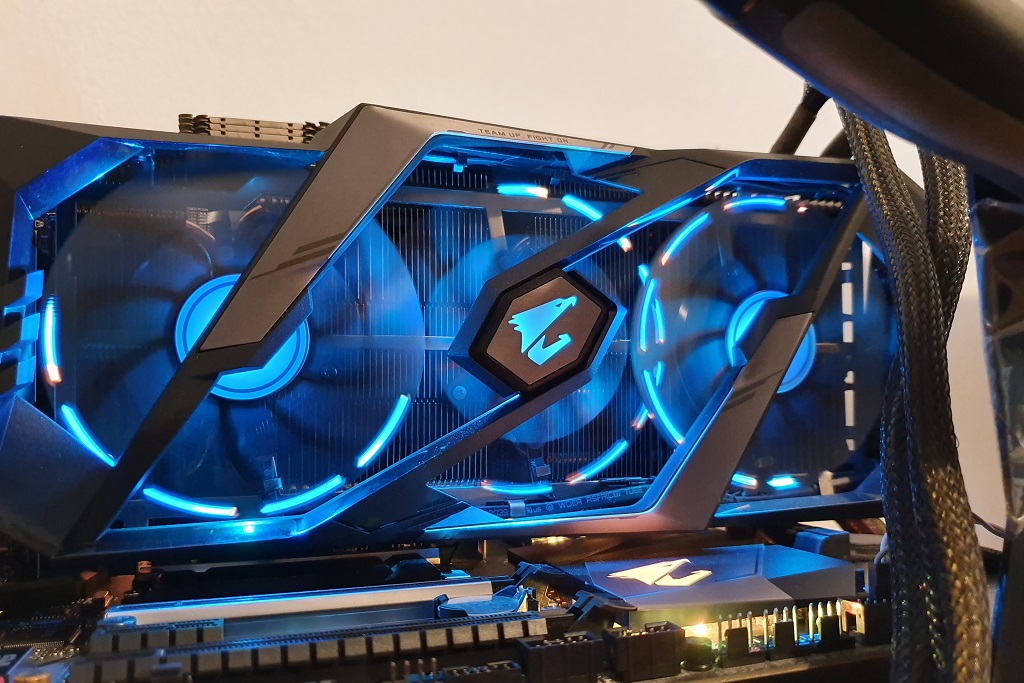 This is the result of LED bulbs on the fans. Personally, I am not a big fan of visual effects in heat sinks, but the technology is very interesting, and it is difficult in pictures or videos to convey the special effects of colored LED lights.On Gigabyte's website You can see simulations by lighting in the dedicated software.

And now, to the artistic part, the performance tests.

Our exam system runs a clean install of Windows 10 in the latest version as of today. On this occasion, we also refresh our list of games based on the advancement of hardware and the desire for serious performance. GTA V and Witcher 3 go on vacation, and in their place came Red Dead Redemption 2 and Borderlands 3. Both of these games are quite heavy and adopt the hardware as fair.

The video card exams are done on the basis of Intel's Z390 platform and use of the Core i9 9900K processor to date is still considered the leader among all gaming processors and push-to-the-edge video cards, even if at a single percentage point compared to the competition. The cooling is deposited The Noctua NH-D15 Legendary.

The motherboard remains The Z390 Aorus Pro Great, and the memory is the D80 2X8GB DDR4 ADATA 3600Mhz. The power supply to the system is theCorsair The HX 1050W, which, although it has been through for a few years, performs wonderfully.

We looked at the different games at two different resolutions that are considered common and are primarily designed for the type of hardware in the review. FullHD 1,920 × 1,080 and WQHD 2,560 × 1,440 are particularly popular resolutions on 22-27 inches today, along with the addition of the ability to display 60-240 frames per second primarily for competitive gaming needs. 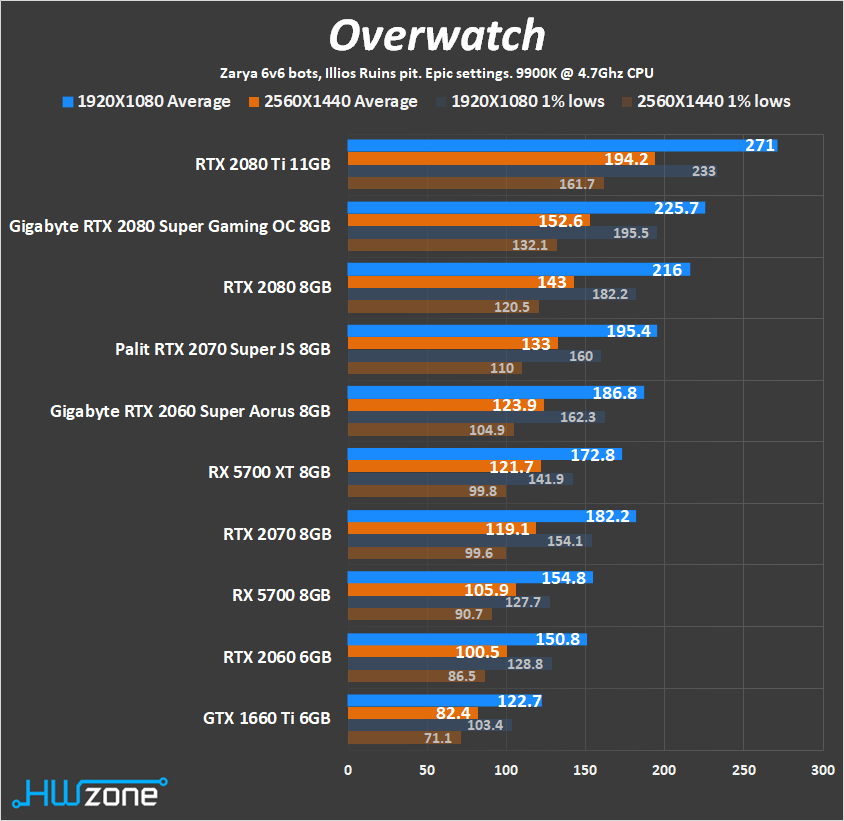 In Blizzard's Overwatch game the performance is respectable. In this game, the video card is slightly faster than the RX 5700 XT at various resolutions. 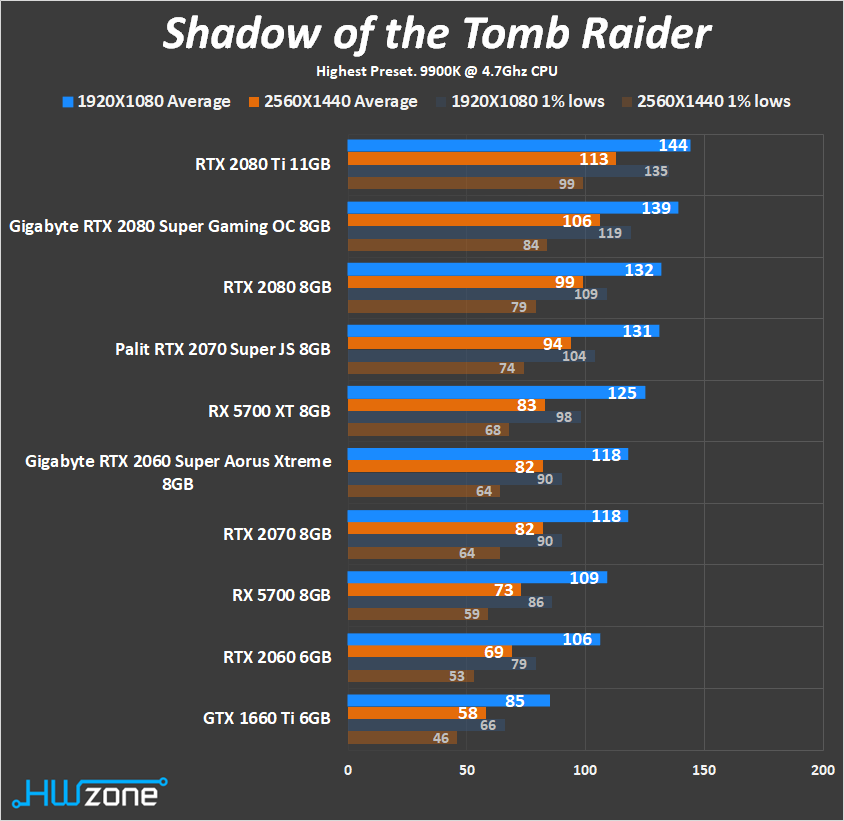 The new Tomb Raider game favors performance AMD In general, and this is where theRTX 2060 SUPER Slightly behind RX 5700 XT. The performance difference is not very large between now and then. 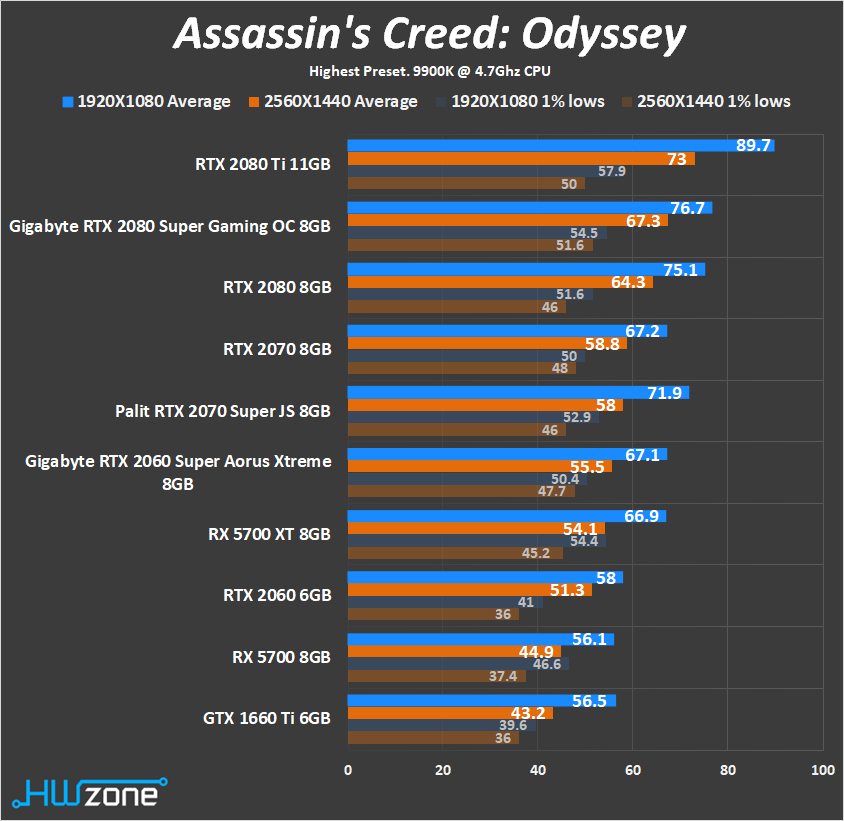 In the latest Assassin's Creed video card performance is quite tight, it's a relatively heavy title on Processors. Here the bypassRTX 2060 SUPER the RX 5700 XT slightly. 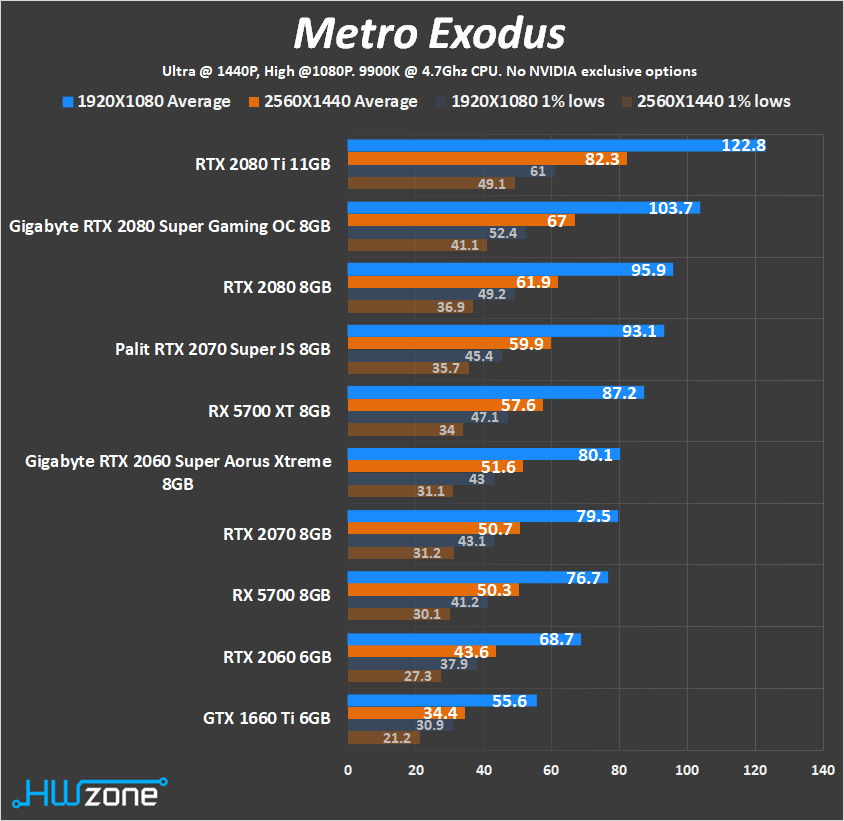 With the latest drivers we see results Performence Interesting title in Metro Exodus. Here card performance is consistently lower than those of RX 5700 XT but equal to those of RX RTX Standard 2070. 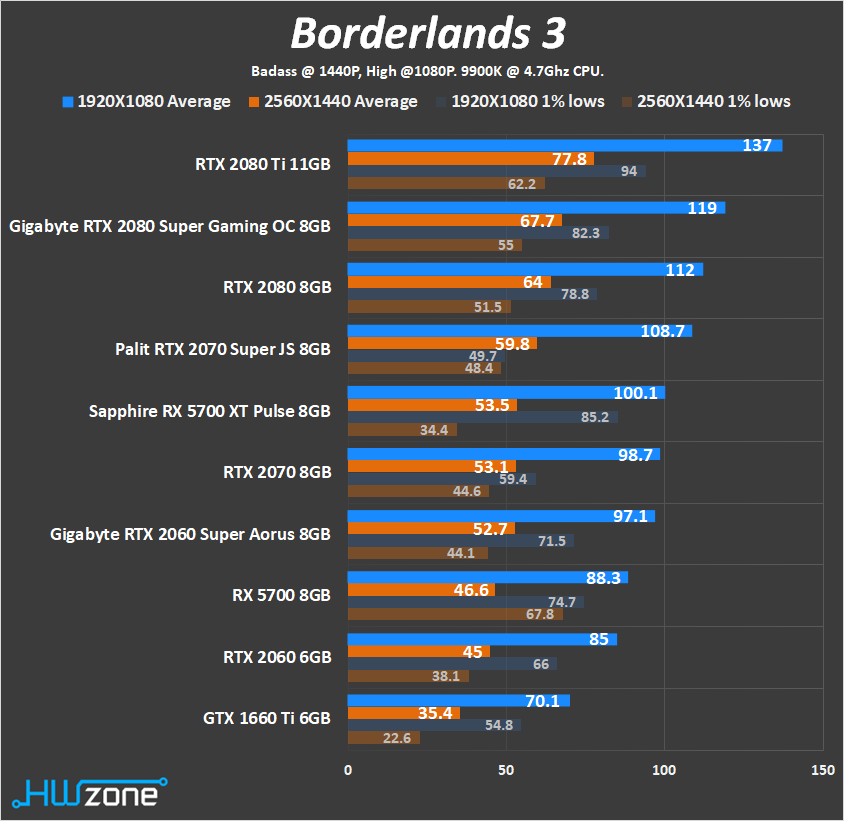 To everyone's surprise, the new title in the Borderlands series is very heavy to execute compared to the relatively simple visuals and the fact that the previous games in the series were very easy to execute even when they came out. This title was tested in two different sets of settings, one for each resolution. The average frame rate per second of the RTX 2060 SUPER is similar to that of the RX 5700 XT, but the minimum amount per second measured is higher, at least at 2560 × 1440. In the title it is difficult to reach 144 תמונות For a second in High Definition settings, even with the most advanced gaming card. 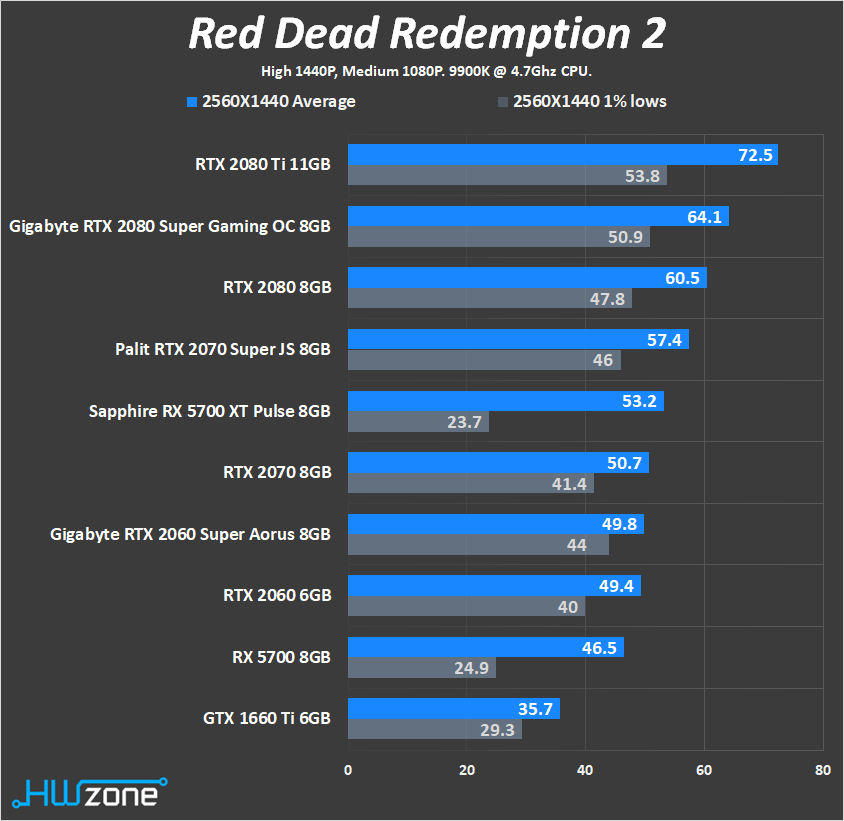 Right now due to time and technical challenges, Red Dead Redemption 2 performance is delivered at 2560 × 1440 resolution. This wild west is especially wild. Since the game came out on the PC, it has been riddled with performance-related bugs and bugs and only in recent days has there been an improvement that brings it to a state of erosion with modern hardware. I doubt how much improvement is seen from now on, so I clicked the exam.

Currently this title has my cards AMD A problem of frame falls a little ugly, which I hope will improve in the coming weeks. Besides, performance RTX 2060 SUPER is quite solid and close to those of RTX 2070. In general, the performance parts are better than the RX 5700 XT in this title. 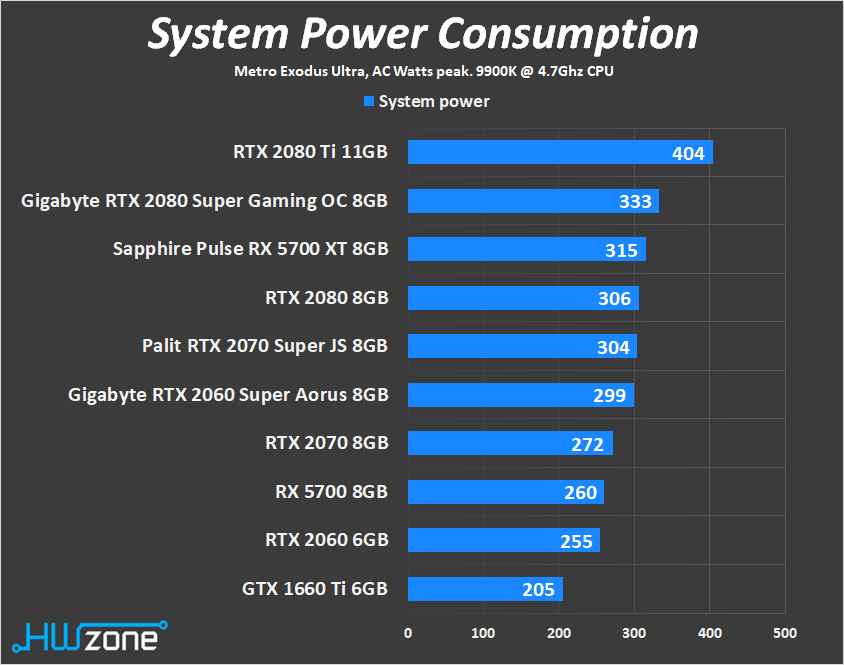 The video card power consumption resulted in higher overall computer system consumption, probably due to the increased operating frequencies. Although, with a power consumption of about 300 watts in maximum effort for the whole system while playing, the rated power supply of 550 watts or more would certainly suffice for such a system.

At this stage of relative dominance in the video card market, what seems to beNVIDIA Giving can be something that is forced to accept. Admittedly, there is an awakening in Red's camp AMD As far as the cost for such price tags cost, $ 400 area.

The RTX 2060 SUPER is a constant and constant improvement over the standard RTX 2060. It does not come at the same cost including an average of about $ 40 on average over the price that RTX 2060 was available after launch. The big problem with this video card, at least in terms of performance tests, is the RX 5700 XT's AMD, A video card that costs 400 dollars as well.

Version of vista GIGABYTE The light-saturated vision that is the Aorus version does quite well. With an ambient temperature of about 25 degrees in the exam and temperature system Core Graphics of about 68 degrees C with fairly quiet operation, as far as cooling goes through the performance test, no problem here. It is clear to me that this is not the most advanced cooling you can find on RTX 2060 SUPER But if you really insist on lighting, it's hard to ignore the effects of AORUS.

At the moment, the challenge with a general recommendation on the RTX 2060 SUPER is mainly the competitor AMD The RX 5700 XT sample that sometimes enjoys higher performance. Although, we notice that we still haveAMD Little work on making the card the owner Performence Good in every situation, with falls Performence seldom.

Anyone who is interested in the best features that gives NVIDIA Along with lower power consumption, the RTX 2060 SUPER is a respectable option that will result in good performance. No one will lose anything serious if they choose this video card over the competitor. B-GIGABYTE Take care to cover all sides in any case. We know that their Gaming OC version of the RX 5700 XT is sometimes sold extremely cheaply and is often recommended.

In conclusion, there is a very solid product here that also looks good when needed. The performance is reliable and good, especially for FullHD and the display port array is also something not seen on any video card today.