The LGA1151's advanced motherboards are in their peak sales season - the various manufacturers are trying everything they can to attract users to choose them and their products. For some capabilities Overclocking Is something to flaunt and boast about, while for others it is a serious connection for content creators with such exotic interfaces.

In this review you will get to know one of the more specialized motherboards currently sold in the market and tending to the second category - the Z390 Designare of GIGABYTE.

Let's talk about branding products first. It seems that the various motherboard manufacturers are trying to do everything possible to refresh the branding of motherboards. Sometimes these are numbers like Gaming 3-7, sometimes different and exploding names like Elite or Extreme. You could say thatGIGABYTE Has done everything and is now in the process of getting to know the new names, she seems to have had enough of her numbers.

The motherboard in the audit differs slightly from the company's branding and considers itself unique and unusual.

This pyramid illustrates the current branding of GIGABYTE With regard to the new series and Z390 in particular. At the bottom we have the gaming and UD series, above the more serious gaming and overclocking series,Extreme Which are considered to be the most senior motherboards.

In this pyramid, Gigabyte chose to place the Designare alongside motherboards Such as the Ausus Z390 Pro. Position in the same pyramid GIGABYTE She built a bit of a weirdness for me after using the motherboard in the review. Later I will explain why.

The Designare brand (expressed in de-zig-candle) was born a few years ago when the-GIGABYTE There was the idea of ​​bringing Motherboard Suitable for content creators who prefer something a little more modest and less flashy. The idea is to use a printed circuit board that is already in use Motherboard Give it a neutral, simple color scheme and put in a decent amount of interfaces and connections to serve the content creator. 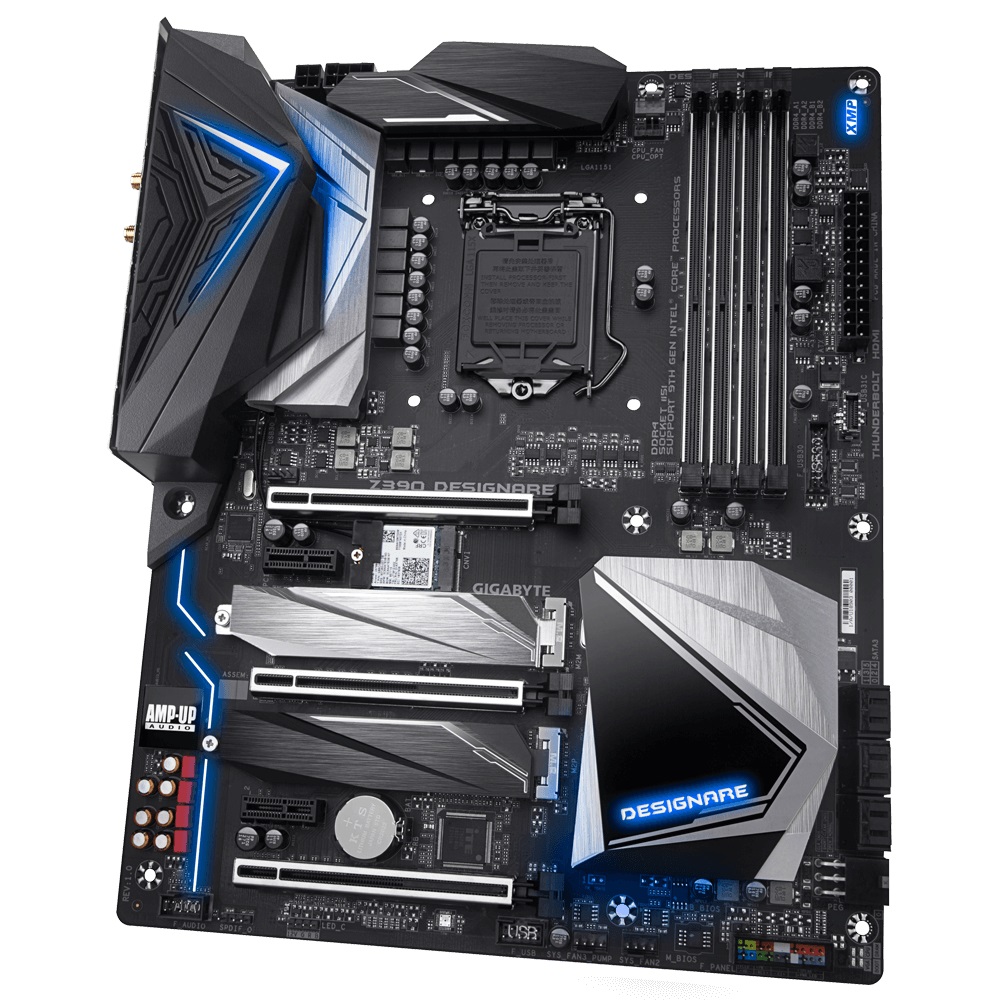 Here are some facts about theZ390 Designare:

This motherboard is in ATX configuration and is suitable for most standard gaming consoles as a result. It contains PCI-Express interfaces that allow connection graphic cards In CrossFireX andSLI For gaming.

The printed circuit board on this motherboard is based on the design you will find inZ390 AORUS Ultra, but additional interfaces have been added to which we will detail below.

The color scheme selected GIGABYTE This motherboard is quite solid. All the cooling elements on the board are decorated in different shades of silver and black. There are bulbs RGB On the various cooling bodies and around the built-in sound card.

The price of Motherboard This is set to 270 USD or NIS 1,300 in Israel and is located just below theZ390 AORUS Master. 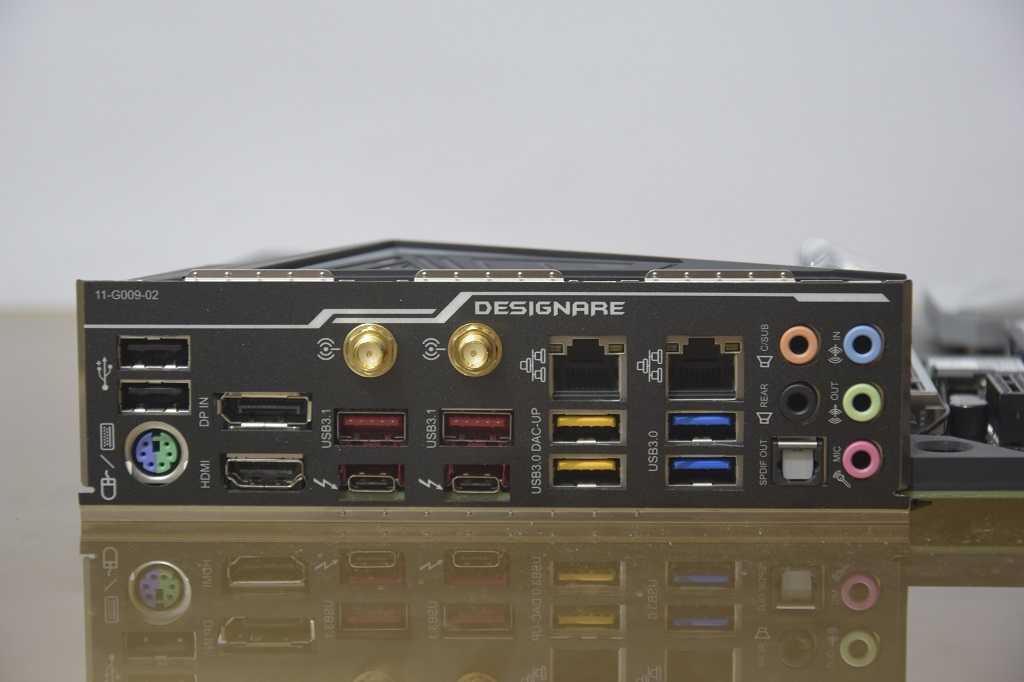 Look well, it seems the richest rear exit array in the LGA1151 socket and possibly the richest motherboard in the world today:

If I had to rank what goes on here, I think I would go for 9 from 10. I do not think that in my time as a reviewer on the site I met such a backward connection on a mother board, certainly not in the mainstream.

Only one thing feels a little striped and this is the opportunity to use the controller Network Advanced to at least one of these network ports. Do not have 10Gbps, but also using a controller of 5Gbps or even 2.5Gbps will be welcome. True, I understand that you can not get everything, certainly not less than 300 dollars.

It's amazing because here are the Type-C ports. They are connected to the visit Thunderbolt 3 means that they can do a lot. It is a connection that knows how to make a network, display and transfer details at a dizzying rate of 40Gbps. Content creators with flash drives Thunderbolt Very outsiders will appreciate it.

PortsUSB The yellow 3.1 has a great mechanism, their voltage controller connects programmatically and allows control of the output current, so these ports are described as suitable for use in an external audio amplifier that needs a specific or high current to properly amplify. 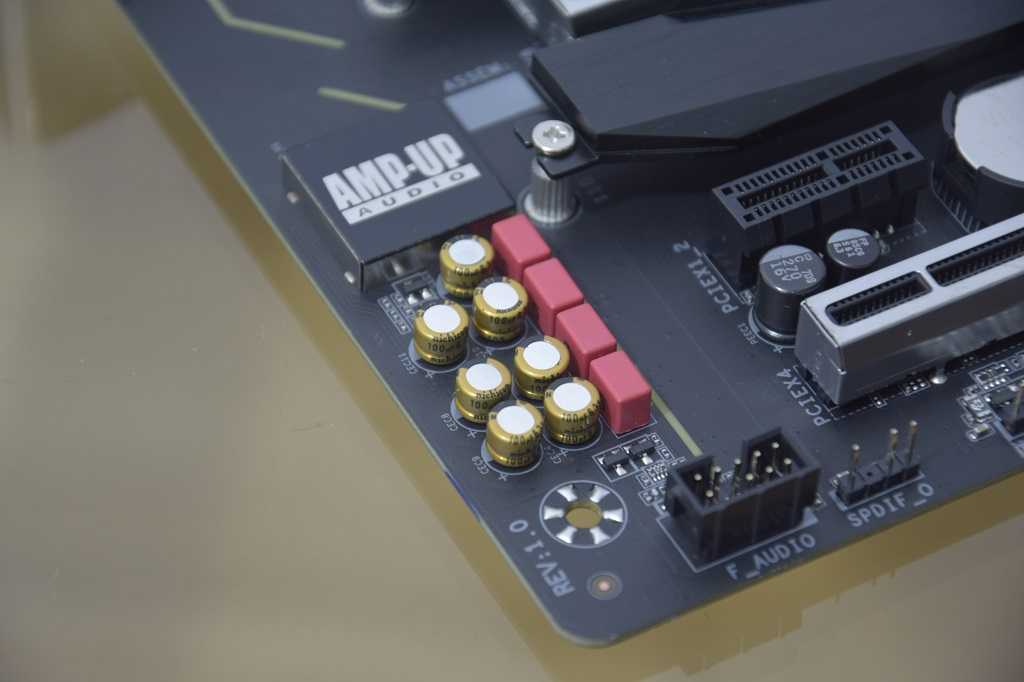 Audio has also got. The sound card used is none other than Realtek's ALC1220, which has become a bestseller mainly due to the fact Drivers Stable. The signal is simple but very efficient and includes Nichicon Japanese capacitors alongside the ESS amplification system, nothing that a third-party sound card can bypass, but significantly better than what we knew just a few years ago on advanced motherboards. 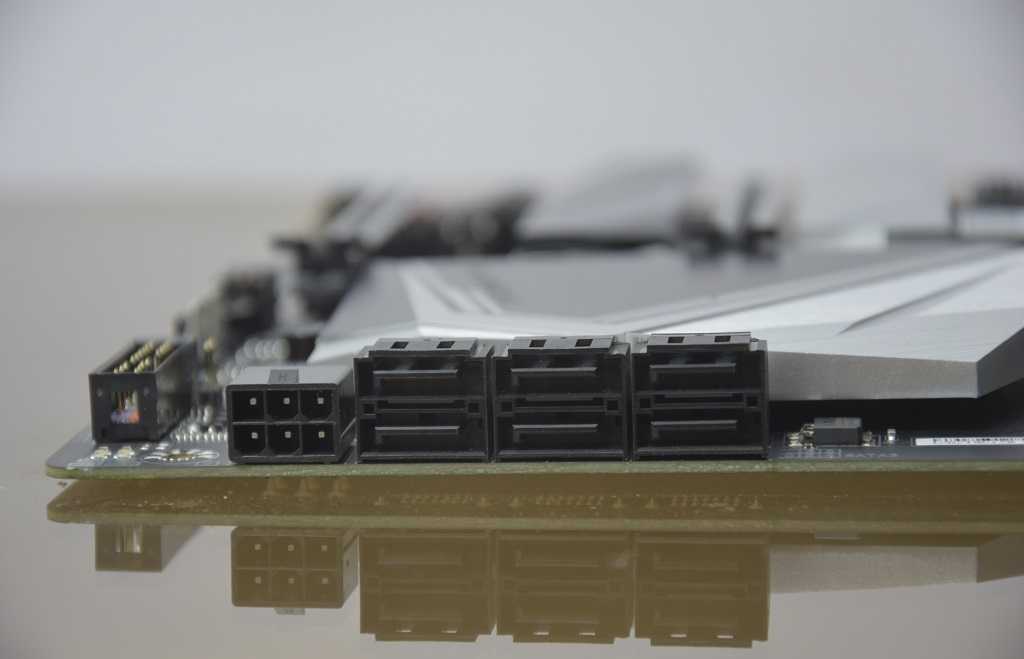 SATA connection area. I'm not mad at GIGABYTE And fully understands why 6 chose the standard minimum for standard hard drives. Time passes and we are progressing to a high level of connectivity and a significant revision. 6 hard drives in the computer is becoming more and more rare in passing content creators. Ask the regional image editor, it may be using an array of storage On an external home server or simply on removable external drives. Placing an additional SATA controller means board ceilings. No thanks.

This voltage input from the left, by the way, is used to supply power to the IS-PCI-Express And is recommended for use only when the three interfacesPCI-Express The long ones are populated with expansion cards hungry for electricity. Otherwise, you do not need a cable connection from the power supply. 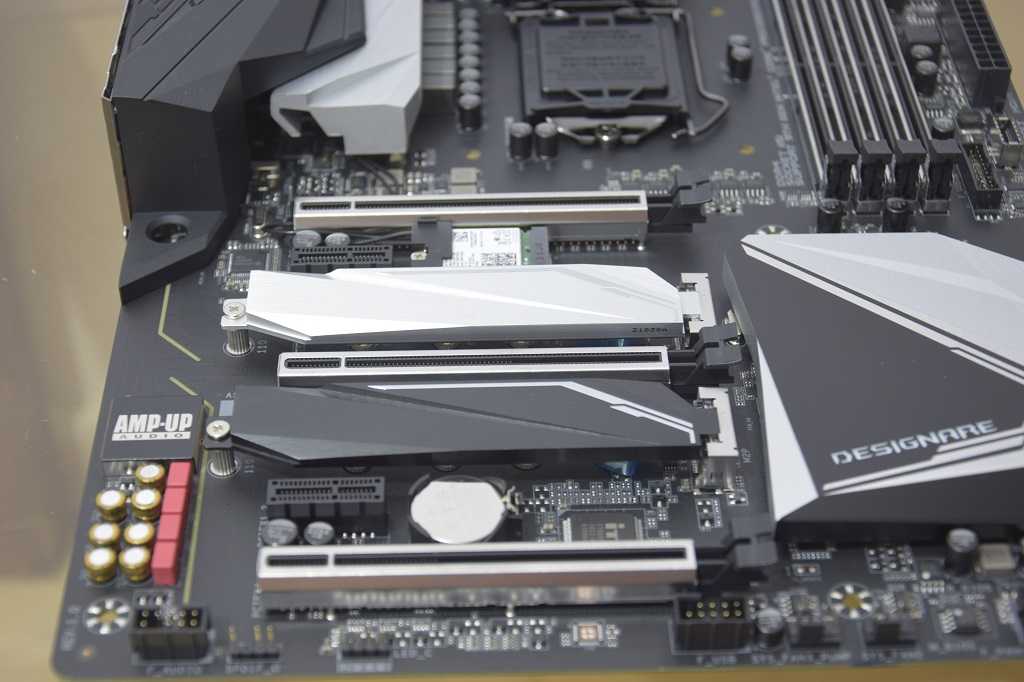 If the expansion slots are concerned,PCI-Express Quite simple on this motherboard. The upper is the place where you want to connect a video card, the long medium will be used for additional video card and bottom for things like capture cards and sound cards for example.

There are two iron caps used as cooling devices between these PCI Express interfaces and of course they cover the M.2 ports for connecting drives SSD Extremely fast. A computer with such a motherboard probably will have to spend hours in rendering movies, editing images or overklocking in old style. AC Power Supply System GIGABYTE Has been significantly improved and quite dramatic in the generation Z390 And here is a particularly robust 12 + 1 system based on a 6 + 2 configuration power controller for the processing core and the various controllers. 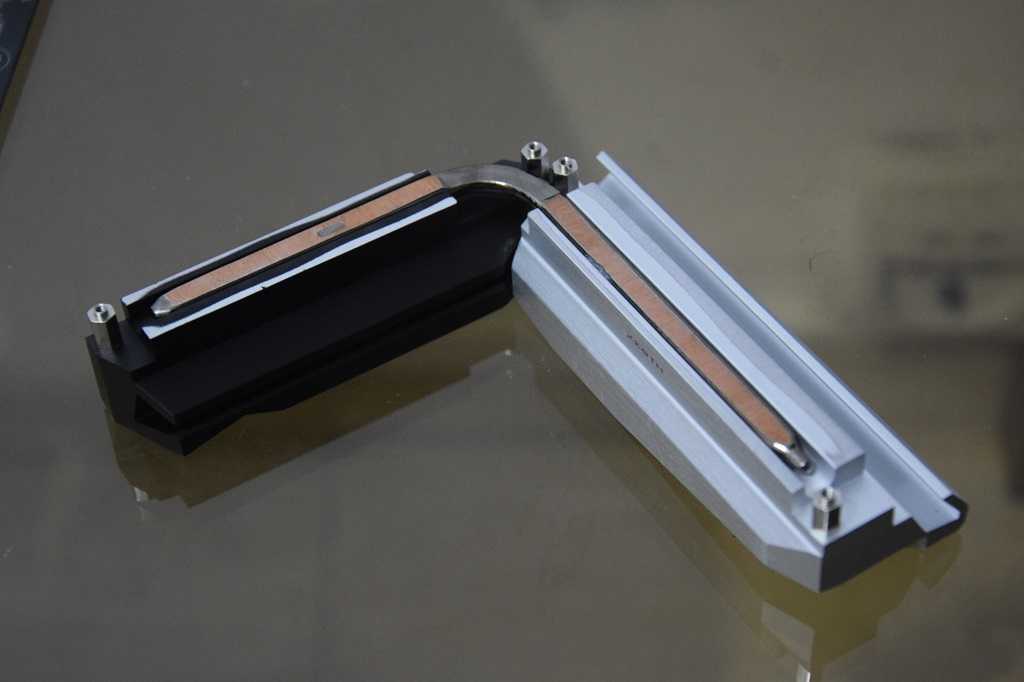 The heat sink for voltage regulators is… proper. It's significantly better than what we saw in the Z370 generation but slightly pale in front of the aluminum fans of Gigabyte's gaming boards today. I understand that the addition of a copper pipe for conduction is an important thing, but a body Cooling Need a surface area and fan to disperse the heat efficiently. The surface area of ​​this heat sink is unfortunately very mediocre. However, because the power supply system is so efficient, it is expected to do the job very easily. 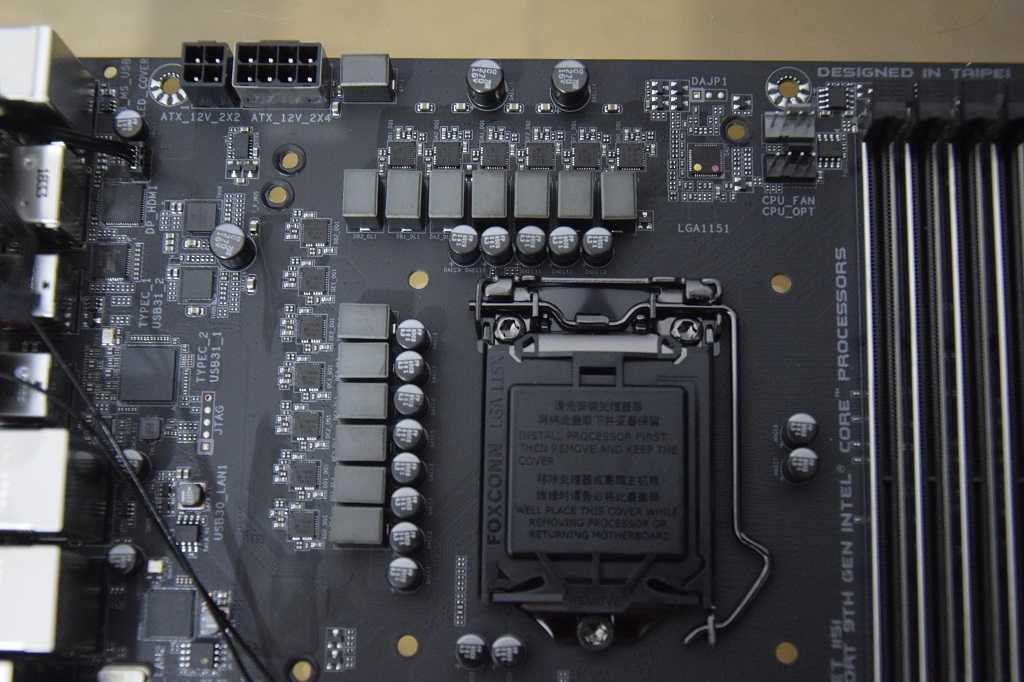 Thus, the electricity supply system is seen after the cooling and plastic parts are dismantled. I'll start by saying that there's absolutely no need to connect both the 8PIN connector and the 4PIN to this motherboard to work properly. Connecting only 8PIN to the processor will suffice with a huge physical limit of 480W.

This system uses the popular IR35201 controller with 6 + 2 steps. There is a split of the 6 into the 12 stages and each stage uses an IR3553 stabilizer with maximum current supply capacity of 40A. This means that the maximum power supply to the processor core is 480A. Processor Core Typical 9K i9900 needs 150A in time of effort, so this system remains effective and safe to use with Overclocking Which may take the 9900K up to about 250A.

The goal is to stay in the 50% of the current capacity to achieve maximum electrical efficiency from the stabilizers, and for this there is a dynamic system that also knows how to turn off some of them at rest and according to CPU demand. Due to the use of splitters they turn off and turn on in pairs. This is not the best environmental solution, but promising capabilities Overclocking Serious.

We conducted a performance test for the Z390 Designare power supply system. We used the processor Core i9 9900K in 3 modes.

These situations fairly reliably describe the variable load states of advanced motherboards with such a processor. The ambient temperature during testing is 23 ° C. 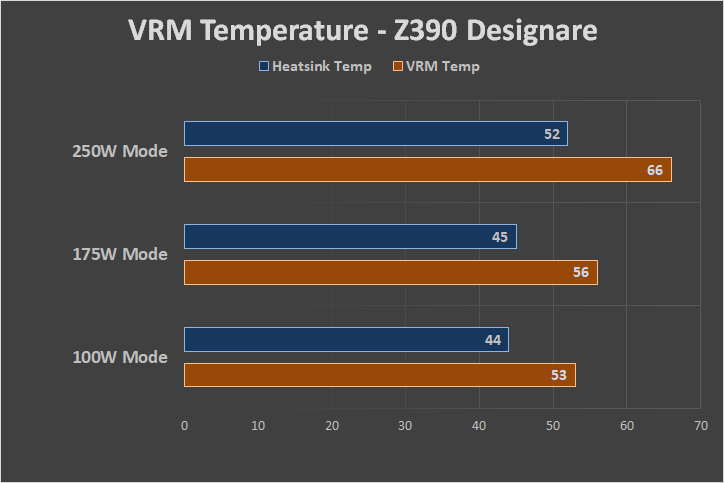 The voltage stabilizer temperature (VRM) is measured on a self-stabilizing body, so that 15 should be added to our estimate to reach the number within it. The maximum permissible temperature of stabilizers is 115 Celsius. Above this they actually turn off or operate a frequency reduction mechanism for the processor. Using an infrared meter, we also tested the highest surface temperature on the heat sink itself, described as Heatsink Temp.

Despite the fairly standard heat sink used in Designare, the operating temperatures are simply amazing due to the highly efficient voltage stabilizer system. I must admit that I was a little surprised that I was worried that the heat sink might cause the reported temperature to be a little unpleasant. As far as I'm concerned, everything below the 80 line is excellent, since you have to think about the internal temperature that is slightly higher than the slightly reported.

The Z390 Designare GIGABYTE It's definitely not a routine motherboard. This is the AORUS step brother for gamers but I definitely see how it can serve Gamers. For many, gaming and content creation are things that fit into each other. In addition to this, we need to add overclocking capabilities that will not be shameful Motherboard Advanced in LGA1151 socket andZ390 in particular.

The price of the motherboard as mentioned moves in the 270 region and this price is approaching the real shark category. Among the advantages of this motherboard it is important to mention the rear ports and the addition of the blessed Thunderbolt 3. This is a very powerful persuasion tool for many. The 1.7Gbps wireless internet is also a serious bonus since it could GIGABYTE Select the card Network Significantly slower than the 867Mbps that is currently sold to many.

Yes I would like to see Motherboard This comes with connectivity Network Especially when the output of a home content server or a business connection to the 1Gbps infrastructure is becoming increasingly common in today's high-tech industry. 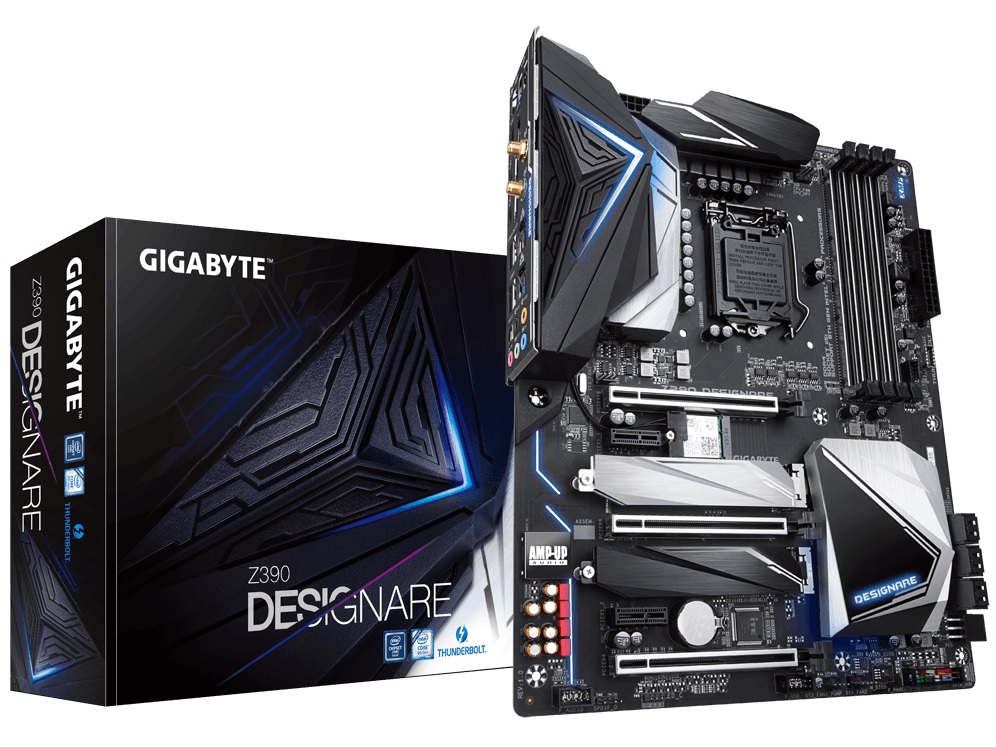 I really do not have much left to praise GIGABYTE On the excellent engineering of this motherboard. I see the progress it is making and I just hope that it will keep the standard at least as high in the next generation of motherboards, whenever it is, since dropping it is very possible.

I really do not have anything left to add to this motherboard. I will warmly recommend him to those seeking the more serious and serious adventures of motherboards. Is this the best overclocking board for 300 dollars? No. Is this the most recommended motherboard for the average gamer? Not even that, though Motherboard It comes to serve a demographic that just wants everything… everything but connection Network Very fast lines. Abilities Overclocking, Maybe something in aesthetics and sure lots of interfaces.

The Z390 Designare is Motherboard Solid, full-bodied, with excellent connectivity. He will serve those who seek the best of all worlds. For its versatility and versatility,Z390 Designare our recommended medal. Well done.