Intel officially announces 11th generation Core models for desktops with the code name Rocket Lake S - a new generation of Processors Which promises to take the crown of gaming performance. All the details inside

Today officially Intel Announces and introduces the 11th generation Rocket Lake S processors for desktops. Processors These are the successors of theComet Lake We met last year (Generation 10) and are launching the same work - LGA1200.

The new generation of processors Intel It focuses mainly on improving individual core performance to provide a better gaming experience compared to the previous generation and the competition (AMD Ryzen processors). The way to achieve this goal at Intel is mainly through a variety of architectural improvements that it made when we first get from it different processing cores from those we knew from another generation Skylake Of 2016. 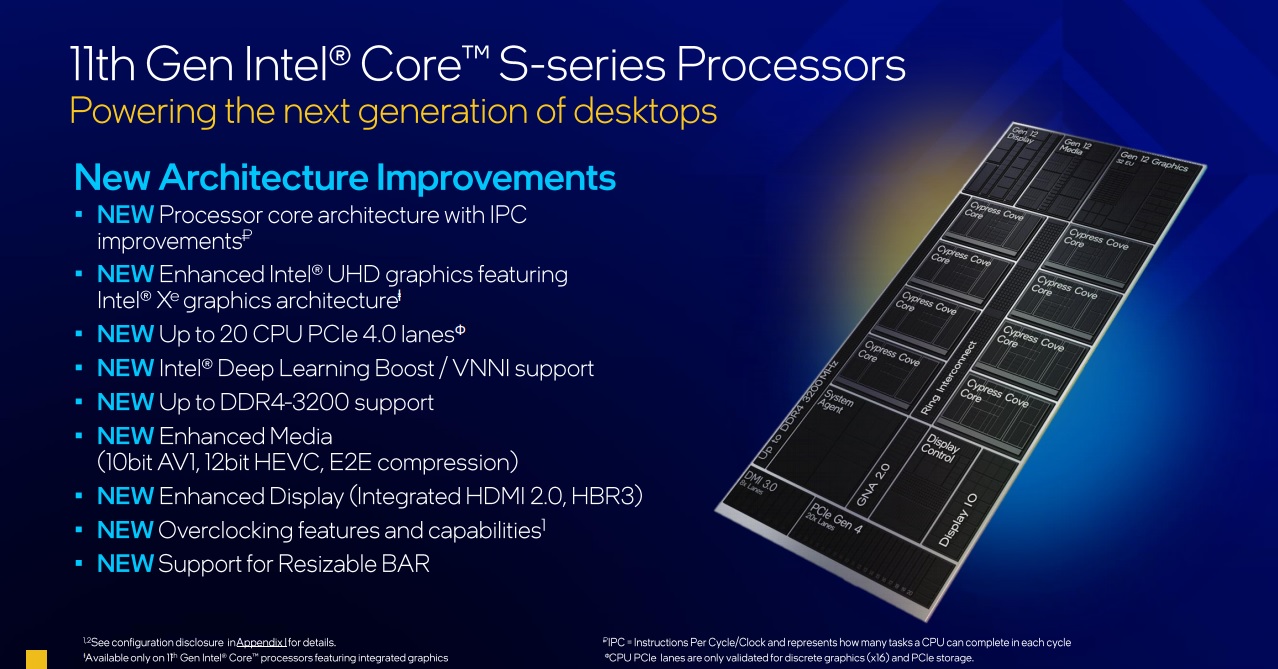 Below is a list of improvement points in the 11th generation Core processors. First, thanks to Cypress Cove processing cores claims Intel For improved processing at the same frequencies (instructions per clock).

In addition, the new processors are equipped with the 12th generation Xe graphics core Intel Which is a huge improvement over the UHD Graphics we have known in processors of recent generations. This is reflected in both graphical acceleration capability and coding Video. 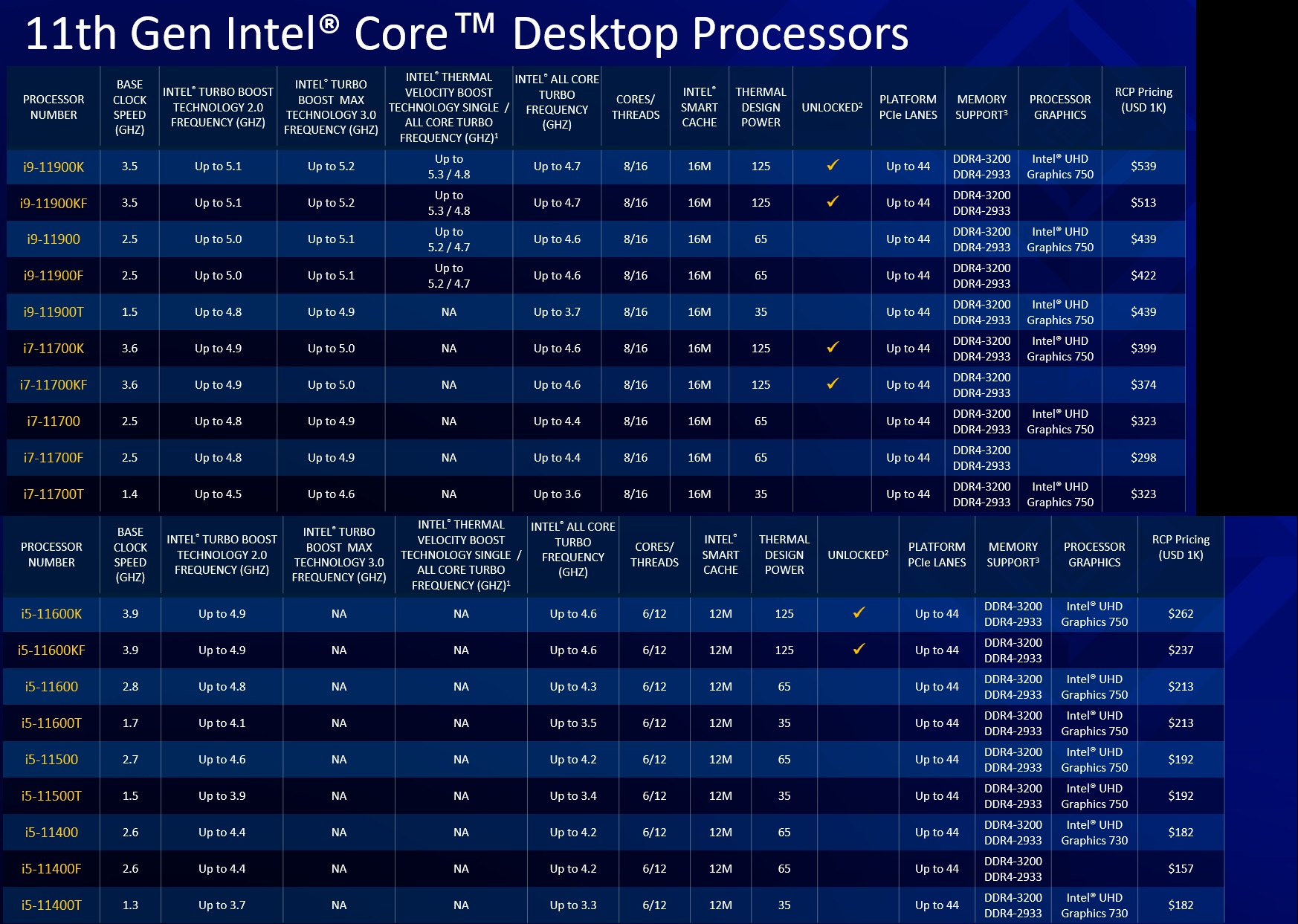 These are the new Rocket Lake S processors. The prices of the processors compared to their branding are almost the same as what we saw in the previous generation. Example input processors Core The i1 11400F maintains a highly competitive price tag, while an overclocked version such as Core The i5 11600K is sold at a price tag of just over $ 260 to compete with processors such as the Ryzen 5 5600X. High-frequency 8-core processors, for example Core You will find the i7 11700F with a price tag of about $ 300.

The flagship, the Core i9 11900K is priced at just over $ 530. This is a relatively tough price that comes in front of the Ryzen 9 5900X with 12 cores of AMD With only 8 cores. An interesting strategy, below we will see how it works for Intel.

Finally, Intel Makes the leap to PCI-Express 4.0 standard and this time the processors are equipped with another 4 lanes to enable the M.2 interface to the middle storage In the new speed standard in addition to all the existing traffic we knew in previous generation processors.

Other enhancements include natural support for 4MHz DDR3200 memory as standard, display interfaces with more advanced standards compared to the previous generation and also Resizeable BAR which is a technology that enables potential improvement of graphics performance with a variety of AMD and graphics cardsNVIDIA. 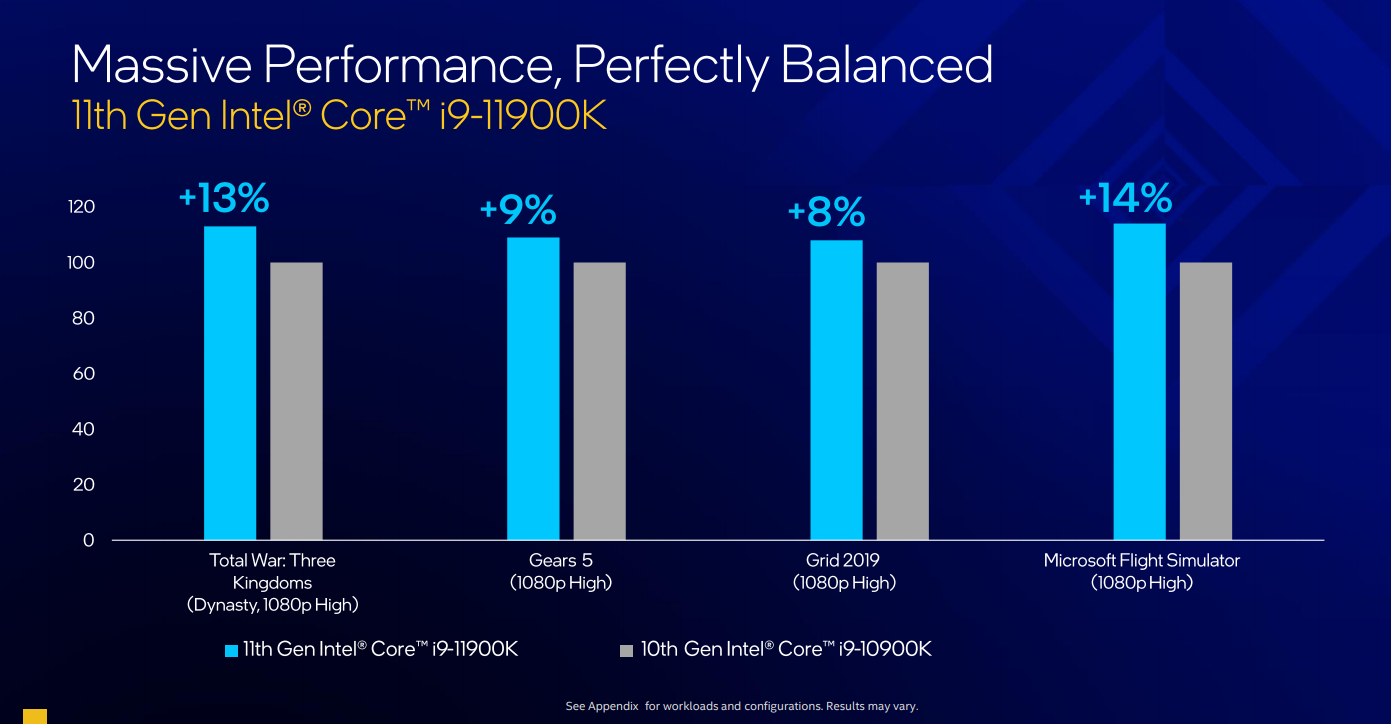 Intel's internal tests tell of gaming performance improvements over the 9-core Core i10900 10K that has so far been Intel's fastest processor for gaming, and sometimes the fastest for gaming even compared to processors AMD Different. 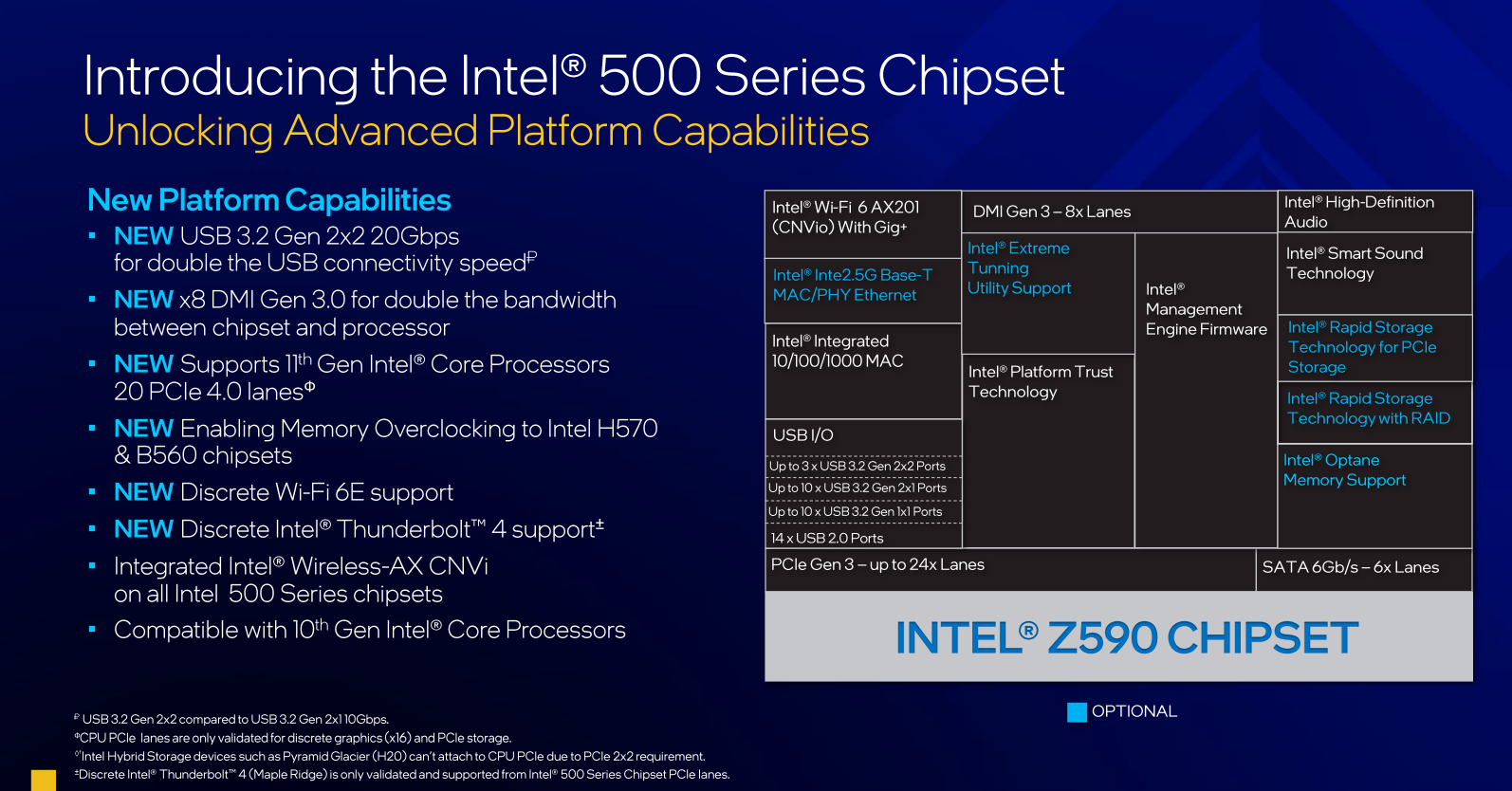 Along with Rocket Lake S processors, LGA1200's Intel Also gets a new series of chipsets when-Z590 Is in her head. There is a respectable list of connectivity improvements.

Now, the platform is getting a standard USB 3.2 Gen 2 × 2 at 20Gbps as standard. The traffic width from the CPU to the chipset is doubled to accommodate this traffic. In addition to standard upgrade PCI-Express For the 4.0 generation, Rocket Lake S processors get an extra M.2 storage interface compared to what was previously available in the chassis LGA1200.

As mentioned, H570 and B560 based motherboards are finally freeing from the memory limitations that have existed up to now on platforms Intel The variance. Using Rocket Lake S processors you can use the kits זיכרון Speed ​​as much as possible with these boards. It is important for Intel to make it clear that the new motherboards are also compatible with 10th generation processors.

The Core i3 segment of Intel Wins except rest and renewal. Processors Core The existing 3th generation i10s get a new coat of paint and they will be used as a budget choice alongside Rocket Lake S. processors which means we are not getting the new features here as Core Improved graphics, ultra-fast memory support or performance enhancements to the processing cores themselves.

A notable processor to note among all of these is theCore i3 10105F (ten thousand one hundred and five nos? ten ten five nos? can be shortened?). This processor is expected to be a choice of Gamers Many with a limited budget thanks to its relatively fast cores and price tag of less than $ 100.

At the end of the month we will present you with detailed reviews about processors Intel The new ones and a variety of motherboards along with comparisons to the existing competition - worth staying updated!