Now is the time for Radeon

The wait is over - we conducted performance tests in a variety of games for the new video cards of AMD Samples Radeon RX 6800 XT andRadeon RX 6800. All numbers here

Today officially takes place one of the most important hardware launches in the graphics world in recent years, when the Radeon brand of AMD Wants to make the comeback that many users crave.

This day is especially important for the world of graphics and gaming simply due to the market situation in recent years. NVIDIA, Best known for its state-of-the-art graphics cards, is a hand-held mastery of the gaming world of desktops and laptops. For most of the last decade, when they wanted the most advanced video cards, they always found GeForce branded ones. NVIDIA. This is thanks to its efficient and advanced architectures, even when prices were not always accessible.

Currently, the last time AMD's Radeon brand competed with Geforce for the top edge of video cards was in 2013. With the Radeon R9 290 series versus the GeForce GTX 780 And GTX 780 Ti. The performance was quite competitive, and the power differences were not very large either. A year later, launched NVIDIA The famous GeForce GTX 900 series starring the GTX 980 and GTX 970 when the GTX 980 Ti was the icing on the cake, just to make sure Radeon products are well buried under a pile of GeForce products. The answer of AMD There was a launch of those graphics cards with new names and double the amount of memory under a series Radeon R9 390.

Over the years, AMD has continued to launch video cards, but these were mostly those that compete with the mid-range market and also a bit in the high-end market, Was an RX 480 Which did not particularly excel in electrical efficiency, and thereafter It is refreshed as an RX 580. These graphics cards competed mainly against NVIDIA's GTX 1060. We then got the AMD RDNA architecture With the launch of the RX 5700 XT And the RX 5700 which actually showed not bad performance against the corresponding video cards of NVIDIA, But have not yet had dizzying commercial success. True, toNVIDIA There were still a number of more powerful models that dominated the top end of the market with RTX 2080 Ti andRTX 2080 side RTX 2070.

Now, for the first time since 2013, we get according to AMD a real chance for advanced video cards for gamers who want the best that exists, or at least very close to it. Since 2013 AMD has changed from end to end, learned to make the fastest desktop processors, learned to make flexible architectures for consoles that sell for tens of millions, and now it's coming to the arena for another round with NVIDIA. The big battle is the Radeon RX 6800 and Radeon RX 6800 XT against GeForce RTX 3070 and-GeForce RTX 3080.

AMD's new pair of video cards are priced at $ 649 and $ 579, respectively, compared to the existing NVIDIA Priced at $ 699 and $ 499 respectively. One can learn a lot about the performance intentions of products of this type according to the price the manufacturer decides to give them. as it were, AMD Pricing the RX 6800 XT for $ 50 less than the RTX 3080 aims to kidnap potential users with performance that should be at least equal. The higher price of the RX 6800 compared to the RTX 3070 suggests thatAMD Very sure her card will be worth the extra price as a result of higher performance.

The road to new architecture

We start whereAMD Started on the way to designing the architecture that drives its new video cards. The architecture behind it Radeon The RX 6800 is theRDNA 2 which she designed based on the previous generation we knew in last year's RX 5700. 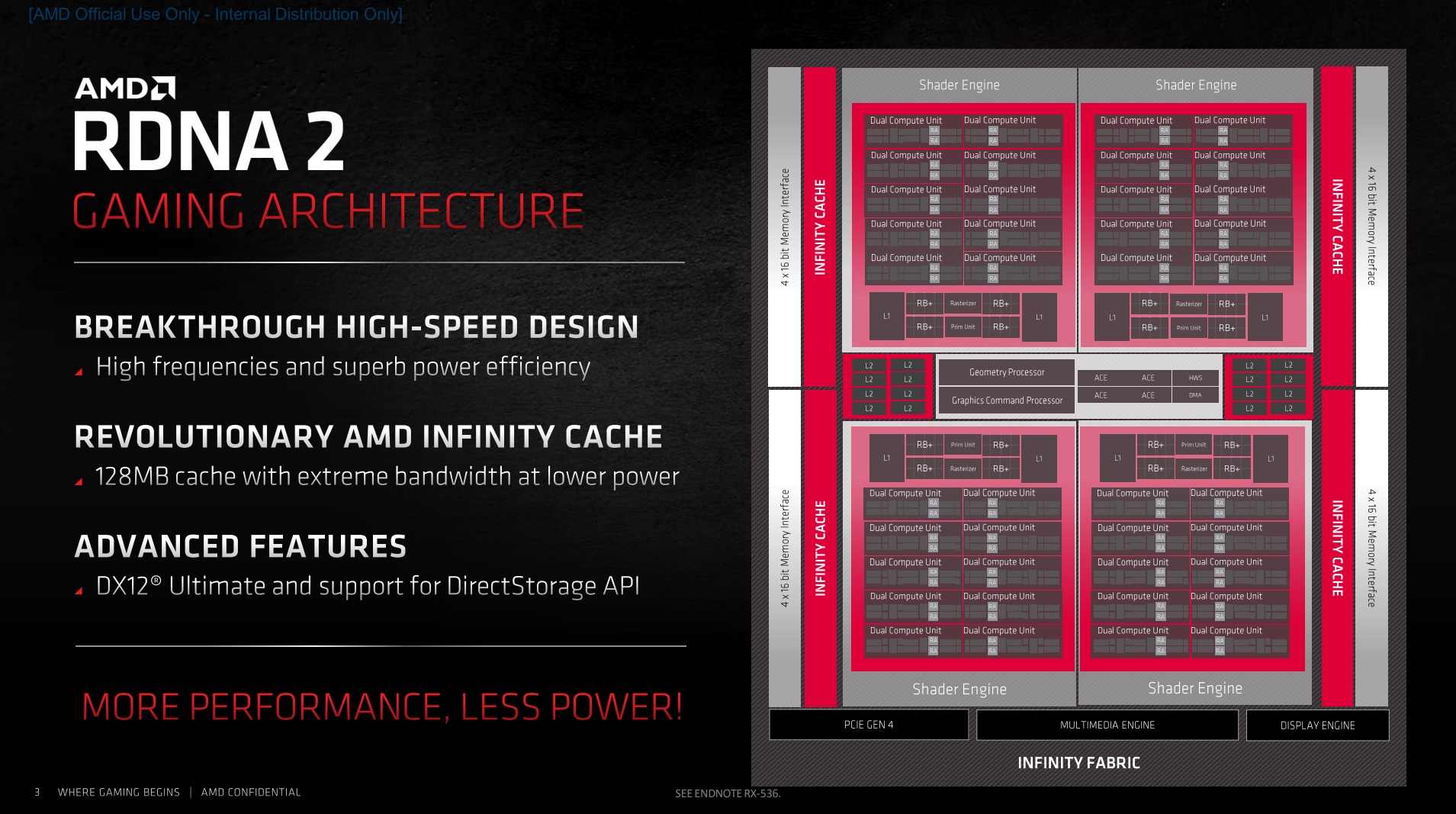 This architecture like its predecessor is manufactured in the famous manufacturing process of the TSMC plant at 7 nanometers. This is exactly the same process in which TSMC also manufactures the silicon behind the Ryzen 5000 processing cores. In fact, AMD Gets to the point where she chooses how to allocate the production lines she gives her TSMC Factory.

Among the goals of RDNA 2 - improving electrical efficiency, improving performance per clock cycle and providing a silicone solution for all dedicated performance layers. The full core of RDNA 2 contains 80 processing sets compared to only 40 we knew in the RX 5700 XT. In addition, there is זיכרון An especially large third-level cache. 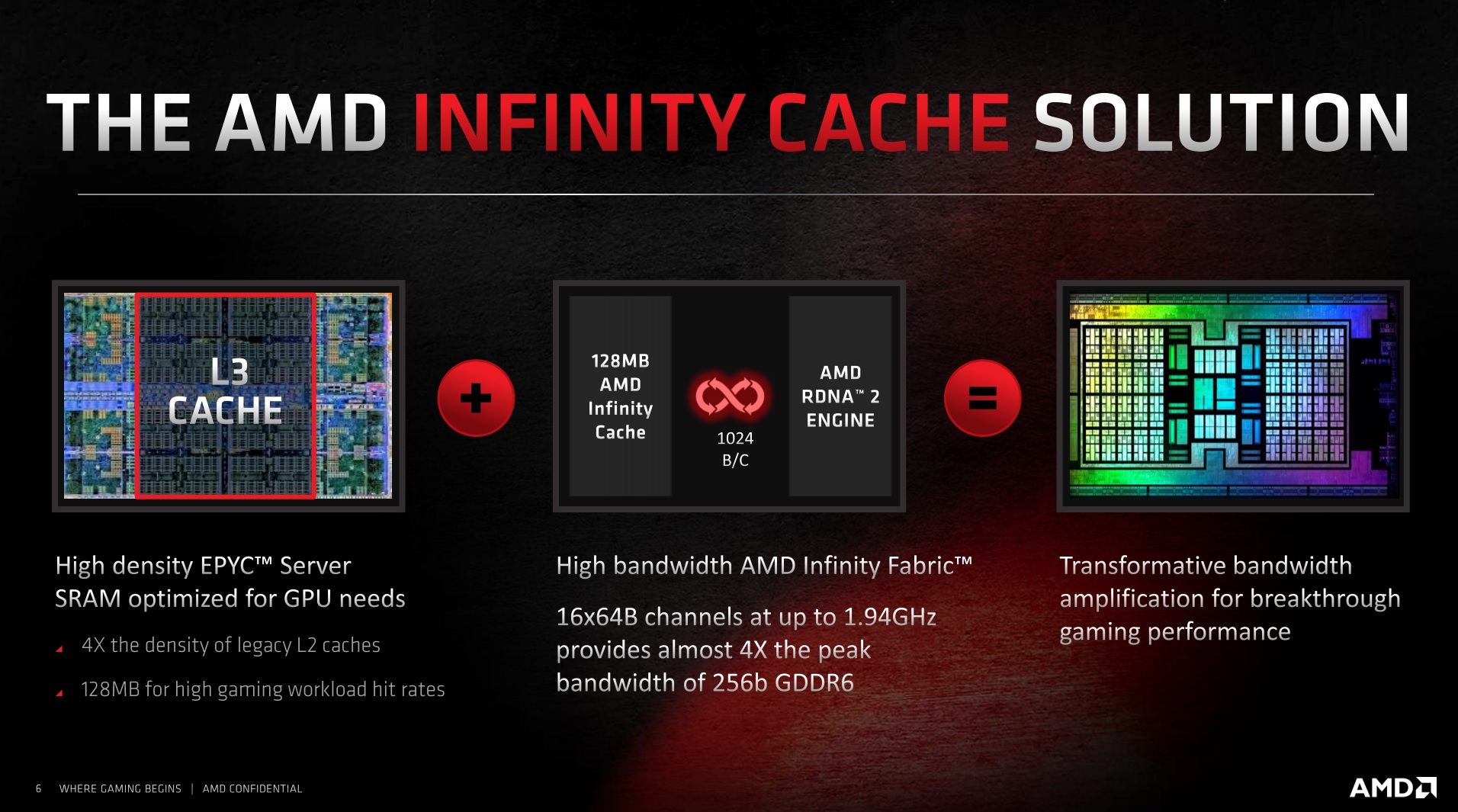 Experience of AMD With its Zen processors it teaches it that third-level cache memory is a very important component of CPU performance. At the core of RDNA 2 decided AMD Apply this principle, call it Infinity Cache and equip the 128 MB core of it זיכרון Rich cache. This large memory pool will quickly feed the various processing cores with essential information for graphics output.

Due to cache enhancements and other algorithms in architecture, all that this chip needs is a 256BIT wide memory controller to communicate with the graphics memory in the printed board. Such a lean controller saves a lot of resources compared to using wider controllers. AMD Decided to raise the bar and increase the amount of available graphics memory to 16GB of type GDDR6. This volume definitely gives a relative advantage over the competition, the video cards RTX 3080 has 10GB andRTX The 3070 has the 8 GB.

In each of the processing groups in this graphic core, two components designed for Ray Tracing are also connected. Yes, with this launch, NVIDIA It is no longer the only one with dedicated hardware for Ray Tracing in video cards. It's important to understand that when it comes to silicone real estate, AMD's investment in Ray Tracing processors is significantly more modest than the large percentage of silicon at its core. NVIDIA Recent for this purpose. In order to enjoy Ray Tracing technology it is important to know if the game supports it. The technology is called DXR or DirectX RayTracing and is only available on certain DirectX 12 titles, just like some RTX technologies exist. NVIDIA. 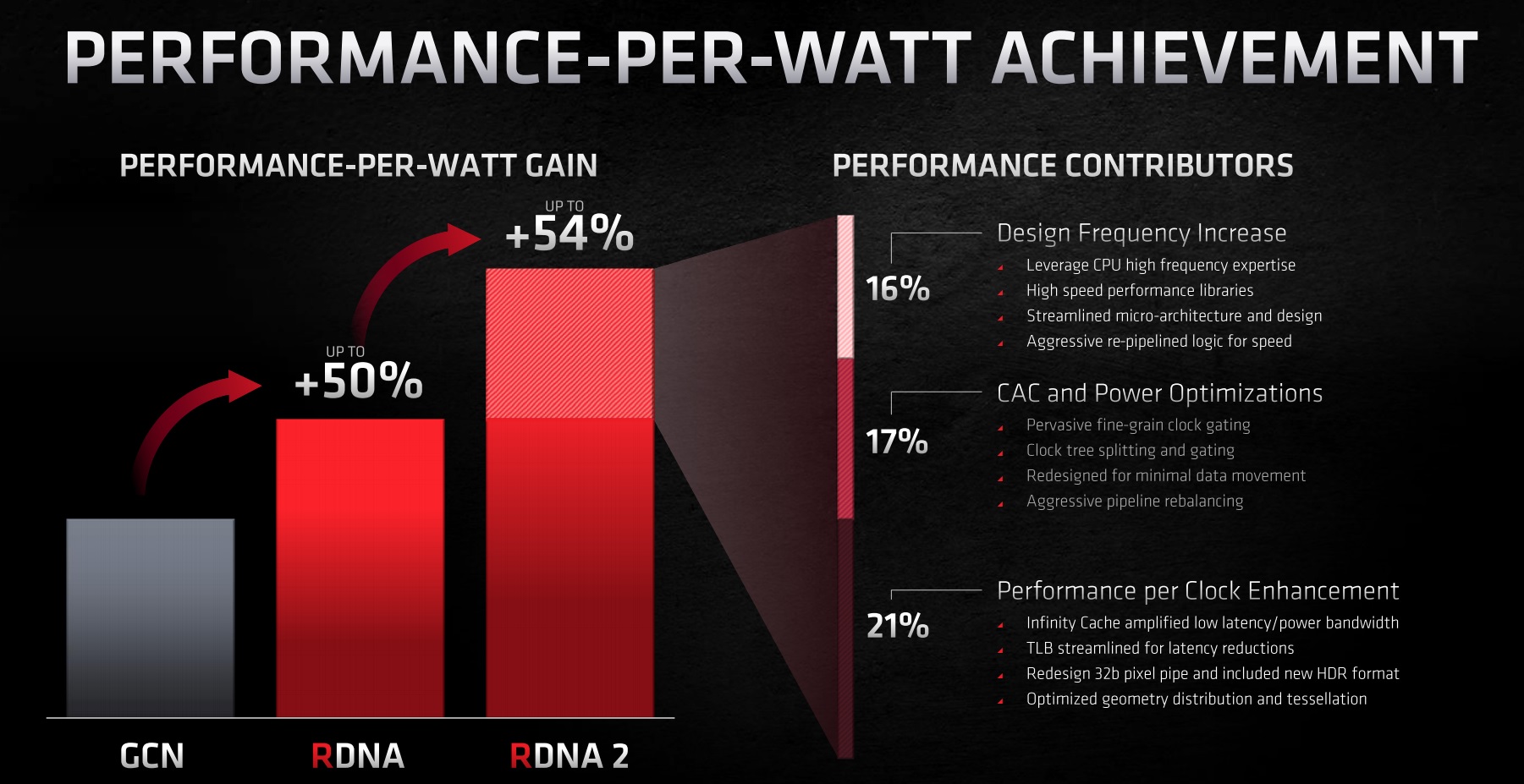 AMD predicted another era RDNA The first to improve 50% in electrical efficiency once again in the transition toRDNA 2 As it did in the transition from GCN, the generation of RX 580 graphics cards preceded the RX 5700. With generation RDNA 2 claims that the actual improvement has exceeded expectations and stands at up to 54% in electrical efficiency. 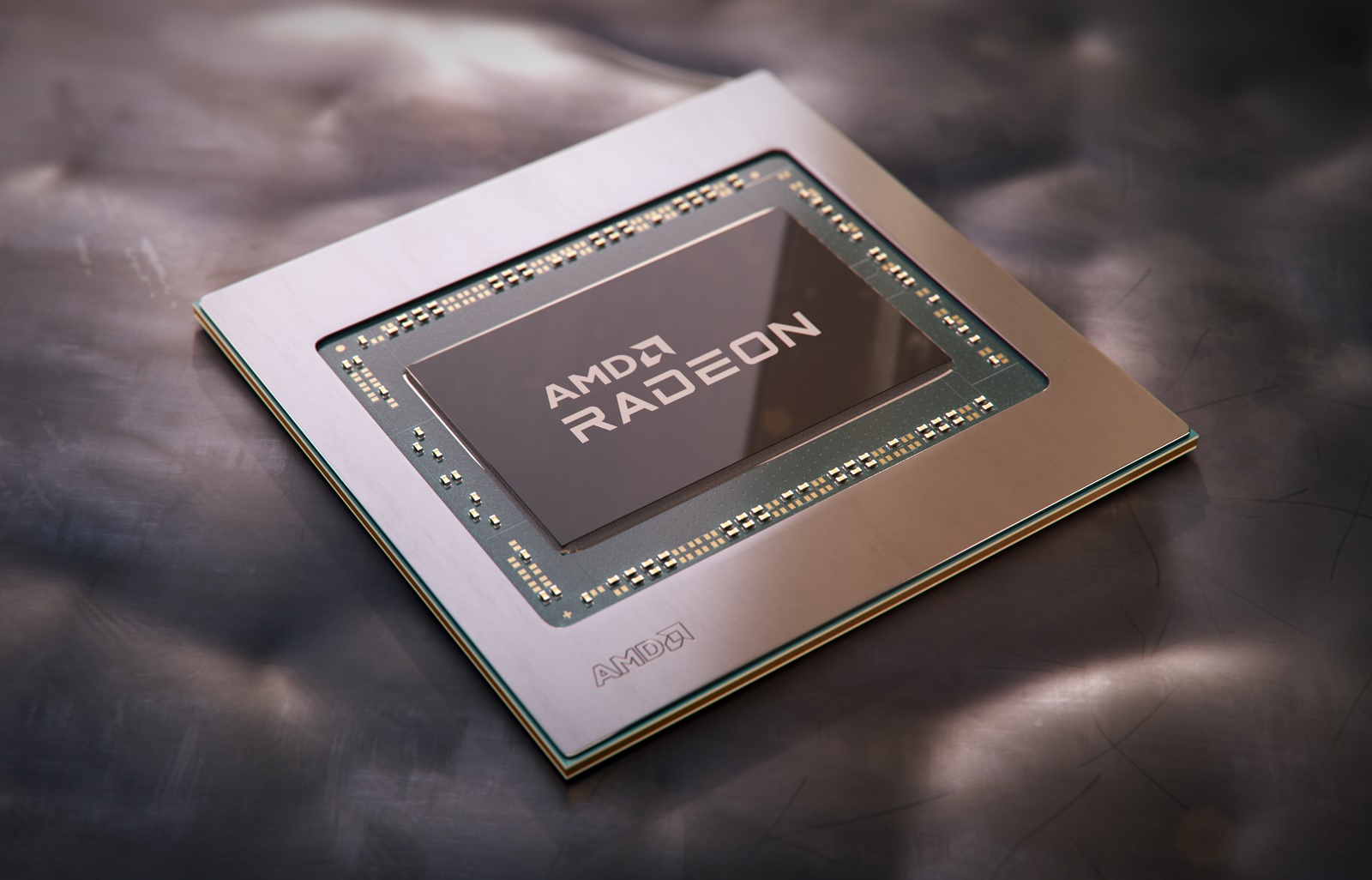 The product of an allotment of improvements along with the commitment to a large and expensive silicon space gave birth to the NAVI 21 core.Radeon RX 6800 XT, theRadeon RX 6800 andRadeon RX 6900 XT. Area Core Of 536 square millimeters in the production process of 7 nanometers is one from which a number of products can be manufactured RYZEN With high gross profit, and yet, due to the need to supply a product to the world of graphics, we get all this silicone for a single video card. 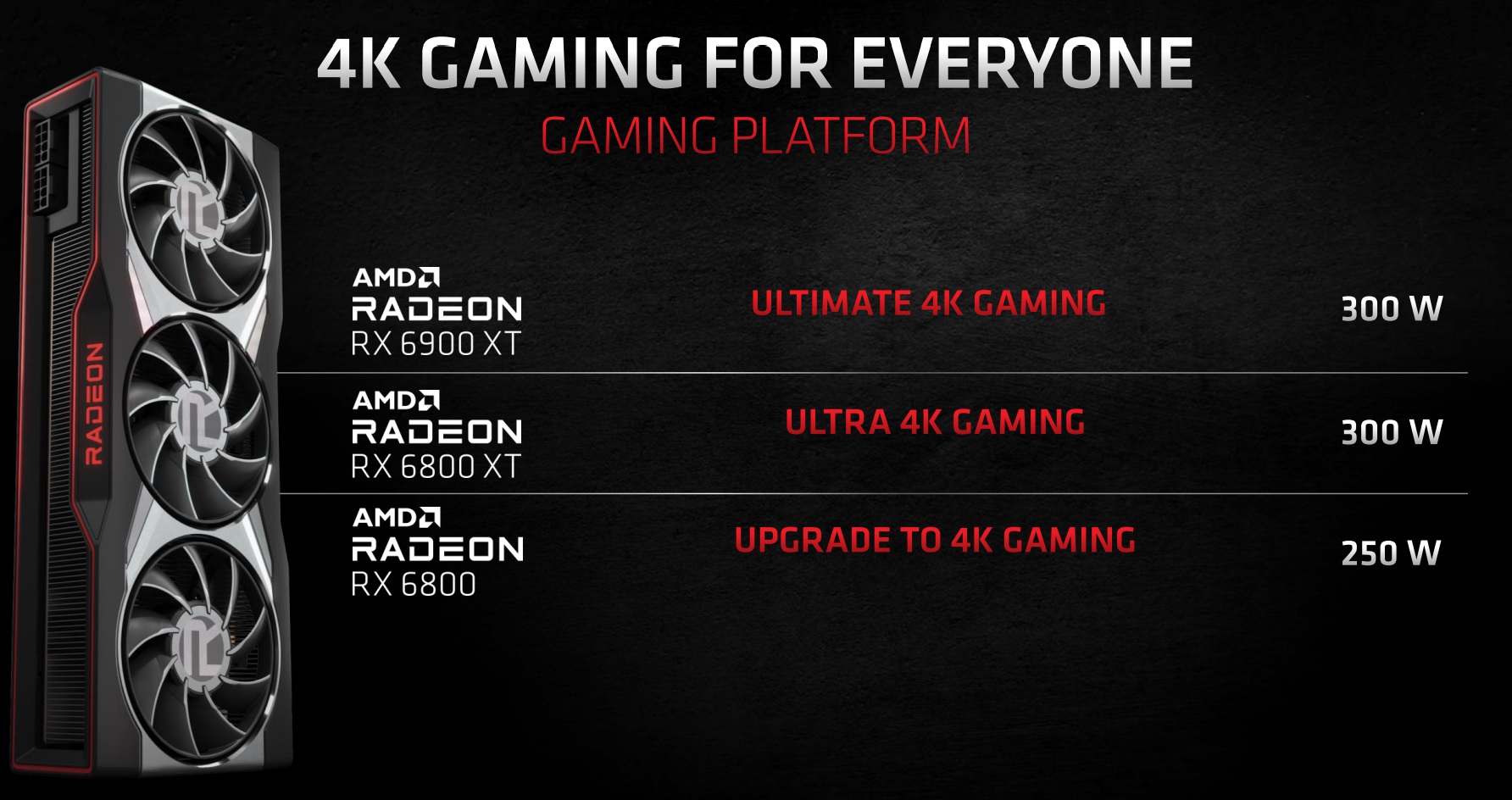 The Radeon RX 6900 XT video card is the one that contains all the 80 processing sets available in this core. The graphics core of the RX 6800 XT contains 72 of them, while the RX 6800 contains only 60 of them. Such segmentation allows the creation of a product with different performance at different price tags, even if the quality of the silicone is slightly less quality. The heat envelopes of the two carriers are 300W and that of the RX 6800 is 250W. The reason for the heat envelope is the same even in a model with more active hardware according to AMD Is that the high level of silicon allows this without requiring more electricity. 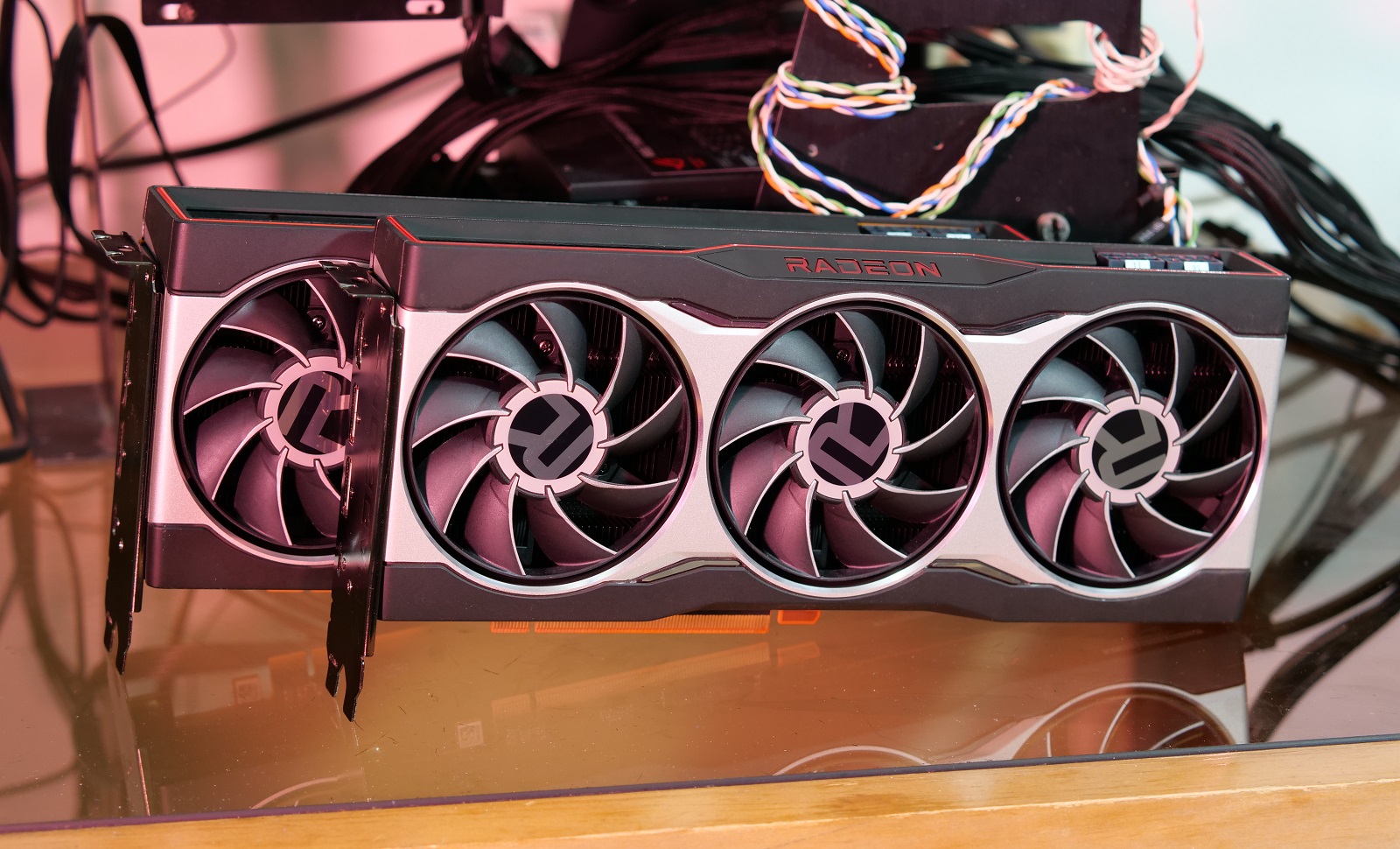 As we presented Slowly the pictures of the products - The two video cards that are launched today are the RX 6800 XT and the RX 6800. The RX 6900 XT video card will be launched at a later date. 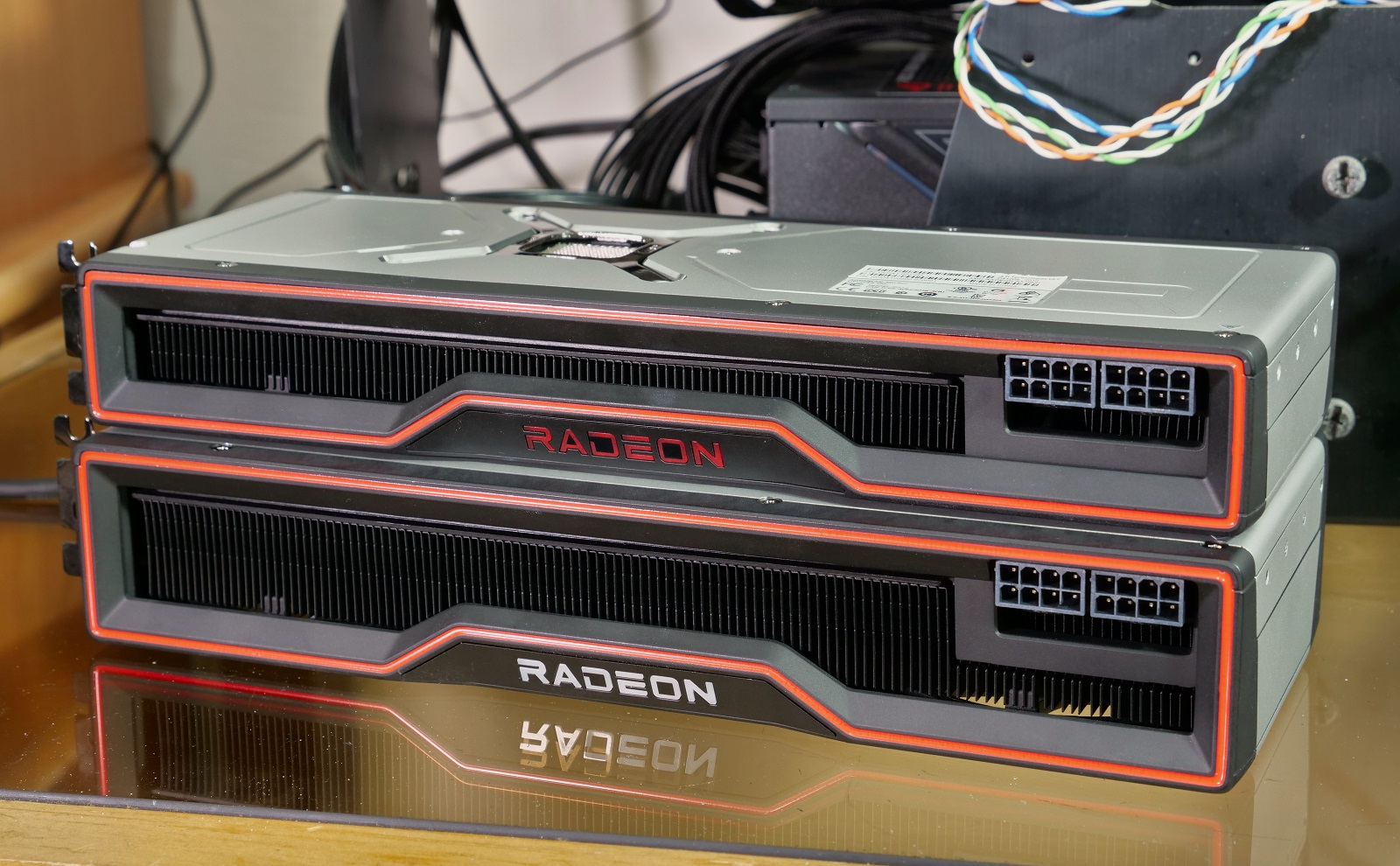 These graphics cards are 26.7 inches long. Their height is 12 inches. The RX 6800 XT is thicker, 5 inches. The thickness of the RX 6800 is 4 inches. Both of these video cards require a pair of 8PIN power supplies PCI-Express. 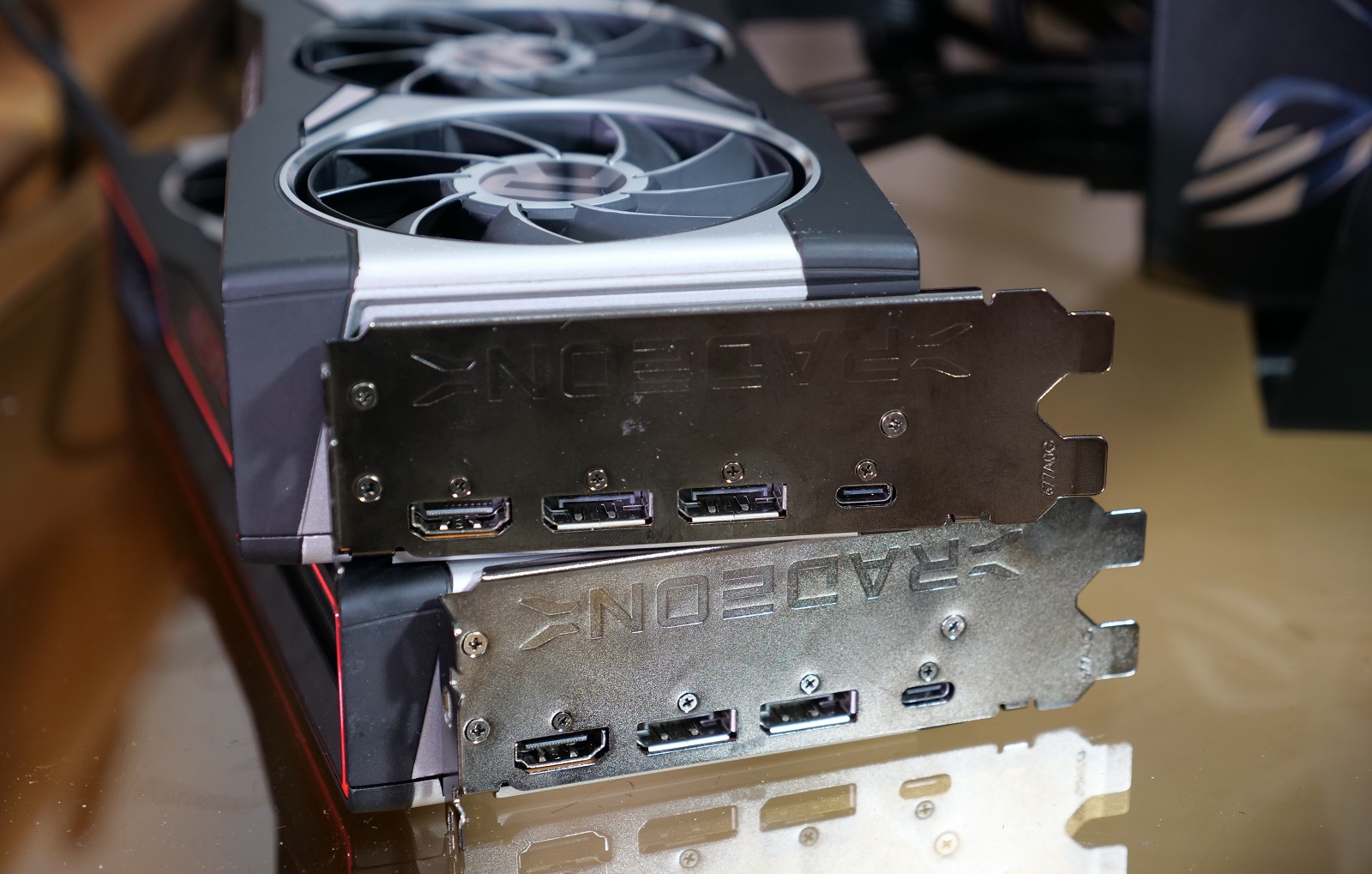 The display interfaces include two of a kind DisplayPort 1.4, one HDMI 2.1 and one Type-C protocol DisplayPort 1.4. All four ports can be used simultaneously.

Exclusivity for a target audience devoid of purchasing ability

Before we get into the performance tests for these video cards, there are some general features that are worth getting acquainted with. AMD. 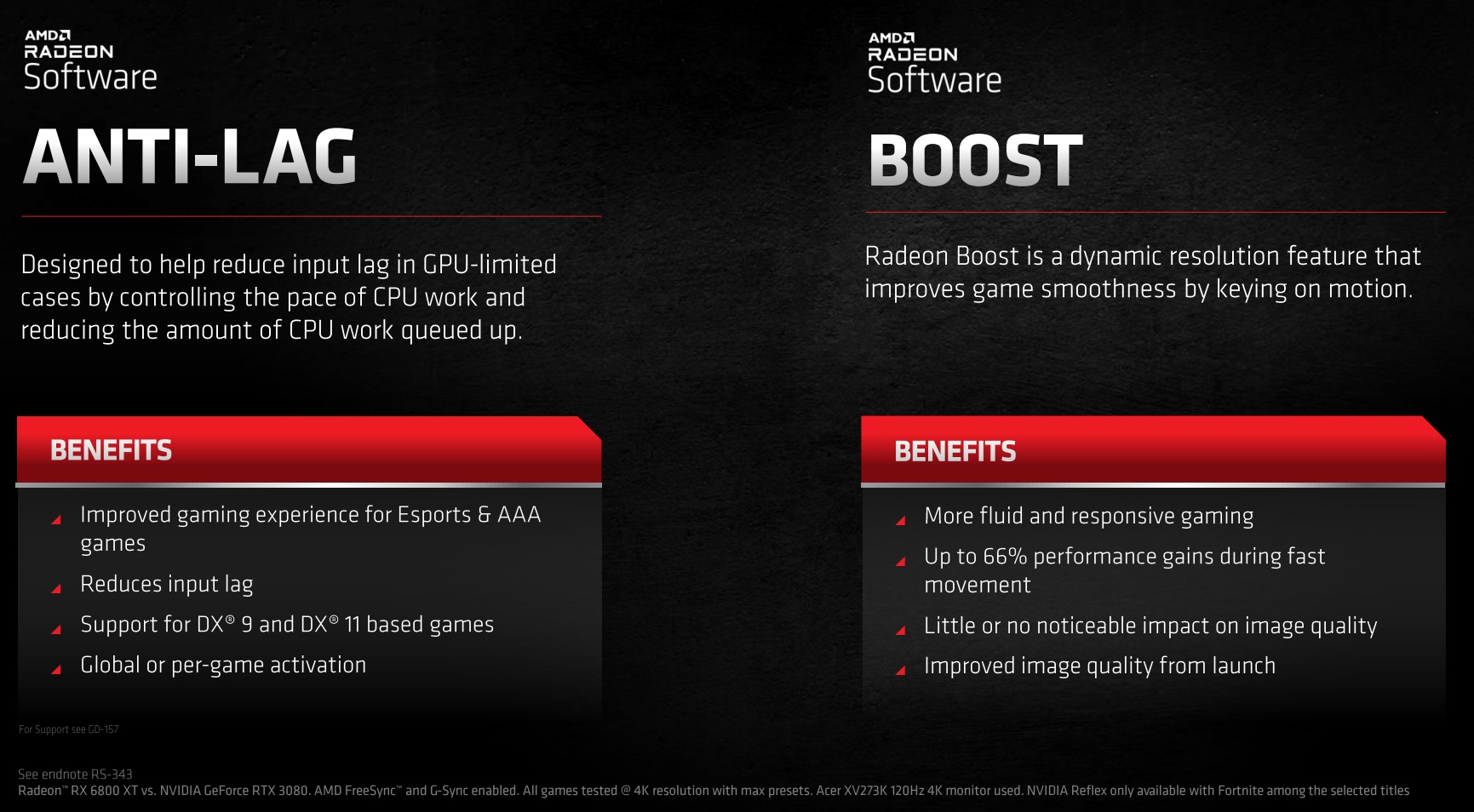 Anti-Lag technology is one that allows for a reduction in response time between typing or using a mouse to output on the screen by using synchronization of frame processing between the processor and the video card. Technology Radeon Boost is one that allows a dynamic change of game resolution in order to improve the amount of frames per second you get, especially useful in games ספורט Competitive of all kinds. 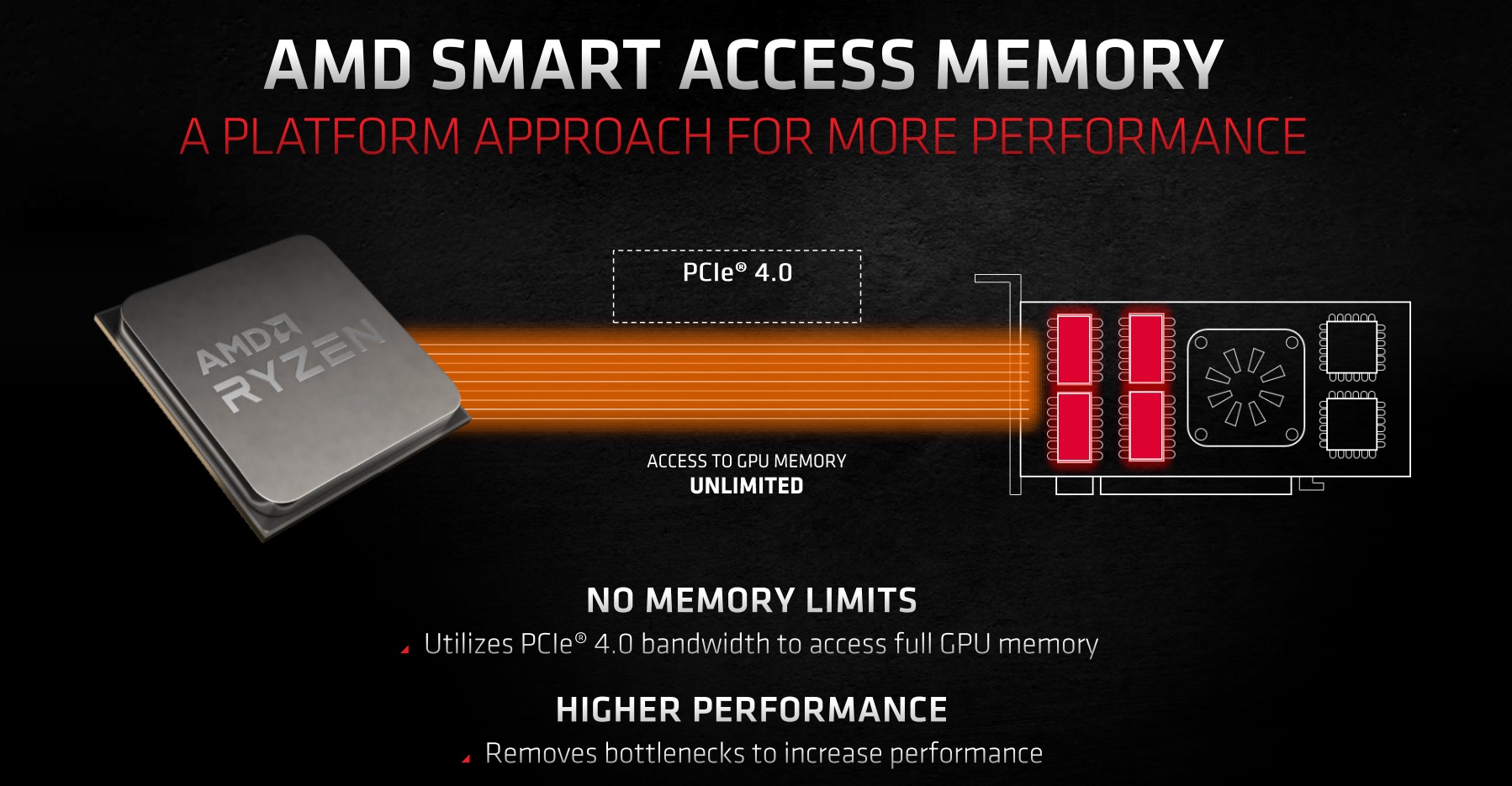 Another interesting technology launched with the Radeon RX 6000 series is the SAM or Smart Access Memory. Anyone familiar with the hardware of game consoles knows thatAMD Developed together with Sony a method for faster storage and retrieval of graphic information from the system volume in the system to the video card. Here AMD Decides to enable this technology for the desktop computer user as well. However, there are a host of restrictions. The first and rather painful one is that this feature is only possible with processor use RYZEN 5000 launched right now and still very difficult to obtain.

The second feature required is the use of a motherboard with 500 series chipsets such as the B550 or X570. According to AMD Performance improvements can be seen in a variety of games which range mainly from 0% to 5% while there are also rarer cases where improvements of between 6% and 12% can be seen.

We fully expect a variety of media around the world to fairly broadly cover the performance improvements resulting from the use of this technology. Although, it is very important to note that even before the launch today noted NVIDIA Explicitly because it too will bring the use of this technology, when it will not even require a special processor or motherboard. In order to appeal to the vast and overwhelming majority of the target audience of these video cards, and also to give an opportunity toNVIDIA Launch its technology (andAMD Respond with the opening of the extreme lock) - we will examine the series Radeon RX 6800 versus other series of video cards on the same platform Intel Neutral on it we have so far examined all the new video cards recently. Therefore, it is important to take the results in the proper context.