The fateful day of AMD came

Somewhere around the end of 2010, the processor world was very excited to launch the first Fusion models AMD, Based on architecture New as Bulldozer Which promised to provide efficiency and competitiveness that we have yet to see. The new processors of the chip maker did help the graphics core built on the same chip together with the main processing units to become the new standard in the hardware market, but disappointed with the performance itself and put the market in a situation where competition in the technological aspect has decreased significantly.

Today, we feel very similar excitement, With AMD officially launching three first models of the Ryzen family, With architecture Zen Brand new - which according to everything we see so far is the redemption that the company has been looking for, and we have also been looking for, in all the last six years, and will be able to regain much of the competitiveness we have lost.

Three new models from AMD Come with no built-in graphics cores, as direct replacements to the company's FX processor family that was launched five years ago and since then has remained orphaned with only minor updates that have not really improved their relative lack of competitiveness. All three models include no less than 8 physical cores and 16 logical cores (thanks to a technology called SMT, which is equivalent to HyperThreading in Intel products), with new AM4 chassis, new chipsets, open frequency multipliers, and support for all the latest technologies In a market that we lacked in other products AMD In recent years.

The Ryzen 7 1800X will be the top product, with a basic 3.6GHz working frequency, a maximum 4GHz turbo frequency and an attempt to compete directly with the Broadwell-E's top pair of models Intel, Which are priced at more than 1,000,RYZEN The 7 1700X stands out as the most competitive potential choice with a base frequency of 3.4GHz, a turbo frequency of up to 3.8GHz and general characteristics very similar to its sibling but with a significantly lower price tag - and theRYZEN 7 1700 will be the economical choice in the family, with a small thermal envelope of 65 watts, a base frequency of 3GHz and a turbocharged frequency of up to 3.7GHz.

All models will be offered with a new and improved generation of dedicated coolers (with different models for the X models that require greater heat dissipation and for the more "modest" Ryzen 7 1700 model), and with a controller DDR4 Dual channel memory support at base speed of 2,400MT / s or 2,666MT / s speed.

And the prices? 500 Dollars (without taxes) as the official price tag for the top model Ryzen 7 1800X in Uncle Sam's country, 560 EUR for the same model together with taxes in Europe, 400 USD without tax for the Ryzen 7 1700X and 440 Euros respectively in Europe, 330 USD and 360 Euros to Ryzen 7 1700, enabling it to become a direct competitor for the new Core i7-7700K Intel, With a smaller power envelope and a double number of processing cores at almost the same price.

There is a charge for the fee

Not everything is perfect for the processors.RYZEN And there is no doubt that price tags that start at the top of the mainstream market are not suitable or relevant to everyone.

The acceleration potential seems to be lower than that of the competitor's processors, the new and talked about XFR technology does not really manage to surprise, the SMT technology does not work properly in certain situations and degrades performance instead of improving them and a non-standard DRAM design may cause it to run low. Relatively dependent on data that we would not usually pay attention to - but the bottom line is the dozens of reviews released to the network in one fell swoop at the time of removing the information embargo from AMD Prove that this is exactly the leap of the great step we hoped. The Zen cores are able to display a performance level similar to that of the Broadwell cores Intel, More or less, and thus achieve an improvement of approximately 40 relative to the last incarnation of the C-Bulldozer, Just as they promised us more during the past year.

The new models of AMD Are able to achieve performance in games close to that of modern processors Intel, Both square, hexagonal and octagonal - and this is a big row after years in which the company's processors were a big and disappointing bottleneck in the field, with capabilities that sometimes did not even keep pace with the processors.Core i3 Duplicate. Add to this performance very similar to those of the processorsBroadwell-E in processing applications that know how to properly utilize a large number of processing cores, and have received a product that actually delivers the best of both worlds: no significant inferiority in gameplay and multi-core advantages in professional applications at a price that is half or even less than the price we've known to date With eight cores.

AMD has done a tremendous and admirable job here, and today users will have a much more difficult dilemma choosing the components for their new home system.

A bright future with many question marks

What we see today is only the tip of the iceberg, naturally, and awaits us much more in the not too distant future. There are already reports and predictions that Intel will cut its Kaby Lake processor price to keep it competitive AMD And Ryzen, but we are not convinced that this will happen, at least not before we receive the launch of the Ryzen 5 and Ryzen 3 processors with price tags of less than 300 dollars and real direct competition for the mainstream of Intel What is certain is that the chip giant will have to find new methods to make its home HEDT processors more competitive, now that there are offers on the market with the same number of cores that are several times lower: perhaps by further increasing the number of cores, perhaps by cutting prices and as much as Apparently by some combination of the two.

For her AMD, This development deserves to be considered very successful, and one from which one can only continue to grow - with Processors New and more common, and renewed interest and collaboration by application and game developers to better utilize the new set of Zen commands and technologies, Processors Combined Core New graphics that could offer eight processing cores for the first time ever, a revival of the product line for the mobile market that has almost completely disappeared in recent years and the like.

Add to that product launch plans for the world of servers and powerful computing with an almost unimaginable amount of processing cores, Zen + generation design with improved performance, a breakthrough in production production with 7 nanometer technology, perhaps in two years as part of the collaboration with GlobalFoundries - and possibly the launch of processors A home market with an even larger amount of processing cores, and you got the variety of reasons why we can feel quite comfortable announcing that we are here at the beginning of an absolutely new and exciting computer age. We will keep our fingers crossed that from now on everything will work smoothly for both AMD And for Intel - And we can see this technological competition thrive once again, in a way that will benefit all of us and remind everyone that the world of PCs is still here, still alive and kicking and still relevant and innovative. 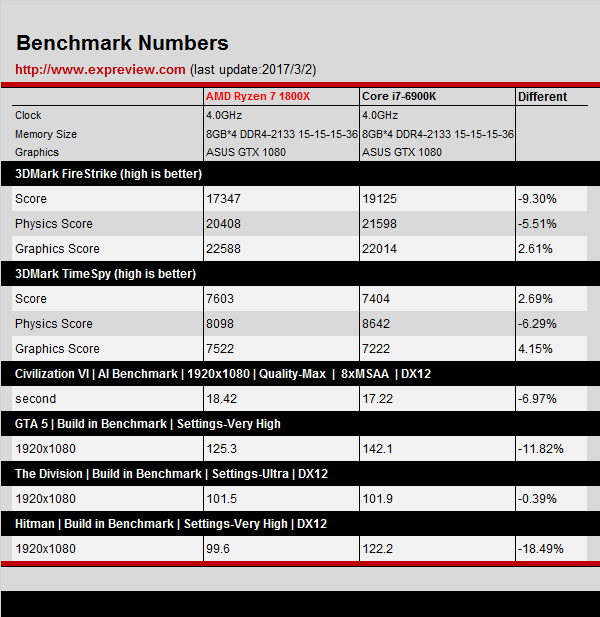 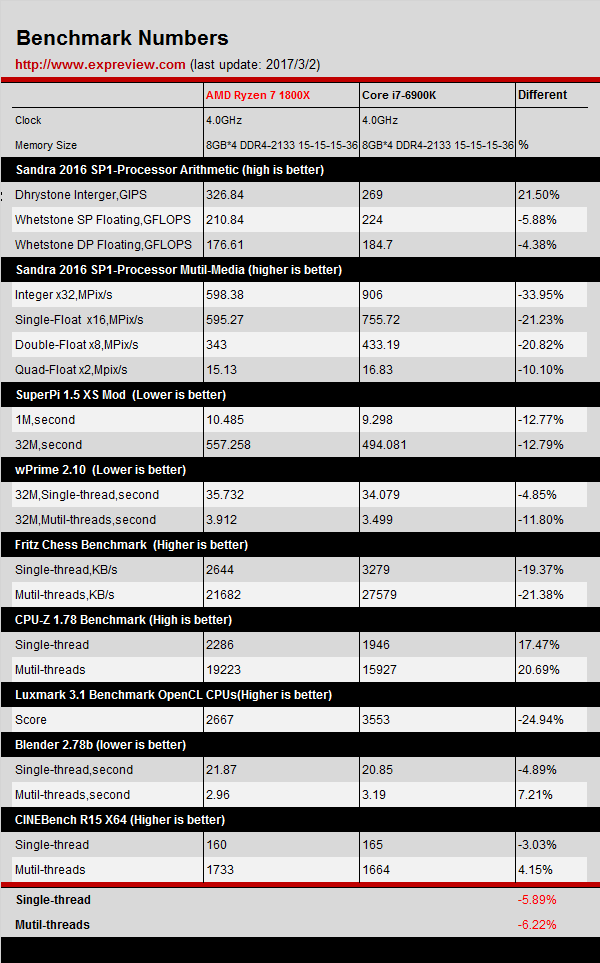 A few more numbers that help prove that AMD Manages to provide a similar level of performance to a processor with a market price of $ 1,000 - for only $ 500
Source: picreview.com

So are you already planning a new system for yourself based on RYZENOr not really? Share it in comments!

updating: The people of AMD Have already officially addressed the questions that have arisen in the context of many reviews about significant differences to the detriment of theRYZEN, Precisely when titles were activated at a relatively modest FullHD resolution where we should not see any performance limit on the part of the CPU.

The company stated that the source of incompatibilities compared to high resolutions and maximum graphic settings in which the chipmaker's condition is usually much better is the lack of adequate matching of many titles to the latest processors that have only reached the stores, Development Which they send and send to a variety of developers in the world -PC Across the globe, and we believe this is the place to assess that in general there is a pretty good chance that the launch of the processors -RYZEN The multi-core processing will reinforce the emphasis we are developing on harnessing this resource - and bring us closer to a day when we see more and more games blossoming with six, eight and maybe even ten physical processing cores behind the wheel, similar to the gradual transition to high-quality four-core processing over the past decade.