For the Ryzen 3000 processor exams, which landed in our door just a few days ago, we formatted the existing testing system and created one clean and ready. 10 1903 windows were installed together with the updated drivers of the X570 chipset that we were given fromAMD.

At this time and due to time constraints, the Ryzen 2000 processors have not been tested but are expected to be added to the database soon. You can see their outbursts in a processor review AMD The following.

The technical specifications of the processor testing system include: 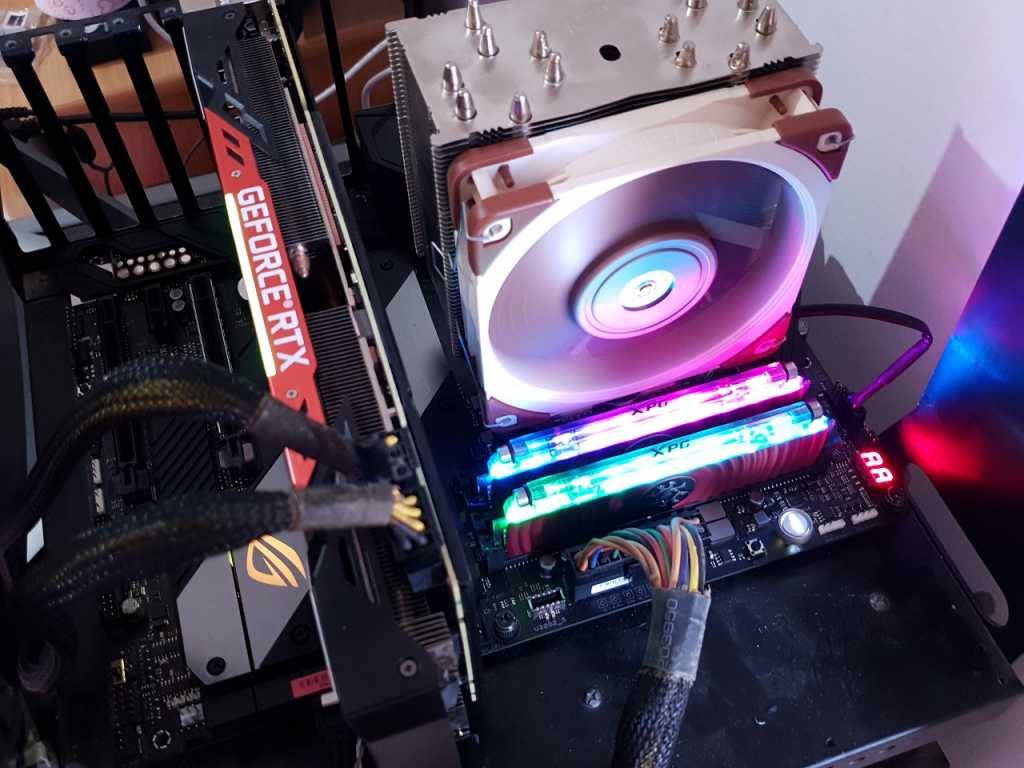 I decided to choose the RTX 2080 video card to be the basis of all gaming exams due to the fact that its graphics power is similar to many advanced video cards that are expected to be available this summer such as RTX 2070 Super, RTX 2070 and the family Radeon RX 5700. Although it is the strongest in this group, it represents the performance between 350 and 500.

The goal is not to create a bottleneck as large as possible for processors, but to create a feasible state for an advanced computer system that will be purchased or upgraded this year or later. Exam resolutions are 1920 × 1080 and 2560 × 1440.

Built-in CPUs did not let you go crazy with frequencies and auto overclocking. Intel uses a standard turbo, andAMD In XFR which is the equivalent technology. If any Overclocking, It is specified in the frequency named CPU. 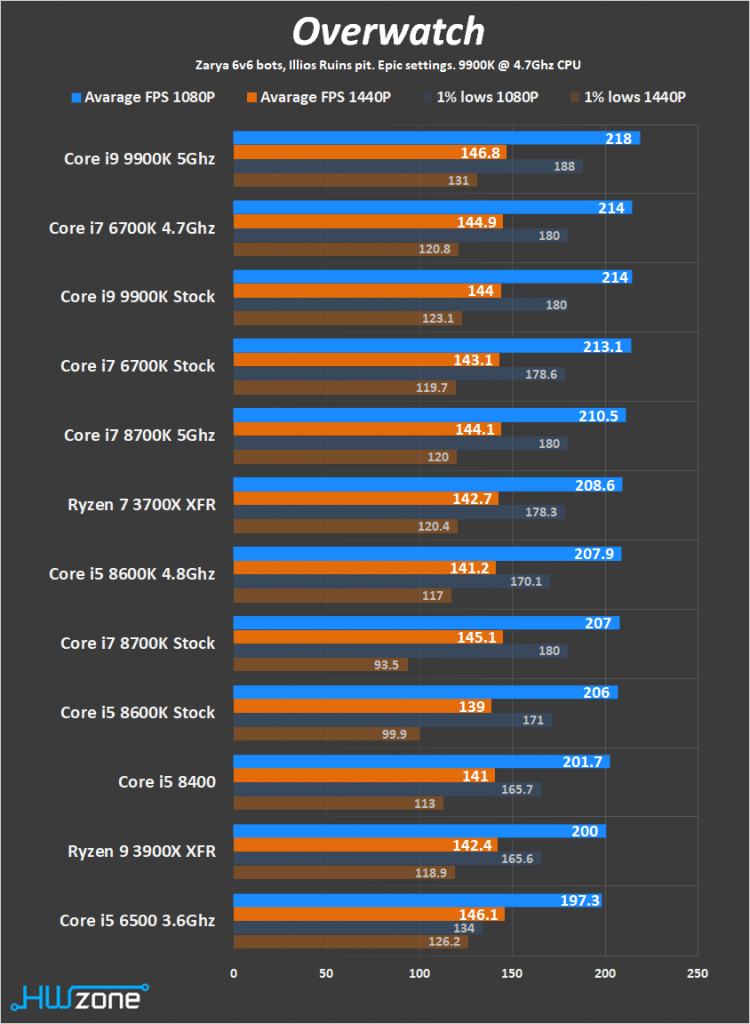 Let's start the games. With Overwatch the charts are fairly flat, roughly because this is the status of processors currently in gaming for this type of gaming. However, pay attention to the minimum frame rate of the lowest one percent. The new Ryzen processors have good stability and they survive the falls that other resource-poor processors do not survive so well. God-core i9 9900K remains at the top of the tabla. 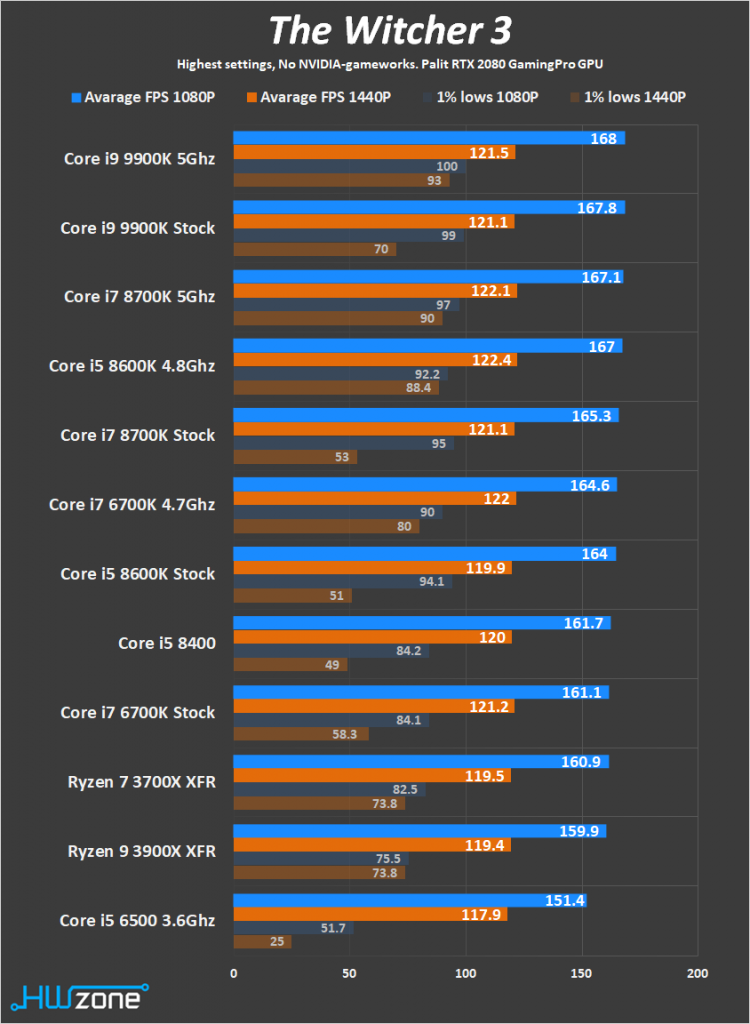 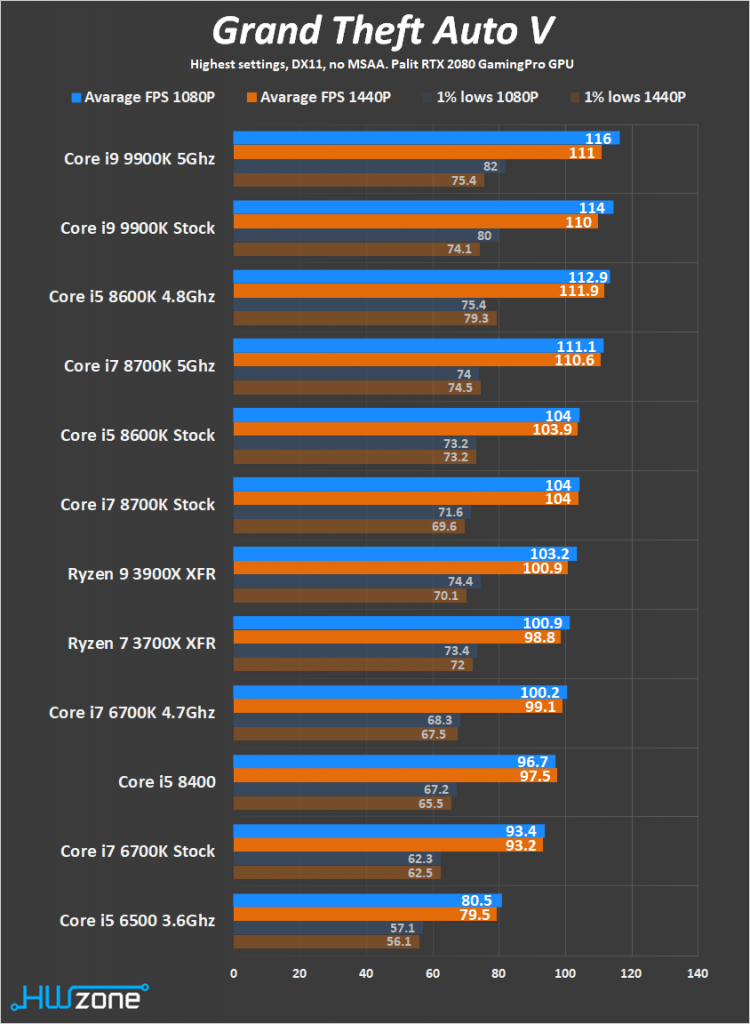 The GTA V game was launched before the first Zen architecture was even available, and this is a somewhat problematic game for my employees AMD Because of this. However, it seems that the new Ryzen processors know how to deal well with the game, although not at the highest performance as processors core i7 andcore i9 modern.

The new Tomb Raider is a game with rich graphics and quite a large amount of elements in every scene. In 1080P, where the processor is slightly larger, we see them a bit behind, but in 1440P they line up without problem with the fast gaming processors. 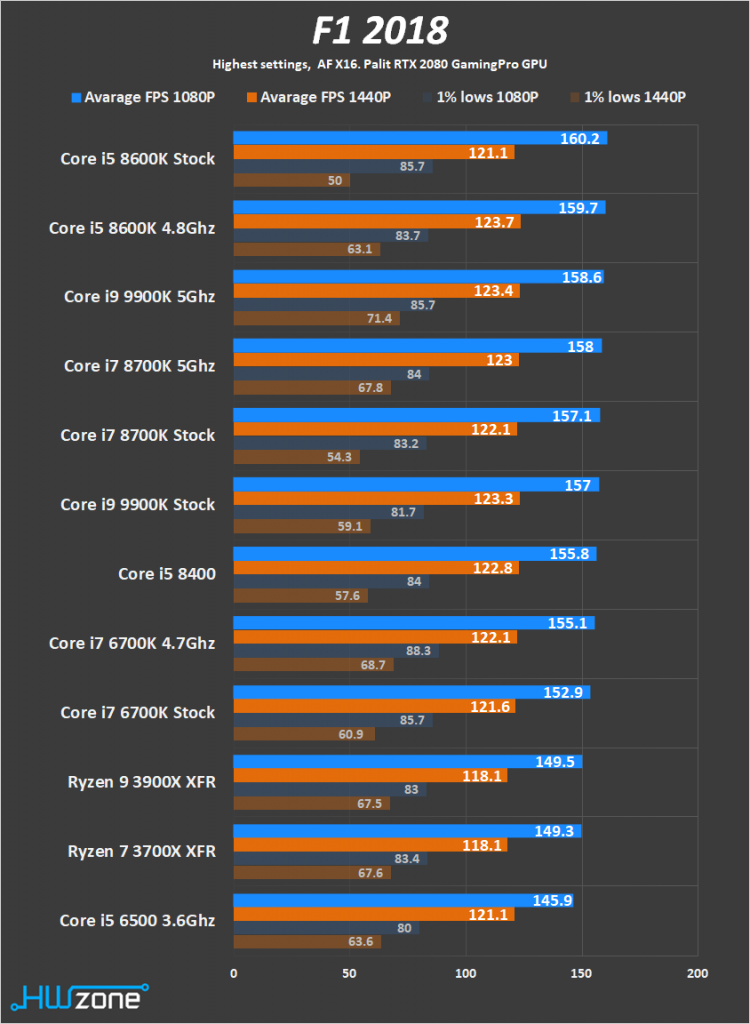 The F1 2018 racing game presents yet another fairly flat graph for Processors, While the Ryzen processors maintain healthy data at minimum frames per second in both resolutions versus even core i9 9900K. 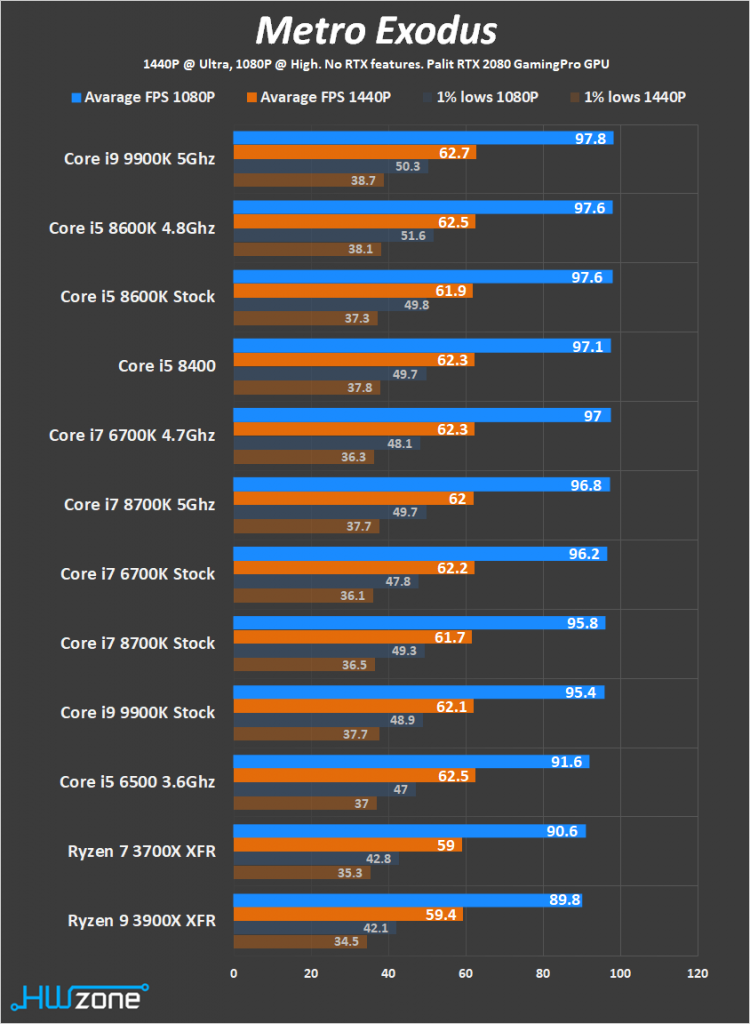 The game Metro Exodus is also included in the list of the heaviest games currently running. At the moment, the new Ryzen processors do not exhibit special capabilities, to say the least. We hope that with game patches we can see some improvement. However, this is not a particularly large performance gap between Ryzen and the processors core.

Of course, 3DMark also has a place in comparison to all your number-hovers. The graphical score (blue) of the new Ryzen processors is consistent with those of processors Intel The fastest. This means that they are capable of delivering maximum performance to the graphics card. The CPU calculation test reminds us of Ryzen 3700X who is boss in front core i7 8700K. 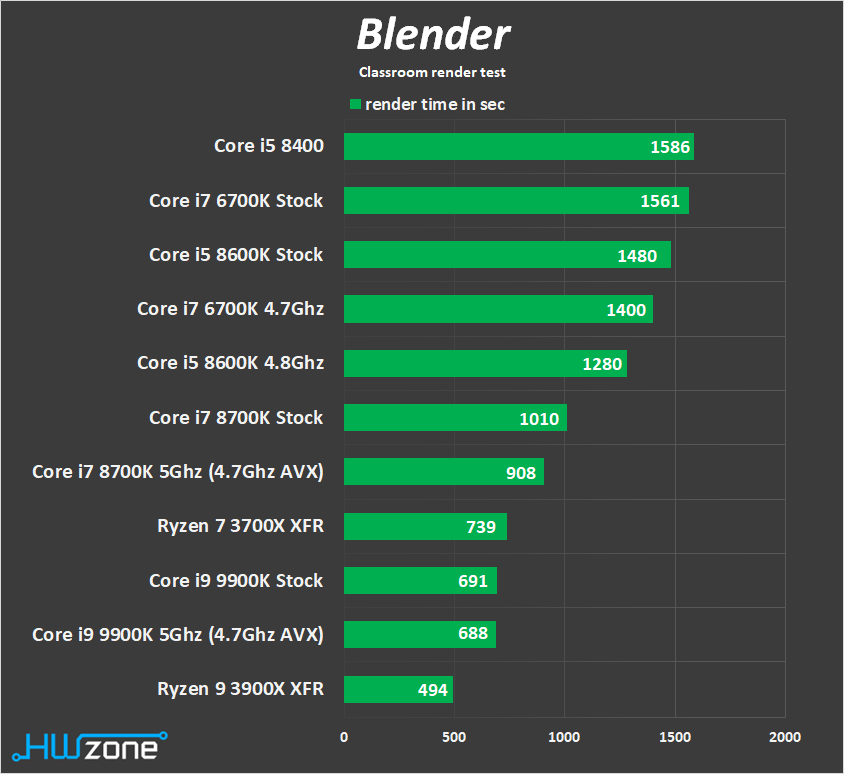 And now for productivity. We took the 3D software in the blender and checked in seconds how long it would take to render a three-dimensional Classroom scene that can be downloaded for free. If there is one test that reflects the differences in processing power between Processors Completely different, that's it. With less than 500 seconds to render the scene, leaving 3900X dust-core i9 9900K by a considerable margin of tens of percent.

The Ryzen 7 3700X came very close tocore i9 9900K itself, which is indicative of many of the power these processors have in the blender, great. core i7 8700K stays far behind. 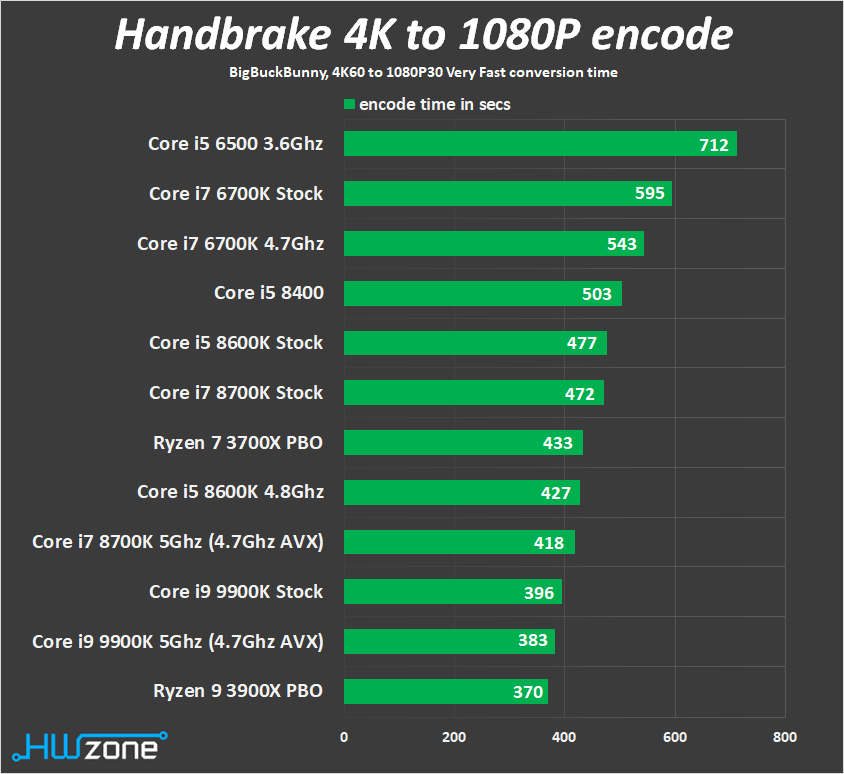 Handbrake video conversion software uses the AVX set of commands that processors have to speed up the conversion process. This software is now oriented towards Intel, and my processors AMD In the past, they stayed a little behind, especially when they relied heavily on single-core performance and only reasonable support for multiple capillaries. True, there seems to be a very good recovery from this situation when Ryzen 9 3900X performs the conversion first, and Ryzen 7 3700X does it a little faster thancore i7 8700K. 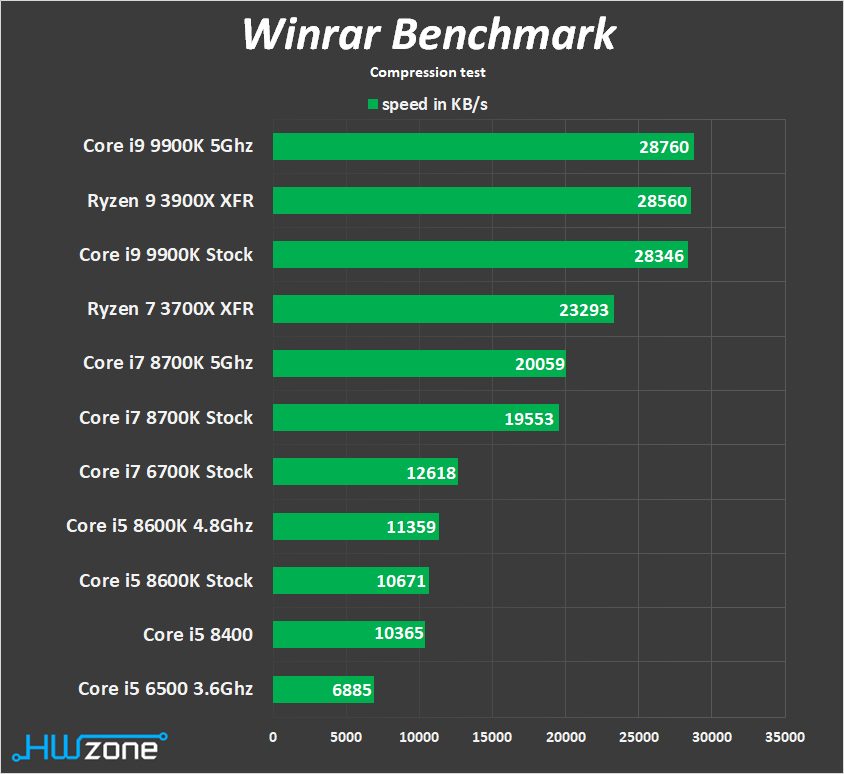 Although this is not a very important test, it is interesting to see in Winrar how quickly the new processors can compress. Here, too, there were usually processors AMD Far behind, but the 3900X manages to equal 9900K when the 3700X skips the cores of the cores Intel forward. 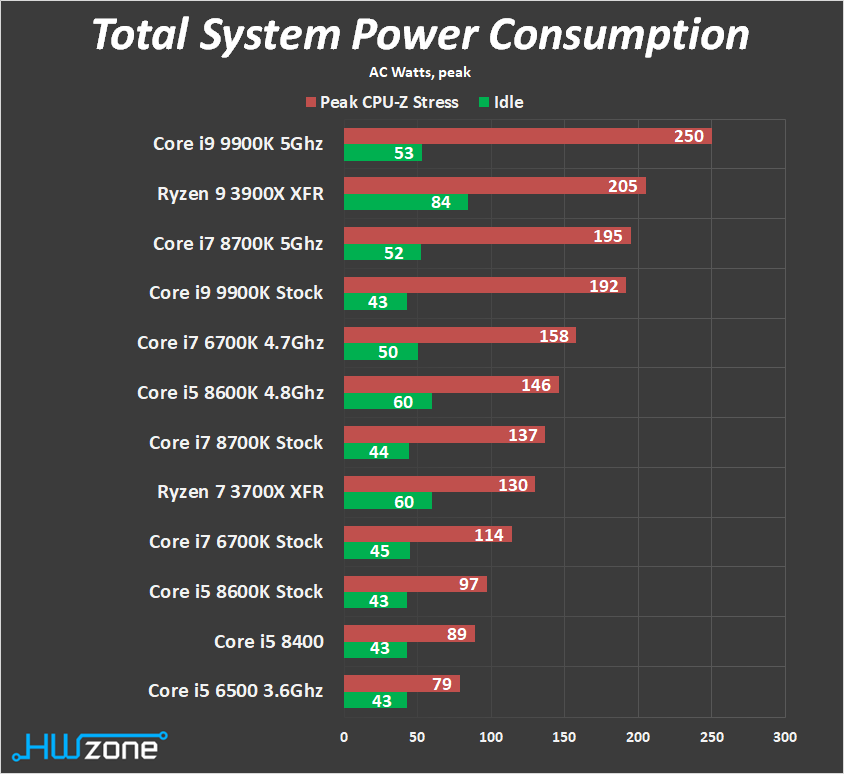 We measured the power consumption of the entire computer system when the processor was in an effort. It is important to emphasize that the numbers should not be overly important when resting, since this depends very much on the motherboard model and other equipment connected to the system. True, the effort of numbers is much more balanced.

These numbers are exactly what I wanted to see. Processors AMD The newcomers are no less than a new standard of efficiency in the world of stationary processors. The Ryzen 7 3700X shows low power consumption and is similar to the Core i7 8700K at default frequencies. When it comes to a productivity processor that can deliver tens of percentage points more performance, I see that there is an indirect effectiveness of the efficiency Intel On desktop computers. We came to this point convincingly.

The landscape of the world of processors changes forever

I think we're seeing a real change in the world of stationary computer processors, one that has not happened in many years. What we see here is a significant change in the amount of power that money can buy.

If we take a graph of processing power and its ratio to price, this launch is a very sharp upward leap, and one that Intel now has to deal with in terms of performance productivity and public relations with the world.

Today 12 cores in standard motherboard housings is a reality, and very soon with the launch of Ryzen 9 3950X Processors Having 16 cores will be something that a home user can purchase at a good price than ever. This is a situation that can not be completely ignored, to launch another processor that has 8 cores and to sign an end-of-the-day work.

Of course, it's important to look at the performance tests and understand that there is no precedent for gamers here. Processors This year, as well as last year, they became superior to gaming more than ever by inflating the resources they can give another six blocks considered top with i7 8700K.

Although there is a message to users that gaming is not the only occupation and demand. People who also want to work on the computer and need every resource possible. Maybe there are your kids who want to run virtual machines and want to dedicate a good amount of resources to the matter. What you get with your family RYZEN 3000 is the DNA of server processors with a burst of respectable operational frequencies and all on a completely standard chassis. 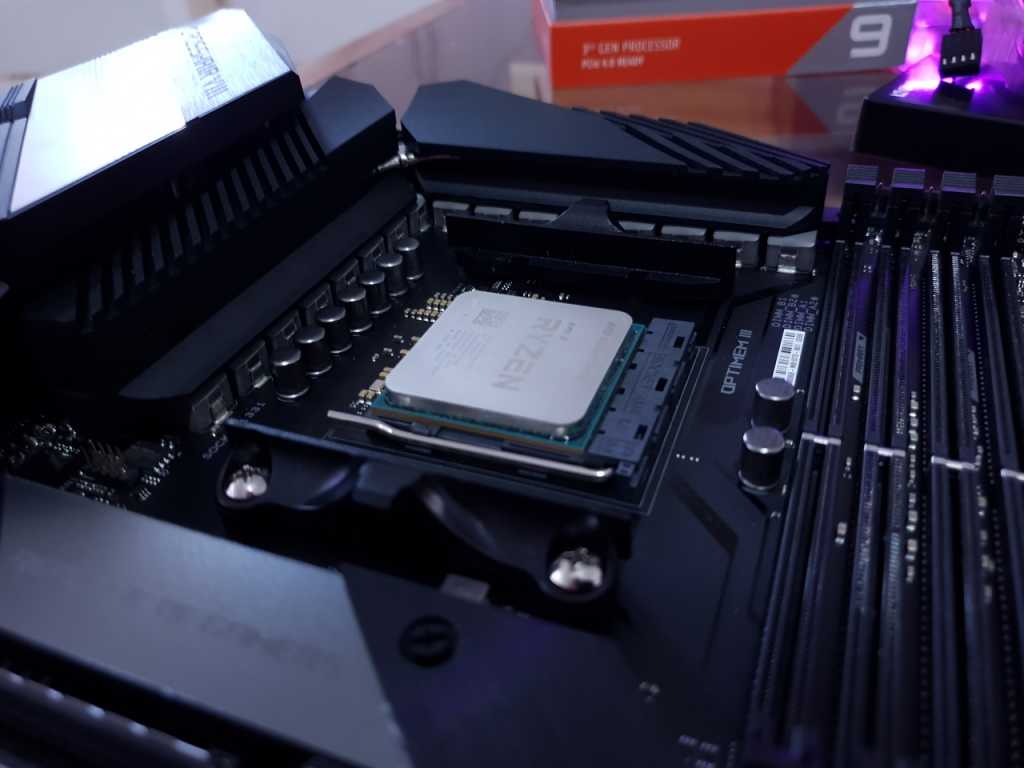 More with the Ryzen 2000 processors are six-core processors, and it seems that with the new series, the price the consumer will receive will only increase if he purchases Processors Such. God-RYZEN 7 3700X Exactly what many who want to stay "only" with 8 processing cores need - an economical, very fast and inexpensive processor that can handle anything thrown at it. In gaming, on average it is not slower than theRYZEN 3900X and sometimes faster than it.

When it comes to integration of productivity with gaming,RYZEN 9 3900X is no less than a monster. At the price of 499 $ is within reach and those who fantasize about running heavy processes on as many cores can rejoice, there is a very accessible and fast solution. Its performance difference where resource utilization is no less than tremendous, and users who need this kind of product can rely on the 3900X to perform the task significantly better than any other product available at a price.

We will be happy to see how games, software and the operating system itself continue to evolve with Processors So serious that they are now almost universally available. While sometimes they demonstrate Performence Jesus, there are programs that do not allow any potential power to break out. This is the time to make the programmatic adjustments and recognize the reality in which people have such a quantity of resources on the PC. Straight, AMD!

We would like to thank you To CRG, The official importer of processors AMD In Israel for logistic assistance in preparing the audit

Stay tuned for upcoming days as we bring more original content about the new Ryzen processor family - such as the impact of memory speeds, platform products, deeper comparisons between models Processors And more!