3-D transistors, HBM and performance: NVIDIA talks about the future

At the 2015 GTC conference, the chip developer unveiled new details about its next-generation architecture - Pascal, Which claims to provide performance improvements of up to 10 times (!) Compared to contemporary architecture

We already know that AMD is preparing a new flagship card with high and advanced technologies, but make no mistake about the fact that NVIDIA is not aware of this - at the annual GTC conference it held in Silicon Valley, the green manufacturer also unveiled Her grandiose plans for her next generation, architecture To be named after the French mathematician Balz Pascal.

XNUMXD memory - HBM and bandwidth we have not seen before

The most significant improvement of the future Pascal generation, at least from the gamers' point of view, will probably be the combination of three-dimensional stacked memories on a platform they share and the graphic core itself - HBM (High Bandwidth Memory) in other words, Similar to what the Radeon R9 390X is expected to offer. Despite the similarities,NVIDIA Directly directed at the second generation of Memories HBM, and talk about interface memory At speeds of over terabytes per second and graphics memories of up to 32 gigabytes.

It is doubtful if we will actually see video cards with 32GB of memory already in the next generation (The Titan X Already proved that 12GB is also a graphical memory That no game today can really really take advantage of), But the very support and capability hints at the huge potential that still awaits us up the road - and if the greatly improved volumes and speeds are not enough, the pile-based XNUMXD memory stack will also allow the creation of more compact printed boards than ever before.

Precisely mixed calculations - doubling performance, but not necessarily for gaming

The calculations performed by video cards most of the time are floating point calculations (operations on numbers that are fractions) with an accuracy of 32 bits - with one bit representing whether the number is positive or negative, another eight bits represent an exponent and the remaining 23 bits the fraction itself. This method is considered to be highly efficient for most parallel computations in which video cards excel, although there are other uses (usually in the fields of simulation and science) that require a higher double-64-bit accuracy - and therefore all AMD andNVIDIA In recent years, these calculations have been supported, with the performance itself being reduced accordingly.

Now, atNVIDIA It is believed that they can significantly improve the performance of your video cards by adding support for floating point calculations with only half of 16-bit accuracy - in a new and more efficient way that will allow double theoretical performance than those of 32-bit calculations. As in the case of 64-bit calculations, here too it seems that the clear use of semi-precision calculations are in specific elements from the world of science and research - but it is not inconceivable that this addition of Pascal generation will spur the development of ways and methods to save it The new Tegra X1 from NVIDIA And the latest Mali cores ARM Include support for such calculations.

One of the biggest promises to the future of the computing world, especially for AMD, is HSA technology (Heterogeneous System Architecture), in which the general processing unit and the graphical processing units will be able to access each other's memory directly. NVIDIA Although there is still no equivalent of HSA, in the Pascal generation it will have NVLink - a unique and fast interface (up to 80 GB per second) for communication between several graphic cards, And even to communications with the processor in specialized systems that should not be based on connections PCI-Express.

NVLINK will allow a large number of graphics processing units to work together more effectively - and will allow, according to NVIDIA, Multi-card arrays with up to 64 units.

At present, NVLink's central usability is similar to all the technologies it has talked about NVIDIA At the conference in the context of Pascal architecture, the focus is mainly on the uses of the world of servers and high-performance computing - but it is very possible that we will see these innovations flow into the home market as well, whether it is larger multi-card arrays, units graphic cards Minimized and designated for assimilation in systems or even technology for creation memory Shared to CPU and GPU. 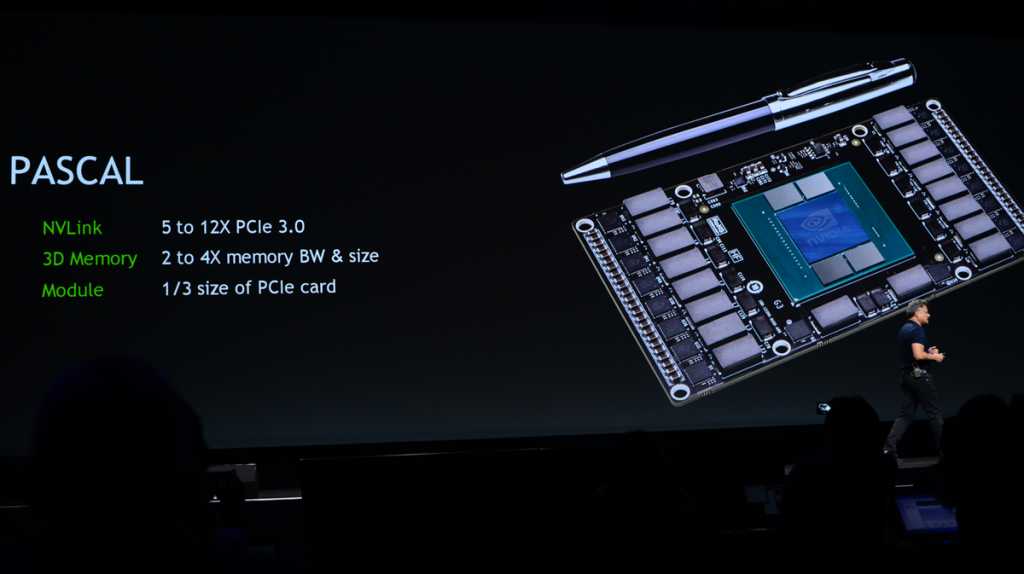 מנכ"ל NVIDIA Introduced on stage a tiny graphics processing unit that can be implemented in large and high-performance systems - and who knows, maybe later we will see similar advanced applications in the gaming world as well

The Pascal architecture Will be based on three-dimensional FinFET transistors in a 16 nanometer lithograph from the old production partner TSMC, Will apparently offer a twofold improvement in performance efficiency (calculations according to the SGEMM index per watt) and should arrive sometime during 2016 - which probably means that in the coming months we will start hearing a variety of reports and prophecies about the specific products on their way to market. Boring sure will not be.