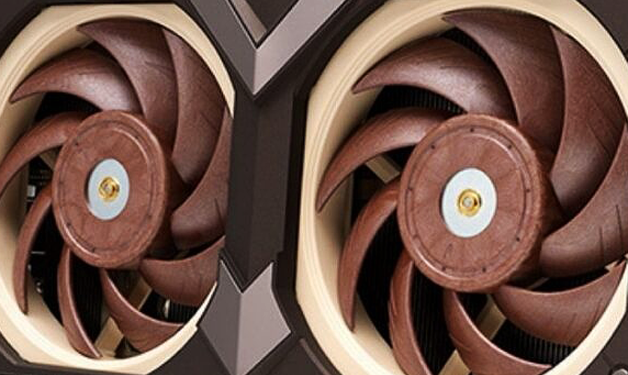 Rumors of the new and interesting company between East and West, between one of the largest hardware and computer manufacturers in the market and one of the most popular and respected names in the field of computer cooling, have accompanied us at high intensity for several months - and now we have an official announcement GeForce RTX The 3070 has an unusual design, which promises to be almost unprecedentedly quiet while maintaining extremely cool and competitive temperatures.

God-ASUS GeForce RTX 3070 Noctua Edition is a first collaboration between these two companies and a first try of Noctua In the world of video cards in general, when beyond the typical brown and beige colors retained on the side of the fans built into the cooling system of the model - its most prominent feature is a huge height that takes up more than four standard slots on the motherboard and chassis, so it probably does not look too Mini-ITX that benefit from the capabilities of this model.

This unique edition will be offered by Asus in a standard version without The fast, With a boost frequency of up to 1,755MHz, and in the OC version with a boost frequency of up to 1,845MHz, also in both cases 104GB of GDDR5,888 memory at 8MT / s will be attached to the GA6 core (with 14,000 CUDA units). The fast Added beyond the familiar base. The cards will enjoy a pair of HDMI 2.1 ports plus three ports DisplayPort 1.4a, and will need 87.5 millimeters available parallel to the groovesPCI-Express Of the motherboard (equivalent to 4.3 slots in the chassis), along with a not inconsiderable length of 310 millimeters.

Use two 120 mm NF-A12x25 fans next to the body Cooling Metallic adapted for them by Noctua, allows Asus and its partner to declare a reduction of up to 15 decibels in the noise level generated from the video card together to the models RTX 3070 others of the company, without compromising at all the typical operating temperatures of the product - both under low rotational speed, both medium rotational speed (which sees the most significant improvement of the array from Noctua) and at maximum rotational speeds where the current model still offers reduced noise level For the standard model that operates at only medium RPM.

The new video cards are expected to hit stores in the middle of this month, at prices yet to be revealed - and we'm already wondering when we'll see this collaboration run for the larger and more powerful cores inGeForce RTX 3080 Ti and inGeForce RTX 3090, and what will be the dimensions and weight of these monsters (if indeed they get to see daylight, of course).