High Ivy Bridge temperatures due to lack of soldering? 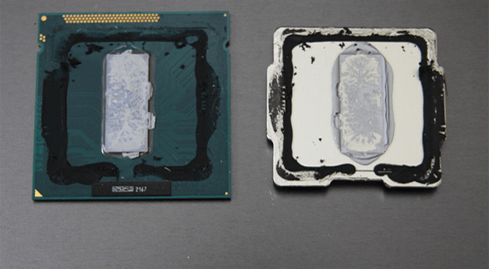 A Japanese site managed to prove, ostensibly, that the choice of Intel Using a simple thermal ointment to connect the internal heat shield instead of the soldering process is the reason for the high temperatures in the Ivy Bridge processors

Many performance enthusiasts around the world were disappointed to discover that The Ivy Bridge processors Which were launched with great solemnity last month, show great aversion to high tensions, which are reflected in high-temperature temperatures in situations where generation-Sandy Bridge Used to work without any problem - a characteristic that to some extent limited the speed potential of new generation processors compared to processorsSandy Bridge Who preceded them.

The people of Intel Stated that the reason for the increased temperatures lies in the new and minimized production process of the chip, which allows many more transistors to be "compressed" together and thus increases the heat emission per unit area.

However, some interested parties who have analyzed the Ivy Bridge processors in depth have not been persuaded by the chip giant's explanationThey thought Because the main reason for the high temperatures is in the process of connecting the internal heat spreader (the piece of metal that protects the chip itself) - instead of using a soldering process that does not involve the use of fluxless solder and allows soldering of the internal heat spreader directly on the chip while minimizing Unwanted oxidation processes, Intel has chosen to use a standard thermal ointment to create thermal conduction between the chip and the heat spreader, which inevitably impairs the heat transfer efficiency away from the chip components.

The network began to complain that Intel chose to save a few pennies in the process of preparing processors at the expense of enthusiasts of haste, although initial attempts to prove the thesis spoken by replacing the thermal veneer between the chip and the heat dissector did not produce significant results.

Now it seems that a Japanese site called PC Watch Succeeded in the task Replacement of the basic thermal ointment between the chip and the heat spreader in a sample processor Core i7-3770K in branded thermal ointments shaved about 20 percent of processor temperature at standard and rushed frequency, and even allowed results The fast Better than 4.9GHz and 5GHz without creating a situation where the frequencies are automatically reduced to prevent physical injury to the processor due to throttling.
These findings seem to prove that a major cause of increased temperatures for the C-Ivy Bridge Is the method by which the chip is connected to the internal heat spreader - when using the same solder without welds could lower the temperatures even further.

There is no doubt that further tests and testimonies will be required before we can draw unequivocal conclusions, but it will also be interesting to see what the response will be (if any) Intel Things.