The year is coming to an end - and so is it The summary Our triangle, with the leading and most innovative products in the opinion of the news reporter and editor in chief, Alex Shapiro. 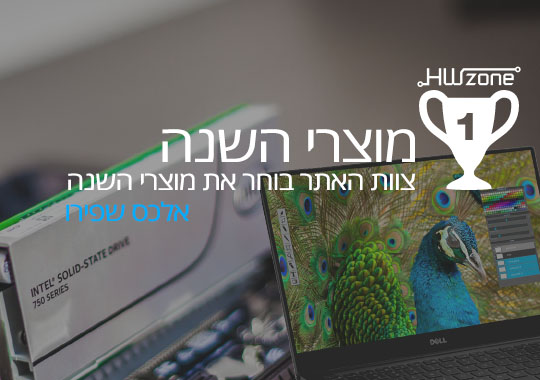 AMD's CPU cores are not cost-effective, but revolutionary

Somewhere in the middle of the year 2015, when it is in the midst of a succession of losses and significant technological inferiority in the face NVIDIA, Probably not too many people believed that-AMD There is a chance of making a comeback in the world of graphic cores. Nevertheless, the veteran Sunyville developer decided to collect all the resources and capabilities they had left, and to go the full length with tickets in modern and improved architecture, and with memory Innovative and revolutionary approach that opens a window to a new and intriguing era.

The cores are spoken The cores of the Fiji course, Which formed the basis for the Radeon Fury X, the standard Radeon Fury and the Radeon R9 Nano. These models were certainly not flawless, with very high price tags that in most cases and uses still had difficulty dealing with competing tickets from home NVIDIA, A very modest homing potential and a minimal range of unique and customized models from the various manufacturers. And yet - in the coming year, with especially high-speed HBM2 memories being a standard component in every video card for the mid-high market, remember that this was mainly due to this AMD.

The Fiji family of AMD Help make Memories (Which enable the creation of miniature printed circuits for powerful graphics cores) and also water coolers in a closed system to a new standard in the market, and this is a significant achievement that is certainly remarkable and praiseworthy.

SSD 750 Series: When Intel Launches a Drive, You should pay attention to it

Despite being an additional product that is really not intended for all low-budget people, Intel SSD Series 750 Drives Managed to impress me more than any other storage drive that came to market in 2015. After several years in which the various vendors in the market were able to exhaust all the capabilities and performance that the SATA 3.0 had to offer, it was time to move on to the NVME standard for flash chips and to fix the PCI-Express on the connection of the drive to all other system components - and the first to do so fully Was the chip giant in question,SSD Consumers are almost a hobby.

The 750 drives that came in card configuration PCI-Express Expandable and as a chunky 2.5-inch drive in a U.2 connection, they provided us with unprecedented performance at almost 3 terabytes per second during continuous read and write, and up to 900 megabytes per second for random operations, well illustrating the tremendous potential that exists when disconnecting AHCI and -SATA obsolete.

A few months later Intel We have also seen Samsung launch its Pro 951 / 950 series, which offers features and capabilities similar to those introduced by the family of Intel - and in 2016 we definitely expect to explode in the field, with more and more products that will be based on PCI Express connections both as an M.2 and as a standard expansion slot on the motherboard, Memories And supporting PLCs NVMe As a standard that enables us to express the full performance of the flash era.

It will probably take a considerable amount of time for SSDs to become a winking product for the average home consumer for whom price is the most important parameter - but thanks to Intel We know that the possibility exists, and that is where we have to aim.

The laptop market has become quite drowsy lately, with AMD becoming weaker in both its processors and its graphics cards,NVIDIA  To a kind of re-selection for most models and manufacturers, with the feeling that the difference between product and product is rapidly decreasing. It is good to discover that even in this situation, there are still certain manufacturers and products that stand out above all the herd - in this case we are talking about the latest XPS 13 and XPS 15 models Dell.

Dell's computers do not include any unprecedented technical specifications, but include high-quality construction, keyboard and touch surfaces of the highest quality viewed on a Windows-based computer, InfinityEdge technology With a very thin envelope that allows them to be significantly more compact than all the competitors that come with the same physical screen size.

No unnecessary gimmicks (at least some consumers think), such as a pivot that rounds 360 degrees, a detachable keyboard, an almost impermeable body or touch screens by default (you can choose a touch screen model if you want, by the way) XPS is a choice with very few compromises for anyone who wants to go against the current, and focus on efficiency, usability and performance.

The XPS has never tried to be the cost-benefit champions in the category, and it continues to be true in the new incarnation - but in the opinion of many, and in our opinion, they are worth the investment for anyone interested in an exciting and really interesting PC PC now more than ever before. We hope that other manufacturers will find the same 'magic recipe' that Dell has found so that the PC world will no longer be needed For marketing campaigns Strange like this In order to prove that it is still relevant.

Yearly summaries from our other reporters:
XWUMX HWzone's Year Products: The screen that gives everything
HWzone's year-end products for 2015: the card that nearly killed AMD