HWzone's year-end products for 2015: the card that nearly killed AMD

These are the last moments of 2015, which was full of changes and upgrades of all kinds in the world of technology, and this is probably the most appropriate time to recruit HWzone reporters and find out what products they personally think have helped make the computer world more advanced, lucrative and exciting in recent months. So without further ado, here are the top three products of the past year, according to Lior Matityahu, Wrote our guides and hardware reviews. 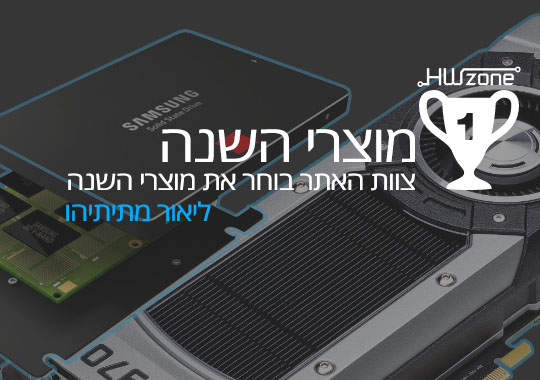 At the end of 2014 competition in the market for video cards has warmed. B-AMD Decided that they were fed up with the core of the flagship,Radeon HD 7970 and want to extract graphic cards Warmer and stronger. They re-categorized an entire series just to create an excuse to bring everyone the R9 290 and R9 290X.

The competition of Anodia Was not similar at the time, she decided that she was not going to continue producing home ovens to get the same power. While they were fighting with the series GeForce Their 700 has been engineered for an enhanced and significantly improved core core for graphics and has been ready.

The first light bomb that came to give a hint of the next monstrous technology came as a baby sent forward, the GTX 750 Ti that came out before everyone else. Some AMD engineers may have been shaking. After a few months, the end of 2014 was launched The GTX 970 graphics card Next to his older brother,GTX 980. These are monsters with a large graphic power, although not one we have not seen before. What made them into the madness of the audience? Extremely low power consumption and super competitive prices.

The GTX 970 was launched at the end of 2014 in 330 dollars and today, a year later, its price does not move in dollars. Why? Here are some good reasons. The first and most important is that the GTX 970 has become a best seller on a scale never seen before. When it comes to a video card that comes close to 2000 shekels, the GTX 970 is the first video card of its kind in the world that captures even the most popular video card list according to Steam Users Survey. Again, there has never been a case where a piece of hardware at such a price tag has even come close.

The GTX 970 managed almost exclusively to slaughter the R9 290 series of graphics cards AMD. Featuring similar performance, powerful software add-ons, almost 100 less power consumption in effort, resting and competitive fans, and competitive AMD Plunged into a quarter after a quarter of revenue failures. People went home, and to this day the company has relative difficulties.

Remember, a few months after its launch, A scandal was exposed It actually has half a gigabyte out of the 4 of the GTX 970 actually running at very low speeds. Still, even with the demanding 2560 × 1440 resolution the GTX 970 continues to successfully pass the tests and remain one of the best-selling video cards in the world. One piece of hardware has become the biggest enemy of an entire company. For its excellent quality, high performance and presentation of the fact that an end product does not have to be a monster that consumes huge amounts of power, the GTX 970 is for me the product of the year in the graphics card category.

Today it is no longer a secret, drives SSD They are simply a necessary component in any computer system that wants to call itself fast. At the end of the previous decade, small drives began to capture our hearts with higher prices and higher performance. We knew it was going to become an integral part of our computing experience.

A few years later, the Korean giant also woke up and decided that it was entering the market.SSD. What happened in response? It has easily become the largest market share manufacturer. Well, this is a fairly familiar process for Samsung. She is not a competitor, but simply an occupier.

First it was the Samsung 830. SSD drive at a fair price that performed well. Were better than Samsung, so Samsung continued to develop technologies to become a major player. It was not long before Samsung brought the hit with the 840 series. This time it came in three flavors, the usual (Only 840), Pro and EVO. The first and second were created to accommodate two different markets and the third was created more or less for everyone.

Since then, Samsung has abandoned the idea of ​​creating a simple drive and advanced drive and has moved to the idea of ​​advanced drive and advanced drive, which were and still are known About 850 EVO And 850 PRO. These are performance monsters at an affordable price that carry 5 years of warranty and have become a big hit in Israel and around the world. Each possible 850 EVO you can, one for the woman and also one for the parents' computer. Everyone suddenly has a computer with loads that hardly exist. No wonder today Samsung controls a third of the marketSSD World. Series SSD 850 in general and the EVO drive for me gets the product of the year in the home storage. It leaves little room for deliberations about a powerful product with extended warranty at an accessible price.

Today everyone knows the Austrian manufacturer Noctua. This is a company with a completely different approach to the world of desktop cooling than that of manufacturers like Scythe or ARCTIC. Company Noctua Aims to produce the highest level of engineering and performance, even if it means that it will release advanced refinements at a rate when Lamborghini releases a new car. This means that she will not have an answer to every market segment, but mainly to those who are most interested.

Five years ago we brought you the coverage of NH-D14, Cooling Which was the new flagship of the young company. This is a cooling that looks a little strange but massive in size. The D14 has been able to sweep dozens and even hundreds of excellent prizes around the world and has become a hit among the fans of cooling and quiet capabilities. The D14 redefined what can be done with a body Cooling, The minimum quiet sacrifice for first-class performance with water cooling kits that cost twice as much.

For years since the market wondered, how the hell are automakers supposed to defeat something close to the end of engineers' ability to use these materials, surely when they have a large product line to maintain? How is Noctua itself supposed to do this? Well, after four more years of planning has designed the Noctua The engineering masterpiece known as NH-D15.

She did it. Noctua has been able to produce even smaller volumes of cooling, which uses quieter and larger fans of 15 inches compared to 14, with the added side of enhancing high memory support. When I thought that the end of the ratio of quiet to performance was achieved, the D14 continues to break the record of its predecessor. The NH-D15 Completes the gap that D14 has managed to open up against the more advanced water coolers launched in the meantime and less than NISNUMX shekels. It defeats water cooling kits that cost NISNUMX and more, and also show a very low performance noise ratio.

For this, NH-D15 has been selected for the product of the year in the field of cooling Noctua In general that proves that taking the time with product engineering is a smart thing that brings fruit.