After Lior's election, It's time to see what are the products most impressed in the past year by our newsletter, guides and reviews, Uri Carmi. 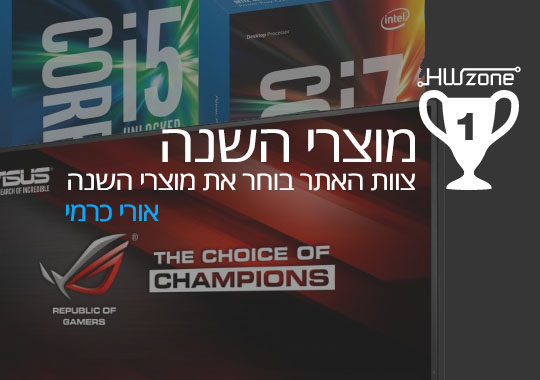 ASUS PG279Q - the gaming screen that gives everything

Gradually, LCD screens appeared on the market that bring back what we lost with the transition to them: a higher refresh rate. They offered up to about 120Hz of refresh rate and players who had a strong enough graphics card could certainly feel a significant difference compared to a standard refresh rate of 60. However, this boundary breach forced the use of fairly inexpensive panels that forced users to choose: or faster to the eye, Or more beautiful to the eye.

Over the past few years, the image has remained relatively similar, with small breakthroughs such as an increase in 144Hz refresh rate, higher quality TN panels, and so on. But the idea of ​​a truly high quality panel with a higher refresh rate than 60 still looks like a wet dream. Until this year, nothing happened.

The ASUS PG279Q Is a new gaming screen that breaks all possible boundaries at once and in a completely brutal way, leaving no other area empty (except the wallet): with a wide resolution of 2560 × 1440 on a 27 "size, it not only offers a quality IPS panel with a refresh rate Of only 4ms, but also an inconceivable refresh rate of 166Hz along with support for G-Sync technology of NVIDIA Which even gives an even smoother gaming experience.

With such impressive data, and despite its relatively high price (about $ 799), it has captured the world's heaviest users and gaming sites in recent months and has won numerous awards and accolades. For this impressive breakthrough, I choose the Rog Swift PG279Q screen ASUS As the best screen of 2015.

Windows 10 - The system that returned users to the center

5 The last few years have been fateful for Microsoft, which tried to introduce a more innovative operating system into the market and into the hearts of consumers, Windows 8, and in fact gave the opposite effect: massive flight of both private and business users, which hurt its name and especially its sales.

Even when it released the improved version, 8.1, it did not exactly help and users still chose to move away from fire from a system that is too changed in its interface from any system Windows Previous, what put the Windows 8 is the worst-selling operating system of all time.

Since then many waters have passed through the river, and several people have been replaced at the top of the pyramid. Thus, after an unprecedented slump brought by Windows 8, Microsoft announced a new system, which it released to the market this year: Windows 10 System. One that not only listens to the users' feelings and returns what is important to them (the Start Menu), but continues to improve and innovate.

Whether it's because of Microsoft's marketing move to allow it to be upgraded for free for a year or whether it's because of the return to the sources, the pleasing interface and the additional innovations, Windows 10 restored trust to users and recorded record highs. Today, after only a few months, it can already be seen almost every second user, fast and perfectly stable.

So right, Windows 10 is still a bit lacking, as in the interface design capabilities of 7 and slightly controversial settings for some users, but the company's efforts are noticeable and can be seen constantly upgrading, and we even won last November its first major update, with many more like it guaranteed later. For listening to users, for proper planning and especially for a smart marketing method, I choose the system Windows 10, and hopes to impress her even more in 2016.

Since the first Core i7 processor has been released Intel A lot has changed. The processors have shrunk from within, and from generation to generation we have received a certain percentage of performance improvement, enhanced graphics core and cooler hearts that go even further when talking about Overclock.

but I think The sixth generation of Core i processors Brings with it, perhaps, the best round in the series. And when I say in the series, I'm not necessarily talking about just one category. In desktops, the 6700K is definitely an impressive processor to start with. It comes with a very nice improvement in processing percentages and takes with it in a large number of applications the performance of the previous extreme generation and offers capabilities Overclock Which according to the report around the network moves up to the 4.9 Ghz frequency on air, all this in a thermal envelope of only 90W and fairly low temperatures.

Another derivative of it, one even more impressive, is what it brings to the mobile market,Core M that offer a thermal envelope of only 4.5 watts along with a performance that does not embarrass the firm. At the top of the list, it even brings to this market a quad-core processor Mobile Has an open product that can reach up to 4.4 GHz in Overclock and compare performance to desktop 6700K with a thermal envelope of 45 watts and convenient temperatures per Mobile Who knows how to cool himself. I'm speaking of course about 6820HK.

But the top of the top is the platform it comes with, the Z100 series that not only brings with it built-in support for technologies we loved before, but also gives free rein to technologies that are a milestone such as USB Type-C and full-width M.2 connection. For all of this, I'm more than proud to choose SkyLike as the best development of 2015.