Prophecies that accompanied us in sequence from the day the Apple M1 chip was first introduced a little less than a year ago promised a more powerful edition for more advanced Macs, usually under the name M1X, but this time Apple seems to have successfully kept its best cards close to the chest - because now We have two more powerful M1 chips for a new generation of MacBook Pro mobiles, with processing power that should defeat anything Intel andAMD Offer us as part of the architecturex86.

The Apple M1 Pro chip, with a physical size of 245 square millimeters in which up to 33.7 billion transistors are compressed based on TSMC's 5 nanometer manufacturing process, benefits from the services of eight or ten physical processing cores, out of six or eight powerful Firestorm cores and another pair Cost-effective Icestorm cores (yes, Apple technically outperforms Intel and brings the hybrid processing concept to the PC world) based on architecture ARM v8.5, with a generous amount of L2-level shared cache and 32MB SLC memory layer that is a replacement for L3-level cache sold from competing architectures, 128-bit dual-controller for Memories L At a base speed of 6,400MT / s, accelerates computational learning and artificial intelligence with a maximum performance of up to 11TOPS (or 11 trillion computational operations per second) and most importantly - a built-in graphics processing system significantly increased up to 16 cores, 256 processing clusters and 2,048 units ALU has a frequency of 1,278MHz which gives theoretical performance of over 5 TFLOPS when it is at its peak.

This whole array of numbers looked very impressive when presented in a concentrated manner on stage for the first time, but then came the really big news of the launch event - with the revelation of the existence of chip The Apple M1 Max that does take things to the extreme chip With a physical size of 432 square millimeters and 57 billion transistors (!!!) in total, including eight Firestorm cores and another pair of Icestorm cores, double the amount of memory SLC cache, controller L Square channels at a basic speed of 6,400MT / s (for a crazy total information traffic volume of more than 400 GB per second) and a built-in graphics array with up to 32 cores and 4,096 ALU units capable of up to 10.44TFLOPS performance and make users completely forget From the need for separate graphics cards.

Apple claims tens of percent higher efficiency compared to the common modern laptop processors of the pair of players we know from the field, without compromising on the maximum capabilities that should also surpass those of the x86 competitors - but it seems that the biggest achievement is in the graphics processing sector, where chip A leading M1 Max will be able to deliver theoretical performance similar to that of a portable GeForce RTX 3060 card with maximum performance shell (or alternatively an RTX 3070 chip with a modest performance shell), all within the same silicon chip as the cores.ARM For general processing, the accelerator for computational learning and memory controllers. A masterpiece of semiconductor design by the "young" actress who technically made her first steps in this world less than a decade and a half ago. 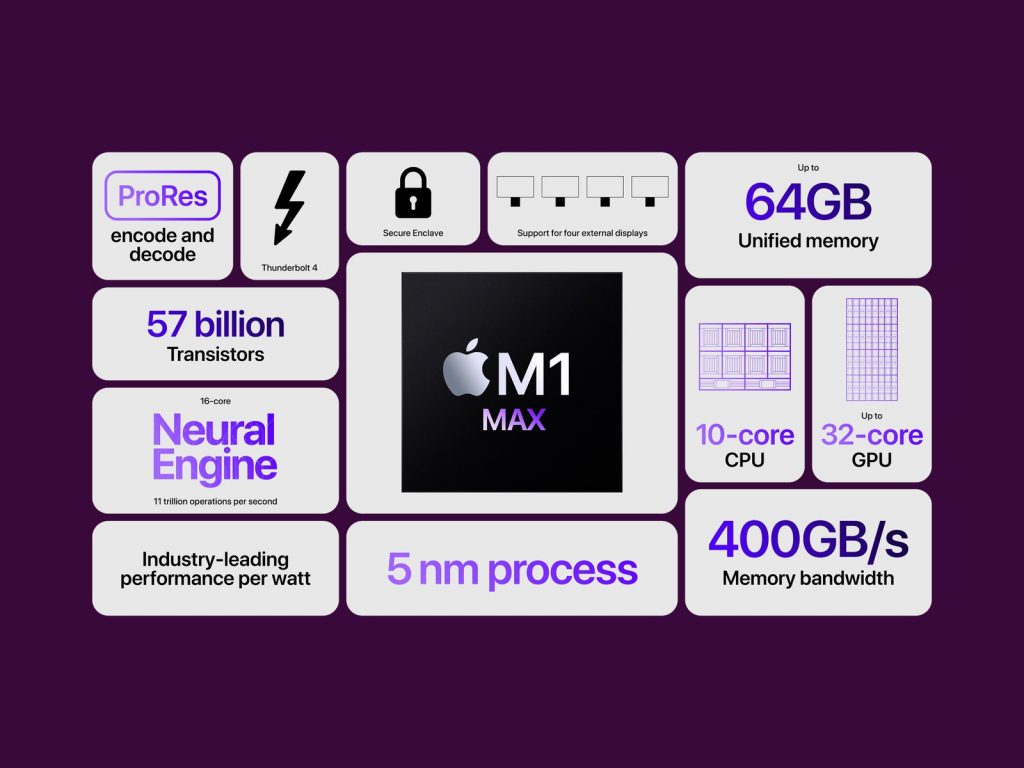 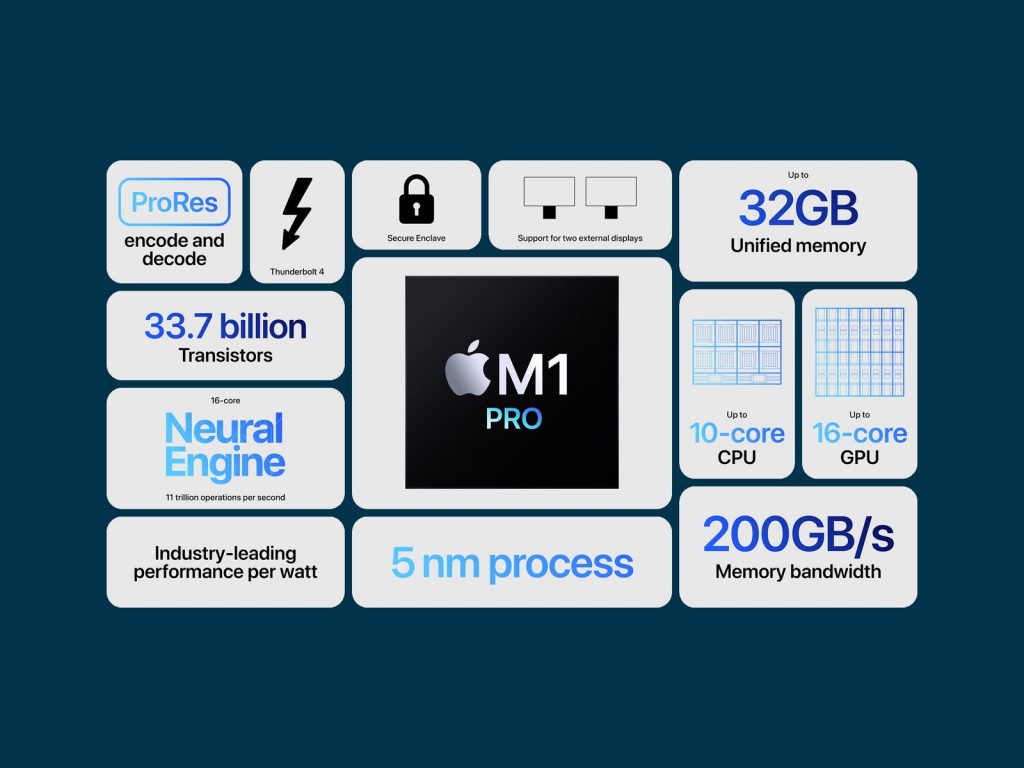 There were also new laptops from the MacBook Pro series at the event, though it seems that even in the eyes of Apple itself they were a second fiddle for the chips that would run inside them, despite a fair number of upgrades that would bring to the table. The successful 2021 models in the successful series will provide users with 16.2-inch and 14.2-inch MiniLED screens with a high display density of 254PPI, a refresh rate of up to 120 Hz and a very impressive average brightness of 1,000 nits, between 16GB and 64GB of LPDDR5 memory, storage SSD Of between 512GB and 8TB, three connections Thunderbolt 4 that also include USB 4 support as part of their capabilities set, 6-channel dual-channel Wi-Fi connectivity with a maximum integrated speed of up to 1.2Gbps, an impressive audio array consisting of six speakers and life battery Of up to 21 hours on display Video (In the larger of the two models) - when users will have the ability to choose between several sub-configurations of the M1 Pro and M1 Max in both the 14-inch version and the 16-inch version.

Apple will offer its new computers for sale starting next month, in a familiar silver or gray hue - with starting prices of $ 2,000 for the 14-inch version and $ 2,500 for the 16-inch version, not including tax, which can reach up to $ 5,900 and $ 6,100 respectively if all possible hardware enhancements for processing and memories are selected. 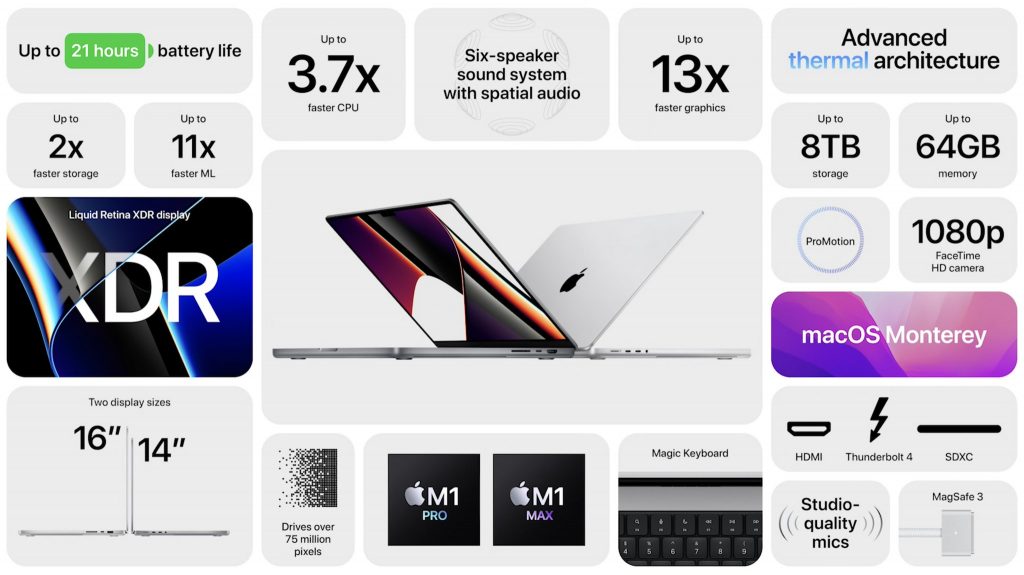