In the shadow of the Core M: Intel launches desktop Airmont chips at 14 nm

Quietly and modestly, Chipzilla is launching a new generation of Pentium and Celeron desktops with sealed cores, named Braswell, which will try to find a right to exist alongside the models.Core M systems that have a similar thermal envelope

A few days after Which we got to know about the first official product Based on A sealed chip from the Cherry Trail section, The first to be established Manufacturing process of 14 nm, Intel decides it's time Also get to know the corresponding product generation - Braswell, Chips under the Pentium and Celeron brands for desktops and laptops at 14 nm, which will replace the Bay Trail-M chips.

The Braswell generation Will contain, for now, four different models - the first three belong to the Celeron brand, with two including a pair of Airmont cores (minimized to 14 nanometers of The Silvermont cores are well known to us) And the third includes four such cores, and all three inhabit Core Built-in interface that is simply called Intel HD Graphics and contains 12 units performing at a frequency of between 320MHz and 600MHz. 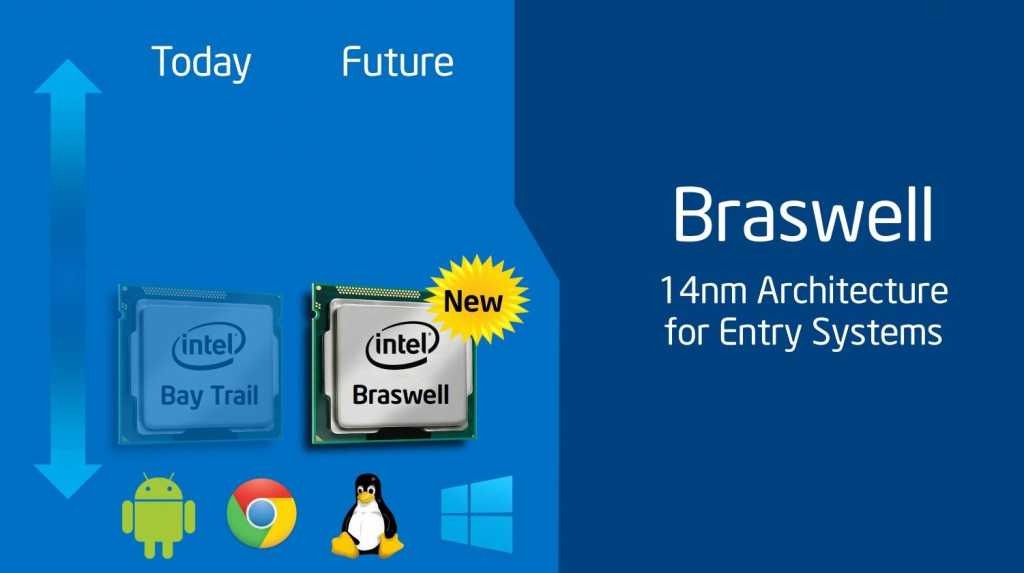 All three of the above models will be priced for the various computer makers at a cost of $ 107, similar to the latest cellar chips from the Bay Trail generation - with the most significant improvement in the current generation coming once again from the graphics core, which now jumps to 12 execution units from 4 units Performed only in the previous generation while maintaining similar basic operating frequencies and low turbo frequencies only at about 100MHz. Another important upgrade is the RAM, which will now support speeds of up to 1,600MHz and dual volumes of up to 8GB, which will allow us to get slightly more modern devices Based on Processors These.

Quite surprisingly, the category where we do not see any real improvement, and may even see some decline in capabilities, is the processing cores themselves - which now offer slightly lower frequencies than we saw in the previous generation (or much lower in the case of the economical Celeron N3000, Basic work of only 1.08GHz) despite the leap in production technology, apparently in order to allow the leap to the graphics core. Nonetheless, the bottom line is that Braswell chips should provide a complete and enhanced user experience, thanks to a graphics core that is supposed to better handle all the basic features of Windows (Food Operating System Otherwise you will find) and memory RAM Fast volume increase.

The fourth and last model in the Braswell family belongs to the old Pentium brand, and takes the capabilities a significant step forward with four quad-core Airmont 1.6GHz base frequencies and a maximum 2.4GHz turbo frequency, built-in graphics core with 16 4 (Pentium XNUMX) The Age of the Bay Trail) At a frequency of between 400MHz and 700MHz, support up to 8GB of memory DDR3L and no less important - a thermal shell of only 6 watts (or 4 watts for specific defined uses, for the manufacturers' choice), compared to 7.5 watts in the Pentium Bay Trail processors.

Braswell chips can be not a bad option at all for compact desktops and ultra-cheap laptops, but they are coming to a market where conditions are a little different from last year - they inevitably stand by The Core M chip family, Which not only offers better performance and more advanced capabilities, but also a significantly lower thermal envelope that stands at 4.5 watts and can even reach 3.5 watts if the implementing manufacturers want it.

True, the differences in price tags are huge at present (the most basic Core M chip costs $ 281, compared with 107 and 161 for Celeron and Pentium chips), but it is quite possible that along the way with The demand for Core processors is expanding in a tiny thermal envelope And the maturation of production technologies - we can find Core M processors In almost every device, from laptops to smartphones, and more importantly, at almost all price levels. Until that far-reaching future comes, if it does - the Braswell chips and the Cherry Trail chips seem to have the right tools to continue the (relatively) momentum that the Bay Trail processors started for Intel In the ultra-economical computing world.