We must admit that this is not how we described our first official encounter with a video card that develops Intel, As part of the strategic and significant decision to expand the technological offer to the field of graphics processing - but the DG1 is already here, and it manages to intrigue us even without unprecedented lines in the segment of its processing capabilities.

The natural assessment, based on the traditional modes of action from the competition, was that Intel Get your start in the graphics processing industry with a flagship model with maximum performance and high price - but the DG1 is actually a product for the mid-range market or even less, with early evidence of 96 processing clusters based on the Xe architecture inside and an official statement from Intel Itself for doubling its performance over the Gen.11 cores that we now recognize as part of the processorsIce Lake Of the company (under similar power consumption).

The same hardware - both inside compact laptops and inside a shell ready to be integrated on a motherboard in a desktop case. However, it is not surprising to find that in practice the stationary version consumes significantly greater power and is capable of reaching significantly higher operating frequencies and performance, similar to the known and obvious differences between desktop video cards of NVIDIA To your alternative Max-Q versions for laptops

The DG1 model was introduced at Intel's press conference Operating in a thin, lightweight mobile (running the Destiny 2 game at a display rate that is not necessarily worthy of any gaming enthusiast), but after the event itself we discovered that it also has a stationary desktop configuration that looks just like modern AMD video cards, NVIDIA And their partners - a body Cooling Compact with single fan over it in a relatively simple silver casing, metal heat dissipation plate at the back, three ports DisplayPort Full size with port HDMI Another is a bluish light coming from LEDs that are mounted on the printed circuit board and interface PCI-Express Full physical size.

Intel is preparing three different architecture configurations for Xe, Of course, when the Ponte Vecchio units presented a few months ago form the upper end (Xe-HPC) - while DG1 is probably the debut of the lower end, under the code name Xe-LP

The card in question does not include external connections to the power supply - which indicates a maximum power consumption of no more than 75 watts that will come entirely from the product interface to the motherboard (we do not yet know if Intel Adopted the standardPCI-Express 4.0 latest, or meet the standard PCI-Express 3.0 and veteran in the first phase). 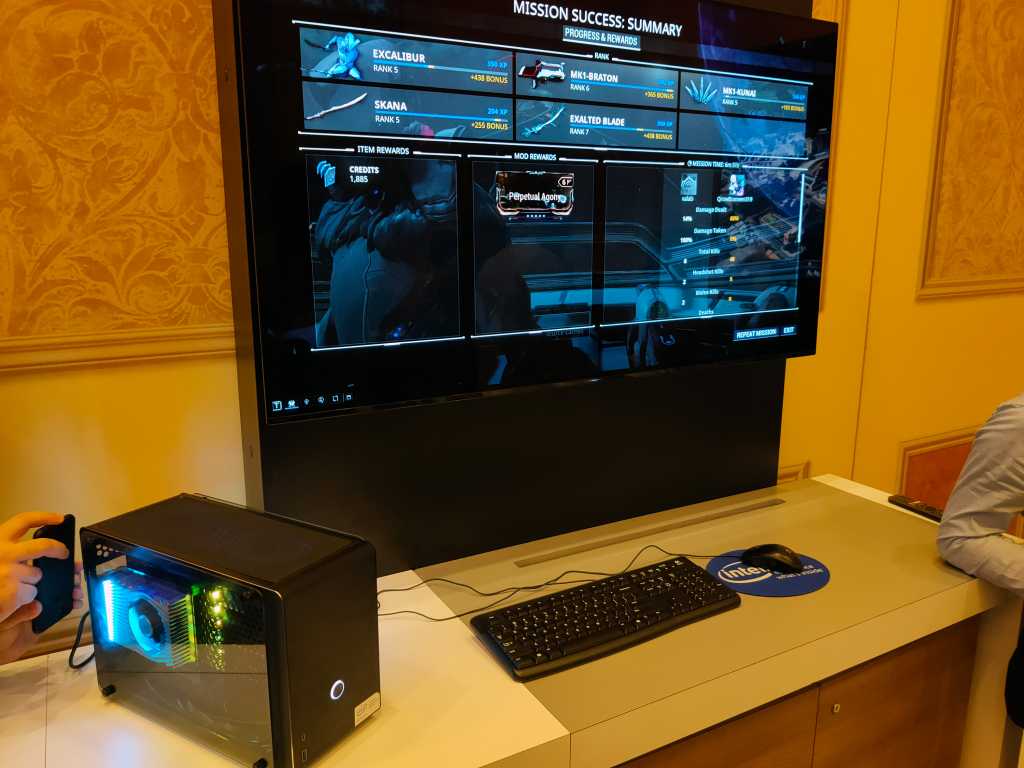 Development kits with DG1 and Coffee Lake processors have been sent to select application developers around the world - to advance the software compatibility with the new hardware ahead of time, in what is expected to be one of the biggest challenges for Intel As part of this new commercial venture

It is impossible to know whether the DG1 is indeed a product that will eventually reach the stores (direct competition for the GeForce GTX 1650? It could contribute greatly to the price reduction requested) or whether the section of the platform Development Only internal and temporary - but it is definitely encouraging to find out how close we actually are to the day when home consumers will have the opportunity to decide between more than two manufacturers in this prestigious and important material field, for the first time since the first days of the 21st century.