The CES 2021 digital conference marks a busy period with announcements, launches and particularly interesting technological displays. Of course manufacturers and technology products like Intel Form a major part with product announcements. Apart from the announcement of new present processors and such and other future processors, we are also getting a launch for a new generation of computers WALNUT (R.T. Next Unit of Computing). 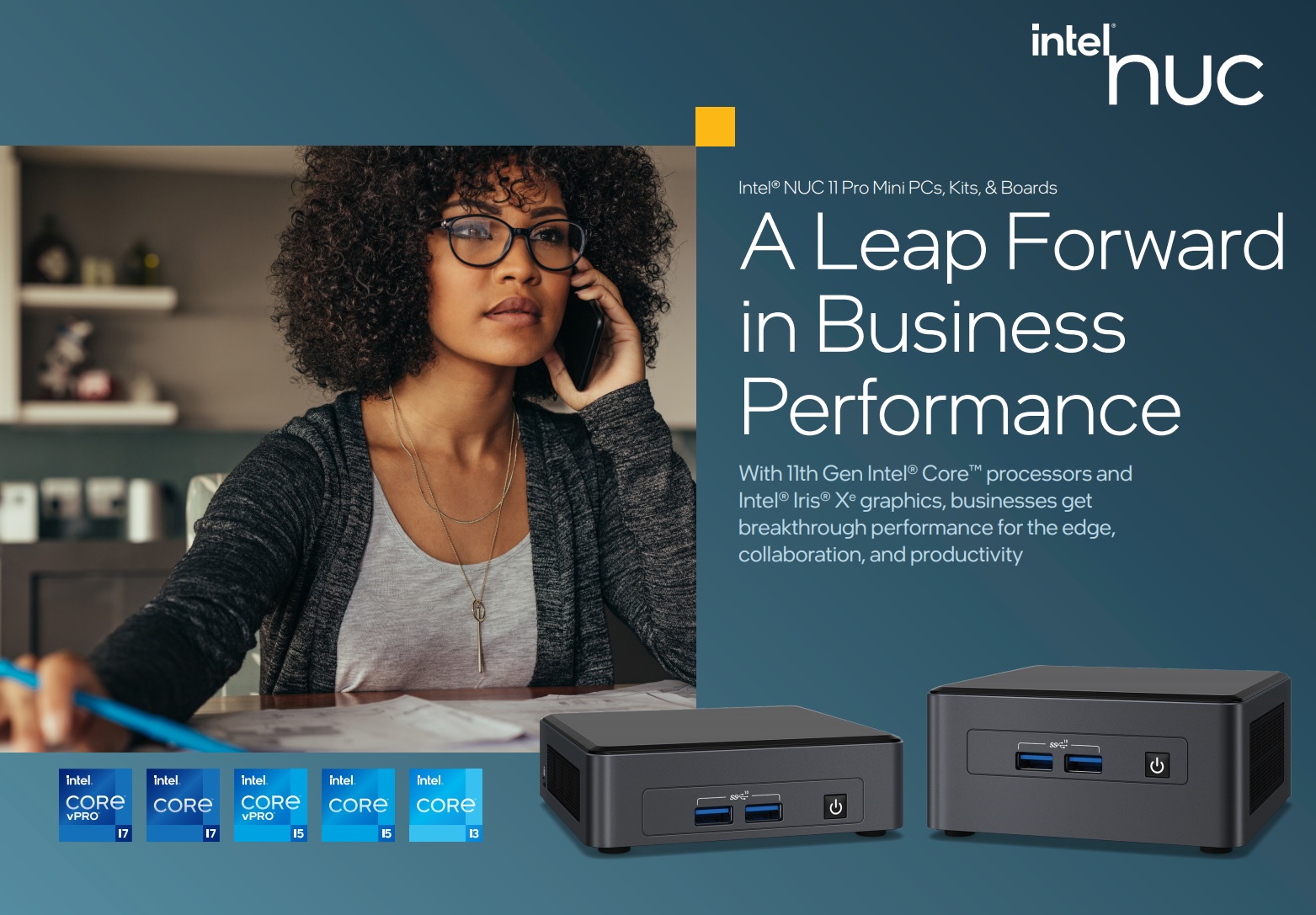 NUCs Intel Are most identified with their compact and cute configuration. While they do not change their shape, the hardware inside and the interfaces continue to vary from generation to generation of Processors. These computers usually include Processors Which is also found in computers Mobile And for you, their heat envelope is particularly low and efficient. All the user has to do is connect them to a screen, keyboard and mouse.

Advanced NUC computers for home and office are codenamed Tiger Canyon. These computers contain different configurations of storage, expansion and processors when using processors starting fromCore i3 1115G4 with 2 cores and 4 capillaries up toCore i7 1185G7 has 4 cores, 8 capillaries and the most advanced graphics core available, theIntel Iris Xe Graphics with 96 graphics processing groups.

It is a combination of the most powerful processing cores of Intel For general calculation along with the most powerful graphics cores Intel has built so far within its processors. This causes NUCs to climb another level of performance compared to what we have known so far in previous generations such as Bean Canyon which were based on architectural refreshes Skylake The veteran.

These NUCs have two interfaces DDR4 SODIMM for up to 64GB of memory. Also, most models are given an available M.2 interface for volume type SSD In the PCIE Express 4.0 standard so that the fastest drives on the market can be utilized, an advantage that comes with the move to Tiger Lake. There is also space for a drive SSD In a 2.5-inch configuration.

Depending on the model, the computer interfaces can reach a very impressive array when there is a part which can be purchased separately that will add a network interface and a pair of rear USB ports. This is in addition to HDMI 2.0b display interfaces, interfaces Thunderbolt 4.0Gbps speeds and ports USB 5Gbps and 10Gbps speeds. 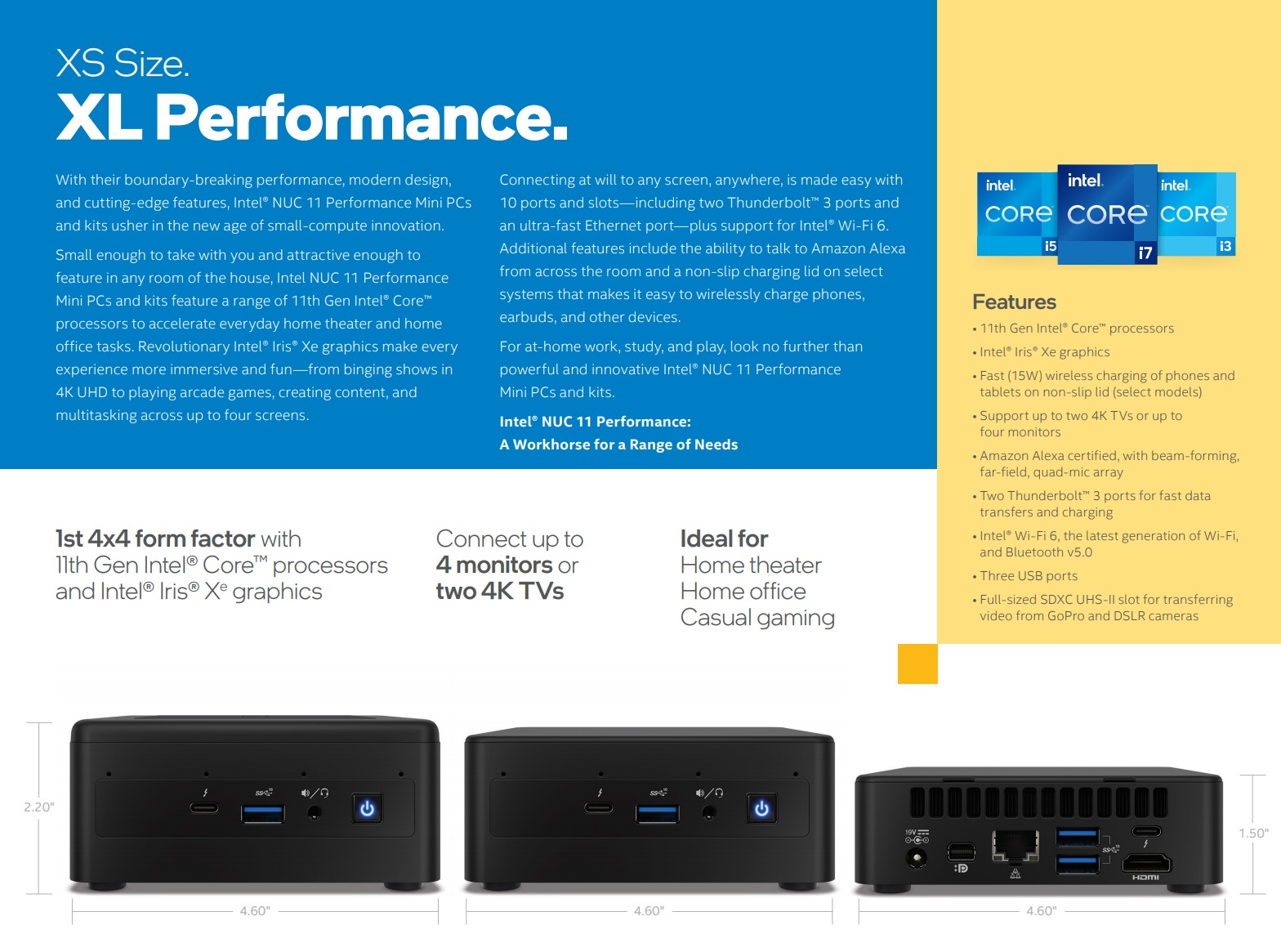 Another family of computers WALNUT That makes its debut is theWALNUT 11 Performance. These computers get some upgrades compared to their standard siblings and are a little more tailored to the content people who want theWALNUT Their will do more.

For example, Performance PCs are capable of connecting to up to four monitors, have a wireless charging pad (depending on the model), an SD card reader with UHS-II support, as well as a high-sensitivity microphone (Far Field) suitable for commands with Amazon Alexa is similar to the technology found in Echo's Echo Amazon herself. The addition of infrared makes theWALNUT 11 Performance also suitable for traditional style signs. 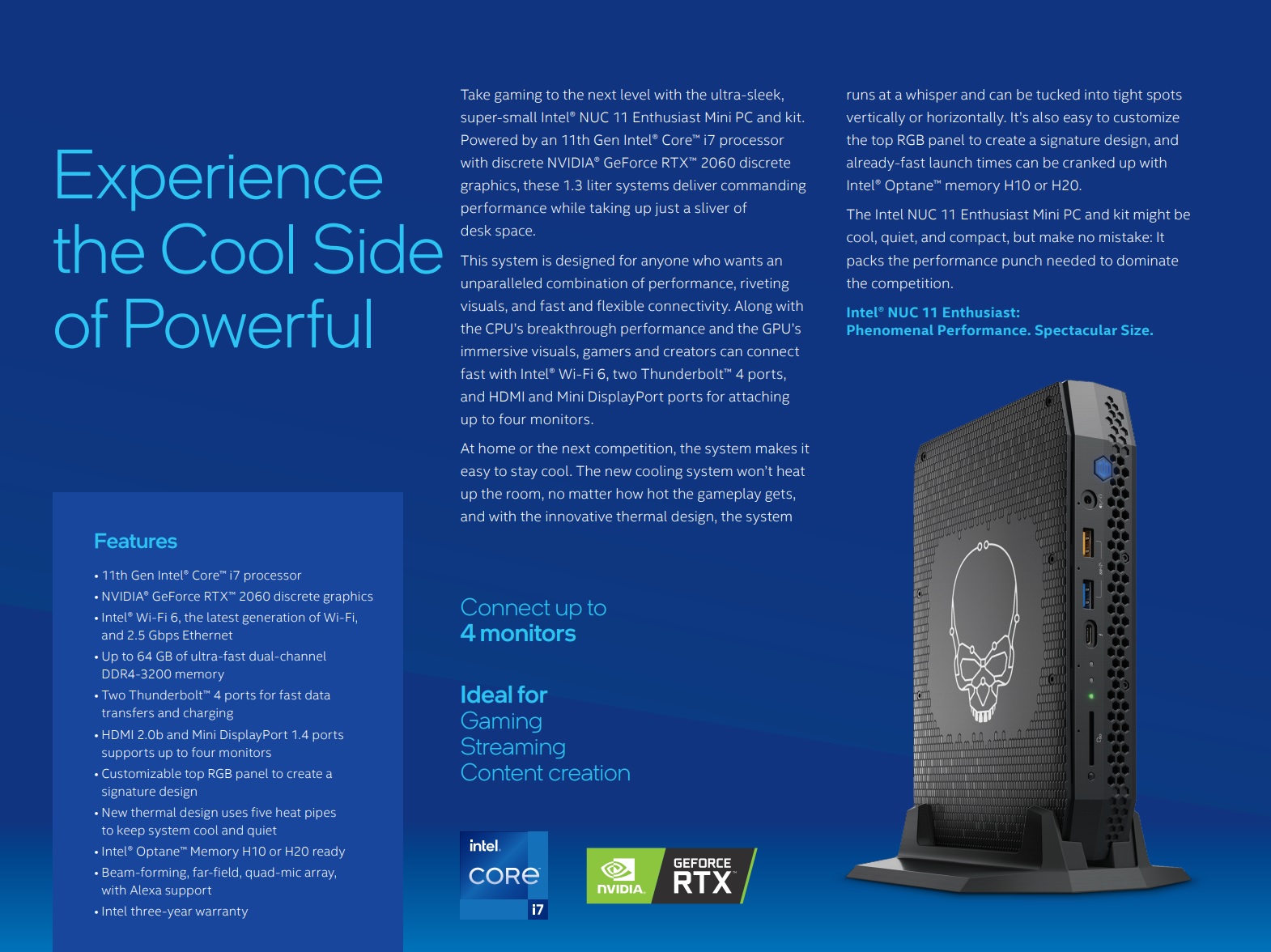 For dessert, a product that interests us more than any product WALNUT Other, because how can it not be - theWALNUT 11 Phantom Canyon. If Intel has a real console, we believe it's the most representative iteration it can have (KFConsole's honor is in its place).

The Phantom Canyon NUC is a natural successor to the Hades Canyon, a computer born of an impossible collaboration between Intel and AMD at the time. This time, Intel decides to spend time with the other side of the graphics camp for laptops when a mini computer with a particularly powerful GeForce RTX 2060 graphics card comes out NVIDIA.

Somewhat surprisingly, the Phantom Canyon NUC contains a Tiger Lake U processor with a relatively modest heat envelope of only 28W, theCore i7 1165G7. This, compared toCore i7 8705G has the 65W heat envelope we saw in the previous model. Although, unlike the general processing power left in the same area, thanks to its reduced power consumption more power falls into the graphics category of this computer. 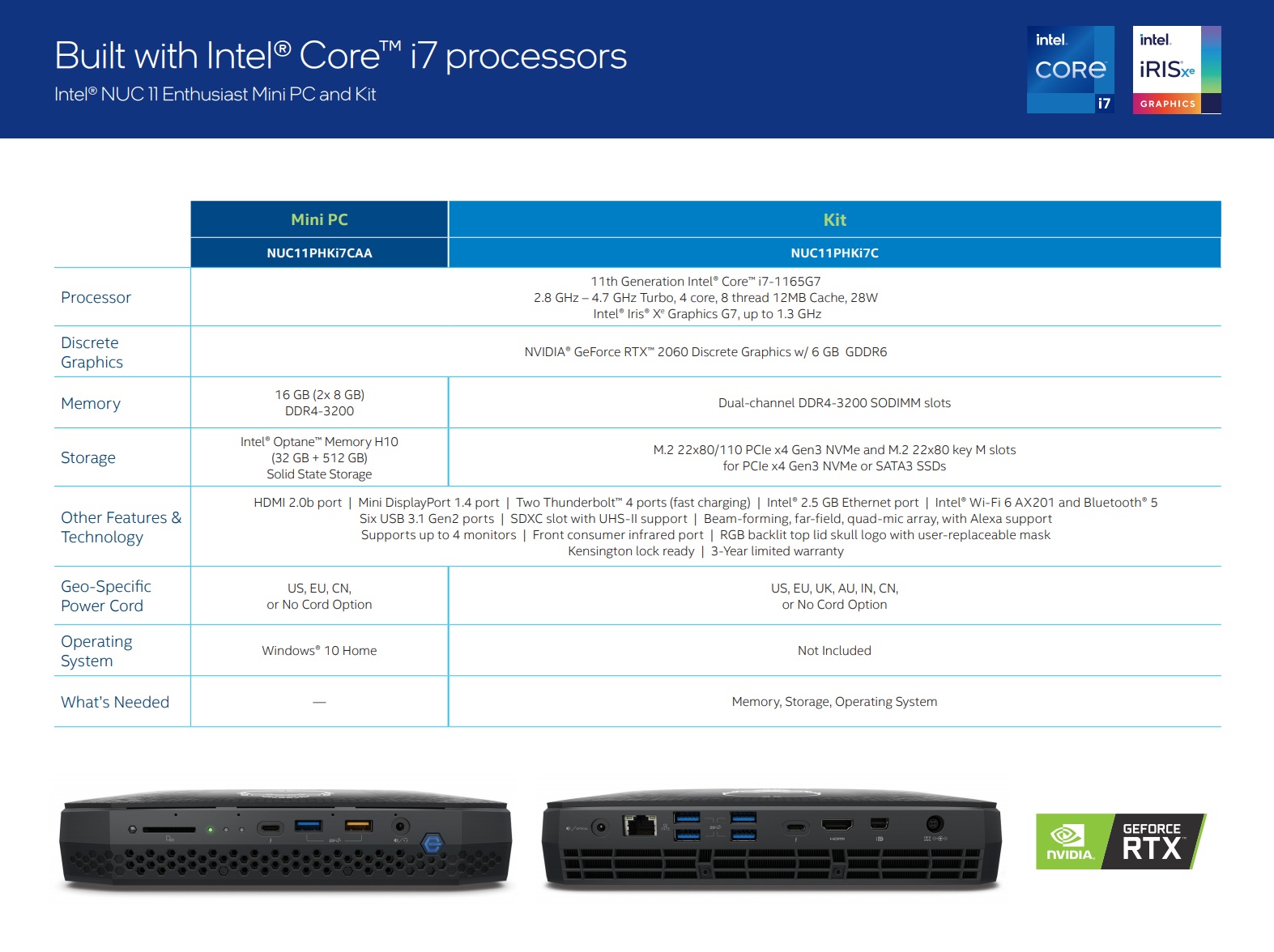 This computer has two graphics cores, where just like in laptops there is a transition in use between one graphics core and another. This built-in Intel will be great for general use, video acceleration and any software that loves Intel QuickSync (accelerated processing using a graphics core). Launching games and software with heavy graphics will use a GeForce RTX 2060 video card NVIDIA Owns 6GB of זיכרון graphic. Currently, there is no complete information about the specific heat envelope of the video card, so do not know exactly where its performance will be between the minimum and maximum possible.

This computer has a pair of M.2 interfaces for SSDs. Surprisingly, despite the use of the Tiger Lake processor these interfaces use the 3.0 standard of PCI-Express and not the standard 4.0. The NUC11PHKi7CAA version will use a simpler Optane H10 drive array that accelerates a 512GB SSD drive probably in the SATA protocol. There are two memory interfaces for a total capacity of up to 64GB of type DDR4.

The Phantom Canyon WALNUT Enjoy most of the features found onWALNUT 11 Performance such as wireless charging, SD card memory interface and the ability to useAlexa.

Lets wait and see what will be the price of this interesting computer, and other NUC computers based on Tiger Lake's architecture Intel Which will land on the shelves in the coming weeks. We also hope to meet the Phantom Canyon WALNUT Close to performance tests and comparison with the previous generation and a variety of computers and hardware configurations.