Intel® Galileo 2: Evaluation for the inventor who starts with HWzone

Intel Galileo 2: An Appreciation for the Beginner Inventor

In 2013 Intel Introduced the Galileo board which contained a 32 bit processor in the architecture of the x86, Based on the technology of Pentium and the first certified by Arduino.
Galileo board of the company Intel Addressing mainly the growing community of mikakers in Israel and around the world.
It offers most of the advantages of the Arduino board and also allows running an operating system such as Linux, similar to Raspberry Pi and more recently Windows, Which gives the developer a very wide range of options that were not available in simple tables such as the Arduino.

Galileo 2 is the second panel in the series and does not offer any improvement in CPU performance, but rather fixes and improves a number of issues from the previous version of the support sample. 7v-15v power supplies, physical modification of the RS232 connection from the connector headphones 3.5mm for more common PoE (Power over Ethernet) and more.

What's in the box? 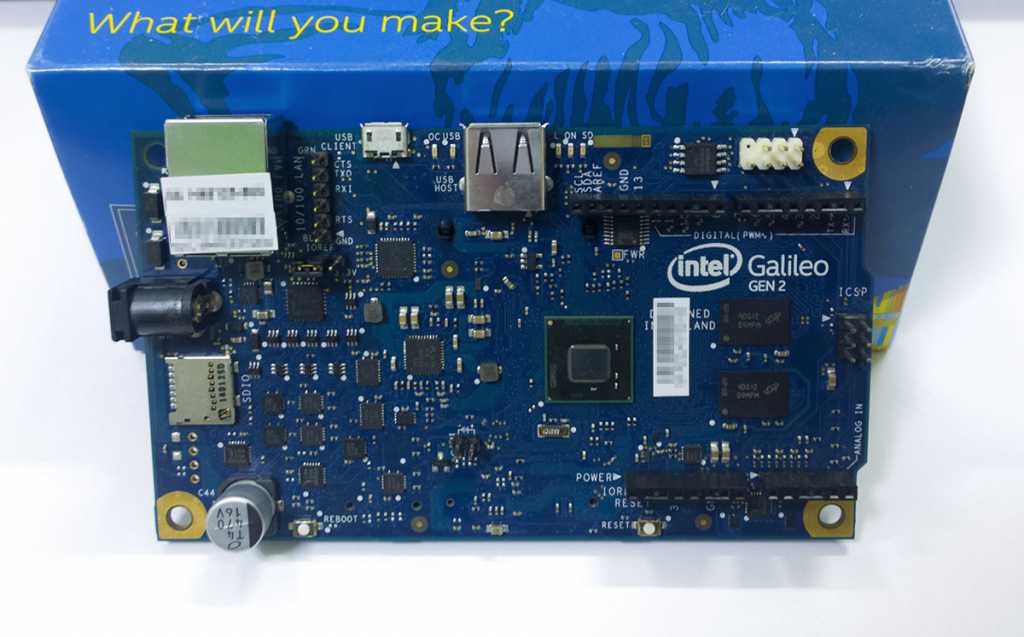 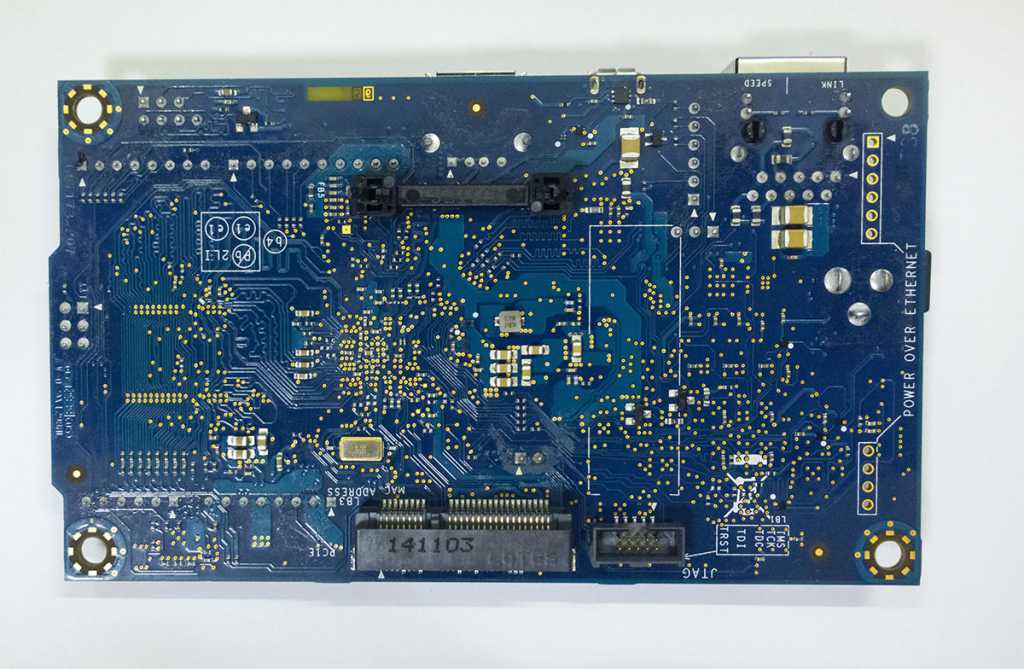 At a glance at the board we can see that the pin connections are compatible with the Arduino board connections and allow the use of Arduino Shields (Arduino Shields).
Between the pins we can see the Quark processor Intel. 32 400 bit processor with 86MHz speed that can run xXNUMX applications. Next to the processor are two memories DDR3 Total volume of 256MB.
Connection Network At PoE speed of 10 / 100 Mbps that allows the power supply to the board via the network connection (assuming you have the appropriate equipment to "inject" voltage into the network cable), thus allowing the board to be placed where you do not have a power outlet.
The board also contains a Mini PCIe x1 connection that allows the connection of cards Mobile phones, WiFi, Bluetooth and USB connection to host 2.0 for connecting to various devices such as camera, Keyboard, mouse and so on.

Like the Arduino table, here too we can find the standard arrangement of the pins when:

The Internet World of Things (IoT - Internet of Things) is developing and gaining momentum in the past year or two thanks to cheap hardware, both in price and in electricity consumption, which enables the company to connect many products to the Internet smart House Or monitor remote sensors.
Galileo 2 allows fast and simple connection to the Internet either through the wired network port on it or with an additional WiFi expansion card Mobile phones.

The board allows Development In a wide variety of tools and languages, so it fits a wide range of developers, whether it is an amateur developer who knows only the Arduino environment or whether it is an advanced key that can integrate several capabilities including Python, JavaScript with Node.js, C ++, C # and more.

Out of the box The panel fully supports Arduino's development environment when it is necessary to download a suitable environment for Intel boards. The environment can be Download directly from Intel website.
The current version 1.5.3, obviously suitable for all operating systems similar to the original version.
The Ethernet expansion library supports the network card on the board without any modification,microSD on the board.
Using the USBHost library,USB Built-in commands to read keyboard / mouse attached to it.
If an operating system runs on the board (using a microSD card), you can use the system () command to run programs directly from the operating system.
For example, displaying the network card data on the Serial Monitor with a simple command: system (as "ifconfig eth0> / dev / ttyGS0"); Sends the output directly to the serial port of the board. 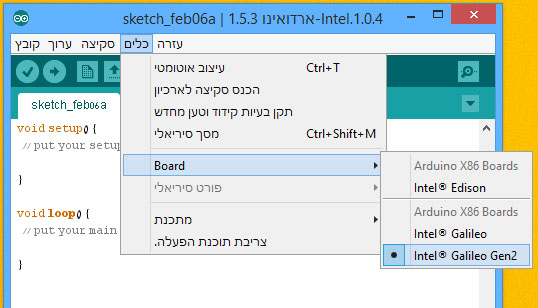 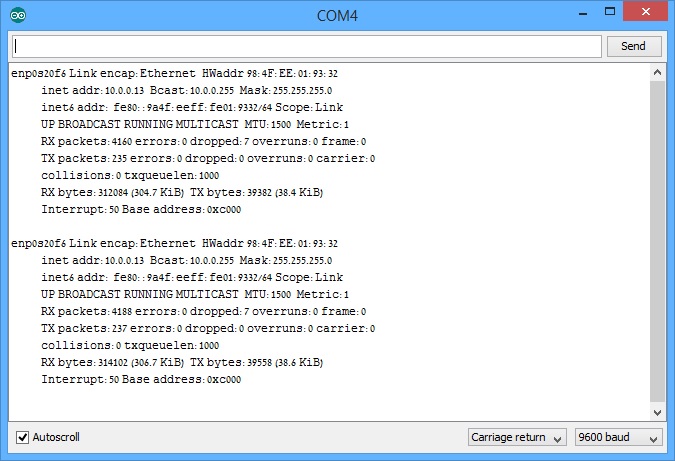 On the Intel IoT page You can find tools, guides and code.
In order to take advantage of all the capabilities of the board, you must install an operating system that is compatible with embedded systems. Intel has created with the help of Project Yocto A Linux version is optimized for a clipboard that already contains a number of tools Development And API pre-installed.
The image can be spread on the back of a card microSD. When the board is activated with the card inside it will recognize it and try to make a bot from it. If the image is successfully deployed the operating system will go up.
Since the board has no video output, it can not be connected to the screen, so you need to use the cable USB to TTL and connect it to the designated pins in the vicinity of the network connection.
Using simple terminal software such as PuTTY Will allow you to see what happens during the board's climb.
Another option is to connect the board to the home network with a cable Network And wait until the panel appears in the list of computers on your router. The OS can then be accessed using the ssh connection as well with PuTTY. 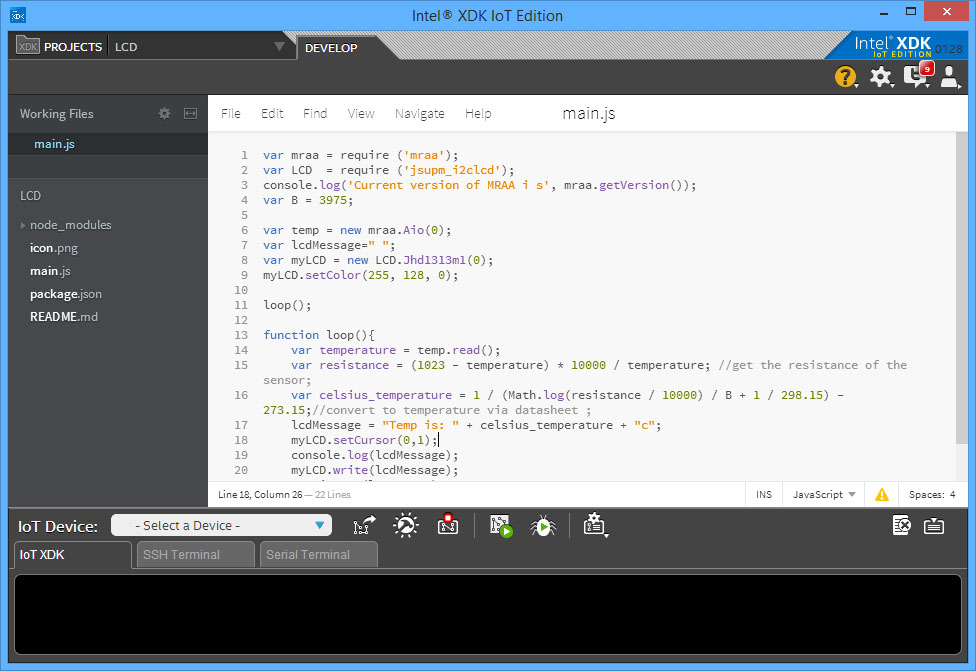 A graphical development environment similar toscratch Which sells from the "Raspberry Pi.
The environment allows Development Using the browser. This is a great tool for novice users and those who want to achieve results quickly.

You can also download the Eclipse development environment that already contains an API in C ++ for development for Galileo.

Microsoft realized that the world was moving toward and production And did not remain indifferent to the subject.
The company offers Development Plan for IoT And after a short registration you can download an image containing a version Windows Adapted to Galileo. Installing a plugin for Visual Studio allows Development With debug options while running directly from the development environment.
Because this is about Windows 32 bit to talk can be developed and run programs designed for windows (without GUI) in the Dot Net environment.
The site can find several examples for Galileo and even a guide to installing Node.js in their operating system for users who want to take advantage of operating system capabilities Windows And simple JavaScript.