conference CES 2021 It officially opens, this time in digital format, and the American chip giant is aiming higher from the first moment - this year we open with a quick launch and a promise of many more models along the way.

Intel wants 2021 to be particularly successful, and now announces a new series of Processors For gaming and productivity for computers Mobile Lightweight. 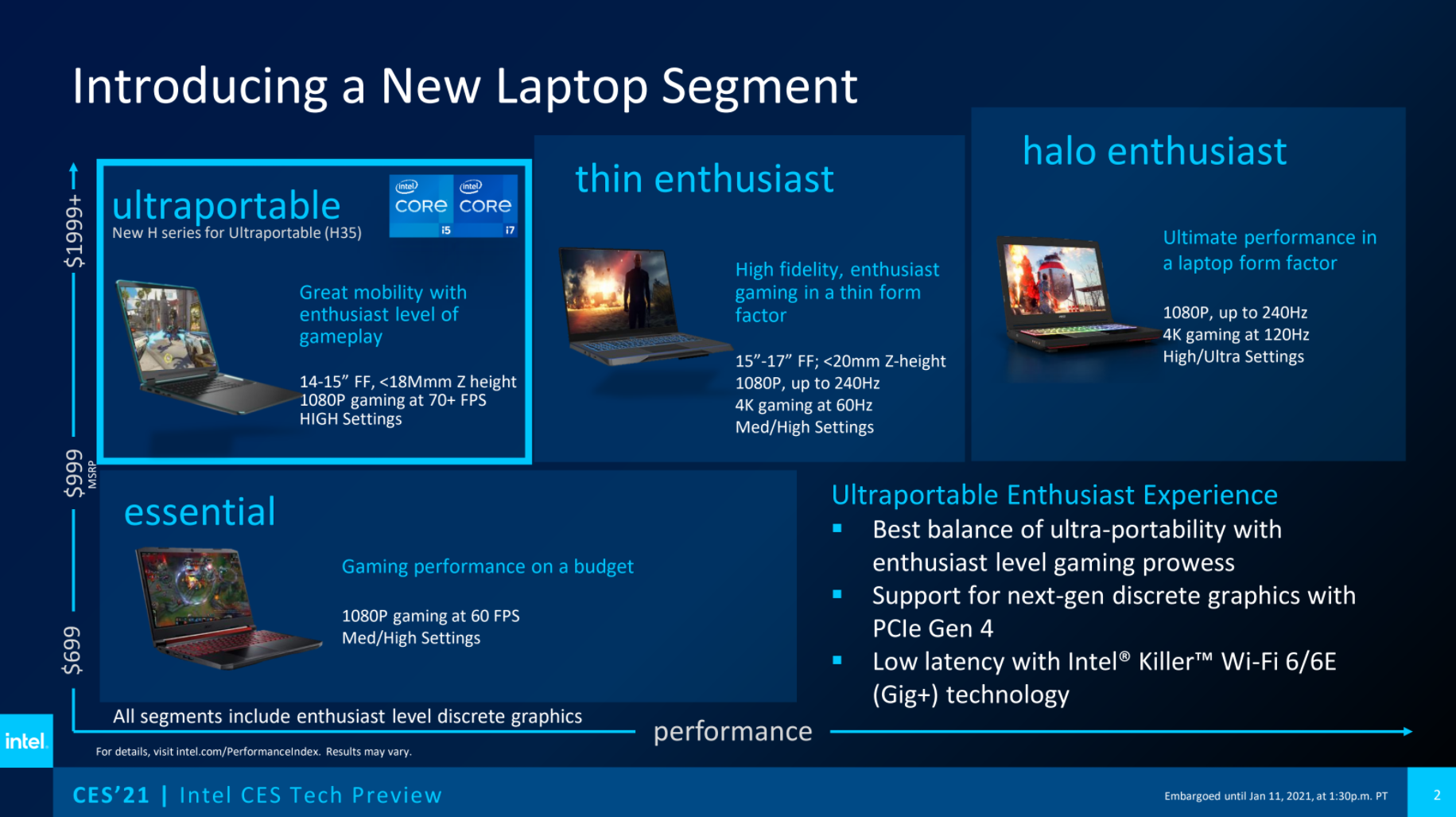 Similar to the "ultrabook" world she created, now wants Intel Create another category of laptops, the "Ultrapotable". This category also has a new code name - H35. Intended by Intel Is that this name will be used for ultra-light gaming computers, and also thin by some definition. It seems that the main reason for having such a category is for users who want a combination of work and entertainment, a computer that can be used for gaming but will not be particularly large and heavy. 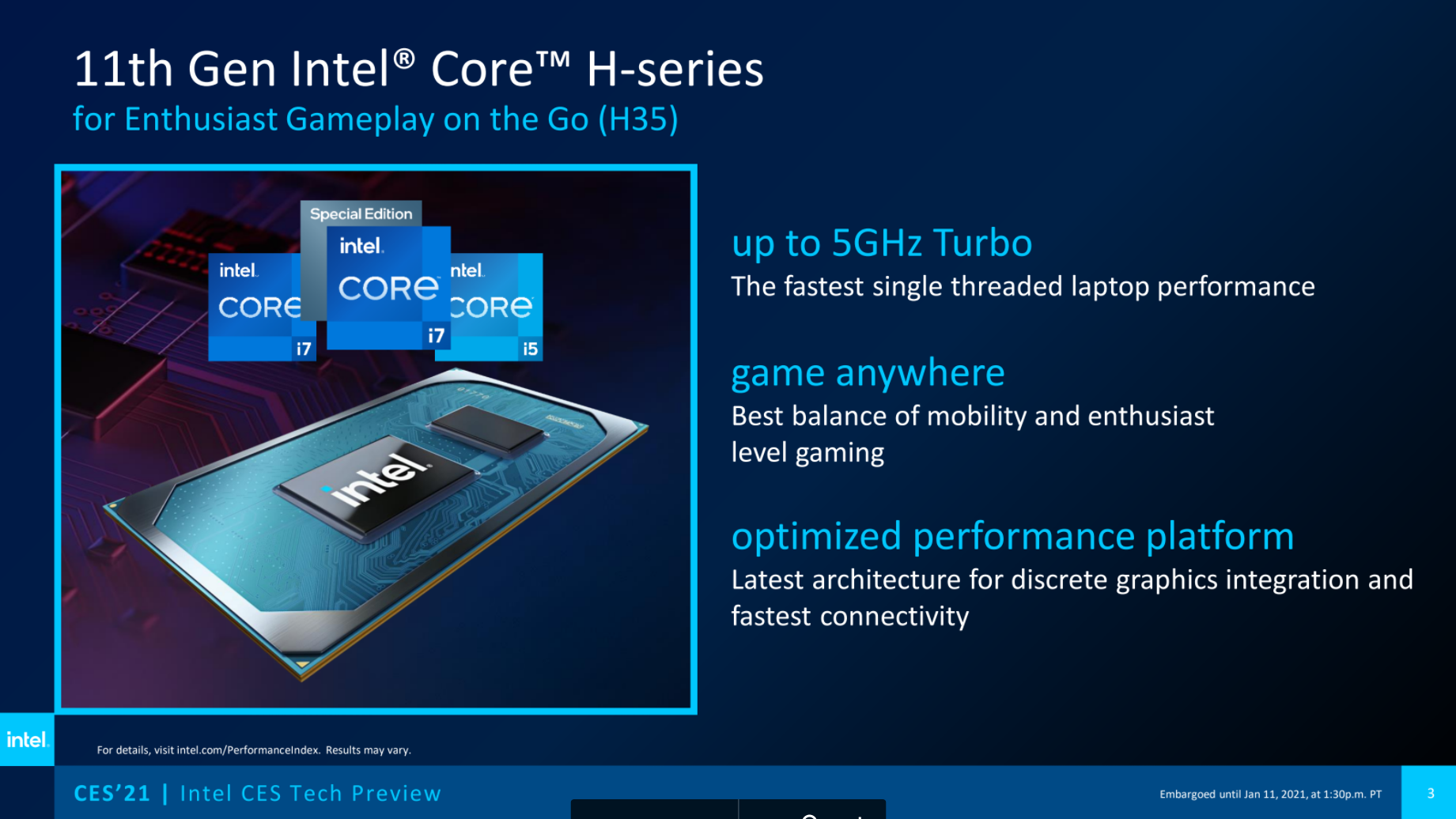 The engine behind these computers is none other than Tiger Lake's Intel, Considered to be its most technologically advanced. Processors These are manufactured in an advanced 10 nanometer procedure, and contain Core Powerful graphics alongside four main processing cores that are considered the fastest today in the world of CPUsx86. 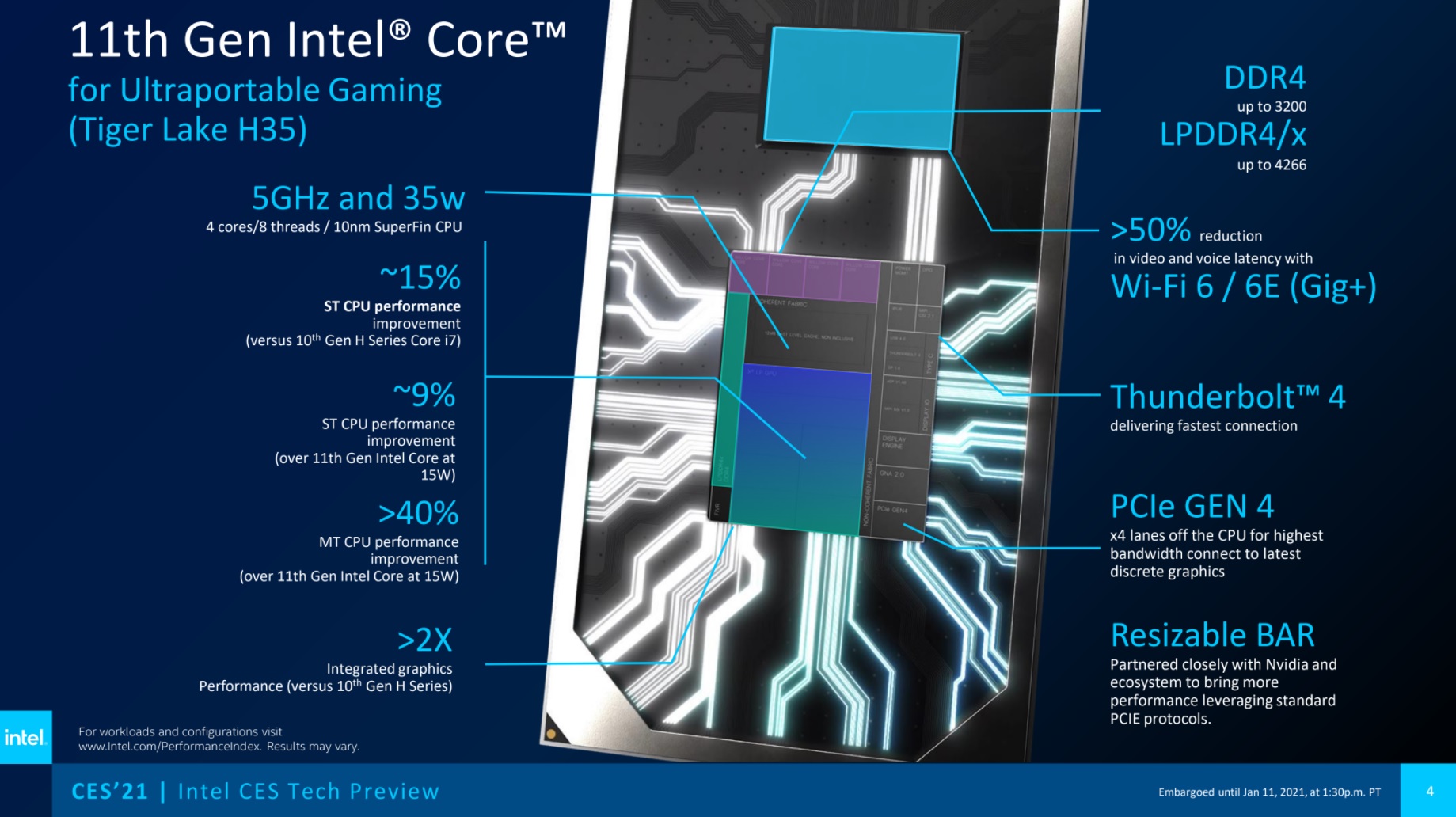 The same technologies that have existed so far in Tiger Lake's processors Intel Will also be available in the new H35 Series processors. There is an option for standard DDR4 memory, or faster LPDDR4x soldered to the printed circuit board. Intel Claims an improvement of 15 percent performance for a single core compared to the corresponding 10th generation. Also, a 9 percent improvement in single-core performance over processors Tiger lake Themselves launched so far for a 15W heat envelope. 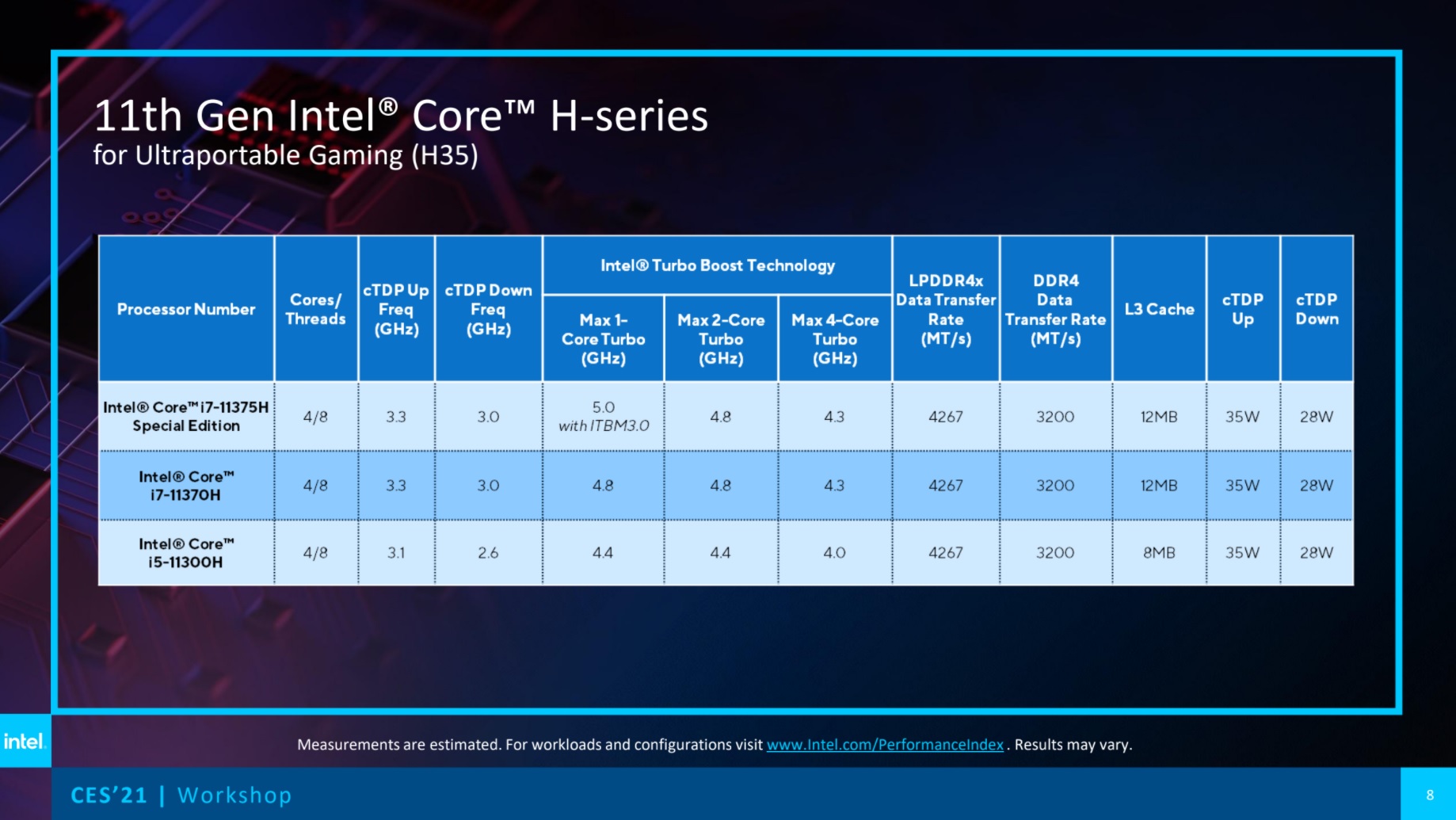 The new Tiger Lake H35 series opens Intel In three new processor models. All three still contain the same 4-core, 8-core vehicle we've known since the launch of the initial Tiger Lake processors (Core 11th Core for laptops). It's actually the same silicon, only now it has higher operating frequencies. You could say that Tiger Lake's Intel Wins for the first time to retire and adapt to gaming through higher operating frequencies.

God-Core i7 11375H is a special version processor simply due to the fact that it is capable of reaching a frequency of 5GHz for a single core. Core The i7 11370H which is expected to be slightly more common reaches a maximum frequency of 4.8GHz. Another processor in the series is theCore i5 11300H which contains 8MB of זיכרון A third-level cache compared to its big brothers' 12MB, and also slightly lower operating frequencies. The new heat envelope can be 35W or 28W, depending on the laptop manufacturer.

Intel seems to take a lot of responsibility for the core speed of the CPUsTiger lake Its H35, given that competition can come with a higher number of cores, but these may be slower compared. 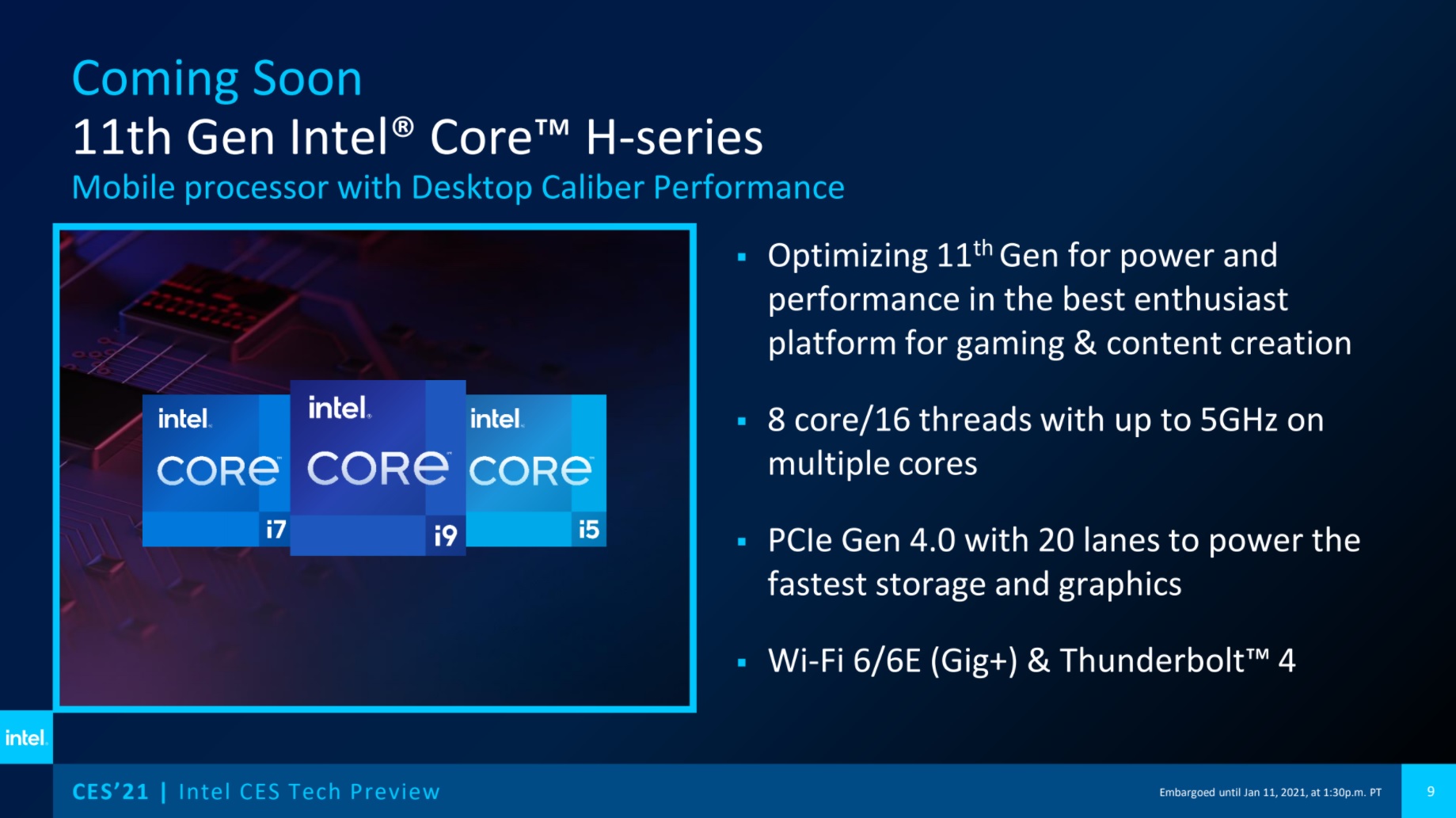 We do not remain without promises for future products, when Intel Gives a teaser for Tiger Lake H Core i5, Core i7 and also Core i9 processors We are soon to see Processors With 8 cores and 16 threads, which will allow Tiger Lake architecture to reach for the first time truly serious heights for productivity and gaming in computers Mobile. When in battle? Hard to know, we do not even get a general date. Hopefully for the benefit of the general public these processors will arrive soon and bring new blood into the world of advanced laptops which is becoming increasingly competitive and tough lately.