Intel at Computex 2021: More from Tiger Lake and also a formidable NUC computer

Early morning kit Intel Its press conference for the Computex 2021 exhibition, which is also taking place almost entirely digitally this year. Intel Decided that at least for this event it maintains modesty in the announcements and repeats the same mantras it introduced when launching Tiger Lake U processors in a 10 nanometer process for computers Mobile. 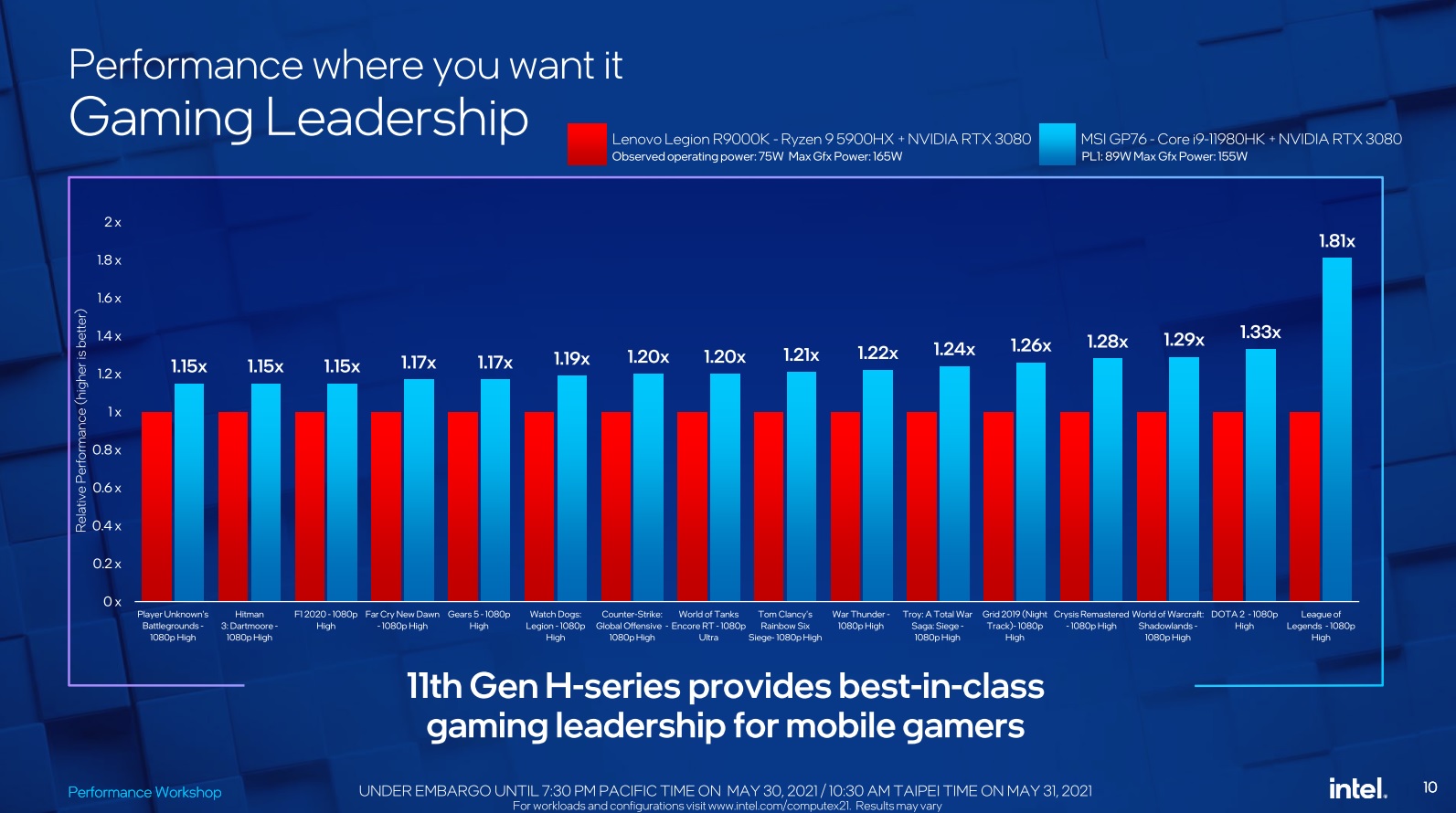 First we have the advanced gaming processors of the world of laptops, where processors such as Core i9 11980HK compete with Ryzen 9 5900HX's AMD. This is two Processors With 8 cores and tremendous processing power for mobile workstations and top-end gaming computers.

While for many global media outlets this seems to be quite true, it is important for Intel to emphasize that its 11th generation gaming processors are considered to be the fastest for gaming. It demonstrates this mainly in direct comparisons with laptops in which the heat envelope for processors AMD Lower at the expense of a higher heat envelope for video cards. 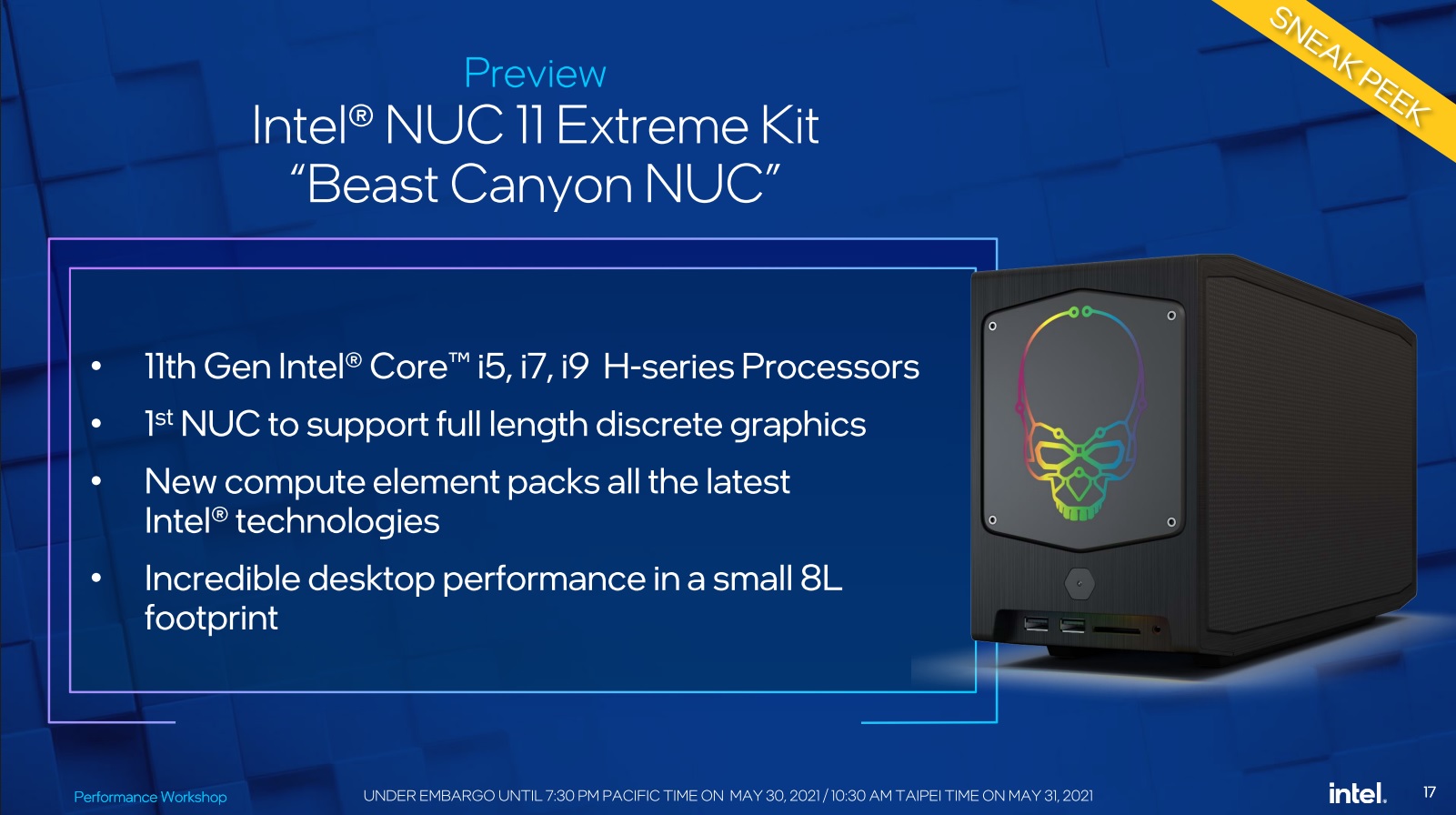 This platform is interesting enough and powerful enough to ignite in Intel the idea of ​​producing a new mini-computer based on 11th generation processors. Specifically, these are the same H processors with respectable heat envelopes. The Beast Canyon NUC of Intel It is expected to be a computer that all the user will have to do to use it for gaming is install a video card. In the future we will know more about which graphic cards Match and what the machine looks like flesh and blood. Very interesting. 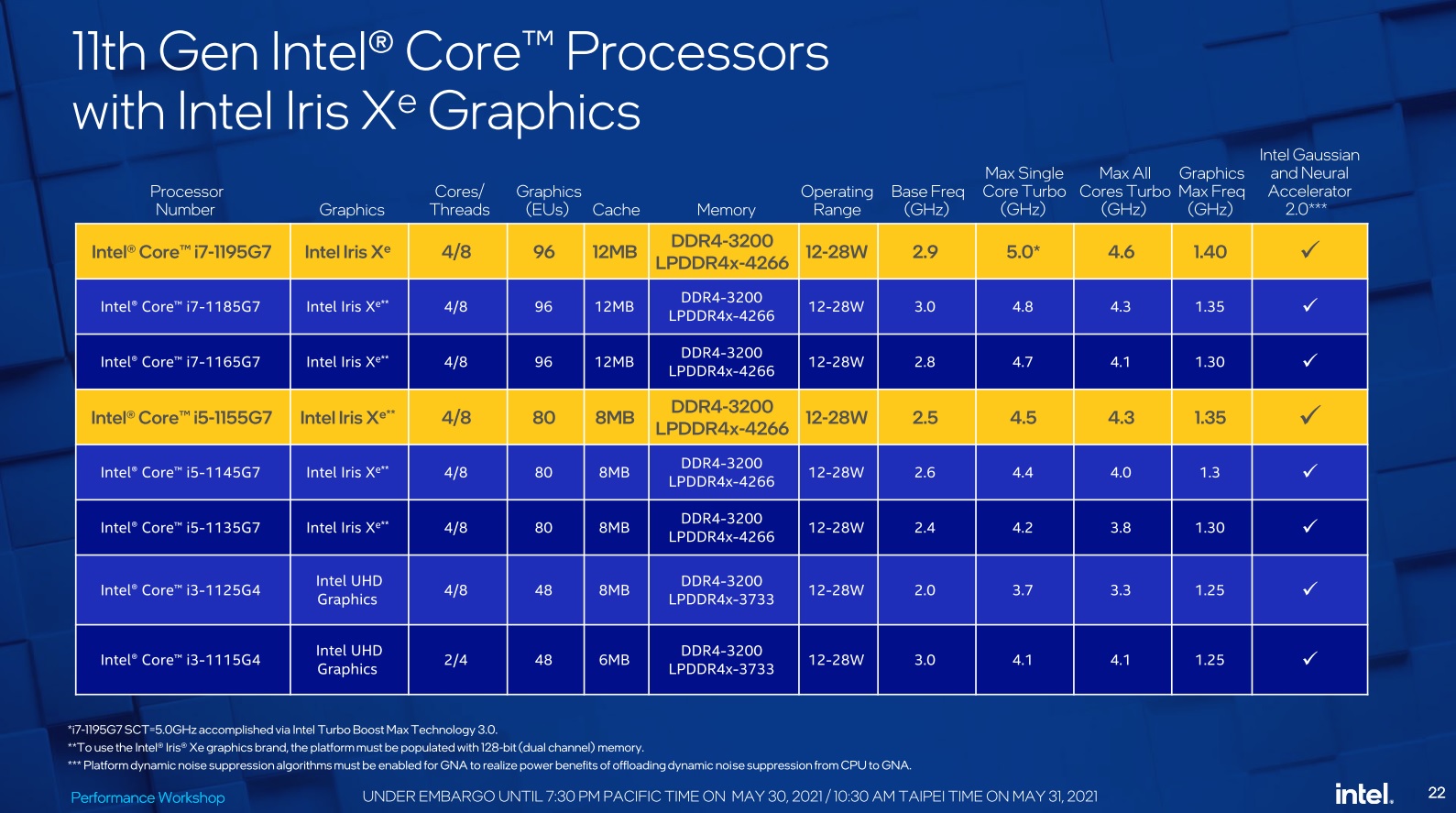 In the category of thin and light computers, the Tiger Lake U family of Intel Gets two new processors. There is a new performance carrier for the Core i5 and one for the Core i7. The Core i7 1195G7 is the first U processors of Intel Which is capable of reaching a working frequency of 5GHz for a single processing core at effort. Of course it very much depends on conditions like the type of load and the working temperature. The heat shell that can be defined by the manufacturer remains in the range of 12W to 28W.

The Core i5 1155G7 is a new processor for the mid-range mobile market that the big difference between it and others we have seen so far is a higher working frequency as well for the processing cores and graphics core. Memory support for the entire platform remains atDDR4-3200 and LPDDR4x-4266. 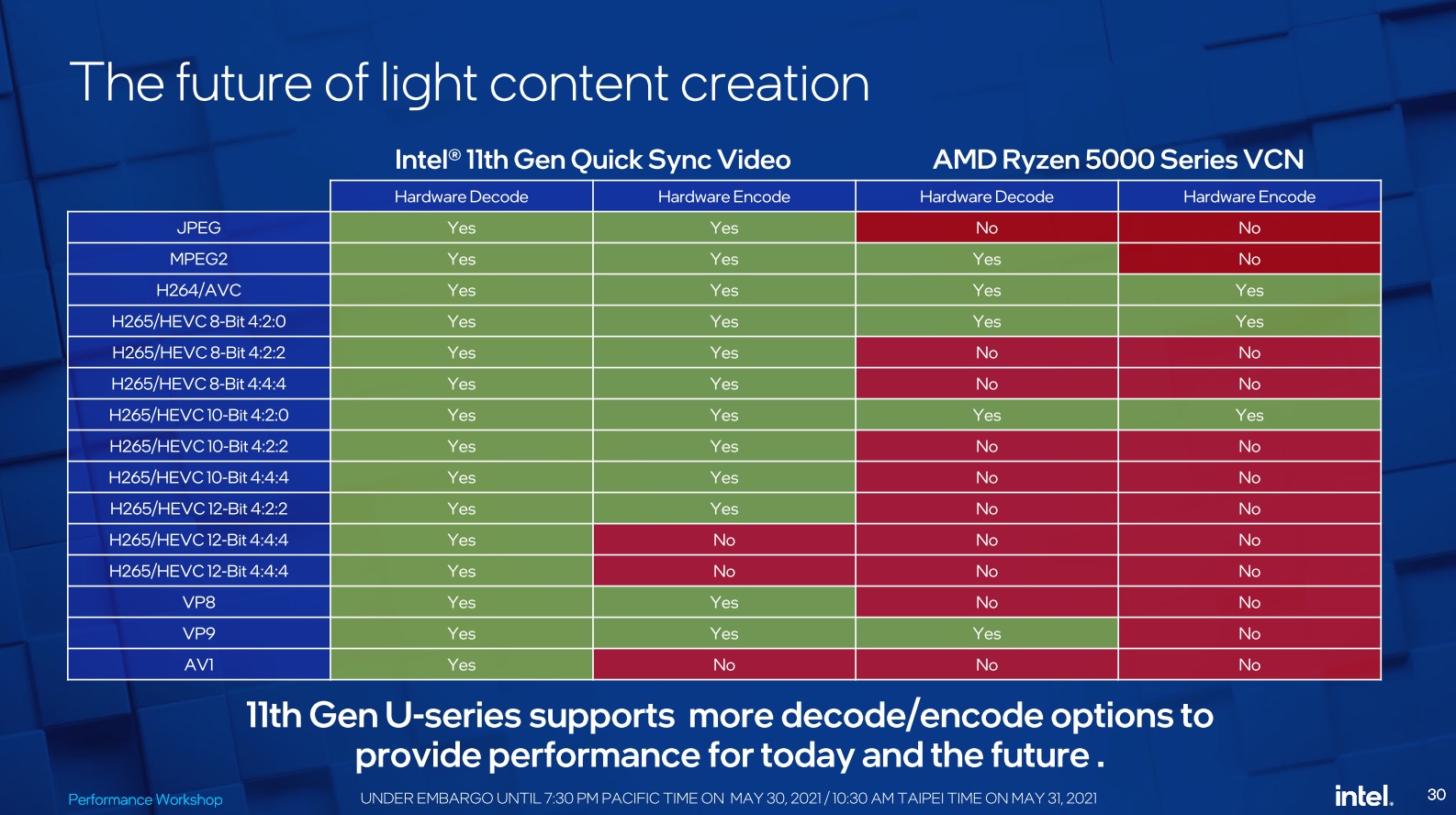 It's important for Intel to emphasize, and we rightly think, that the graphics core of its Tiger Lake U processors is not just another built-in graphics core with a poor set of features. Today, Intel's 12th Gen Graphics (known as the Xe Graphics brand) is the only graphics core that supports media decoding of all common types. This significantly helps in editing video content in the various programs. Specifically, the H265 10-Bit 4: 2: 2 content that is becoming popular among state-of-the-art digital cameras is exclusively supported in decoding with Intel's graphics core in the world of today's accelerators. Even with graphics cards for gaming NVIDIA There is still no acceleration through deciphering this format. 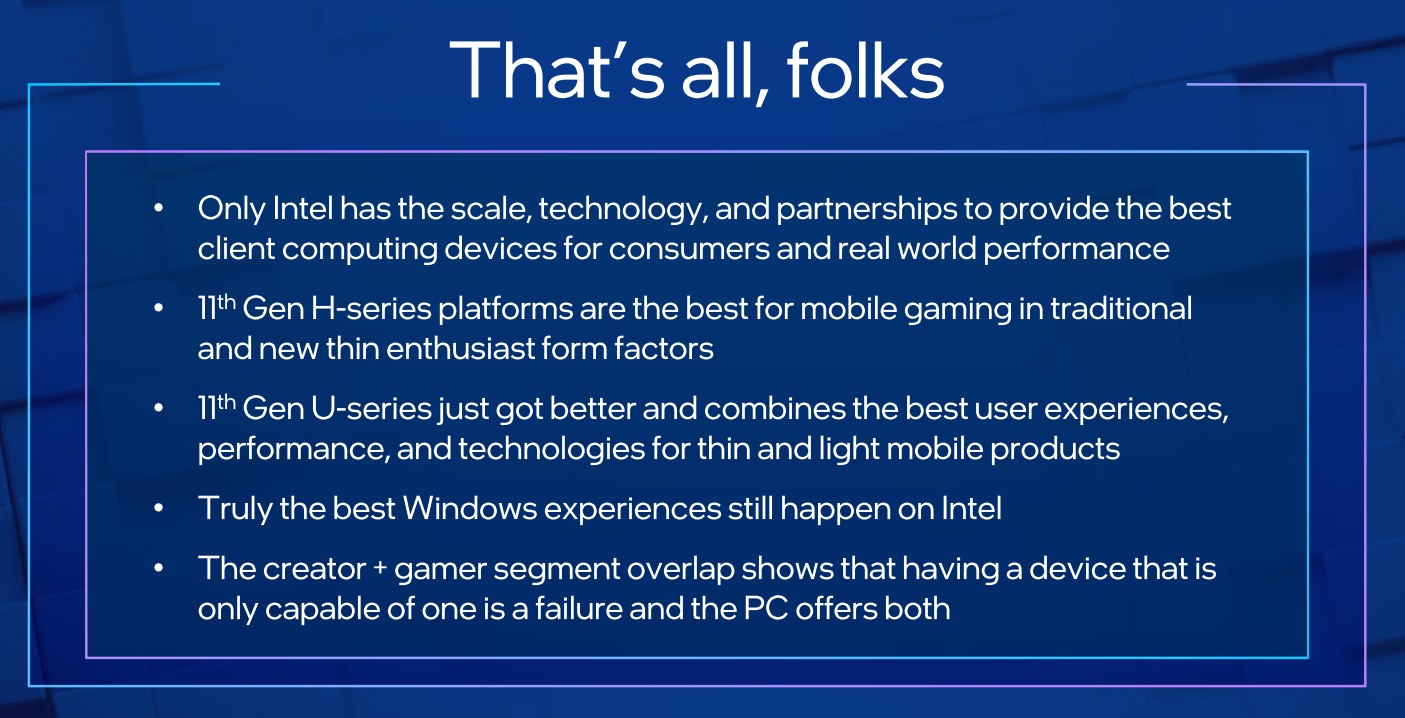 This year at the Computex show we did not see any sensational news from Intel, even though it has a lot of products in line and design. It is very possible that Intel Waiting to hold its own events later this year for those important products.

We have not heard anything about the graphics cards dedicated to gaming and productivity from Intel, the same Xe Graphics HPG products that should come to fit desktop computers in the fierce competition between NVIDIA To-AMD Name.

Yes we heard a bit about Alder-Lake processors and the new desktop chassis that is expected to hit the world air later this year, or at most early next year. You will find information about this in another article that will be published very soon

We are confident that in the coming weeks more information about these important products will begin to arrive, the purpose of which is to try and make significant changes in market perception and competition.