It's important to know: the structure of AMD Ryzen processors and their impressive flexibility

There is no doubt that AMD's new Ryzen processors are launching A water that many had been waiting for. While they do not bring computing power that has not yet been seen for the most part in the computing world, they achieve better value for many kinds of PC usage. Eight processing cores with a price tag of 329 dollars Is something we have not yet seen in a new generation of Processors And certainly sets a new standard for what we deserve to receive such a price.

In this article we will focus on what makes the new architecture, Zen,AMD Serve many users in the world. From users who are all accustomed to surfing the web and writing games through Gamers To workstations that need such processing.

Zen - A single processing unit dictates the intensity of the rest 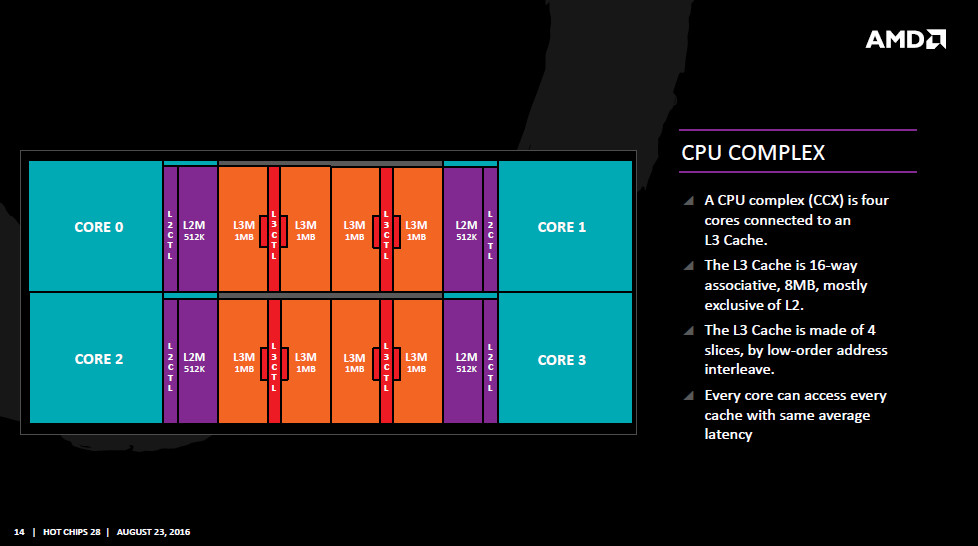 Here is a diagram showing how a single Zen processing unit looks. This unit is also known as CCX or CPU Complex. It includes four processing cores, a second and third-level cache. Along with these, the SMT or Simultanious Multicore Threading function also works. This is a function very similar to what we know as HyperThreading in processors Intel And it creates additional logical cores for all Core physically. Thus, this unit has 4 physical processing cores, and four additional logical ones.

This architecture is produced by 14 nanometers in Samsung and Global Foundries. This process is considered to be the most advanced right now to this side of Intel In the 14 generation the nanometers. By the end of this decade, we are expected to enter an era of 10 nanometers that will allow the compression of more transistors per area, just like the current process does.

The glue that connects everything - Infinity Fabric

Now that there is a finished processing unit, one has to worry about what is called in the industry "Scale-ability" or scalability. Taking this individual unit and adding additional units to it to create significantly more powerful processors. She did so AMD In its new series of Ryzen 7 processors. Processors These are based on two processing units, or two CCX if you will. Thus, the processor contains 8 processing cores and 16 capillaries.

The memory is of course DDR4 and its minimum speed is 2133 MHz. Today, with advanced motherboards and updated buffers, there are reports from users who are already able to run Ryzen systems on 3200 and even 3600 megahertz at memory speed, as well as in Infinity Fabric. In the near future, software and hardware updates are expected to bring a significantly higher average memory speed to the new platform AMD, Which at first did not have high memory speeds like those of Intel.

The reason for the name Infinity Fabric and the great technology

Our followers Remember this new thing for sure. Processors RYZEN 7 has just been launched and the company already has an appetite appetite to conquer the server market with more 16 cores and processors. The way to do it? Well, Infinity Fabric. As the name suggests, more and more processing units can be connected to each other through this miraculous bridge.

To this day automakers Processors Have taken perfect part of architecture In the home processors market and cut it accordingly to enter the simpler markets. Here, in fact, there is one building stone that enables the addition of additional buildings to create a structure as large as possible.

The only thing that actually stops 32-core home processors from becoming a reality today is of course the projection of such an amount of processing units - heat and surface emissions onto the silicon surface. Don't get me wrong, Ryzen's processors AMD They are effective, very effective. True, they also have their own heat emission and compression of more processing units means significant heat emissions.

Nevertheless, we see that processors for the home market with 16 cores and 32 capillaries will soon become a reality thanks to Infinity Fabric and a relatively direct heat envelope of 180 watts. To remind you, AMD Has already launched home processors such as FX 9590 with a scandalous brown shell of 220 watts. The improvement in efficiency since this processor, which was the latest flagship of AMD, It is possible to measure already by multiples because it is large.

The future of Zen In the home market

In the near future processors with four processing cores from home AMD We are going to try and take as many potential customers as possible for the chip giant Intel, there is no doubt about it. With price tags of 200 dollars and less, they also have a very good chance of doing so. In addition, it should not be forgotten thatAMD Also contains the division Radeon Inside it will soon be seen as well Processors Which are actually expected to serve the largest market share today of PC users - those who need a graphical core built into the computer system.

Before many rush to respond "This is Intel's end!", Let's not forget Chipzilla. The chip giant Is also planning a serious refreshment market Processors The domestic soon. The nearby Cannon-Lake architecture promises improvements in planar processing power (intensity) Core ), And Coffee-Lake at 2018 will also add parallel ones with six-core processors to the home market.

No doubt comes toAMD Credit for adding coal to the steam train performance of the computer world. After a series of modest improvements from home Intel, Which has been without enemies in the market for quite a few years, there is a change that may soon affect the skeptics.