It is not easy to be at the top: Apple reports first-quarter revenue decline from HNzone

The giant from Coopertino reports another quarter with huge revenues and profits, but still gets a cold shoulder from investors and experts

It is not easy to be the queen (of income and profits), and that is what she is learning about her flesh Dark The big one, which reported revenues for its second fiscal quarter of 2016 (which is 2016's first calendar quarter) - with revenues of about 50.5 billion and a net profit of about 10.5 billion, which nevertheless did not meet market analysts' expectations and lead the company to report Declining revenue over the same quarter last year, for the first time since 2003.

The tremendous journey the company has made in recent years, with the launches of the iPhone, iPad and new PCs all bringing steady record-breaking revenues as well as total revenue, has accustomed the world and investors to a pink reality, and now reaching a certain saturation point in the sales of the top products is inevitable Of the balance sheet - perceived throughout the economic circles as a "failure", although it is still one of the best results you can find in the entire world. 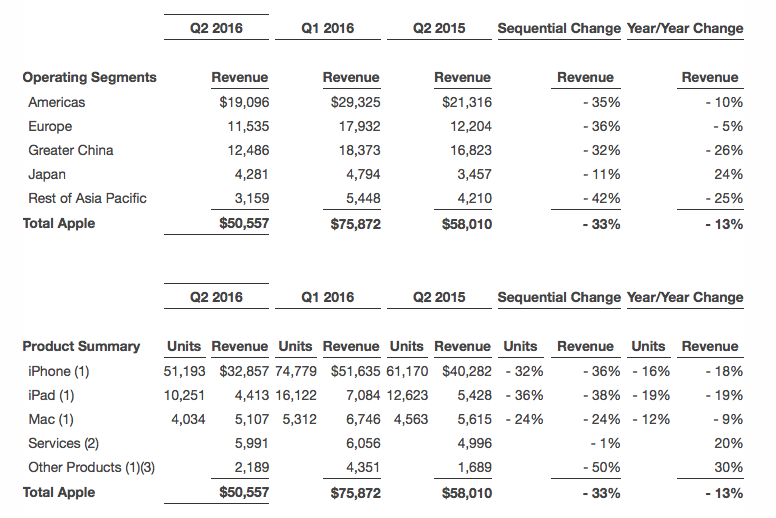 Apple managed to sell about 51 million devices iPhone 2016's first quarter, up from almost 75 million in the final quarter of last year and about 61 million in QNUMX's first quarter - a sharp decline that probably indicates that people around the world see fewer reasons to upgrade their smartphone frequently, or already Willing to pay 2015 dollars and above for it.

This performance of Apple gives Samsung the potential to significantly increase its gap in the market top (with sales of about 81 million smart devices in the first quarter of 2016), and is expected to be the start of a trend that will continue in the coming months for the giant company Cupertino - Despite the launch of the iPhone SE Mosel Last month, ostensibly.

So what does the future hold for Apple? The company will continue to "disappoint" its investors in the near future, but promises to be in the process of developing new products to help it return to its record-breaking path in the not too distant future - are these smartphones here? Technologies for the realm of virtual reality? Sign in to The world of streaming video content online Or maybe even The smart vehicle that the company's people seem to develop? In the meantime, we can only try to predict, based on countless rumors and leaks we have encountered recently, and will undoubtedly continue to see in the near future.


Wait, there's more!
Join To the group of zon And you can receive exclusive updates on various offers on the net, share content that you find interesting, consult with members of the site, and more - Join now!
Tags
Apple iPhone iPhone
Share
Facebook Twitter LinkedIn WhatsApp Telegram